Summertime in Montréal is festival time, that's no secret. What makes Montréal festivals unique is that each one reflects an aspect of the city's own creative culture and diversity – with major doses of international flavour. From May through August, join the summer fun at the Festival International de Jazz de Montréal, Just For Laughs, Osheaga, MUTEK, Nuits d’Afrique and many more festivals spanning music, the arts and even pro racing. Read on to make your plans with our guide to Montréal's summer festivals.

In the month of May

Chromatic Festival (May 10 to 17) An art gallery, conference and party in one, Chromatic celebrates creativity in a range of art forms, from multimedia installations to interactive performances. Check out the forward-thinking festival's exhibitions, shows, kids programming, talks and workshops, late-night parties and more, all in a new location for its 10th edition, Usine C, a history former factory transformed into an impressive art space.

Piknic Électronik (May 19 to September 29) Montréal's original outdoor dance party, Piknic Électronik, kicks off the summer in May and keeps going strong straight into September. Every Sunday, the festival welcomes top international and local electronic music producers to its two stages in beautiful Parc Jean-Drapeau.

Festival TransAmériques (May 22 to June 4) Challenge your perceptions of live performance at the Festival TransAmériques, a festival dedicated to international and local artists known for pushing boundaries. The 13th edition of the FTA showcases contemporary dance and theatre by established and emerging artists, choreographers, writers and directors, and hosts workshops, debates and roundtable discussions. Among the standouts this year, see Wajdi Mouawad's Tout des oiseaux, Serge Aimé Coulibaly's Kalakuta Republik and much more.

St-Ambroise Montréal Fringe Festival (May 27 to June 16) A goldmine of affordable entertainment and an essential for fans of theatre, dance, music and comedy, the St-Ambroise Montréal Fringe Festival stands out on the international Fringe circuit for its high-energy shows and welcoming style. At 29 years old, the festival features hundreds of performances and artists at dozens of venues around the Plateau-Mont-Royal and Mile End neighbourhoods, including an outdoor stage (don't miss the Drag Races hosted by drag queen Mado Lamotte!) and “13th Hour” post-midnight showcases.

MURAL Festival (June 6 to 16) For the past five years Montréal has been treated to a colourful new array of public art thanks to MURAL Festival. The festival not only invites local and international artists to paint large-scale urban art and graffiti on building facades in the area but sets up its headquarters and main stage on Saint-Laurent Boulevard. Check out the murals in progress, take a guided art tour, watch a film, eat some BBQ and join the nightly block parties!

Formula 1 Grand Prix du Canada (June 7 to 9) The Canadian segment of the Formula 1 World Championship revs up the race track and the city centre in one fast-paced June weekend. See the best F1 drivers in the world hit 300 km/hr at Circuit Gilles-Villeneuve, while in downtown Montréal you can get their autographs, see new cars and check out the free events and performances along Crescent Street and Peel Street. Head up to Little Italy for even more festivities.

Eureka! Festival (June 7 to 9) Science and technology is on display and interactive at this family-focused festival in the Old Port of Montreal. Demonstrations, workshops and performances entertain and educate kids of all ages—discover what's new in science and tech and expect to have your mind sparked!

Montreal Folk Festival on the Canal (June 13 to 16) Join locals for a long weekend of folk, roots, traditional and bluegrass music on an outdoor site overlooking Montréal’s historic Lachine Canal waterway. The family-friendly Montreal Folk Festival on the Canal marks its 12th year with shows by Québécois luminaries and artists from around the world, as well as activities, food and drink for all ages.

Montréal Baroque Festival (June 20 to 23) International musicians and emerging artists play baroque music in intimate concerts in churches and cafés as well as cheery outdoor concerts in Philips Square downtown (next to Birks and across from The Bay). This year you'll hear compositions from around the world, from a grand concert of Vivaldi to subtle sounds of Japanese traditional music.

L’International des Feux Loto-Québec (June 29 to July 27) A world-class fireworks competition between some of the best pyrotechnic companies in the world, the 35th edition of L’International des Feux Loto-Québec lights up the summer night sky over the St. Lawrence River. On Wednesday and Saturday nights, watch the themed musical shows from the grandstands at La Ronde amusement park, the Old Port of Montréal or a rooftop terrace. 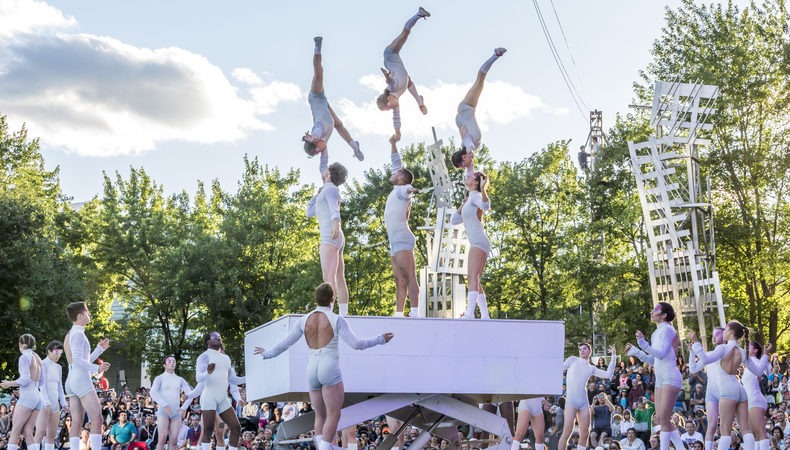 MONTRÉAL COMPLÈTEMENT CiRQUE (July 4 to 14) Montréal's long-running circus arts festival pushes the limits of circus as we know it. Ground-breaking and multidisciplinary, MONTRÉAL COMPLÈTEMENT CiRQUE brings together circus companies from around the world, showcasing talented acrobats, clowns and other physical storytellers in indoor and outdoor productions around the city – this year that includes Les 7 Doigts' fantastical Bosch Dreams. The festival also invites everyone to participate in circus activities, so get ready to fly high and clown around!

Montréal Comiccon (July 5 to 7) The city's major entertainment and comic convention, Montréal Comiccon is where fans, creators and stars meet. In talks, signings and photo sessions, an exhibition hall and themed events, the three-day convention focuses not only on comic books, but on film, TV, anime, books and gaming spanning the genres of sci-fi, fantasy, horror and beyond. This year's celebrity guests include William Shatner, UFC champion Georges St-Pierre, Tom Welling and many more!

Week-ends du monde at Parc Jean-Drapeau (July 6 to 14) Over four weekends, Parc Jean-Drapeau is transformed by the many cultures that make up Montréal. Live music, dance, activities for kids and all kinds of fabulous food make this park visit a must, whether for the Salvadorian or Cuban festivals or Jamaica Day. 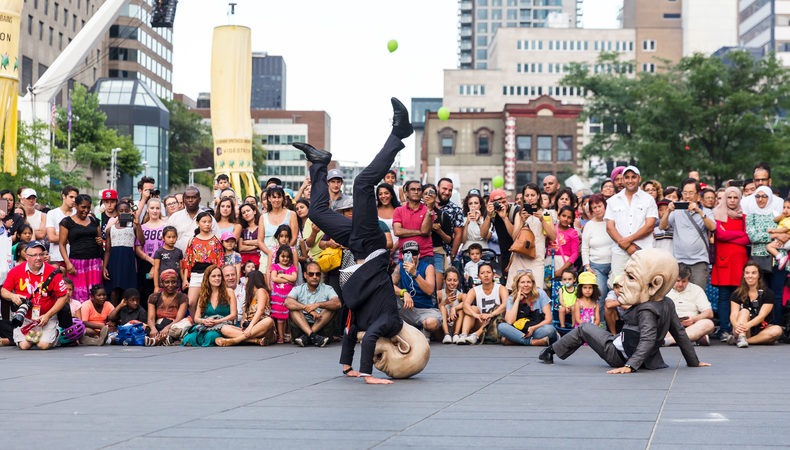 Just For Laughs Festival (July 10 to 28) The world’s largest comedy fest is where you'll find A-list comedians rubbing shoulders with the next generation in comedy – all for your amusement! Stroll the sprawling outdoor site in the Quartier des spectacles, where you'll find food trucks, a kid play zone and plenty to laugh about, and by night go to the big galas and small club shows for the full JFL experience. This year's guests include everyone from Howie Mandel to Hansan Minhaj to Queer Eye's Jonathan Van Ness.

Zoofest & OFF JFL (July 11 to 27) Off the beaten path you'll find alt-fests Zoofest and OFF JFL, showcasing new stand-up and sketch comedy, theatre, music and more. Even if you don't know these emerging artists' names, you're most likely to remember them long after the show.

Fantasia International Film Festival (July 11 to August 1) A genre film festival that goes beyond the confines of genre, Fantasia consistently presents international, underground and retro films that challenge conventions, make us think and have us jumping in our seats. Over 150 horror, fantasy, sci-fi, action and extra-strange art-house films make the cut for the festival's 23rd edition.

Haiti on Fire! (July 24 to 28) Montréal's Haitian community is the biggest outside of Haiti – and this festival brings together locals and islanders in a celebration of culture. Live music, a culinary fair, cooking workshops, literature readings and an artisanal fair are just some of what you'll find at the festival in beautiful Parc Lafontaine. 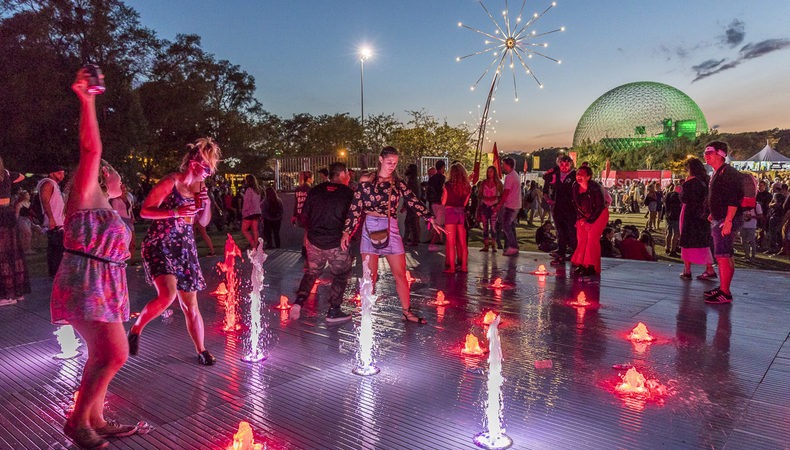 Osheaga, Music and Arts Festival (August 2 to 4) Possibly the most anticipated summer music festival in Montréal, if not all of Canada, Osheaga features a line-up of the biggest names in indie pop, rock, electro and hip hop today. Held outdoors at Parc Jean-Drapeau over three days, Osheaga's 14th edition welcomes The Lumineers, Flume, Childish Gambino, The Chemical Brothers, Tame Impala and dozens more artists on several stages, along with art exhibitions, summer activities and more.

Montréal First Peoples festival (August 6 to 14) A multidisciplinary festival like no other, the First People's Festival gathers Indigenous artists and culture creators from around the world, featuring major outdoor concerts in the Quartier des spectacles downtown, as well as public film screenings, dance and theatre performances, talks and social events.

îleSoniq Montreal (August 9 and 10) Wild, colourful and electronic, ÎleSoniq Montreal gets thousands of party-goers dancing in the August heat at Parc Jean-Drapeau. With high-tech audiovisuals to match the EDM reverie, the festival of electronic dance and urban music is all about making people dance and feel good, this year featuring Marshmellow, Above&Beyond, Kaskade and more electro beatmakers. 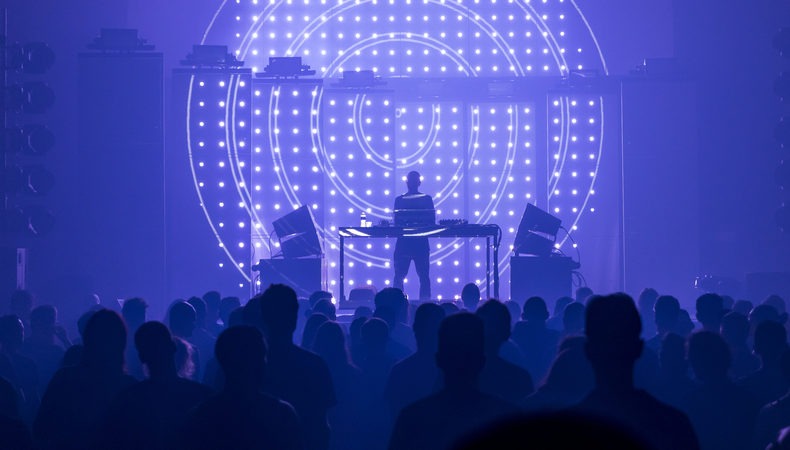 Montréal’s Italian Week Festival (August 9 to 18) Italian culture is alive and well in the city – and it comes with a made-in-Montréal festival twist during Italian Week! Along Saint-Laurent Boulevard in Little Italy, you’ll find fashion shows, an outdoor opera, an exhibition of Fiat 500 Italian vintage cars, movie screenings, an Italian dessert contest and more. Bring on the cannoli!

Fashion & Design Festival (August 19 to 24) Fashion in all its forms hits the street at the Fashion & Design Festival, held outdoors in the Quartier des spectacles. Explore Montréal's major contributions to the international world of fashion through the festival's fashion shows as well as film screenings, urban art shows, industry discussions and colourful street parties.

MUTEK (August 20 to 25) An electronic music and arts festival that spans the senses, MUTEK Montréal plunges festival-goers into new worlds of electronic creativity, from live music concerts to immersive audiovisual performances. The festival's 20th edition features music by Wajatta, Jlin, Blawan, Nicola Cruz, Circle of Live, Lotus Eater and many other artists on indoor and outdoor stages in the Quartier des spectacles, as well as three days of talks and discussion on mixed realities, AI and more at MUTEK_IMG.

MEG Montréal Festival (August 29 to September 2) The 21st edition of MEG Montréal Festival dives into the latest in electronica, hip-hop and indie music, showcasing established players and breaking new artists onto the scene in Montréal, North America and in Europe. With late-night showcases, talks and free concerts for all, MEG gives music fans new sounds to discover every night of the festival.