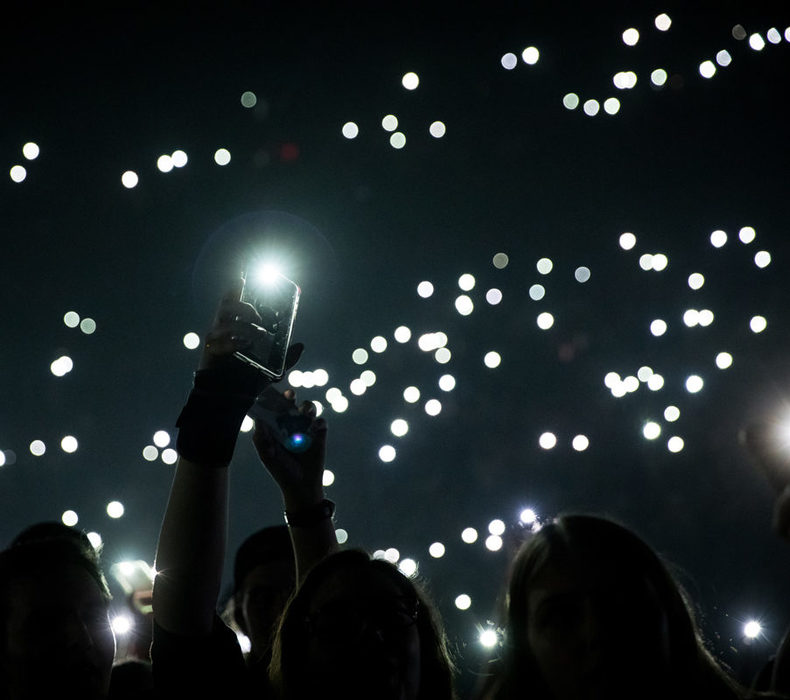 In the annals of live music, Montréal has long been a raucous hotbed for epic concert experiences. Whether it was Radiohead, Prince, Arcade Fire, Janis Joplin or The Rolling Stones, an almost uncountable number of unforgettable live shows have rocked and rolled the city over the decades. While we wait until it’s safe for a whole new wave of musical greats to leave their mark here, let’s revisit 25 of the most legendary Montréal concerts by taking a walk back in time…

On September 8, 1964, The Beatles played their only non-sold-out show ever at the Forum (check the amazing setlist). It was their first – and last – appearance in Montréal.

Prior to her Forum performance in 1968, singer Janis Joplin kept asking to have more police for security at the show, then famously asked onstage, “What are all these pigs doing here?” Backstage afterwards, a very inebriated Joplin threw up on the shoes of renowned Montréal music promoter Sam Gesser. It was the last rock show he ever promoted.

The Rolling Stones concert at the Forum in 1972 began with a bang after a bomb (origin unknown) went off under a loading ramp, damaging a truck transporting the band’s equipment and blowing out windows in nearby apartments. Montréal rock-legends-in-their-own-right April Wine opened the show.

In 1977, Pink Floyd drew nearly 80,000 spectators to Olympic Stadium, a record for this new venue. But that wasn’t the only notable thing: this is the Pink Floyd show that helped inspire hit album The Wall, after singer/bassist Roger Waters spit on a fan who tried to climb onstage.

The first-ever concert in the history of the Festival International de Jazz de Montréal was given by truly legendary soul music pioneer Ray Charles on July 2, 1980. He returned many times, until his final appearance in 2003.

In 1981, British rock icons Queen filmed their multi-platinum-certified concert film We Will Rock You (later re-released as Queen Rock Montreal) at the final two concerts of their The Game Tour at the storied Montréal Forum. It features the first public performance of the hit song Under Pressure.

While sitting at number 1 on the Billboard charts, The Police, on their massive 1983 Synchronicity Tour, played a rare, intimate club show at the Spectrum (the place went nuts) the night before playing to 40,000 screaming fans at Olympic Stadium.

Pat Metheny’s ginormous outdoor performance at the 1989 Jazz Festival is still the stuff of concert legend, having attracted a whopping 120,000 people. Said Metheny afterward: “It was the scariest night of my life, hands down.”

The winner for the most famous Montréal concert almost nobody went to but now everybody says they were at is, without question, Nirvana at one-of-a-kind punk rock venue Foufounes Électriques on their 1991 Nevermind Tour. Around 150 very, very lucky people were in attendance.

One of the most infamous concerts in Montréal music history was the ill-fated Metallica and Guns N’ Roses show at Olympic Stadium in 1992 that saw Metallica frontman James Hetfield seriously burned in a pyrotechnics accident, prematurely ending their set. After a long delay, Guns N’ Roses took the stage but also had their set cut short due to sound issues and problems with singer Axl Rose’s voice. A riot by upset fans ensued.

The August 1993 Pearl Jam concert at Auditorium de Verdun was as memorable for the smokin’, three-hour show as it was for the staggering heat after the hockey arena’s air conditioning failed. Even the beer was hot.

It was 1994, and it was Lollapalooza’s first-ever stop in Montréal (in Parc des Îles on île Sainte-Hélène). It would also be the last. Why was it legendary? We’ll let the lineup speak for itself: The Smashing Pumpkins, Beastie Boys, George Clinton and the P-Funk All-Stars, The Breeders, A Tribe Called Quest, Nick Cave, The Flaming Lips, The Verve and so on…

The Smashing Pumpkins show at the Spectrum in 2000 was memorable for a whole raft of reasons, not the least of which was watching Montréal rock royalty Melissa Auf der Maur, former bassist for Hole, rocking it with her new bandmates in the Pumpkins.

Internationally celebrated Montréal poet and musician Leonard Cohen, the very first Montrealer to be inducted into the Rock and Roll Hall of Fame, opened the 29th edition of the Jazz Fest in 2008 after a 15-year absence from the stage.

After R&B diva Erykah Badu’s tour bus got lost on its way to Old Montréal in 2008, the opening band, no less than The Roots, mesmerized the patiently waiting crowd with an outstanding two-hour set. Two exceptional concerts for the price of one.

Osheaga festivalgoers in 2009 will long remember Coldplay’s transporting performance under a rain of fireworks, coincidentally launched from the La Ronde amusement park the same evening. It was, in a word, spellbinding.

Prince performed a four-hour Festival International de Jazz de Montréal concert at Metropolis in 2011 with no less than seven encores, captivating the crowd until 3:30 am. “Is this the funkiest band in the world? …Am I in the funkiest city?” he asked the crowd. The easy answer: yes.

U2’s blockbuster 360° Tour in 2011 transformed the Hippodrome, an idle Montréal horse-racing track, into a futuristic multimedia space for two rave-reviewed concerts in front of an estimated 160,000 fans in total.

And then there was Eminem at Osheaga, also in 2011. The consummate showman and hip-hop superstar rolled into the backstage area of the mainstage by limousine mere minutes before the show, hopped onstage in front of 38,000 intense, animated fans and absolutely slayed it. Then sauntered offstage, jumped back in his limo and left.

Million-selling Belgian rapper/singer Stromae’s surprise pop-up performance on the Place des Festivals in the Quartier des spectacles in 2013 was a memorable one: the performance began in the Montréal metro.

Radiohead assembled one of the largest crowds ever seen at the Osheaga Music and Arts Festival in 2016 – a far cry from their first-ever (and every bit as legendary) Montréal show in 1993 in front of 200-or-so folks in small club Woodstock on Saint-Laurent Boulevard.

One of the most recent examples of musical momentousness was the free Montréal symphonique concert, part of the city’s 375th anniversary celebrations in 2017. The grandiose show drew 80,000 spectators to see Montréal’s three major symphony orchestras – more than 400 musicians in all – perform together in a spectacular setting at the foot of Mount Royal.