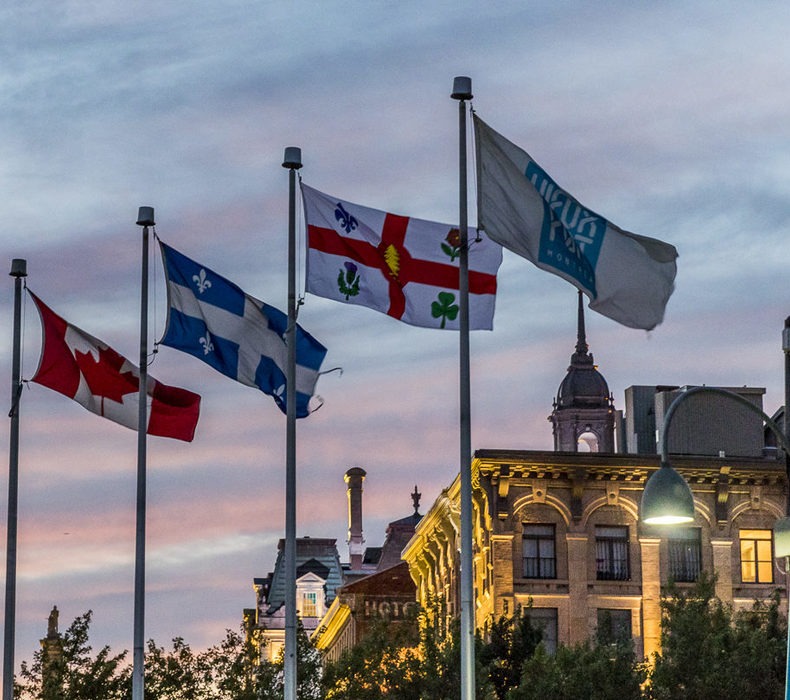 Montréal's flag and coat of arms

Montréal unveiled a new flag and coat of arms on September 13, 2017, which marked the 10th anniversary of the United Nations Declaration on the Rights of Indigenous Peoples. The new version recognizes the contribution of indigenous peoples to the city with the addition of the white pine to the centre of the design. Montréal’s flag and coat of arms now bears five symbols to recognize the city’s founding peoples: the white pine for the indigenous presence, the fleur-de-lis for the French, the rose for the English, the thistle for the Scottish and the clover for the Irish.

The Haundenosaunee Confederacy, referred to as the Iroquois Confederacy by the French and the League of Five Nations by the English, means “the people of the long house” and is comprised of five nations: the Mohawks, Oneidas, Onondagas, Cayugas and Senecas. The white pine tree was chosen to symbolize the Great Tree of Peace because its needles grow in clusters of five – like the five nations – and because of the symbolism of its deep roots and sheltering branches. The Great Law of Peace is the oral constitution of the Haundenosaunee Confederacy and the Great Tree of Peace, represented as a white pine, is an important element in the history of the confederacy.

You can learn about this rich tapestry of art, culture and storytelling each year in August when the First Peoples Festival celebrates Indigenous culture from across the Americas. Or explore the Ashukan Cultural Space in Old Montréal, the first and only permanent space in Canada dedicated to the dissemination of Aboriginal arts, artists and culture. At Cabot Square downtown, you can sample First Nations cuisine prepared by Montréal chef George Lenser at the Round House Café. 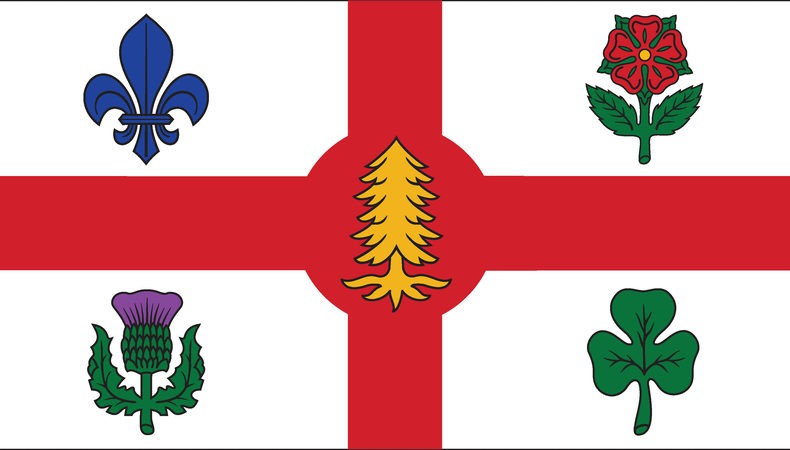 A green shamrock represents the Irish.

Wondering where to experience Irish culture in Montréal? Our St. Patrick’s Day parade is the oldest in Canada and – technically – the oldest continuously held St. Paddy’s parade in North America. It has been held every single year since 1824, and no circumstance, from blizzards to economic depression, has stopped it from marching on! If you’re not visiting in the month of March, you can simply grab a Guinness at the Irish Embassy Pub located just a couple blocks from the Bell Centre. Or you can pop into to one of the city’s many other Irish pubs any time of the year.

A purple thistle represents the Scots.

The Montréal Highland Games are held each year in August. Spectators can see pipe bands, athletes and highland dancers. Street names in the city’s Golden Square Mile are a veritable who’s-who of Scottish families behind the city’s boom years from 1840 to 1930. If you want to sample some traditional Scottish grub any time of the year, nap some haggis at Ye Olde Orchard Pub and Grill — there are five locations across the city offering up a cozy, family atmosphere.

A blue Fleur-de-lys represents the French

The FrancoFolies festival is one of the least-known secrets to those outside of Quebec. The annual French music event attracts close to one million festival-goers, offering up more than 250 shows, including 180 free outdoor performances. The city also becomes quite festive each July 14 for Bastille Day, where you’ll find folks gathering in Parc Mont-Royal, wearing berets and sing La Marseillaise. As for French cuisine, well you can’t throw a baguette without hitting at least three delicious (and affordable) French restaurants in Montréal.

A red Rose of Lancaster represents the English (and Welsh).

For a proper ‘High Tea’ in Montréal, look no further than the Queen Elizabeth Hotel, which also happens to be where a man from Liverpool named John Lennon once penned a little song called Give Peace A Chance. Tea is served in an English-style china teapot, while the goodies arrive on a multi-tiered serving platter. If you’re looking to whet your whistle with something a bit more potent, head down to Burgundy Lion — a modern English pub with traditional English cuisine mixed with a laid back, quintessentially Montréal feel. 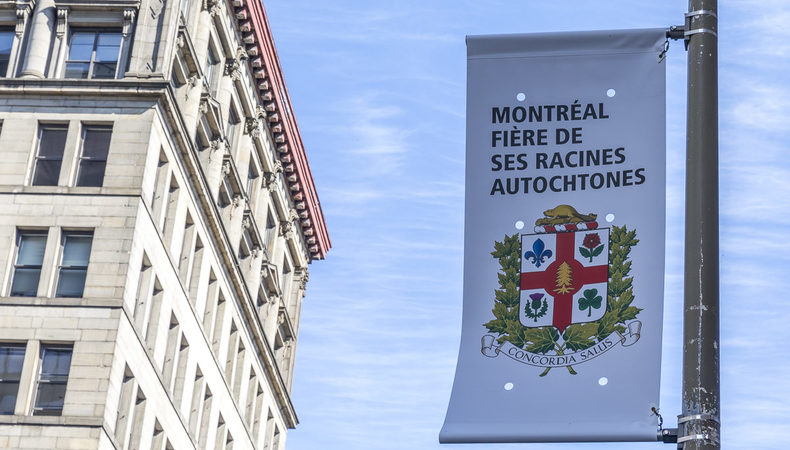