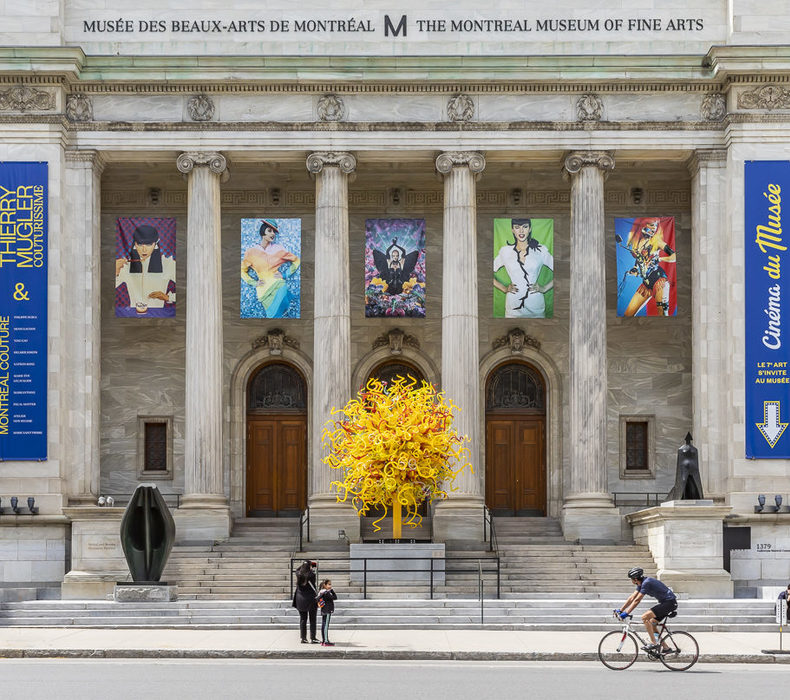 A tour of Montréal’s English history

The red rose on Montréal’s flag represents the contribution of the English to the city’s history. Here is a quick guide to the landmarks that attest to our strong English origins. 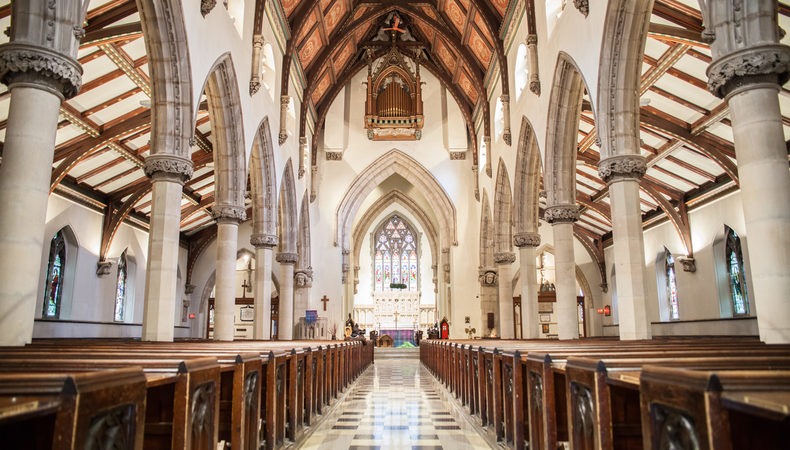 This picture-worthy neo-Gothic beauty and national historic site sits atop the many boutiques of downtown’s underground pedestrian network (RÉSO). Go there to see gorgeous arches and pillars, woodwork, stained glass and one of Canada’s finest reredos (stone screen above the altar) or enjoy its lovely cloister garden. Montréal’s first Protestant congregation originally met in the old Recollet Church in 1760 under the leadership of an Anglican minister, but a growing population and fires that destroyed two earlier Christ Churches forced it to move several times to its present Sainte-Catherine Street location.

FUN FACTS: The church’s original 3.5-million-pound steeple started sinking and had to be replaced with a lighter model. 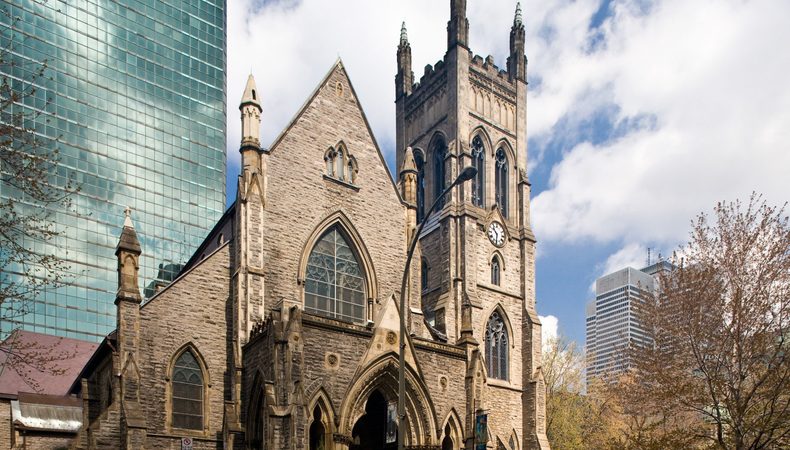 Named after England’s patron saint this neo-Gothic gem—named a historic site in 1990—was built in 1869 on the outskirts of Montréal. Today, St. George’s Anglican Church is surrounded by skyscrapers and sits adjacent to Montréal’s Place du Canada. Admire its English Revival architecture with pointed arch, pinnacles and bell tower or wonder at its richly carved ceiling and spectacular stained glass windows.

FUN FACT: Its hammer-beamed roof is only second in size to the one in Westminster Hall in London. 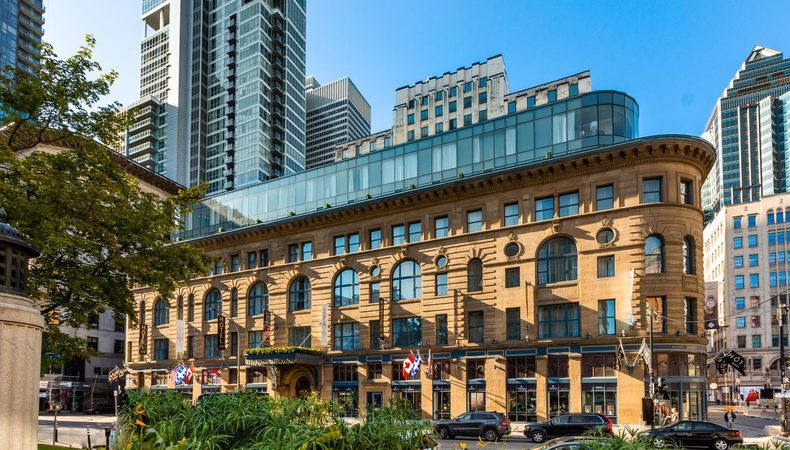 This beautiful neo-Roman-style edifice, which faces downtown’s Square Philips, has housed jaw-dropping jewelry since 1894 (Birks Jewelers was founded as Henry Birks and Company on Saint-Jacques Street in 1879). This iconic downtown property was sold in 2018 and turned into a stunning luxury boutique hotel. You can still gawk at glittering gems on the main floor Birks and now dine at the exquisite French brasserie Henri or indulge in an ultra-posh stay altogether! 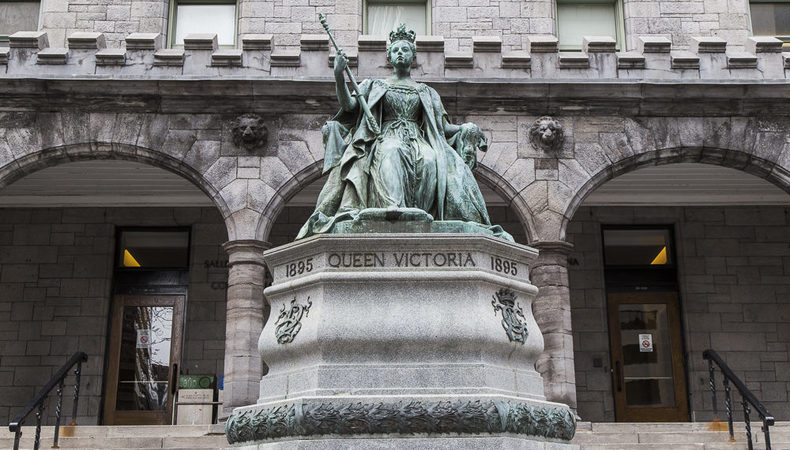 This cast-bronze statue of Queen Victoria was sculpted by her daughter Princess Louise and commissioned by Lord Strathcona. It was placed in front of the Strathcona Music Building on the McGill University campus in 1900.

The Montréal Museum of Fine Arts, Canada’s most-visited arts museum, started out as the Montreal Art Association in 1860, then became an art museum following a generous donation of money, land and art collection in 1879 by Benaiah Gibb Jr. His father, Benaiah Sr., came from England and opened a very successful Montréal tailoring and ready-to-wear business. Originally named after the Gibb family, this beautiful 1912 Beaux Arts-style building is now called the Michal and Renata Hornstein Pavilion and houses the Mediterranean Archaeology, Pre-Columbian Art and Sacred Africa collections.

FUN FACT: The four 26-ton marble columns supporting the front portico were each carved from one piece of marble. 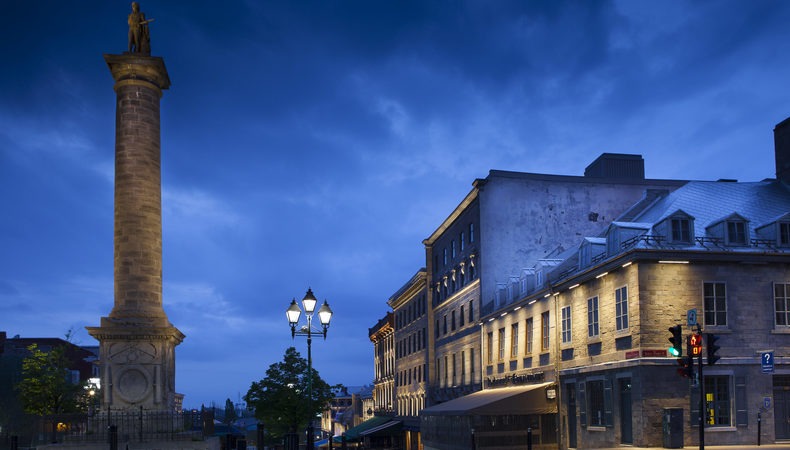 This memorial to Admiral Horatio Nelson, English military strategist and architect of British naval supremacy, towers over Place Jacques-Cartier. It was constructed by a committee of Montréal citizens in 1809 and is Canada’s oldest war monument.

FUN FACT: The 8-foot statue at the top is, in fact, a replica, but you can see the original at the Centre d’histoire de Montréal.

What’s the link between one of England’s literary greats and a Montréal spaghetti house? It’s rumoured that Charles Dickens, on a whirlwind Montréal visit in May 1842, wrote the notes to A Tale of Two Cities in the back room of this very same building.

FUN FACT: Dickens made a splash during his stay, performing at the Théâtre Royal (now the Bonsecours Market) and staying at the still-standing Rasco’s Hotel on Saint-Paul Street. There even used to be a street named after him.

The Molson name is synonymous with Montréal—and a thirst-quenching cold beer. In 1786, Englishman John Molson set Canada’s oldest brewery on the shores of the St. Lawrence River; however, production moved to Longueuil in 2018. The Molson family built their fortune on its brewery and diversified into lumber, banking, steamships and railways. They even had their own bank, the stately Molson’s Bank, in Old Montréal.