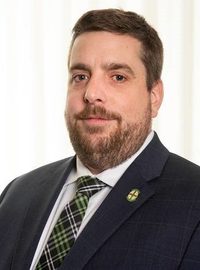 We often say how Irish Montréal is, but many don't know some of the history and the many places with Irish significance you can visit. Here are just seven of the many places and things to do with ties to Montréal’s Irish roots. 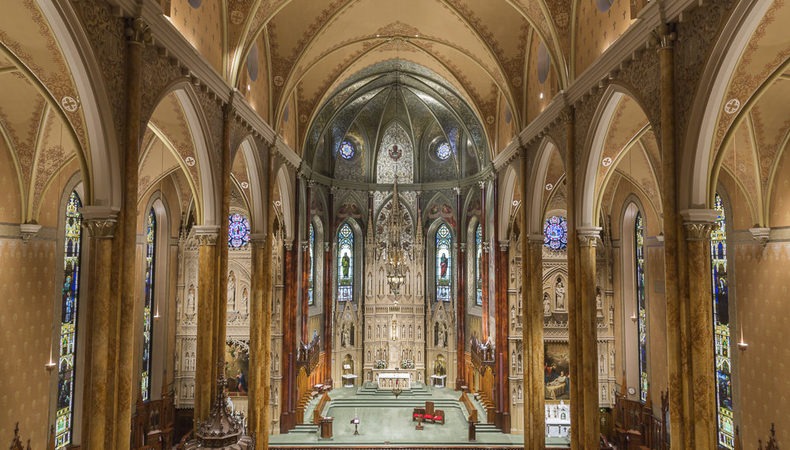 You can't write about the Irish without a mention of a church. In fact, I will mention several throughout this text. The Irish started arriving to Montréal in large numbers around 1817 and, by 1824, the original places of worship, Notre-Dame-de-Bon-Secours Chapel and later Église des Récollets de Montréal, could no longer accommodate them. They needed their own church. Land was purchased on what was, at the time, the outskirts of Montréal on a slope overlooking the homes of the Irish in Griffintown, Pointe-Saint-Charles and Goose Village near the Victoria Bridge. Construction of St. Patrick's Basilica commenced in 1843 and the first mass was celebrated on March 17, 1847. On March 17, 1989, Pope John Paul II promoted the church to a minor basilica, and it is now a historical monument, recognized by the Québec and Canadian governments. 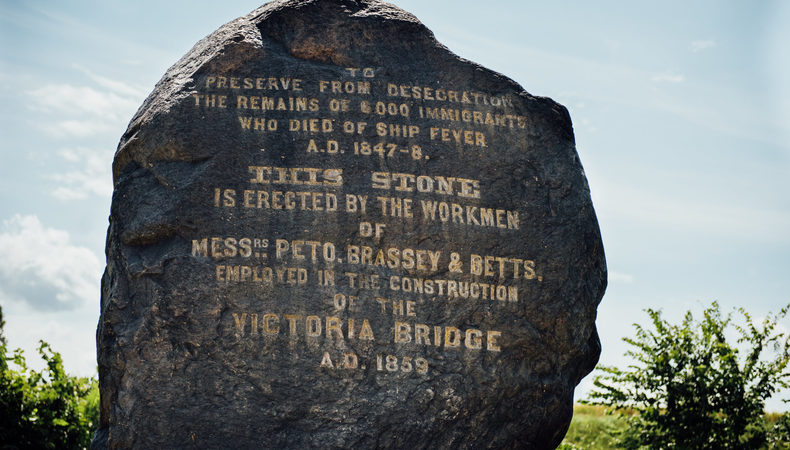 Affectionately called the Black Rock by the Irish community, this is a monument to the thousands of Irish who arrived on the shores of Montréal from 1847 to 1849 only to perish of typhus or ship's fever. Due to the Great Hunger, An Gortor Mór, in Ireland, over one million people died and more than one million people emigrated in search of a better life, many of whom came through Montréal and Canada. Currently, the Black Rock is situated on a small patch of grass near busy Bridge Street at the foot of the Victoria Bridge. The Irish community, in conjunction with Hydro-Québec, are planning a more appropriate site for this monument to an important moment of Montréal history.

The ruins of St. Ann's Parish

St. Ann’s was the church of Montréal's Irish living in Griffintown, the heart and soul of the community. Aside from the church itself, there was an orphanage and several schools. In the 1950s and 1960s, Griffintown was rezoned as industrial, pushing many of the residents out of the area and making the church obsolete. St. Ann’s Church was demolished in 1970 but the community has not forgotten it. The area where the church was is now a park (Parc du Faubourg-Sainte-Anne) where the building foundations can still be seen, an apt symbol of the foundation of Canada's Irish community. Park benches line exactly where pews would have been situated, allowing visitors to the park to hearken back to this once vibrant parish. 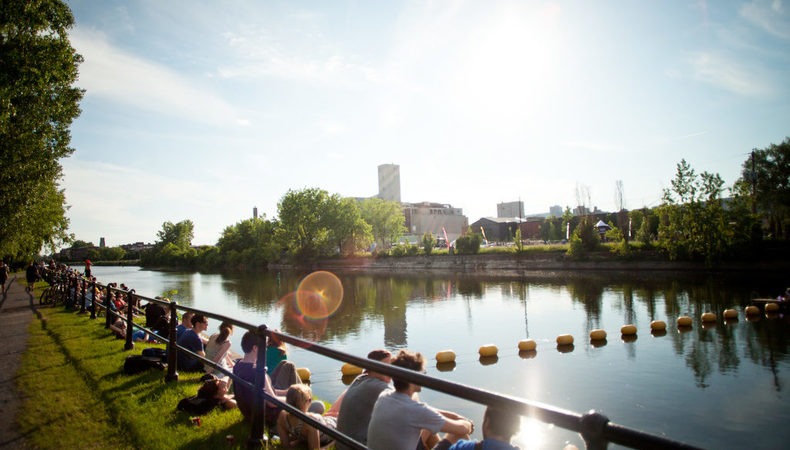 The Lachine Canal and the Victoria Bridge

There isn't a specific location to pinpoint the contribution of the Irish to these major infrastructure projects, but the Lachine Canal was built and expanded predominantly by the hands of Irish workers. Like the canal, Irish workers made a significant contribution to the construction of the Victoria Bridge – one history’s bitter ironies since many of the Irish workers had emigrated from Ireland – which was at the time under the reign of Queen Victoria – due to the Great Hunger. 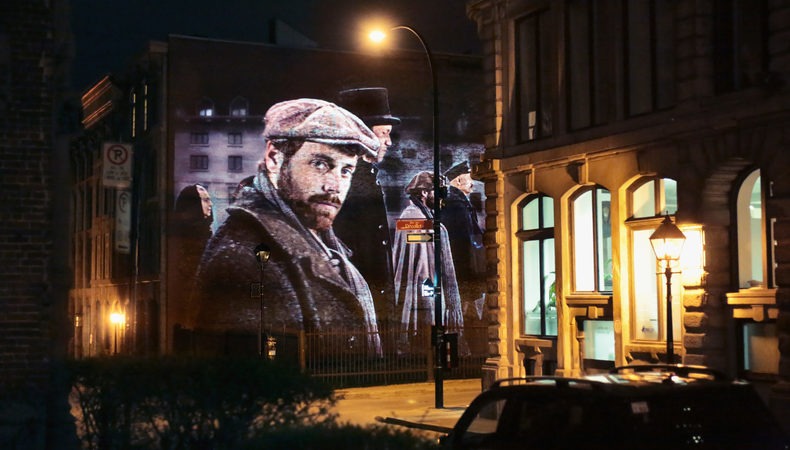 The free Montréal en Histoires mobile application offers a self-guided walking tour to help users discover the history of Montréal through multimedia projections and sound. Each stop has an explanation of events with a projection on nearby walls. One of the stops is Joe Beef's tavern and the funeral for this well-respected business owner. Joe Beef helped to feed the homeless and hungry Irish citizens of nearby Griffintown.

Irish Montréal Excursions offers walking tours of the Irish Famine in Montréal and Irish History in Montréal, bringing guests to points of interest in Montréal with Irish significance. They offer public and private group tours to some of the sites listed above and many more. 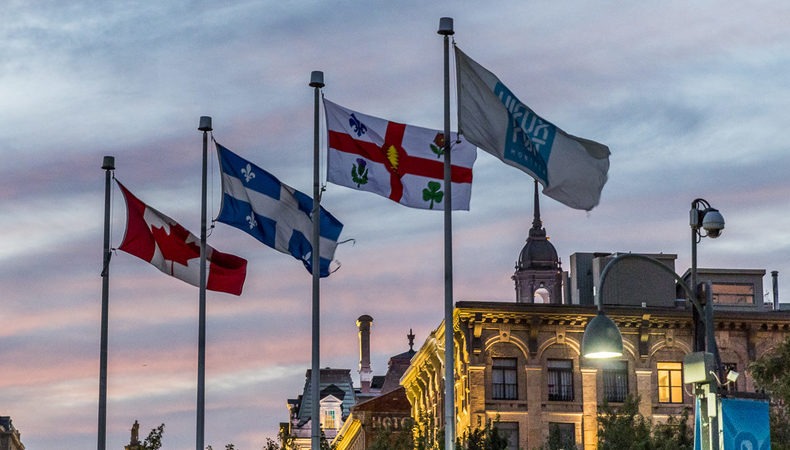 These are just a few ideas, but it isn’t hard to find links to Montréal’s Irish history wherever you go. Just visit City Hall, where you can see the shamrock on the flag and the names and faces of many past public servants. You’ll see Irish names on plaques on buildings throughout the city, all of which are testimonies to the ingenuity, philanthropy and workmanship of our resilient community. Or stroll through the neighbourhoods in the southwest area of Montréal and you’ll see street names like Saint-Patrick, Hibernia, Coleraine and so many more. And, of course, you can connect with Montréal’s vibrant Irish community during Irish season and our St. Patrick’s Day celebrations. All this exploring around Montréal can make you thirsty. Luckily, we have rounded up a list of Montréal's best pubs for you to share a pint and a story or two. Fáilte!