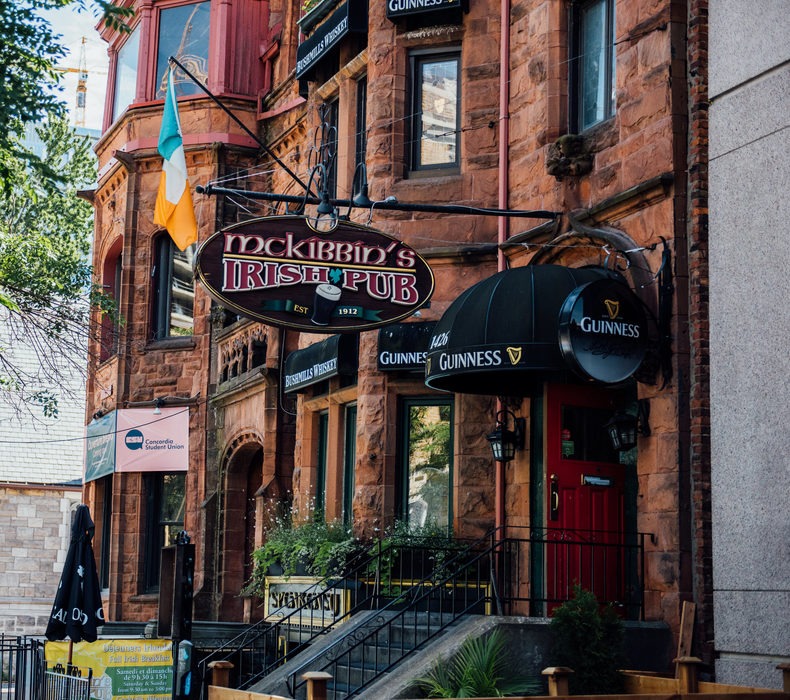 The Irish have a long and storied history in Montréal, contributing much to its creation and culture. It’s a fact that’s reflected in the city’s many Irish (and Irish-ish) pubs, places where you can grab unfailingly great food and drinks in equally great company. Let the following be your guide to some of Montréal’s best Irish pubs…

A very authentic slice of Ireland, of their four locations, the original McKibbin's Irish Pub is located in downtown Montréal (where the majority of the city’s Irish pubs are located) and another is conveniently situated on Saint-Laurent Boulevard in the nearby Plateau-Mont-Royal district. These spots are always jumping and are standing room only on St. Patty’s. (Fun fact: Montréal’s St. Patrick’s Parade has been held since 1824, making it the oldest and largest after NYC’s parade.) The McKibbins must-have: sink your teeth into their aptly titled Titanic Burger.

A local favourite (and occasional post-game haunt of Montréal Canadiens staffers and players), Hurley’s Irish Pub on Crescent Street is a darkly lit, winding labyrinth of small rooms and intimate seats tucked into secluded corners. It’s got great draft beers on tap, including some harder-to-find varieties like Murphy’s and Harp, and the food is delicious and wholly authentic. Be sure to try the Guinness Beef Stew.

Great live music and a vibrant atmosphere, Le Vieux Dublin Pub & Restaurant, or simply the Old Dublin as it’s known, is a city institution that comes as close to Irish pub royalty as it gets. Nestled in the heart of downtown, the Old Dublin is, as the name suggests, the oldest Irish Pub in Montréal, and it ain’t no blarney when they say they’ve got one of the best scotch lists on this side of the Atlantic.

With its oak-beamed ceilings, hand-carved fireplace and many other unique features, McLean’s Pub on Peel Street has been a mainstay of downtown pub life since 1992. A great place to catch a Habs game, there’s always something on the go, whether it’s live music, DJs, karaoke or comedy. Pro tip: be sure to tuck into a plate of their wings.

A very popular meeting spot with Montrealers of all (legal) ages, Ye Olde Orchard has gone from its original Monkland Village digs to six Montréal-and-area locations. Downtown locations of the Ye Olde empire include Ye Olde Orchard on de la Montagne Street, in a beautiful heritage building, and on Prince-Arthur Street, on the Plateau, just steps from Saint-Laurent Boulevard. Notably, they all boast great staff, a good beer selection and above-average food.

Just a little off the beaten path, in Montréal’s Notre-Dame-de-Grâce (N.D.G.) neighbourhood, is Honey Martin Pub. A homey hole-in-the-wall with consistently great live tunes and a very convivial ambiance, Honey Martin is the real neighbourhood Irish pub deal, as the fiercely loyal clientele will only be too happy to let you know.

With nothing short of nine poutines on offer (check out the “Chuck Norris”) on a choice-packed menu, Pub McCarold in the neighbourhood of Côte-des-Neiges takes the food part of “food and drink” seriously. And innovative specials are part of the pub’s surplus of charm: don’t be surprised by the appearance of a Nordic shrimp salad, a Guinness pulled-pork mac’n’cheese, or a seafood pot pie with a Smithwick’s sauce.

Situated in the heart of Montréal’s Quartier latin on Saint-Denis Street, Patrick’s Pub Irlandais is an oasis of Ireland in a lively and bustling area of downtown. Live music, an impressive selection of beers, an outdoor terrasse and a kitchen that’s open until 2 am every day of the week are all part of Patrick’s appeal.

Again, on the not-quite-Irish side of things, “European” pub Le Sainte-Élisabeth (hey, Ireland’s in Europe, so technically it works) is a bit of a hidden jewel just off Sainte-Catherine Street between downtown and the Gay Village. Its warm, inviting ambiance is perfect for all flavours of get-togethers, and its vine-lined terrasse is easily one of the most beautiful patios in Montréal.