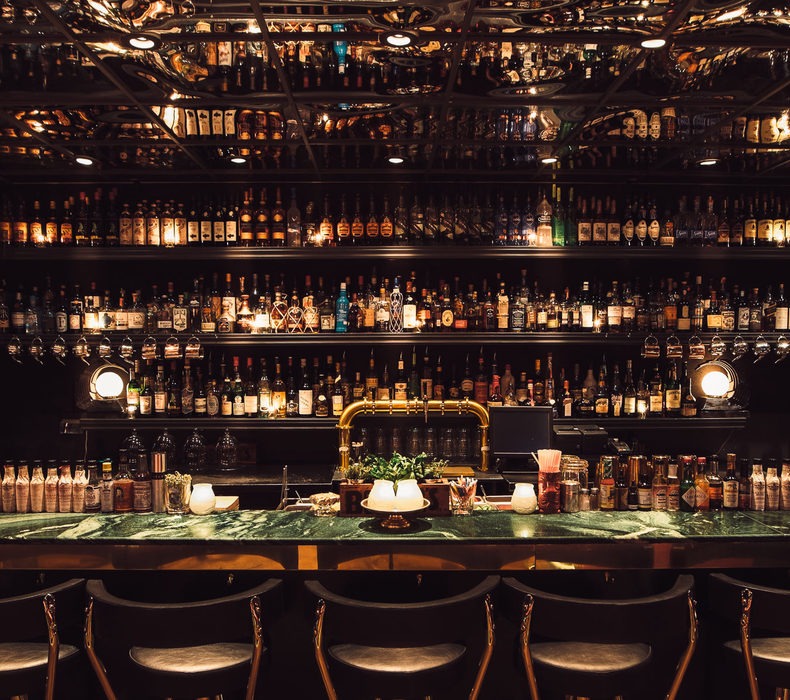 Montréal’s hot summers and chilly winters can chase the best of us indoors for a quick nip or pint. Sure enough, Montréal has no shortage of cozy bars. Here are a few of my favourites, from Saint-Henri in the West End to the Plateau in the East End.

Throwback to the classic Montréal brasserie

When I’m in the mood for a laidback drink, I head to Bar de Courcelle (4685 Notre-Dame Street West), a classic “old brasserie” style bar in Saint-Henri steeped in the neighbourhood’s working class roots. In recent years, the live band nights and vintage tavern decor – from the checkered black-and-white floor to the wood paneling – have made the bar super hip. The food menu features pub fare and the bartenders are friendly.

If you’re in the mood for something plusher, head east a dozen blocks to the Atwater Cocktail Club (512 Atwater Avenue), a back-alley bar founded by the same guys behind Foiegwa, the French diner located next door, located in Little Burgundy. You’ll find a classy speakeasy-inspired décor and atmosphere, from the wooden floors to the magnificent bar and mirrors on the ceiling. If you love your cocktails and spirits, their menu and super-friendly bar staff offer dozens of choices.

The ghosts of Mordecai and Nick

If I want to walk short distances between some of my favourite bars, then downtown Bishop Street is a fun strip, one block over from Montréal’s iconic Crescent Street. Grumpy's Bar (1242 Bishop) is a super cozy neighbourhood watering hole with a low-ceiling wood interior. This classic bar was popular with my mentor, legendary Montréal newspaperman Nick Auf der Maur and his drinking buddy, Montréal literary icon Mordecai Richler. In fact, scenes from the 2010 film Barney’s Version – adapted from Richler’s novel of the same name, and starring Dustin Hoffman and Paul Giamatti – were filmed here. Grumpys also books live bands (jazz, bluegrass) and is a popular student hangout at night. A true Montréal classic.

Montréal’s original McKibbin’s Irish Pub (1426 Bishop Street) downtown is housed in a historic turn-of-the-century mansion with bars on three floors. The popular main-floor wood-trim pub is warm and welcoming, decorated with genuine artifacts and authentic collectibles from Ireland, built around a gorgeous dark walnut bar that features a large selection of beers on tap. The pub also books live bands – no less than Oasis front man Liam Gallagher joined a Sunday afternoon jam session when he was in town to perform at the 2017 OSHEAGA music festival. McKibbin’s also has a superb kitchen menu of classic pub fare and screens sports on HD plasma and big-screen TVs. Their small basement Speakeasy bar is even cozier, with legendary Montréal bartender Kevin – even bartenders from neighbouring bars drop by for a drink with Kevin after their shifts.

Taverne Midway on The Main

Travelling further east, you will come upon Saint-Laurent Boulevard, otherwise known as “The Main,” the historic divide between East and West Montréal and the stomping grounds of Montréal’s fabled Sin City-era red-light district. Just steps away from The Main’s epicentre at Saint-Laurent Boulevard and Sainte-Catherine Street is Taverne Midway (1219 Saint-Laurent Boulevard), which has been open since 1927. The neighbourhood – like the bar itself – has since gentrified, of course, but remains at the heart of Montréal’s Quartier des Spectacles. With its vintage feel and terrific cocktail menu, Taverne Midway remains a popular and comfortable bar to have a drink at before or after a concert. The décor is warm, with lots of copper, wood and brick walls. A true Montréal original.

From Taverne Midway on The Main, walk north to Else’s (156 Roy Street East), a Plateau institution founded a quarter-century ago by a blonde Norwegian named Else Smith, a self-described original punk godmother. Else passed away in 2000, but her portrait still watches over her classic neighbourhood watering hole, which is dark, comfortable and filled with regulars and local artists. At the rear of the bar you’ll find the piano where Montréal jazz icon and Else’s regular Vic Vogel long tickled the ivories. Else’s doesn’t have a full-on bar license, so you will need to order some nibbles, which range from cheap nachos or tapas to full meals. You can also try a slice of cheesecake baked by legendary Montréal pastry chef Johnny Cheesecake, who has been supplying cakes for Else’s since it opened.