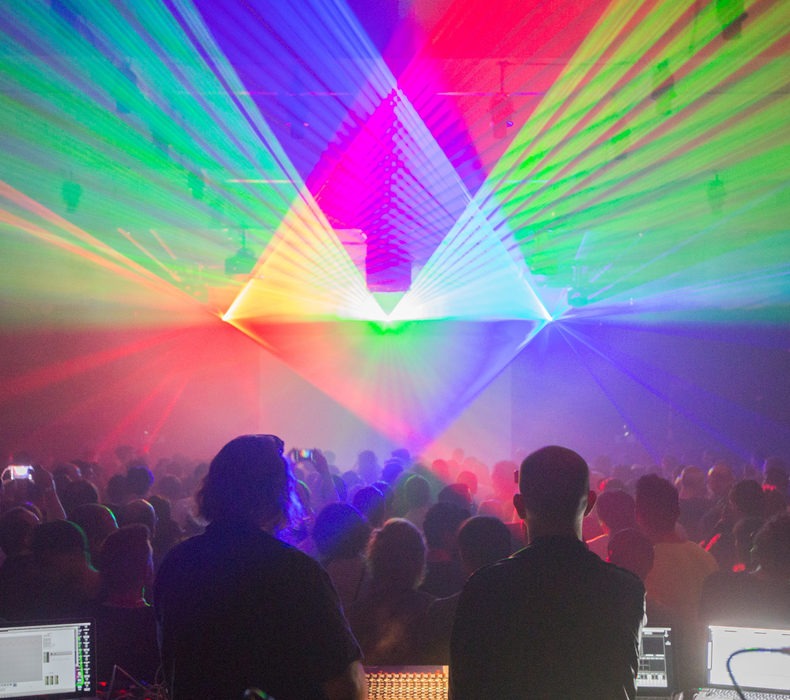 Get your nightlife on in Montréal

Alexandra Gauthier is a young Montrealer who loves to eat, drink and be merry with friends in neighbourhoods all over the city.

Montréal is a city with a heart that beats for its nightlife. No matter the season or day of the week, its steady, welcoming rhythm can be found behind doorways of bars, bistros, burlesque clubs, and brewpubs all over town. In this guide we raise a glass to some of Montréal’s most notable spots that are sure to speak to your desired vibe.

Montréal is known its thriving music scene, and there’s no better way to experience local acts than at its show bars. For just a few bucks (or sometimes even free) you can hear independent acts of all stripes any day of the week. Check out the lineups at legendary Mile End venues Casa del Popolo or Sala Rossa, Little Italy’s alternative L’Hémisphère Gauche, countercultural Mile-Ex darling Ritz P.D.B., Plateau mainstay l’Escogriffe Bar Spectacle, home to hardcore Turbo Haüs on St-Denis Street, or relative newcomer Diving Bell Social Club over on the Main. The Phi Centre down in Old Montréal is also worth exploring, with its next-level programming of both up-and-comers and big stars of the indie scene. 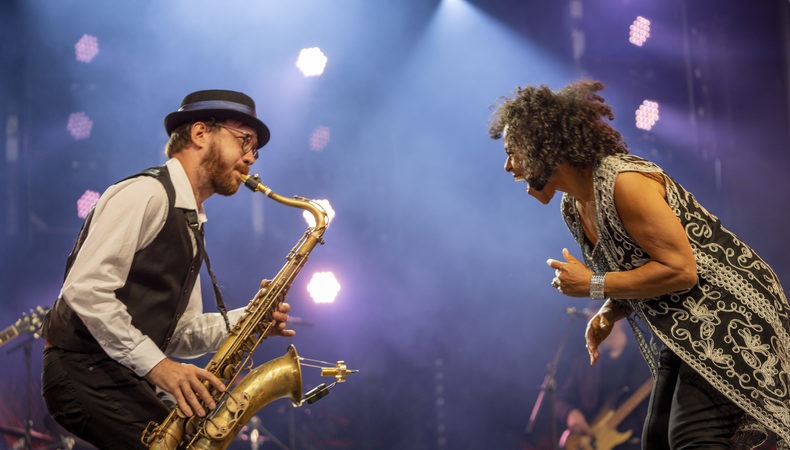 And all that jazz: hepcat haunts

Lovers of jazz will forgive our dated nomenclature, as it takes an old soul to appreciate the complex, heady, and often frenetic music that draws thousands to the city every summer for the Festival International de Jazz de Montréal. Outside the festival, year-round entertainment can be found all over the city. Upstairs Jazz Bar & Grill in the downtown core is classic cool, the Plateau has both cozy Diese Onze and prohibition-era themed speakeasy Bootlegger, and Old Montréal’s Modavie and Stash Café are sure to satisfy with musical acts to accompany either French or Polish menus, respectively. Lastly, no guide to jazz would be complete without mention of the House of Jazz Laval, which goes so hard it could be described as “what if Medieval Times but a jazz club?” 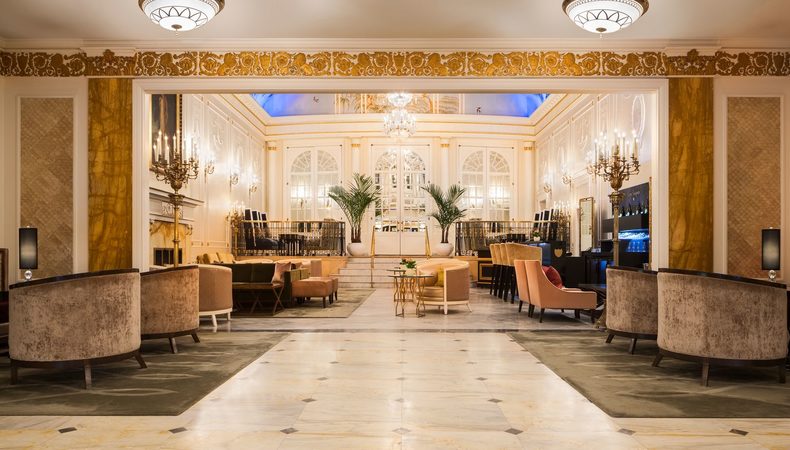 Puttin' on the ritz: hotel hideouts

There is a certain something about hotel bars, isn’t there? They’re all at once familiar and mysterious, with an air of a place in-between, occupied by curious mix of tourists and locals. Whether it’s for a business lunch, a cheeky nightcap before turning in, or the start of a truly memorable night out with dinner and drinks, these hotel hot spots have got you covered. 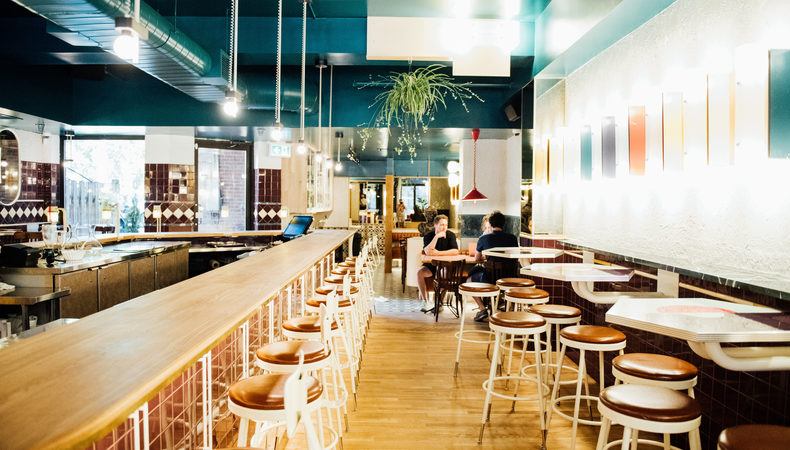 For many Montrealers, there are few sights finer than a table littered with tiny plates and long-stemmed glassware. Raise a glass with an old vintage or a new favourite at any one of the city’s exceptional wine bars, such as celebrated mainstay Le Vin Papillon in St-Henri, Mile End favourite Buvette Chez Simone, or the ever-sophisticated Pullman, located further South on Parc Avenue. Old Montréal’s stylish Philémon Bar has the added benefit of being a hot party destination on the weekends; if you’re seeking a more intimate Saturday night hang, try Le Diplomate in Little Italy. Petite-Patrie boasts the city’s only Nordic wine bar, vinvinvin, and the fun and unusual L’idéal bar & contenus in the Quartier des Spectacles is a hybrid natural wine bar and podcast studio. 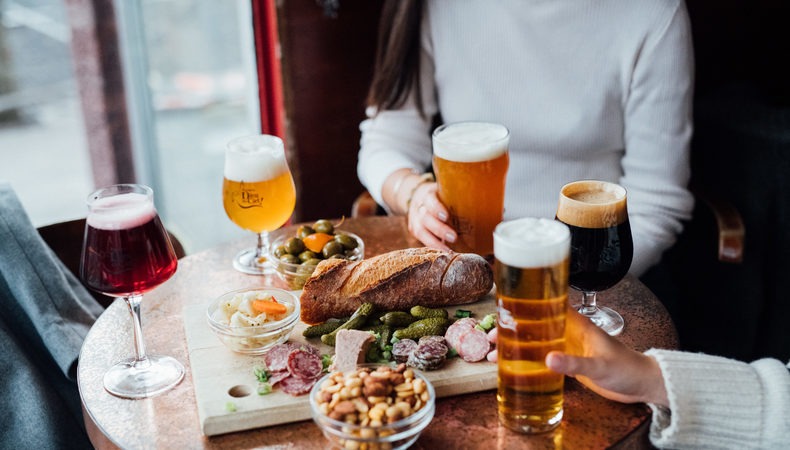 Montréal’s own Molson Brewery is the oldest North America, so it comes as no surprise that we’re passionate about our beer and with it, the local craft beer scene. Exceptional brewpubs can be found all over La Belle Ville with a diverse range of sudsy offerings. Menus often offer flights so you can taste a range of IPAs, ales, stouts, sours and ciders. Brasserie bar-hop by neighbourhood, with breweries Dieu du Ciel!, Siboire and HELM microbrasserie sur Bernard in the Mile End, or Saint-Houblon, Birra and Harricana in Little Italy and Mile-Ex. Take a slight jump from Réservoir in the Plateau to Quartier de Spectacle’s BENELUX and the Village’s Le Cheval Blanc, or spend a day on the Lachine Canal with trips to the McAuslan Brewery (with its summer terrasse), 4 Origines, Messorem and Memento. Cheers!

Nothing beats watching your favourite team play live, but there’s no denying the electric energy that crackles through a sports bar with an enthusiastic crowd cheering and jeering at a big screen. Root for your team (Go Habs, go!) with a frosty pitcher and something fried at any one of Montréal’s go-to sports bars, such as the iconic Champs on St-Laurent Boulevard, downtown pillar Ziggy’s Pub, NextDoor Pub & Grill in NDG, any number of La Cage Brasserie Sportif locations, or switch it up with a sip of pastis and a side of soccer at Monsieur Ricard on Parc Avenue. And that’s only naming a few. 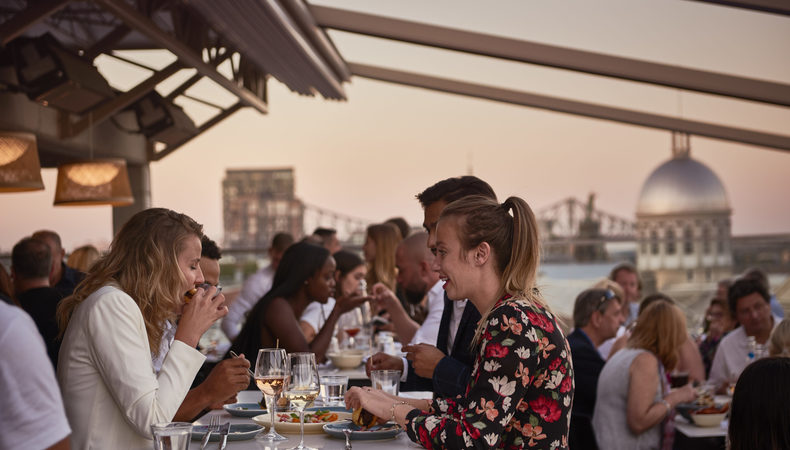 Summer means something particularly special to Montrealers. Every spring and through to fall, bars, restaurants and cafés city-wide as much as double their space by spreading out outside, be it on rooftops, sidewalks or backyard decks. The result: Montréal’s famous terrasses. Whether you seek the potent, mid-century cocktails that await on Snowbird’s Tiki Bar‘s terrasse, the vine-covered hideaway of Pub Le Sainte-Élisabeth’s flagstone patio, or the stunning views and air of elegant cool atop Old Montréal’s Hotel Nelligan, there is a perfect Montréal terrasse waiting for you. 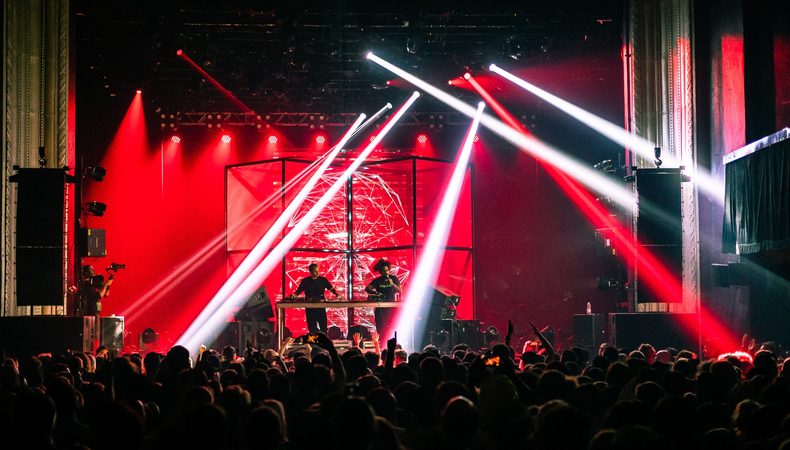 Turn down for what: DJ nights

It’s the birthplace of MUTEK, the home of the SAT and the site of an annual city-wide celebration of digital culture: Montréal is definitely an international hot spot for EDM. Alongside a host of regular events, Montréal is also home to the annual EDM festivals ÎLESONIQ and the wintry and wonderful Igloofest. Dance parties can be found everywhere, from famed event spaces like New City Gas down in Griffintown, to neighbourhood bars with weekly parties such as Barbossa in the Plateau and Bar Datcha in the Mile End. Seasonal party locales include weekly Piknic Electronik or the legendary Beachclub of Kylie Jenner-birthday fame, but acclaimed after-hours club Stereo is DJ heaven for revellers year-round.

The rich diversity of this city’s nightlife has all kinds of dance floors to offer. Discover Montréal’s oldest Latin dance clubs, Salsathèque and Club 649, where tropical rhythms reign supreme and all are welcome, from spirited pros to curious wallflowers. Lush, world-beat favourite and home to International Nuits d’Afrique Festival is club Balattou up on St-Laurent Boulevard. Lower down on the Main, swing dancing school Cat’s Corner opens their doors to the public every Friday night for a short beginners lesson followed by a jiggerbuggin’ good time. Country music enthusiasts and dancing fans need only venture to neighbouring borough Lachine to discover the island’s very own Honkeytonk, but if you’re just looking for unstructured, good-time nostalgia to move to, head to the disco-lit floor of Electric Avenue on Crescent Street. Everybody needs to experience a supper club at least once in their lives; the restaurant-cabaret-nightclub atmosphere makes for a truly one-of-a-kind night out. Old Montréal is home to many, such as the popular and established Time Supper Club, sleek and trendy newcomer 212 Montréal, cocktail pitcher heaven Santos, French-Asian fusion cabaret Bord’Elle, and the 1920s bank vault turned nightlife hotspot La Voûte. Notable exceptions to the supper club row are downtown’s enchanted, underground forest restaurant-cabaret Soubois and spectacular dinner-theatre music hall Le Balcon, located within the historic St. James United Church. Last but not least, the granddaddy of Montréal’s Vegas-style entertainment can be found at the Casino de Montréal’s Cabaret.

There’s nothing like a classic pub atmosphere, complete with shiny brass, lustrous, dark wood and deep green leather abound. There are a number of Irish, British, and Scottish-style pubs from which to grab a pint, including McKibbin’s Irish Pub, Hurley’s Irish Pub, and Ye Olde Orchard. If you’re more of a scotch and whiskey connoisseur, make your way to Quartier Latin for rare whiskey specialist l’Île Noire, or the Mile End’s cigar lounge Whisky Café. Interested by the world of Japanese whiskey? Look no further than the plateau’s Big in Japan Bar.

Montréal has a unique and vibrant drag scene that combines high camp and cabaret into one funny and glamorous entertainment experience. Come pay your respects to the grande dame of Montréal drag, Mado Lamotte, at her eponymous venue Cabaret Mado, one of the busiest clubs in the Village. Found also in the neighbourhood are bars such as the multistoried Complexe Sky, with regular drag events, District Video Lounge, which hosts drag royalty contests, and Bar Le Cocktail, where local drag talent takes the stage nearly every night of the week. Outside the Village, regular drag shows are a staple at both Café Cléopatra—its second floor has been a show bar since 1895—and Montréal’s top burlesque nightclub, The Wiggle Room. Aforementioned indie venue Diving Bell Social Club is also home to regular drag events. 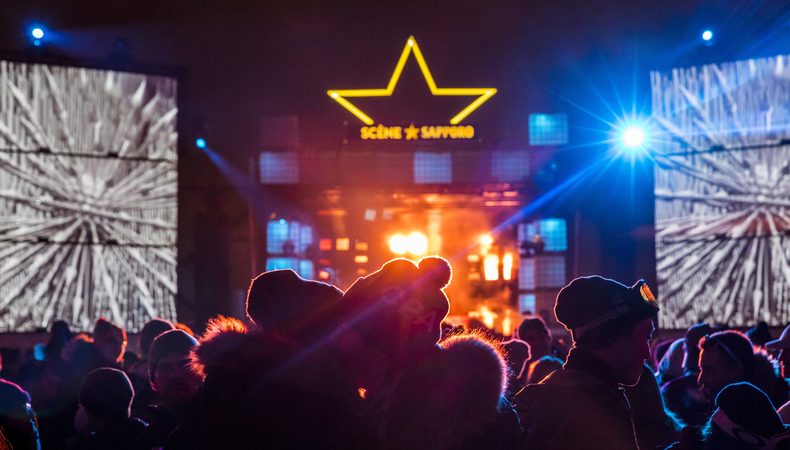 The snowy season is no excuse to avoid outdoors in this party town. Igloofest, the self-described “coldest music festival in the world,” draws tens of thousands to Montréal every winter for a subzero EDM dance party to a line-up of international DJs. Don’t forget to dress to impress as there’s a contest for the coolest-looking snowsuit. MONTRÉAL EN LUMIÈRE warms up February with world-class food, wine, live music, outdoor performances, interactive art and dazzling light installations right in the heart of downtown. Don’t miss the festival’s fabled Nuit Blanche, an all-night carnival crawl of art galleries and installations dotted all over the city. Another winter festival includes the family-friendly Fête des neiges de Montréal, which offers days full of frosty activities and live music.

Alexandra Gauthier is a young Montrealer who loves to eat, drink and be merry with friends in neighbourhoods all over the city.