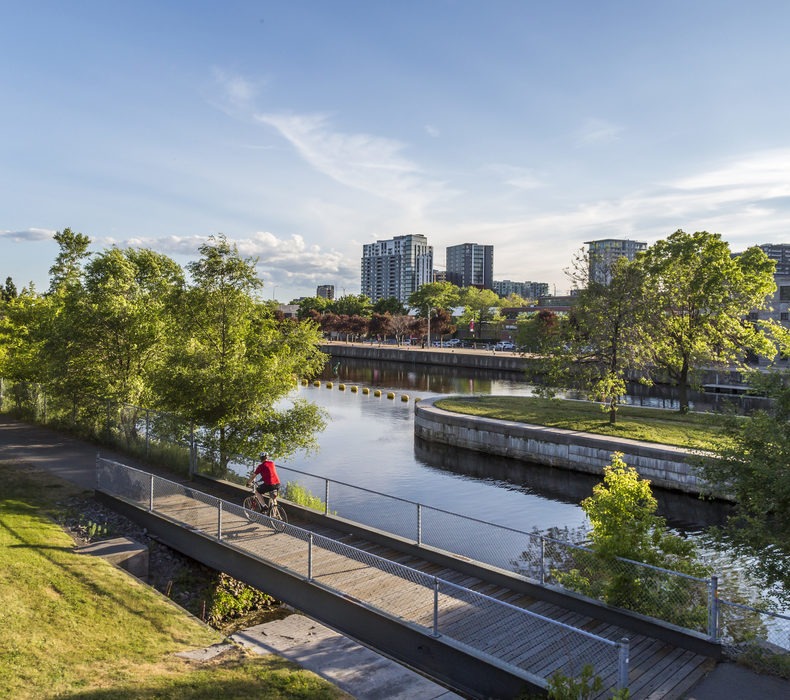 Guide to all things biking in Montréal

Experience Montréal like a local by hopping on a bike this spring, summer and fall. With over 700 kilometres (435 miles) of bike paths, high-quality bike rentals, tours and a popular bike festival, it’s a breeze to discover Montréal’s many neighbourhoods, get to and from events, and see the city sights.

Note: Due to current public health directives, some businesses and attractions may be temporarily closed or may have reduced hours or services. We recommend that you call or visit their websites to get the most up-to-date information. For more details on the current situation in Montréal, click here. 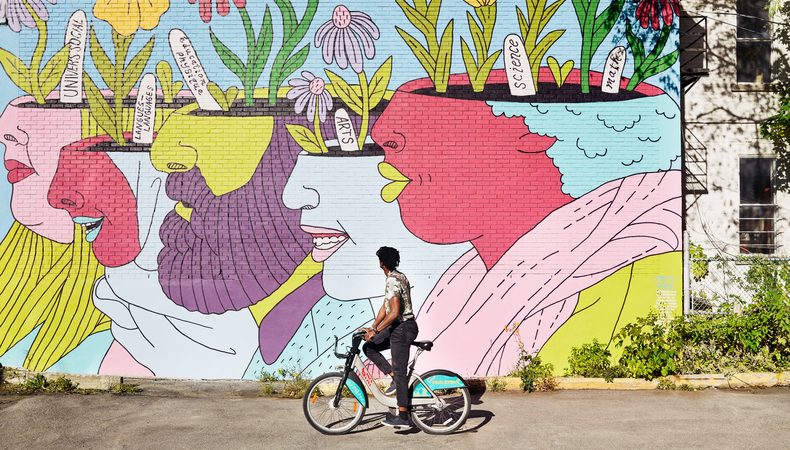 Montréal’s ever-expanding bike system has been named one of the most bike-friendly in North America by the Copenhagen Design Index, credited with inspiring other major cities around the world to build more bike paths, encourage awareness of cyclists and do it all in style. Go your own way by renting new bikes from the best in the city, bringing your own bike, trying out Montréal’s BIXI system, or taking a bike tour suited to your tastes – see our guide to bike tours and private tours in Montréal for ideas! 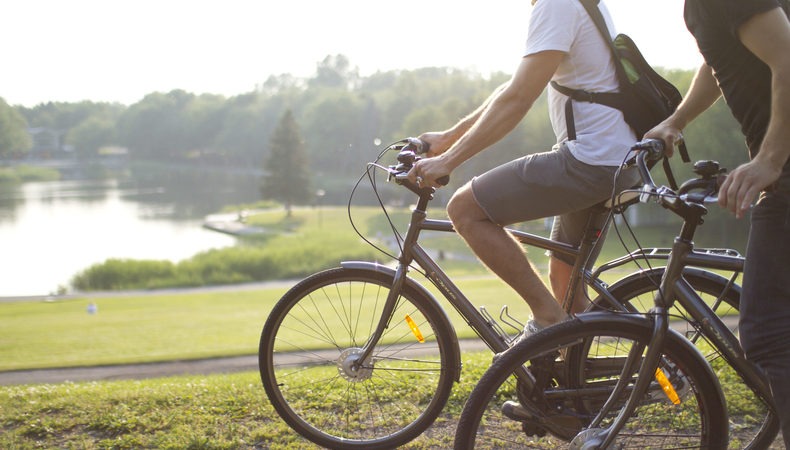 Make bike excursions smooth by plotting your route beforehand with maps from Vélo Québec, Montréal On Wheels and La Route Verte. Tune your bike up, grab a map and a coffee at La Maison des cyclistes and Le Picnic Vélocafé across from Parc La Fontaine on Rachel Street. Biking downtown is made easy by the Maisonneuve Boulevard and Berri Street bike paths, running from the Grande Bibliothèque near Berri-UQAM metro station to shopping and museums downtown, to the city’s westside, where a stop in Westmount Park adds more greenery to the trip.

Among the most scenic bike paths is the Lachine Canal multipurpose path – beginning in the Old Port of Montréal, it runs for almost 15 kilometres along a still-functioning boat canal, past the Atwater Market, and all the way to the Musée plein air de Lachine in the west, a beautiful sculpture garden right on the river. Once out there, cyclists can continue on a bike path through LaSalle and Verdun, along the St. Lawrence waterfront cycling path, stopping at a nature sanctuary and watching brave surfers tackle the Lachine rapids.

Another scenic go-to, with views of downtown and the St. Lawrence River, is Parc Jean-Drapeau, located just south of downtown on an island in the middle of the river. It features 25 kilometres of bike paths plus the Formula 1 Grand Prix du Canada’s Circuit Gilles-Villeneuve, an outdoor swimming pool and a lake. The paths form part of Québec’s Route Verte, the longest cycling path in North America, and the Great Trail, the world’s longest recreational trail. Ride to the park from the Old Port via the de la Concorde Bridge or from the South Shore via the Victoria Bridge bike path – or, for the more daring (and for the view), via the Jacques-Cartier Bridge. Or take the metro: bikes are welcome in the first car of each train to Parc Jean-Drapeau station when summer festivals aren't happening in the park.

North of downtown and the Plateau, the pastoral Gouin Boulevard bike path, one of the longest in the city, runs alongside the Rivière des Prairies, while further west, there’s the West Island Heritage Bicycle Trail. Head off-island by boat along the St. Lawrence River with Navark, welcoming bikes on board for trips to large nature parks, from Boucherville to Îles-de-Boucherville, Lachine to Châteauguay and Notre-Dame-de-l’Île-Perrot to Pointe-des-Cascades. For more on these routes and bike routes outside the city, consult the cycling experts at Vélo Québec.

Explore not only the city centre but the entire island of Montréal on a high-quality, new rental bike available for reasonable fees from shops large and small. In the bustling, tourist-central Old Port, the long-running and trusted Montréal On Wheels entices with themed tours and everything from high-performance road bikes to tandems and hybrid bikes with safety-certified child carriers. In the urban-residential Plateau neighbourhood, friendly and fun Fitz Montréal Bike Tours rents bikes of all kinds and offers themed private and group bike tours around town. Spade & Palacio rents bikes and takes riders on a variety of themed tours, from food hotspots to off the beaten path.

In the city’s south end, near the picturesque and plentiful Atwater Market, Ma Bicyclette offers rentals and guided tours of the industrial-gone-natural Lachine Canal, riverside paths, the city and beyond. Add zip to your ride at Dyad, specialists in new electric bikes and scooters as well as conventional bicycles. With two locations, at Parc Jean-Drapeau and in the Old Port, Ecorecreo is another go-to pro for electric bikes, quadricycles and Segways. 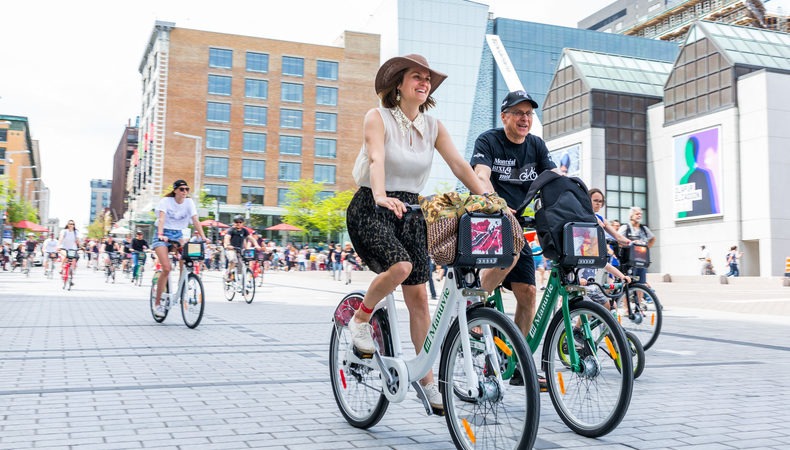 For a no-nonsense way to get from A to B within the city, BIXI is a stellar way to go. Since its inception in 2009, Montréal’s city-wide bike system has expanded to include hundreds of stations across the city in all directions. Unlike rental bikes, the BIXI bikes are primarily meant for short commutes and available from April through to November: one-way, daily, three-day or monthly and seasonal access options let riders bike free for up to 30 minutes at a time all day and night, from any station to another – there’s an additional fee automatically added to rides longer than 30 minutes.

Each sturdy bike has front and back lights, a front carrier and adjustable seat. This year, the BIXI network features 725 new electric BIXIs and 83 new electric stations, as well as a variable pricing model. Note that while the same road rules apply to BIXI riders as they do to all other cyclists in Montréal, electric bike riders must by law wear a helmet due to the speeds the bikes can reach (32 km/hr, for the curious). 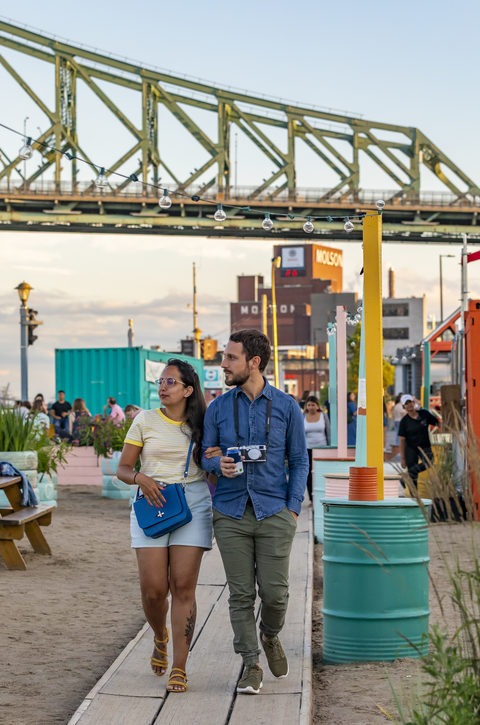 Make your own cycling fun anytime as couple, a family or solo by packing a picnic for the road – whether the fresh baked bread (or bagels), cheese and wine or something more gourmet picked up at one of Montréal’s public markets, a local deli, sandwich shop or bakery. Take your time and roll into a city park, including the long and winding path in Mount Royal Park, Parc La Fontaine in the Plateau, Parc Laurier and Parc Jarry (both also home to outdoor swimming pools) or any of the city's many green spaces and their surrounding restaurant-and-shopping packed neighbourhoods. Whatever way you pedal the city, biking can take you to the biggest attractions and the most out-of-the-way corners of Montréal.