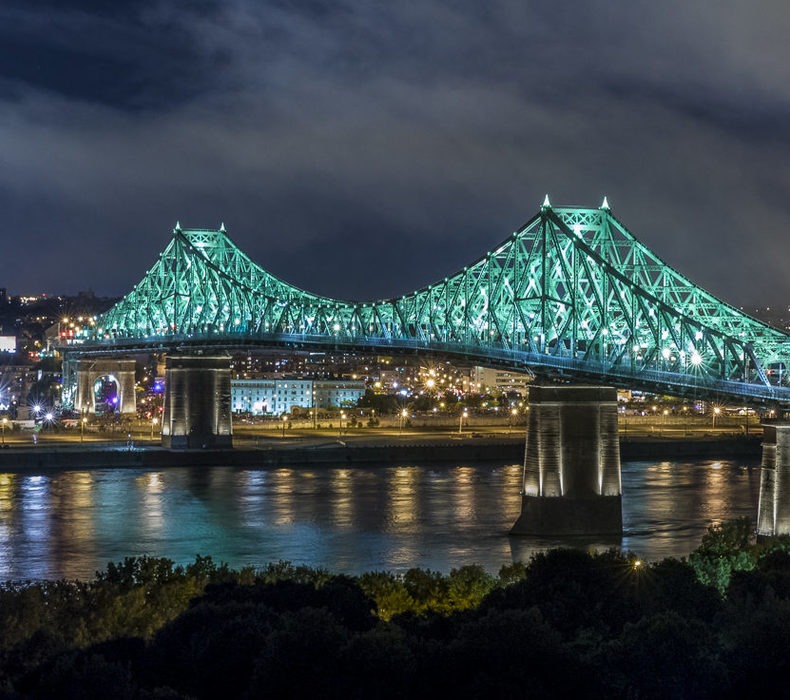 Montréal during the day and Montréal during the night is a tale of two cities. After dark, the city transforms: the bare stone walls of Old Montréal become history projected, while the Jacques-Cartier Bridge lights up in flashes of colour over the St. Lawrence River. Building facades in the entertainment district turn into movie screens, and the power of light to trick the eye gives some of Montréal’s first buildings all new life. Here’s just a few of Montréal’s light installations you won’t want to miss. 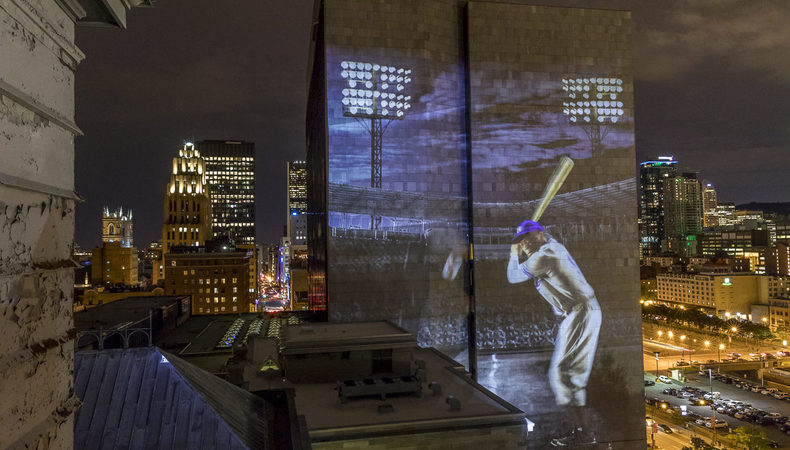 The Montréal en Histoires phone app gives the full historical breakdown of Old Montréal, presenting suggested routes, keeping track of where you are and showing things as they once were. But after dark it’s an entirely different experience as the projections of Cité Mémoire bring the past back to life via one of the biggest urban lighting installations in the world. Created by Michel Lemieux and Victor Pilon in collaboration with Michel Marc Bouchard (you can read about them all here), Cité Mémoire is a crown jewel of the city that’s de rigueur for any visit. Let the app guide you between installations throughout Old Montréal and the Old Port (plus one at the legendary Fairmont The Queen Elizabeth hotel), and keep your camera at the ready – these things photograph beautifully. (Insider tip: Keep a sharp eye out for the alleyway that becomes a stream flowing down towards the St. Lawrence and take a virtual wade in the water made of light). 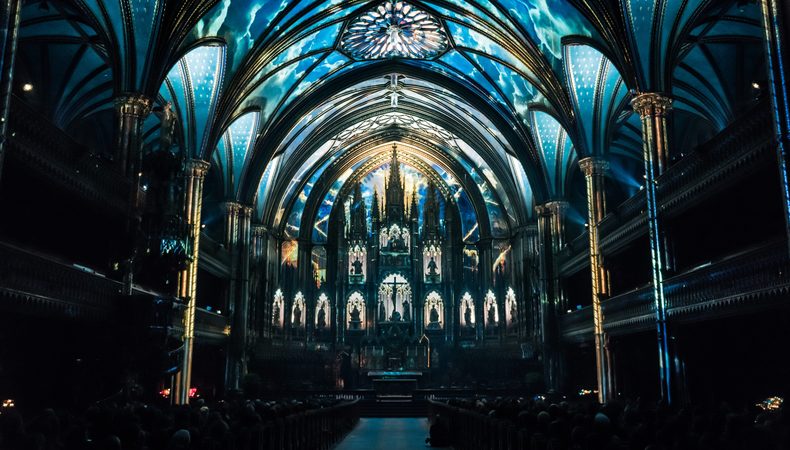 A mind-blowing creation of the masterminds at Montréal’s internationally renowned multimedia entertainment studio Moment Factory, AURA literally reconstructs the Notre-Dame Basilica’s interior with lights and sound. It’s an experience you won’t forget – but be sure to arrive a little bit early to explore the other impeccable installations in place that almost give the impression that this grand old church is a living and breathing being. 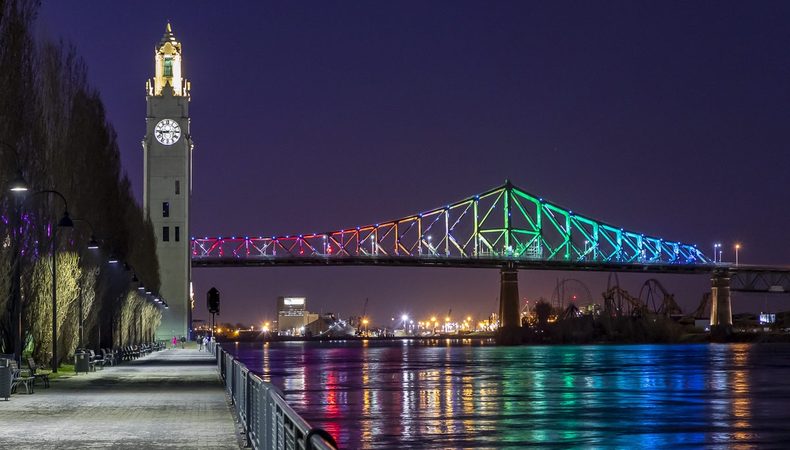 Another Moment Factory project, the photogenic Jacques-Cartier Bridge lights up nightly over the expanse of the St. Lawrence River. But it’s much more than just flipping on a switch – the way the bridge lights up is determined both by season and by the city’s mood, collected throughout the day from social media. Each ½ hour, a special animation sequence also takes place, and mentions of #illuminationMTL in your online posts will also have an effect you can see before your eyes. 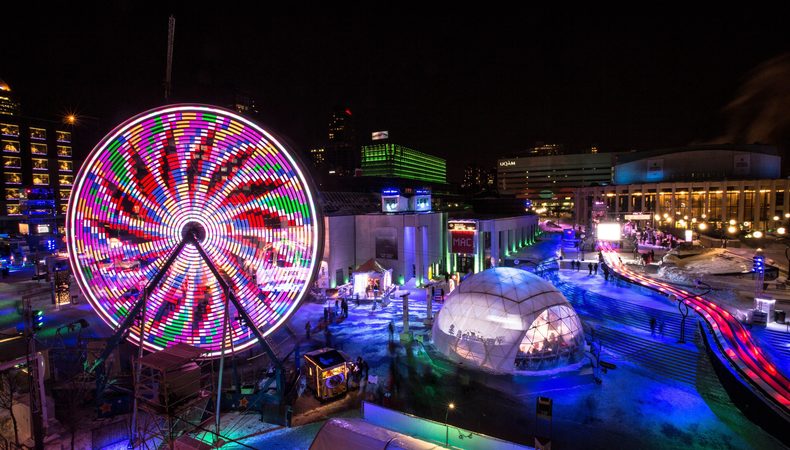 Throughout the year, both the Quartier Latin and the Quartier des spectacles entertainment districts play host to cutting-edge illuminations that punctuate the night sky. While some are permanent – such as the large-scale projections on the  face of the Université du Québec à Montréal campus, others, like the seasonal Luminothérapie and Montréal en Lumière, transform these districts into playgrounds of light throughout the winter with annually changing installations both interactive and awe-inspiring. It’s the perfect opportunity to bundle up and get exploring on a chilly night.

The Pointe-à-Callière museum was built on the very spot of Montréal’s first foundations, and tells Montréal’s history via artefacts, excavations and exhibitions ranging from the fur trade to Expo 67 and beyond. But illumination fans won’t want to miss a pair of experiences within the museum’s walls: a rapid history of the island told through multi-language narration and projections right on some of the city’s first stones called Generations MTL, and the Memory Collector that runs below the streets of Old Montréal. Built in the original collector sewer, the Memory Collector is aglow with lustrous lighting and sound, promising an unforgettable walk through history. 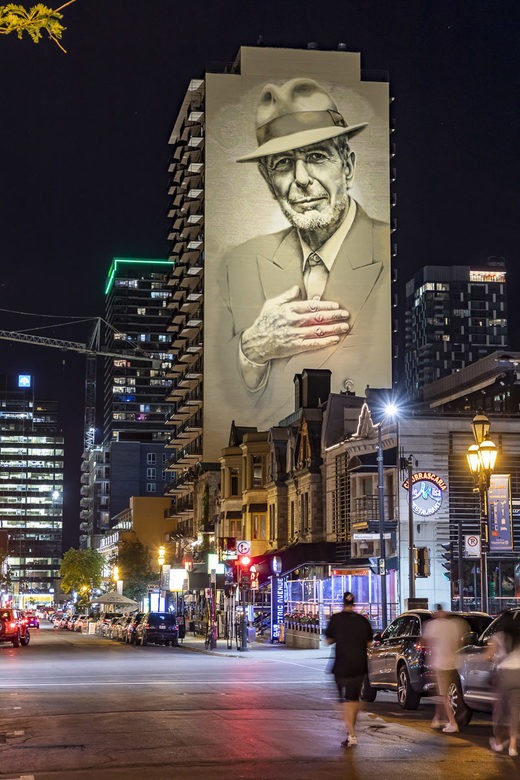 Poet and musician Leonard Cohen is a patron saint of local culture and history, commemorated by two large murals painted after his death in 2016. Perfectly visible from the Mount Royal viewpoint, the 1,022 square metre Tower of Songs mural on Crescent Street is now also bathed in light every night of the year – including a touching shade of red over his heart from which he wrote and sang for decades as a proud Montréaler. It’s a moving tribute that glows.

Wander into Montréal’s Gay Village, for a walk under the Proud Colours lights gracing Sainte–Catherine Street tell that the proud history of the sexual and gender diversity flags raised in pride by the LGBTQQIP2SAA community. Reflecting all the colours of the rainbow and more, #ProudColoursMtl is a shining, moving gesture of pride. 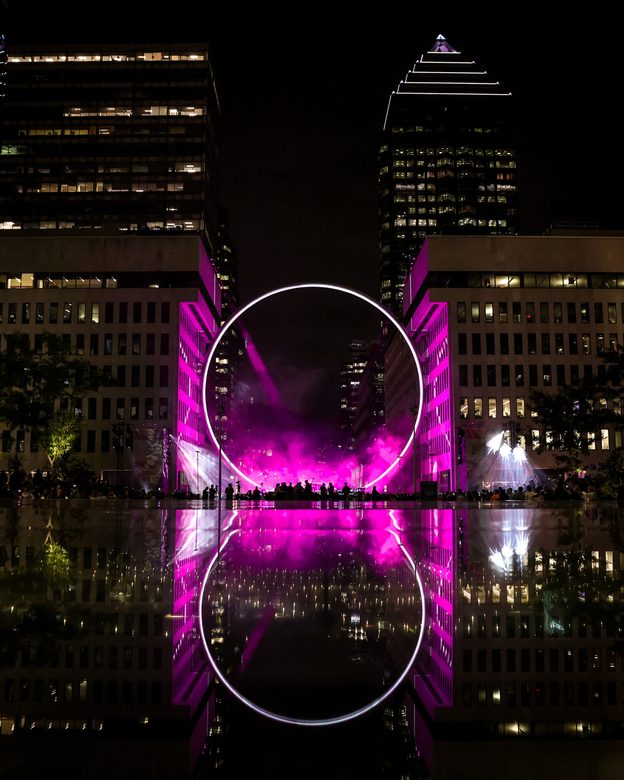 As part of Place Ville Marie’s multi-million dollar renovations, Montréal’s newest icon The Ring is all lit up nightly. Already a favourite of #selfies fans, if you angle your camera just right you can also capture a glimpse of the Cross up on top of Mount Royal itself. And that’s what we call a full circle #mtlmoment!