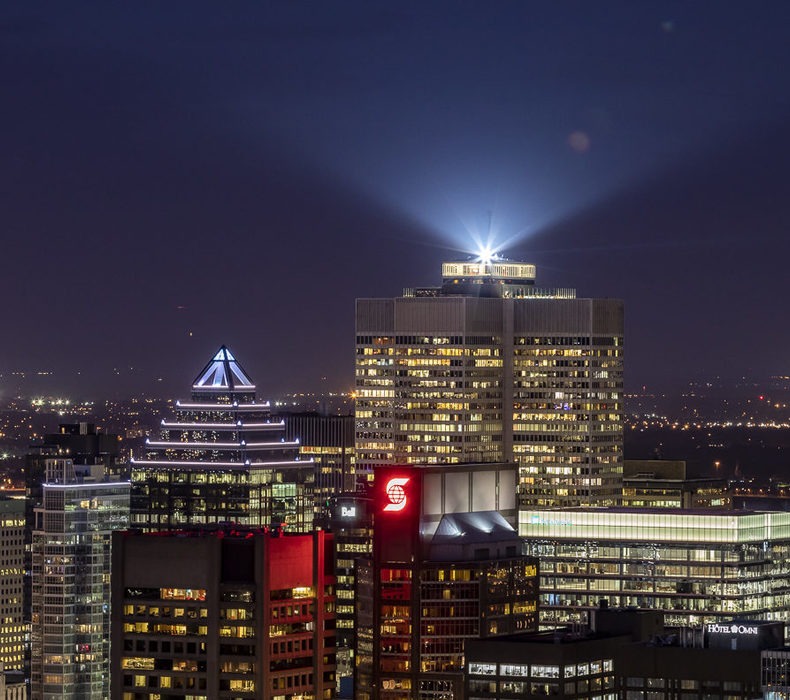 The four beaming rays from the Royal Bank of Canada’s rotating beacon on top of Montréal’s landmark Place Ville Marie skyscraper can be seen from the air more than 160 kilometres away, and has bathed the city in a protective light that has been seen by tens of millions of people since the beacon was installed atop Place Ville Marie in 1962.

When PVM opened in 1962, it was the tallest skyscraper in the Commonwealth, and third-tallest building on earth outside the United States. The cruciform skyscraper was named after the Catholic colony of Ville Marie, founded at what is now Montréal in 1642, and today towers over the borough of Ville-Marie in downtown Montréal. The Royal Bank’s original beacons were installed in 1957 on top of their old head office, located at 360 Saint-Jacques Street in Old Montréal, after RBC building manager Marshall Smythe saw a photograph of the beacons on the Empire State Building in New York.

An RBC document reports the beacons were designed by RBC chief engineer Edward Gilbert and manufactured by Northern Electric: “The (four) beacons took eight months to design and build and consisted of four Crouse Hinds modified type DCB-36 rotating airport beacons. Each unit was fitted with one Westinghouse Short arc Mercury Vapor Model SAH 2500-A lamp. The lamps were a very recent development and were of extremely high output and efficiency. They were the brightest continuous burning man-made light sources available at the time, and ‘approached the brightness of the sun.’”

When the RBC moved their head office to PVM in 1962, the beacons were removed from 360 Saint-Jacques Street and installed on top of the new 47-storey skyscraper. Then in 1974, when the beacons wore out, RBC’s then-chief engineer Ted Gilbert redesigned the beacon with lighting expert Claude Neon. 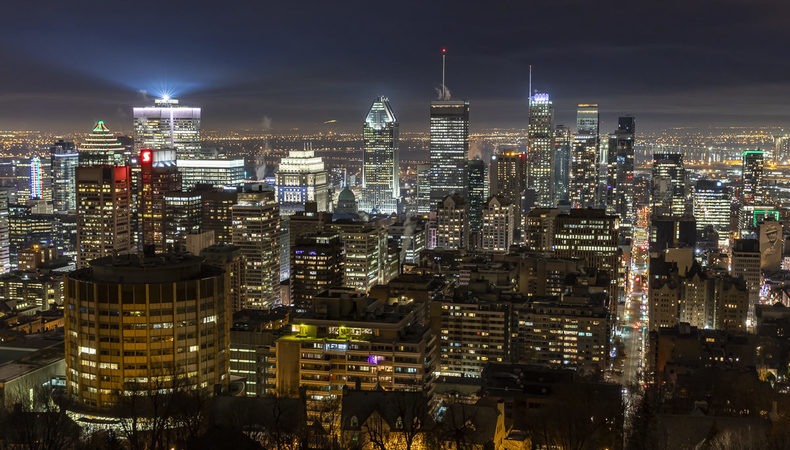 The RBC reports, “They designed a unit with a rotating platform that held all four beacons. Made of metal, it sat in the middle of the roof and the platform never stopped rotating. If it did, the glass reflectors in the beacons would overheat in the sun’s rays and melt. When the platform was stopped to perform maintenance on the (2,500-watt bulb) lights, the beacons had to be faced north. The beacons were wired to an astronomic timer that turned them on at sundown, and off at 1 a.m.” The rotating RBC beacon – operated by the Royal Bank of Canada –– has become an iconic symbol of Montréal and to this day continues to rotate 365 nights each year. It can be seen from the air more than 160 kilometres away; in fact, the RBC once received a letter from a lost pilot who thanked the bank for helping him find his way home.

Says Denis Dubé, RBC director of media and public relations, “The RBC beacon is an important symbol, a landmark for all Montrealers that expresses the dynamism and effervescence of life in Montréal.”