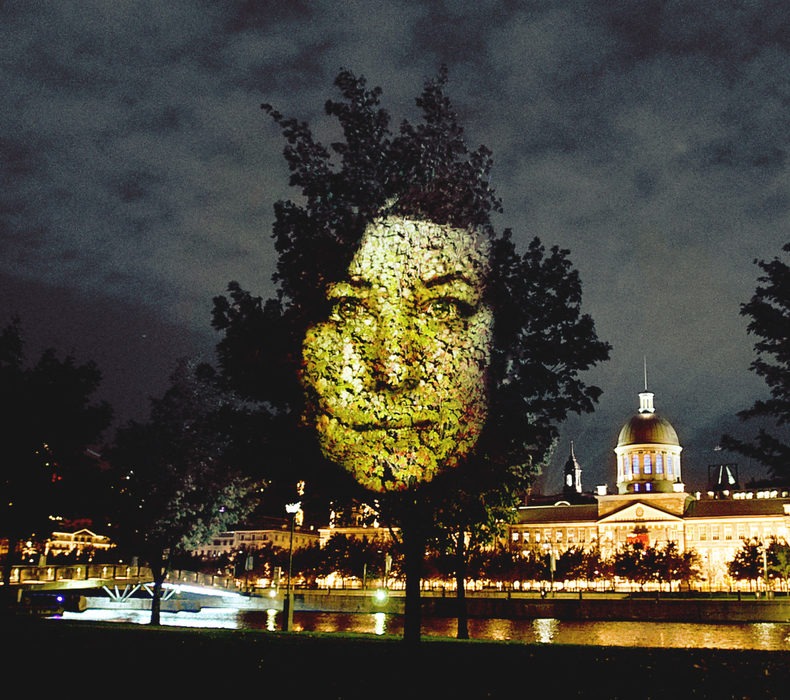 Cité Mémoire brings the past to life in Montréal

The storied history of Montréal comes to life with Cité Mémoire, one of the largest outdoor video-projection installations in the world. Cité Mémoire is an urban multimedia experience that tells the stories of famous as well as little-known Montrealers who have shaped the city and the world. 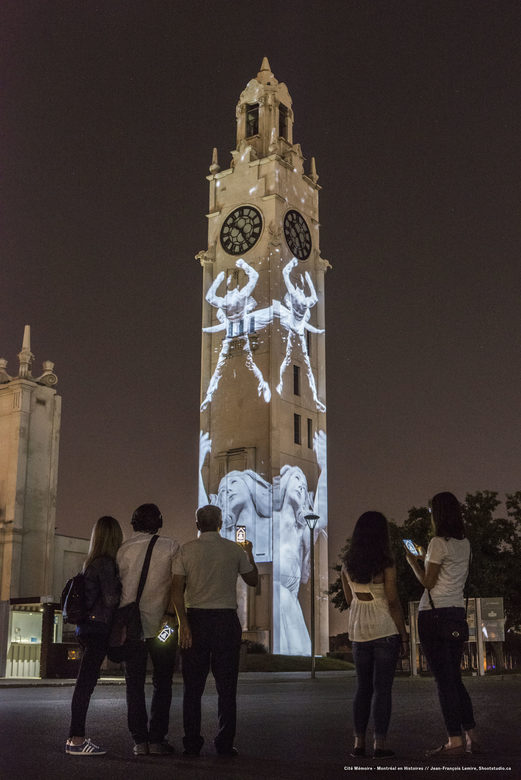 Tales of the city

Inaugurated in May 2016, Cité Mémoire is an ongoing art installation that currently features more than 25 tableaux composed of images, dialogue and music projected on walls, in alleys, on the ground and on trees in historic Old Montréal, the Old Port of Montréal, downtown and Montréal East.

“We chose stories with themes and values central to Montréal’s identity,” says Michel Marc Bouchard. “Our screen – our canvas – is the city itself.”

Victor Pilon points out more than 800 people worked on this project, including 400 artists and craftspeople. Says Pilon, “We wanted to create something that had never been done before, something innovative.”

The critically-acclaimed Cité Mémoire installation has proven to be a big hit with locals and visitors alike, and is popular year-round.

Every picture tells a story

The Cité Mémoire tableaux tell the stories of such Montrealers as Marguerite Bourgeoys, the French founder of the Congregation of Notre Dame of Montréal who has been declared a saint by the Catholic Church, sports icons Jackie Robinson and Maurice “Rocket” Richard, as well as the gay soldier stationed with the French garrison in 1648, who was caught having sex with another man. The soldier was given a choice: die or become the first executioner of New France. The gay soldier took the executioner job.

There are also tableaux about The Jewish Children’s Transport train, about a thousand orphans who survived Nazi concentration camps and were adopted by Montrealers; the burning of the Parliament building in Old Montréal in 1849; Montréal’s fabled Sin City era and jazz heyday, set to the rhythm of Montrealer and jazz icon Oscar Peterson’s piano; and about falling in love in romantic Montréal, set to Montréal songwriter Leonard Cohen’s iconic song Suzanne.

Launched in December 2021, the La Naissance du monde (The Birth of the World) tableau with its interactive river enables visitors to discover the Anishinabe legend of the beaver and the muskrat by Algonquin storyteller Véronique Thusky. It is located in Place Paul-Émile Borduas in the Latin Quarter, between the BAnQ and Rue Saint-Denis. 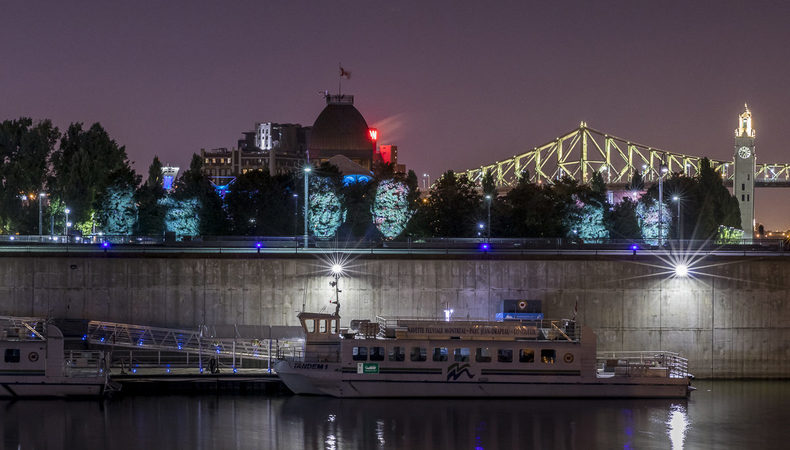 The tableau about entrepreneurial couple Alphonse and Dorimène Desjardins – who founded the Caisses populaires Desjardins, the first successful savings and credit union in North America – was unveiled inside Complexe Desjardins in February 2020.

A new version of the TIOHTIÀ:KE VILLE-MARIE tableau, originally presented in Old Montréal, has been added to Cité Mémoire’s downtown circuit and is now projected on Esplanade PVM at the west entrance to the lobby of 1 Place Ville Marie, near the Cathcart terrace. Depicting the early years of Ville-Marie, the tableau juxtaposes the reality of that era as perceived by Jeanne Mance, co-founder of Montréal in 1642 and founder and administrator of the Hôtel-Dieu de Montréal hospital, with that of the Kanienʼkehá꞉ka Iroquois nation living on the land, as personified by a great warrior.

Over at the Fairmont The Queen Elizabeth hotel, the Cité Mémoire Agora is a historical tableau continuously projected onto the panoramic walls of the Queen Elizabeth’s agora. It is a poetic evocation of the great periods in Montréal’s history and some symbolic places and compelling people who used to live there.

Another tableau projected in the Agora emphasizes the war protest movement of the late ‘60s by illustrating John Lennon and Yoko Ono’s famed Bed-in for Peace at the Fairmont The Queen Elizabeth in 1969. This is where the anthem Give Peace a Chance was composed and recorded.

There is also the interactive river, an underground passageway leading from the Fairmont The Queen Elizabeth to Place Ville Marie. The interactive underground river reacts to people walking by. People can interact with its components and generate sea foam, break its ice and move clouds.

For the schedule of the tableaux at the Fairmont The Queen Elizabeth, contact the hotel at 514-861-3511.

Visitors can also witness the construction and history of the landmark Fairmont The Queen Elizabeth in augmented reality via the free Montréal en Histoires mobile app. 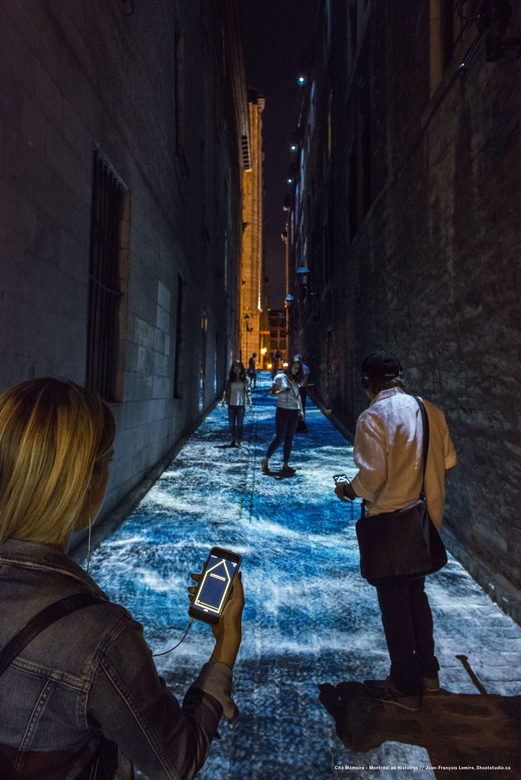 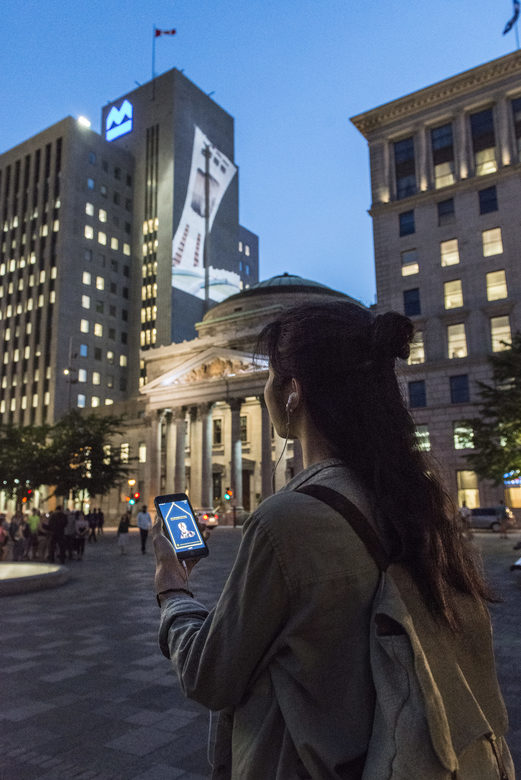 Visitors can experience the full Cité Mémoire multimedia experience by downloading the free mobile app on the App Store or Google Play. The app provides Cité Mémoire’s entire soundtrack as well as historical context for each tableau in four languages (English, French, Spanish and Chinese).

Available 24 hours a day, the app also features some 100 additional points of interest and augmented reality segments in addition to the tableaux, enhancing strolls in Old Montréal where a free Wi-Fi network – MTLWiFi – is accessible to all. 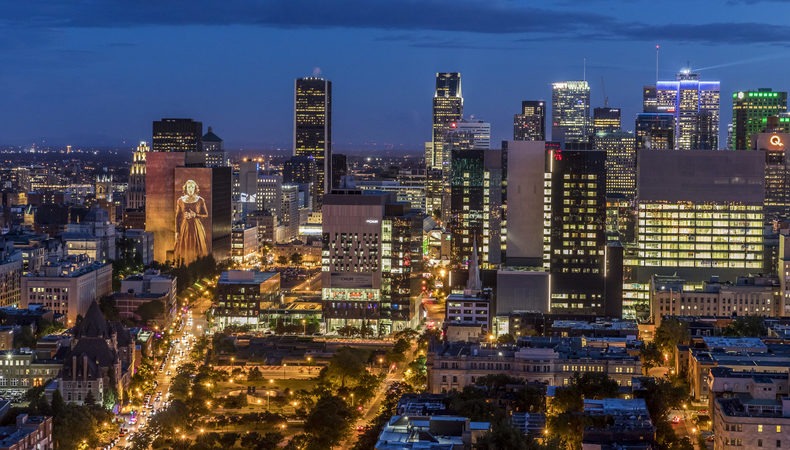 Cité Mémoire’s Grand tableau is presented on the evenings of projections, after dusk each hour on the hour at Champ-de-Mars.

The 90-minute Cité Mémoire public guided tours are temporarily unavailable, but private tours and the two-hour historical scavenger hunts for schools are back.