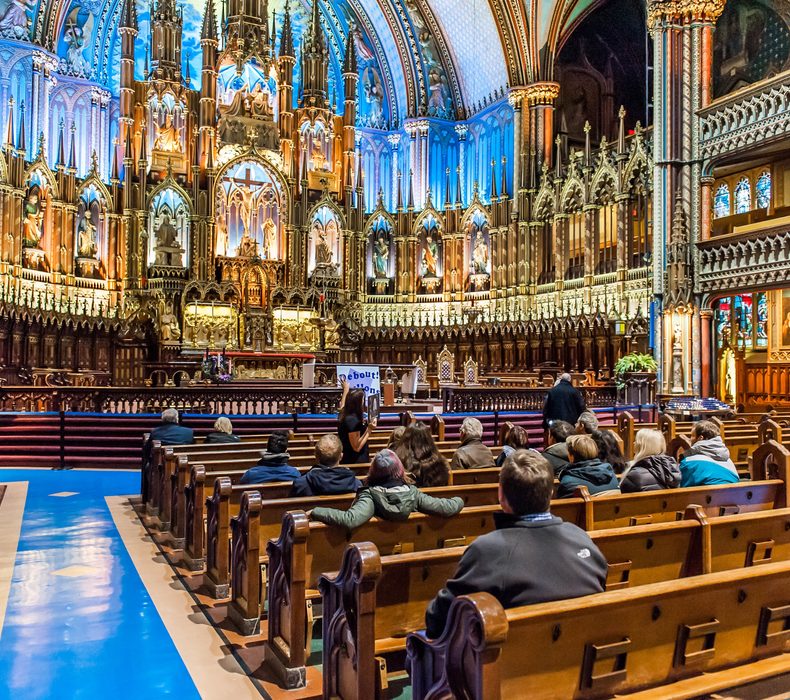 When celebrated American writer Mark Twain visited Montréal in 1881, he famously said, “This is the first time I was ever in a city where you couldn’t throw a brick without breaking a church window.” And it’s true: wherever you look around the city, you are likely to see an elegant steeple or a majestic dome on the horizon. For those seeking a spiritual journey, or who simply want to enjoy the architectural splendour of Montréal’s many religious historic sites, here are some of the most beautiful churches in Montréal. 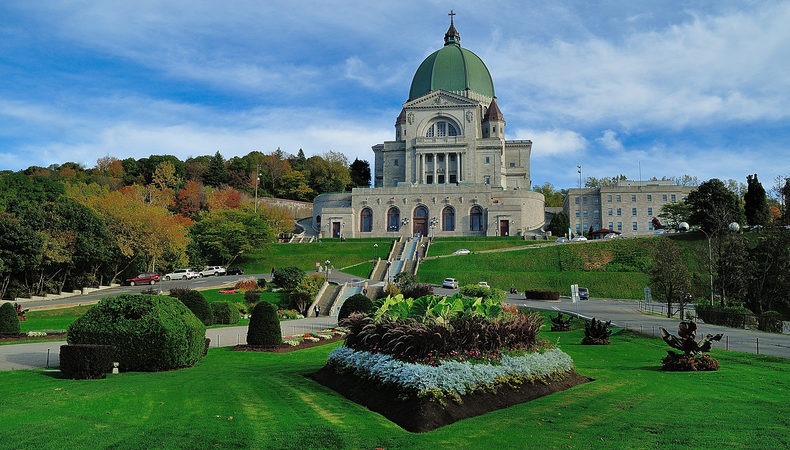 The iconic dome atop the mountain

Saint Joseph’s Oratory of Mount Royal is one of the world’s great Catholic basilicas  Montréal’s majestic Saint Joseph’s Oratory of Mount Royal is a designated National Historic Site of Canada and one of the world’s great Catholic basilicas. Saint André of Montréal, known locally as Brother André, began construction in 1924 to honour Saint Joseph, the stepfather of Jesus, but did not live (1845 – 1937) to see construction completed in 1966. The exterior of the basilica is designed following the lines of the Italian Renaissance, its colonnade features Corinthian-style pillars and its dome is not just the third-largest of its kind in the world (after the Basilica of Our Lady of Peace of Yamoussoukro in Côte d’Ivoire and Saint Peter’s Basilica in Rome) but is the highest point in Montréal.

Inside lie the remains of Saint André who in 1978 was declared “venerable” (when the Vatican accepts a person is responsible posthumously for two miracles). Known as the “Miracle Man of Montréal,” Saint André is credited with thousands of miraculous healings. More than 2 million people visit the Oratory and its museum each year, including pilgrims who climb from the street to the crypt church on their knees on two parallel flights of 283 concrete steps separated by a central flight of 99 wooden steps.

Modelled on a legend

Highlights include the grand dome ceiling, a great organ built by Casavant Frères, a red copper and gold leaf baldachin, legendary sculptor Louis-Philippe Hébert’s White Crucifix, considered to be one of the most important pieces of religious sculpture in Québec, as well as nine paintings depicting historical events in the early days of Montréal. 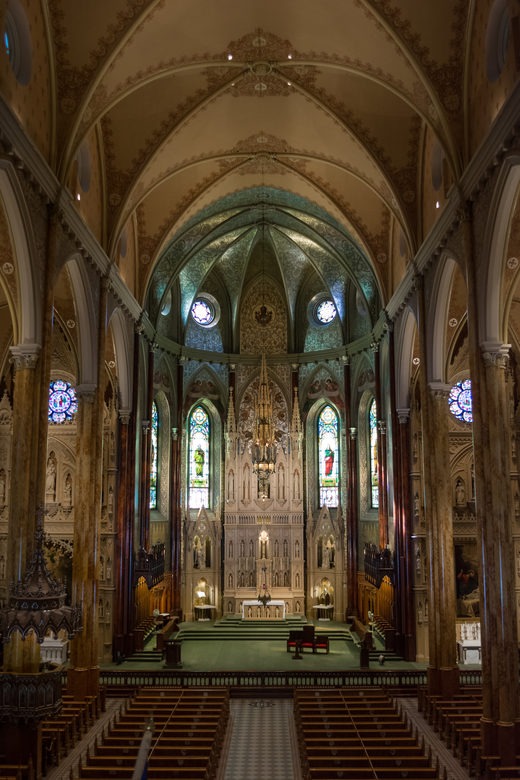 St. Patrick’s Basilica is the oldest English-speaking Roman Catholic Church in Montréal, renowned for its historic links to the Irish-Canadian community. The church was built in the Gothic Revival style and celebrated its first mass on St. Patrick’s Day, March 17, 1847.

A designated National Historic Site of Canada, Saint Patrick’s interior is a feast for the eyes. Featuring motifs combining the French fleur de lys and Irish shamrocks, a Casavant Frères pipe organ dating to 1895, and memorials to two famous parishioners: Thomas D’Arcy McGee, a Father of Confederation who was assassinated in Ottawa in 1868, and the great Québécois poet Émile Nelligan who was baptized in the church on Christmas Day 1879. 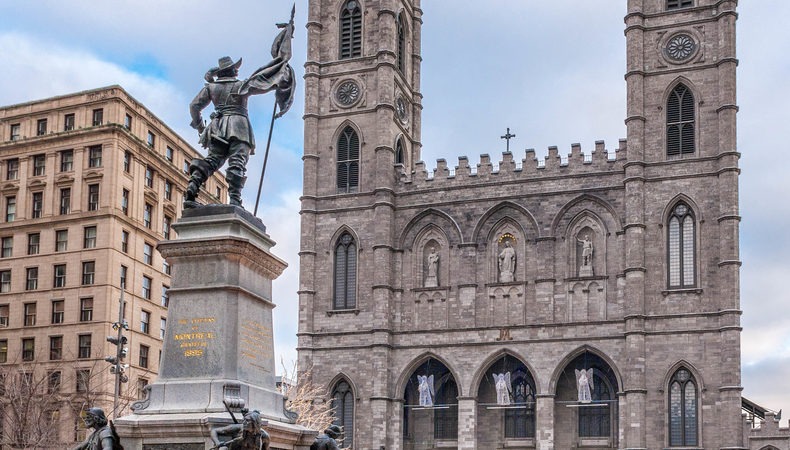 The grand dame of Old Montréal

The Notre-Dame Basilica of Montréal is a crown jewel in Québec’s rich religious heritage, where global superstar Luciano Pavarotti performed his 1978 Christmas concert, and where Céline Dion got married to René Angélil in 1994. Now a designated National Historic Site of Canada, the basilica replaced the tiny parish church of Notre-Dame that was originally built on the site in 1672. The basilica was designed by Irish-American architect James O’Donnell (who is also the only person buried in the church’s crypt) and built between 1824 and 1829.

With its two soaring towers, the basilica is a splendid and dramatic example of the Gothic Revival style, with a grand and colourful interior filled with hundreds of intricate wooden carvings and religious statues, as well as a Casavant Frères pipe organ that dates back to 1891. The historic site is popular year-round with tourists and locals alike, and regularly hosts concerts by orchestras, chamber groups and organists.

Our lady of the harbour

Visitors are transported back through time at the Marguerite Bourgeoys Historic Site in the heart of Old Montréal. Built in 1771 over the ruins of an earlier chapel, Notre-Dame-de-Bon-Secours also houses an archaeological site, plus a museum dedicated to Saint Marguerite Bourgeoys, the Frenchwoman who founded the Congregation of Notre Dame of Montréal and was the colony’s first teacher back in 1653 (Bourgeoys was canonized by the Vatican in 1982). Bourgeoys is buried in the church sanctuary.

Notre-Dame-de-Bon-Secours is also known as the “Sailor’s Church” not just because it overlooks the harbour, but because it was famed in the 19th century for being a pilgrimage site for sailors who arrived in the Old Port. Today, visitors can climb the chapel’s belvedere to join the “angels of Ville-Marie” and enjoy spectacular views of the Old Port and Old Montréal. 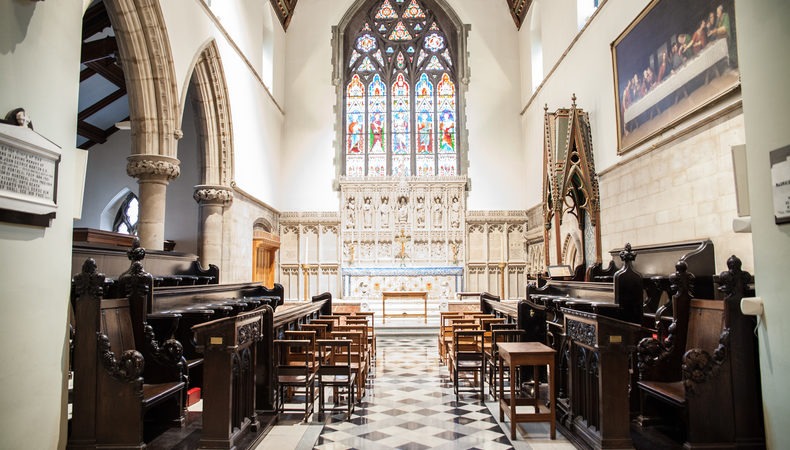 Neo-gothic majesty in the heart of downtown

The Christ Church Cathedral is a dramatic Neo-gothic structure, designed by architect and Gothic revivalist Frank Wills (1822–1856) who died before the cathedral was completed in the heart of downtown Montréal in 1859. As is common with Gothic churches, the cathedral was built in the form of a cross.

Today it is a designated National Historic Site of Canada and the seat of the Anglican Diocese of Montréal, located atop the underground Promenades Cathédrale shopping mall. The cathedral is the regimental church of the Canadian Grenadier Guards and hosts musical concerts year-round, including during the annual Montréal Bach Festival. Also, be sure to visit the Raoul Wallenberg Monument in the Wallenberg Square, a calm oasis behind the cathedral. 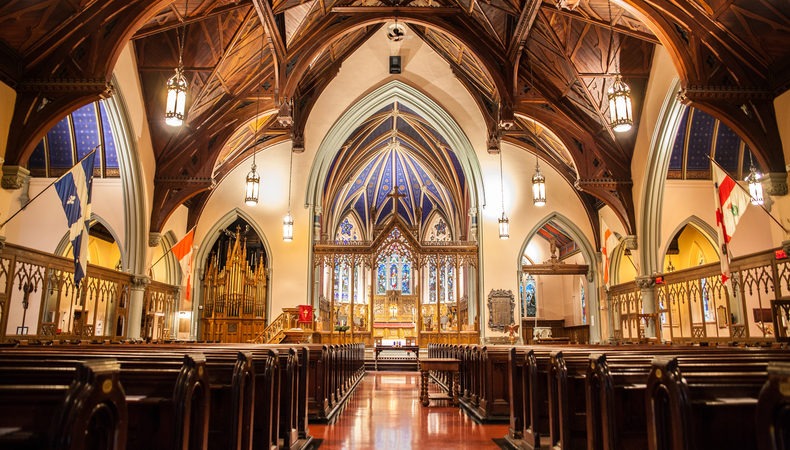 The picturesque St. George’s Anglican Church was constructed in 1869-1870 to plans by well-known architect William Tutin Thomas in the heart of downtown Montréal and was designated a National Historic Site of Canada because the stone building is a fine example of the High Victorian phase of the Gothic Revival style, with its steep gable roof and asymmetrically placed bell tower. The church features include magnificent stained glass windows and a tapestry used at the coronation of Queen Elizabeth II, donated by Westminster Abbey. St. George’s also hosts free musical concerts every Sunday at 2 p.m. 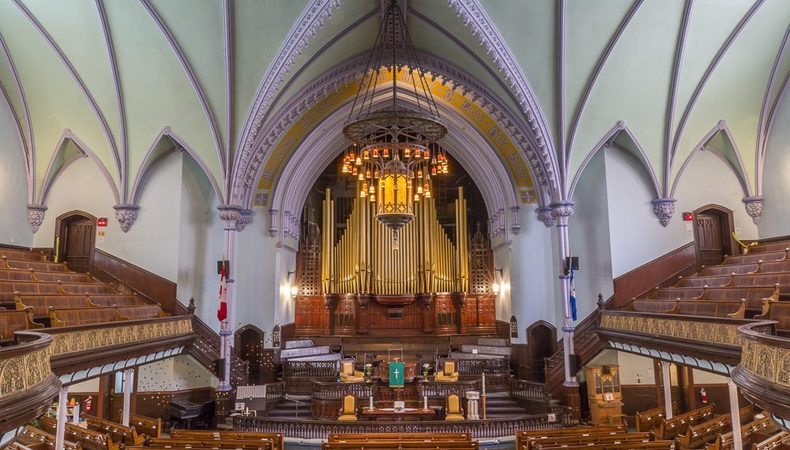 A historic treasure in the Entertainment District

The historic St. James United Church is an architectural gem located in the downtown Quartier des spectacles. Designed by renowned architect Alexander Francis Dunlop and built between 1887 and 1889 in the Gothic Revival style, the exterior is a Victorian neo-gothic image of a medieval French cathedral.

But its front exterior remained unseen to the public for nearly 80 years after a commercial façade was constructed in 1927 to cover operating costs. These commercial buildings were demolished in 2006, revealing the neogothic beauty of St. James. Inside, the church has amphitheatre seating for 1,200 and is home to a Casavant Frères organ, which has almost 4,000 pipes.

A beacon of hope in the Village

The Church of Saint Peter the Apostle is an architectural masterpiece built in Montréal’s LGBTQ+ Village between 1851 and 1853, the first work of noted ecclesiastical architect Victor Bourgeau. The church features of an organ made by Casavant Frères in 1908 and its stained-glass windows were made by the House of Champigneulle, in Bar-le-Duc, France, between 1853 and 1883.

The church is also home to the Chapel of Hope (Chapelle de l’Espoir) which opened in 1996 and is dedicated to the victims of AIDS. The Church of Saint Peter the Apostle prides itself on “welcoming all people unconditionally, no matter their sexual orientation.”

The Church of La Visitation-de-la-Bienheureuse-Vierge-Marie is the oldest church on the island of Montréal, dating back to New France, built between 1749 and 1752 in Ahuntsic. For its 100th anniversary, the church was expanded in 1850 by architect John Ostell in the English neoclassical style, and the bell towers each contain five bells that come from London and Rome. The church also hosts contemporary pop and classical music concerts.