While Montréal's stunning historic churches hold public mass that typically features organ music and choirs, some churches host non-religious cultural events and concerts as well. In the past decade, these sacred sites have doubled as places to hear live music that isn't necessarily religious in origin, including organ recitals, orchestra and choir performances, and jazz and rock concerts. As in many cities, Montréal's churches also host seasonal craft fairs and other events where locals and visitors gather. 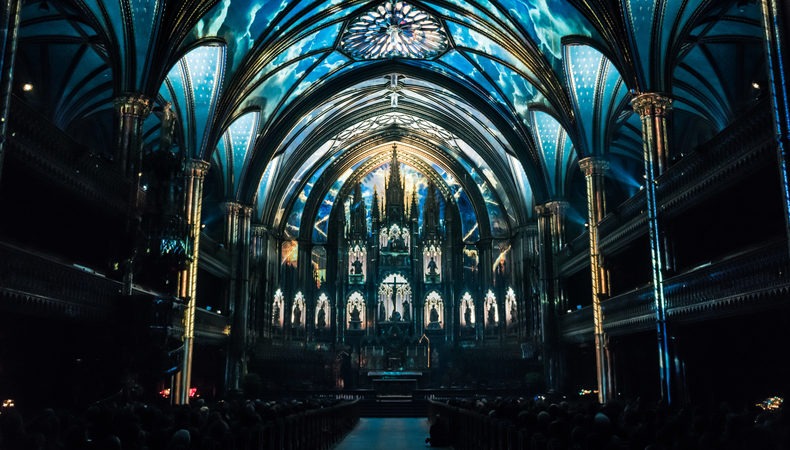 Starting in Old Montréal, you'll find one of the most well-known of Montréal's religious sites, Notre-Dame Basilica. A National Historic Site of Canada, the two-towered Gothic Revival-style basilica replaced the tiny parish church of Notre-Dame (originally built on the site in 1672) in the mid-1800s and was raised to the rank of Minor Basilica in 1982 by Pope Paul II. Today, the basilica opens its doors for daily mass and religious celebrations (Céline Dion married René Angélil there in 1994), sight-seeing, incredible multimedia show AURA by Montréal's Moment Factory, and several concerts throughout the year, including the Grand Organ Festival, featuring the 1891 Casavant Frères pipe organ.

Overlooking the Montréal harbour, Marguerite-Bourgeoys Museum and Notre-Dame-de-Bon-Secours Chapel is recognized for the angels and “Our Lady of the Harbour” gracing its roof and made famous in Leonard Cohen's Suzanne – previous to the song, however, the church was better known as the Sailor’s Church, leading ships to shore. Built in 1771 over the ruins of an earlier chapel in Old Montréal, the historic site is home to a church, archaeological site and museum open to the public. As well as mass, it hosts choir and organ performances throughout the year including Les Choralies Christmas concerts and Montréal Bach Festival concerts in late November and early December. 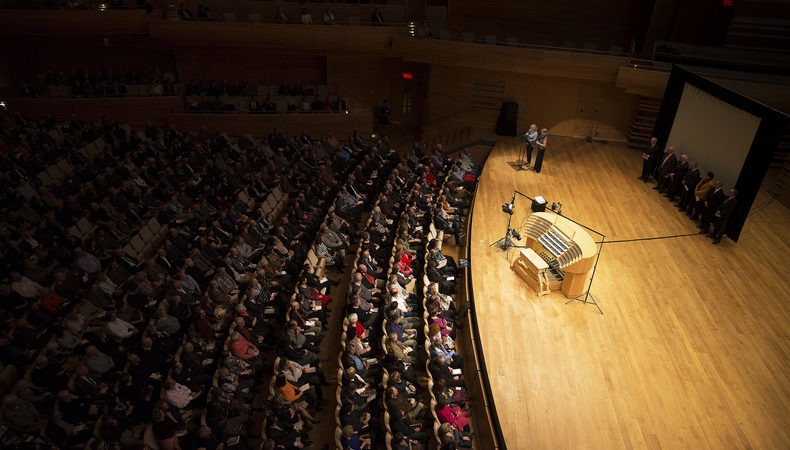 Along with the Bach Festival at Notre-Dame-De-Bon-Secours Chapel, more festivals use church spaces throughout the year. The CIOC Festival features concerts throughout October at Saint Joseph's Oratory, the Montreal Grand Seminary, Christ Church Cathedral and several other churches. In June, the Montreal Chamber Music Festival presents more than 300 concerts from Canada and abroad at several venues including Bourgie Concert Hall at the Montréal Museum of Fine Arts, formerly the 1894-built Erskine and American Church, adored with 20 stained-glass windows by Tiffany. Bourgie Hall also hosts numerous concerts and workshops throughout the year, including classical, new music and jazz presented by festivals and organizations such as the Arte Musica foundation and I Musici de Montréal. Also in June, the Montréal Baroque Festival presents baroque concerts by local and international musicians in the Madonna della Defesa Church in Little Italy, in cafés and outdoors in Philips Square.

Tell it on the mountain

Iconic for its sheer size (it's the highest point in Montréal) and massive dome (the third largest of its kind in the world), Saint Joseph’s Oratory of Mount Royal is also a National Historic Site of Canada and one of the world’s great Catholic basilicas. Walk up over 300 steps to the church doors or enter through the higher-altitude parking lot – either way you'll still find yourself traveling further up! Constructed between 1924 and 1966, the oratory welcomes two-million visitors each year to mass, to its museum of sacred art, and to see where the remains of Saint André rest. Classical and contemporary concerts round out the oratory's cultural offerings open to the public, including Sunday organ concerts, carillon recitals and special musical events in summer and winter alike. 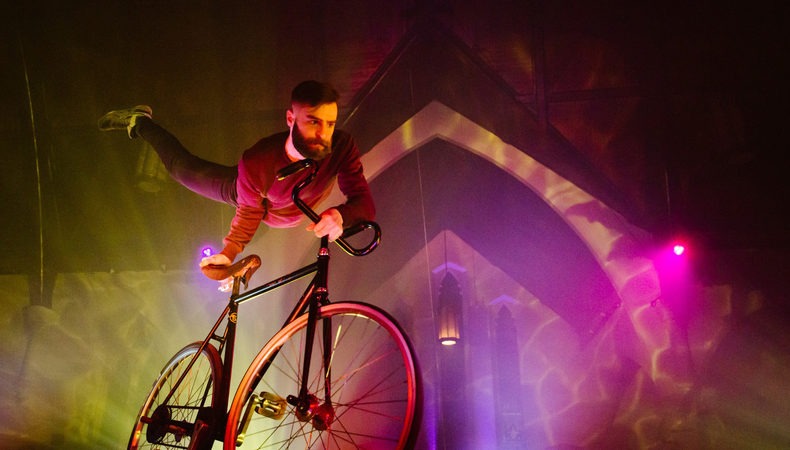 Also downtown, the Neo-gothic Christ Church Cathedral was built in 1859 and now sits atop the underground Promenades Cathédrale shopping mall. As well as being the seat of the Anglican Diocese of Montréal, the church hosts a weekly concert series of classical and traditional folk music presented by L’Oasis Musicale. A Presbyterian church built in 1932 in Gothic Revival style, the Church of St. Andrew and St. Paul presents sacred music on Sundays as well as Christmas concerts, a benefit concert featuring the A&P Choir and musicians from the Orchestre symphonique de Montréal in November, and the extremely popular CBC Christmas Sing-in.

Bordering Place des Festivals on de Bleury Street, Église du Gesù originally opened in 1865 and was renovated in 1992 to feature a lower-level 425-seat amphitheatre, one of the most acoustically excellent venues in the city. Both the chapel and amphitheatre act as year-round venues for concerts, comedy shows and theatre in partnership with the Festival International de Jazz de Montréal, Mundial Montréal and winter cultural festival MONTRÉAL EN LUMIÈRE. And for something a little different, watch a captivating and creative circus show in an elegant cabaret atmosphere at Le Monastère's Cabaret de cirque, located in 19th-century neo-Gothic Centre St Jax, formerly known as St James the Apostle Anglican Church.

Built in 1872 and rebuilt in 1912 after fires, Saint-Jean-Baptiste Church in the Plateau is the third largest church in Montréal (after Notre-Dame Basilica and Saint Joseph's Oratory). The church hosts classical, new music, gospel, pop and rock concerts in three sumptuous event spaces, including the main church, with its airy space and stained-glass windows, and Chapelle Saint-Louis for intimate concerts. Discover locally designed homewares, jewelry, clothing and accessories, art and more at designer craft fair Puces POP in late September and the Holiday Edition of the Puces POP Fair in December at Église Saint-Denis, across from Laurier metro. 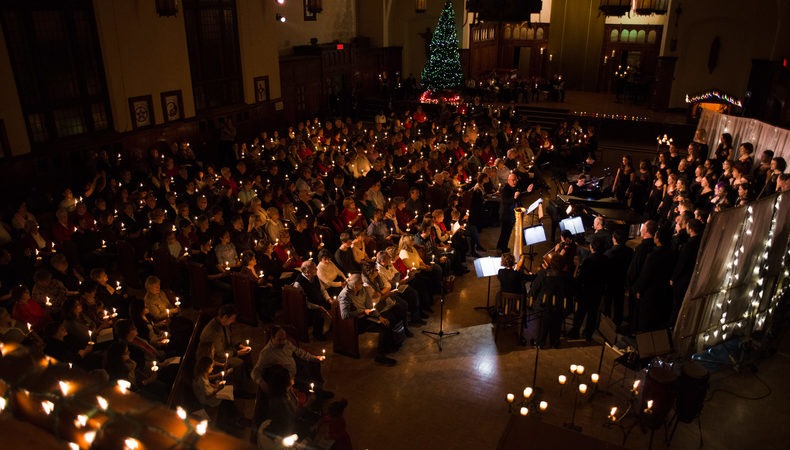 Built in 1933 on the Loyola College campus in the neighbourhood of Notre-Dame-de-Grâce, Concordia University's Loyola Chapel hosts community art and cultural events as well as music concerts like the Lyric Theatre Singers’ December holiday concert Candlelight Christmas. Further to the south in the neighbourhood of Ville-Émard, Théâtre Paradoxe transformed the Church of Our Lady of Perpetual Help into a multipurpose venue in 2014, retaining the stained glass windows and original woodwork while upgrading to host concerts and theatrical performances of all kinds. To the west, Le Salon 1861 has turned Little Burgundy's Saint Joseph's Church, originally built in 1861, into a collective space for events and concerts. And just across the road from the leafy forest paths of Mount Royal Park, the Mount Royal Cemetery is one of the oldest rural cemeteries in North America, with a founding date of 1852, and was the site of the first Crematorium in Canada – it's also host to an annual Shakespeare-in-the-Park performance by Repercussion Theatre.