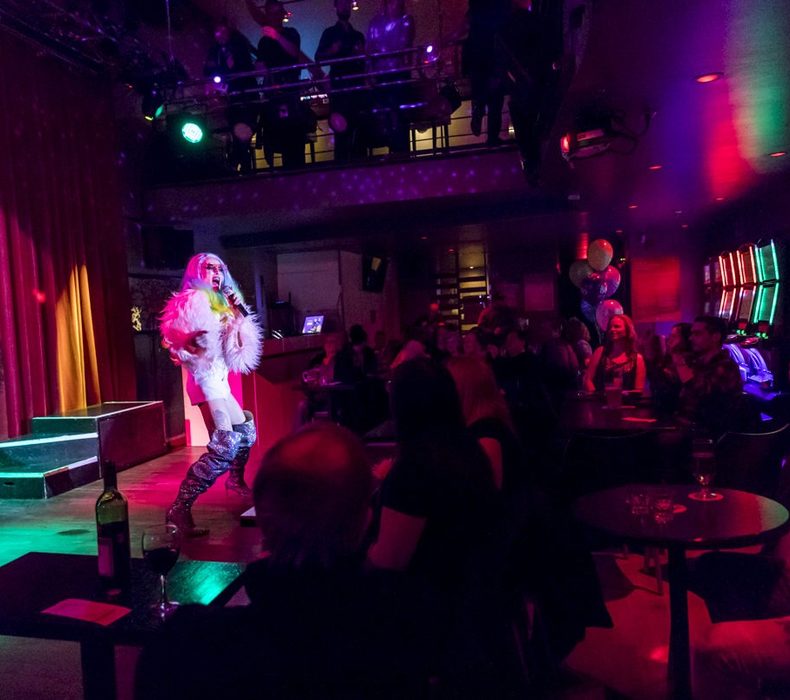 Bars in the Village and beyond

Montréal is home to one of the largest LGBTQ Villages in North America, but there are lots of great spots beyond the Village as well in a queer-friendly city that likes to let the good times roll.

Each year the lively kilometre-long summertime pedestrian mall on Saint-Catherine Street in the Village stretches east from Place Émilie-Gamelin near Berri-UQAM Métro station to Papineau Avenue. The pedestrian mall and surrounding area is filled with some 40 patios which are called “terrasses” by locals. And, of course, there are great spots in other ‘hoods as well.

Here is a selection of LGBTQ and queer-friendly establishments with rooftop bars, karaoke, drag shows and some of the best patios in the city.

Named for Montréal drag icon Mado Lamotte, Cabaret Mado is one of the busiest LGBTQ bars in the Village and a great place to spot visiting celebrities like Charlize Theron and Jean-Paul Gaultier. Local, national and international drag artists headline shows nightly. The street front patio is a great spot to catch up with friends.

Complexe Sky boasts three floors of entertainment with a popular summertime rooftop terrasse that also has an outdoor pool and jacuzzi. Enjoy a pitcher of ice-cold sangria on the street-level terrasse which is great for people-watching.

Trendy Bar Renard is popular with LGBTQ and straight young hipsters. The bar boasts a wide selection of wines, microbrewery beers and cocktails as well as a street front patio in the heart of the action. Inside, because of its floral décor, Renard’s unisex washroom has become an iconic selfie location.

Queer icon Lady Gaga and her entourage partied at District Vidéo Lounge when it opened in 2017. Montreal drag legend Jimmy Moore hosts a weekly drag show, and patrons can select music videos on the indoor screens or hang out on the very comfortable patio.

Montréal’s Black Eagle is called Aigle Noir. While it serves the leather and denim communities, it is also popular with bears and the athletic crowd. Happy hour specials and a cruisy summertime terrasse. A true Montréal classic.

Club Unity is one of the biggest nightclubs in the city, with two dance floors and legendary summertime rooftop terrasse with great views of the city.

Sports bar Le Normandie on Atateken Street is a terrific watering hole with cheap drinks and karaoke. A local institution since 1981, the tavern has two of the nicest and busiest summer patios in the Village.

Legendary Montréal female impersonator Michel Dorion’s classic Bar Le Cocktail is a terrific nightclub to see live shows by many of the best drag performers in the city – including Dorion – and Le Cocktail’s comfortable and popular patio draws a great mix of people.

A classic neighbourhood bar in the Village whose karaoke song list features more than 35,000 titles.

Popular with the bear and leather communities, Bar Le Stud on the eastern edge of the Village welcomes all types of men, and all types go. Open since 1995, their motto is, “Stud is a men’s bar, where men love men.” There is plenty to do inside the labyrinthine nightclub, which boasts two popular patios – one on Sainte-Catherine Street and the other on Papineau Avenue.

A wine bar by day and nightclub after dark, Bar Minéral on Atateken Street is an architectural delight and boasts a very comfortable sunshiny patio and excellent light food menu.

Montreal is famous for its gay male strip joints and none is bigger than Stock Bar in the Village. Ladies Night every Wednesday. 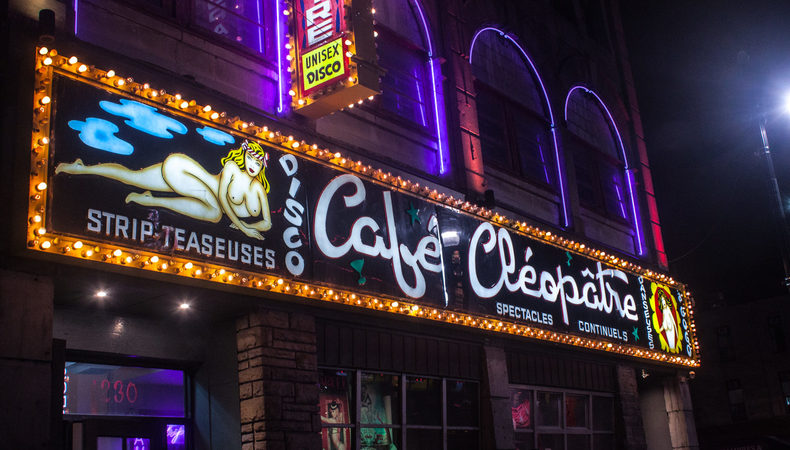 Outside the Village, Café Cleopatre is the last remnant of Montreal’s fabled red-light district. This building has been a showbar since the 1890s. There is a street-level female strip joint, but the historically queer-friendly upstairs cabaret still occasionally hosts LGBTQ and drag events.

Rosemont neighbourhood bar NDQ is a legendary LGBTQ hangout outside the Village. NDQ programs queer-themed events and parties, and is home to a miniature bowling alley!

Located just outside the Village, the bright and cheery Taverne Marion with its white-washed brick walls and large garage-style windows has become a trendy hangout for straights and queers alike.