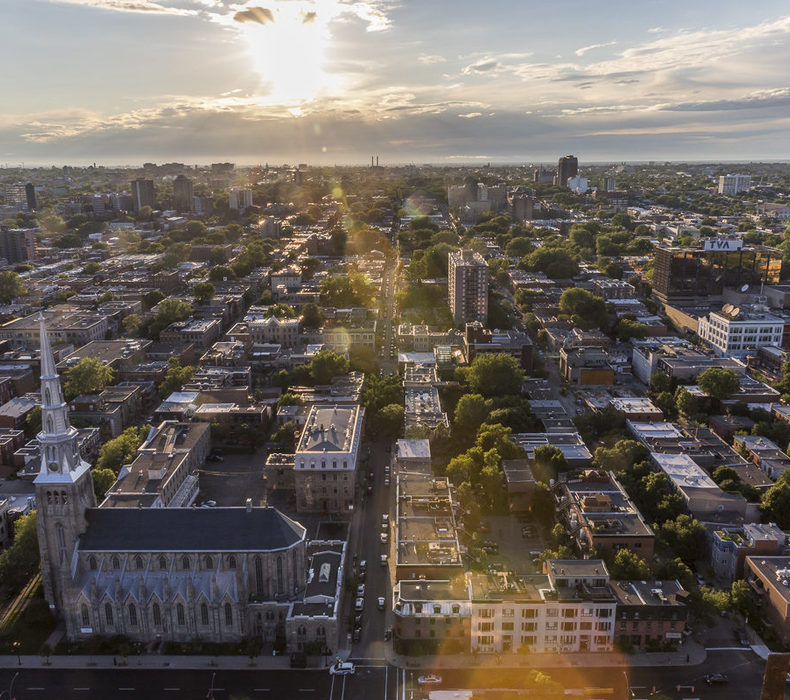 See Montréal from above

Montréal is a playground full of high moments, top tier dining and elevated entertainment experiences. Sometimes literally! Here are some of our favourite places to see Montréal from above. 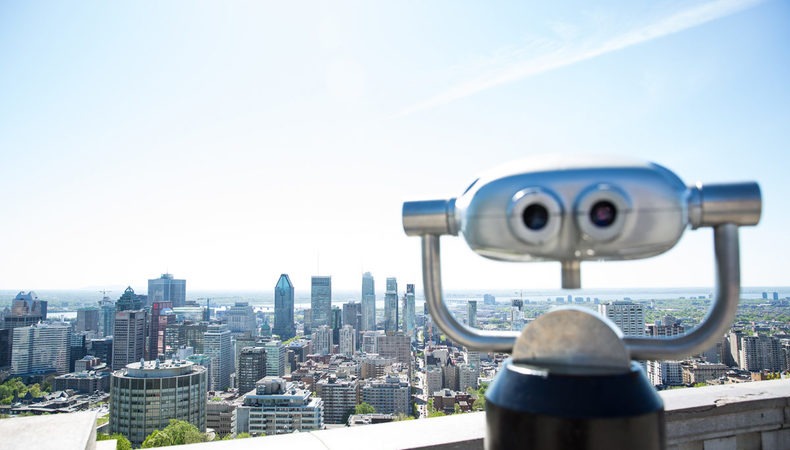 The Mountain has a slew of spots to get a bird’s eye view of the city. There’s the lookout at the Belvedere, where you can see an astounding view of downtown down to the St. Lawrence River as you sip a homemade lemonade from the café. There’s the Lookout on the northeast side, which will give you a look at the Plateau and eastward all the way past the Olympic Stadium. There are various lookouts you can reach when you walk to the very top, to the cross. The choices are endless, and the surrounds lushly green.

Many hotels in Montréal have amazing views, both from the top-level rooms and from rooftop bars. The AIR Terrace on the rooftop at The Renaissance hotel downtown is extra special for the ambiance, the drinks, the stainless steel plunge pool and the view of downtown and the river and its beautiful bridges. While it’s only open during summer months, there are lots of other rooftops spots nearby that are open year-round.

Building began in 1919 on this heritage tower right on the bank of the St. Lawrence River, originally to conceal the unsightly sheds that once lined the busy, bustling quays when Montréal’s commercial life centred around the Old Port. Today the Clock Tower marks the entrance to the port and stands as a memorial to sailors lost at sea. To those willing to climb the 45-metre-high tower, with 192 steps to the top, it’s a great spot for a stunning view of the waterways and city below.

Want some thrills with your view? Pitch yourself from the Conveyor Quay Tower with the experts at Décalade. You can either learn to scale the tower like Spiderman or Tom Cruise in Mission Impossible (did you know he does most of his own stunts?) over a three-hour session, or simply toss yourself off the 48-metre tower – with safety harnesses and careful expert guidance, of course – for a one-hour high-thrills special. Either way, you’ll feel the high!

The Olympic Stadium is one of Montréal’s most iconic landmarks, and the top of its tower is a fantastic place to get a sense of the city. At 165 metres high with a 45-degree angle, the Montréal Tower is the tallest inclined tower in the world – and an architectural masterpiece. Take the funicular to the top, and see the city sprawl around you; you’ll be able to spot other landmarks and attractions in all directions, like a living map. 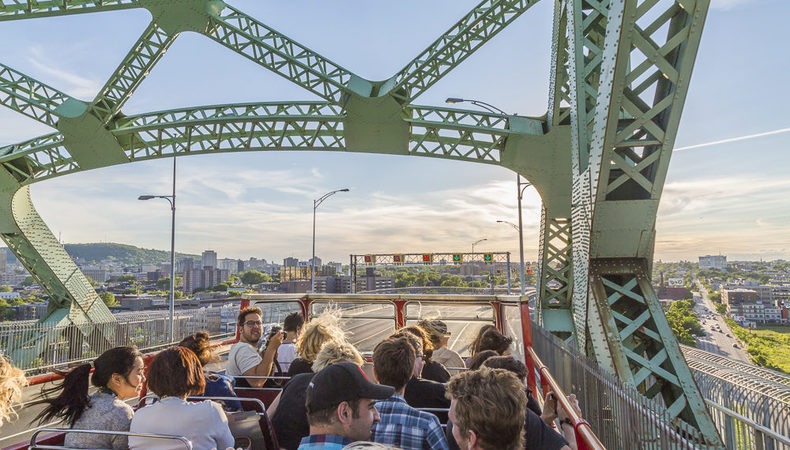 At over 100 metres high, the highest part of the Jacques-Cartier Bridge – which has pedestrian and bike access – is definitely a high place, and there’s no better spot to view the lights on fireworks nights. Plus, you’ll be standing among a real-life work of art: the bridge itself is illuminated every night in a kinetic work created by Moment Factory that reflects the city’s energy flow. 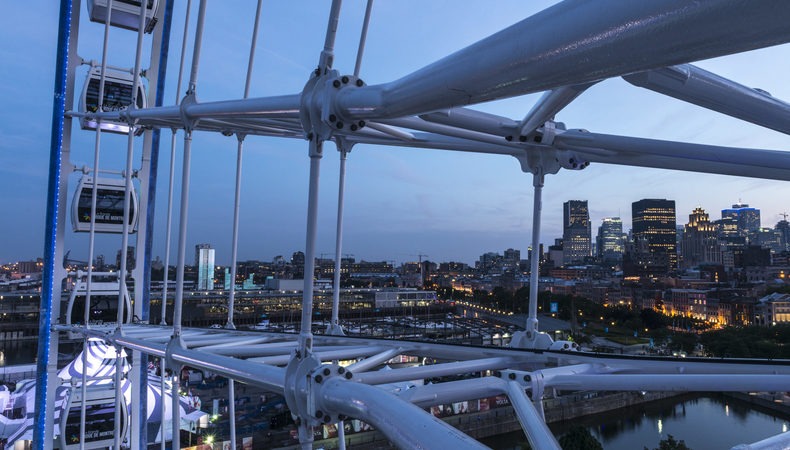 Take in the panoramic view in the cozy comfort of a weather-proof, four-season gondola aboard the largest, tallest Ferris wheel in Canada. Located right in Old Port, La Grande roue de Montréal’s 42 gondolas are equipped with ultra-clear tempered glass panes so you can see up to 28 kilometres away on a clear day. In the evening, colourful lights steal the show, creating a romantic and festive atmosphere.

With its highest spots hitting 40 metres, it’s no wonder this oldie-but-goodie ride at La Ronde – Montréal’s Six Flags amusement park – gives thrills and chills. If you have time to actually look over the screaming and flailing arms at certain spots on Le Monstre you’ll see the beautiful St. Lawrence River and islands spread out before you. All you’ve got to do is dare open your eyes! 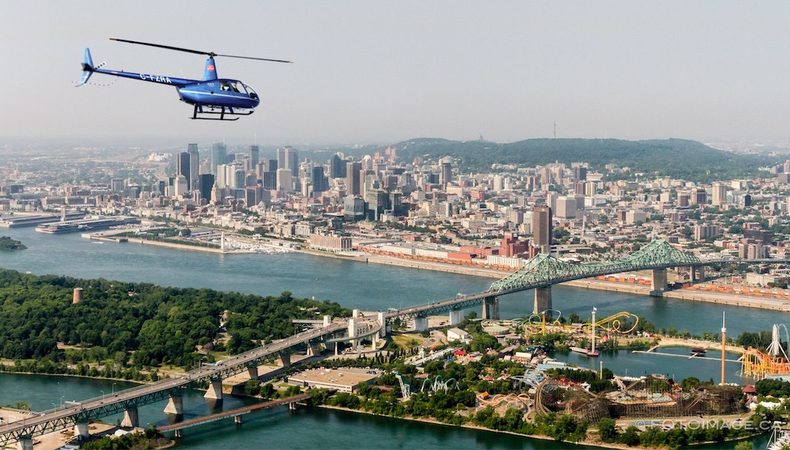 For a REAL high perspective, take a tour with Hélicraft – a unique way to see Montréal’s main attractions from above! Among the different panoramic tours available, ranging from 20 to 30 minutes, you can see views of the Olympic Stadium, downtown skyscrapers, Mount Royal, Saint Joseph's Oratory, the Old Port, the Jacques-Cartier Bridge and more. Or how about taking command? Fly the helicopter yourself during Hélicraft’s supervised pilot experience. With an experienced instructor by your side, you’ll soar 4,200 metres high above Montréal’s gorgeous skyline.