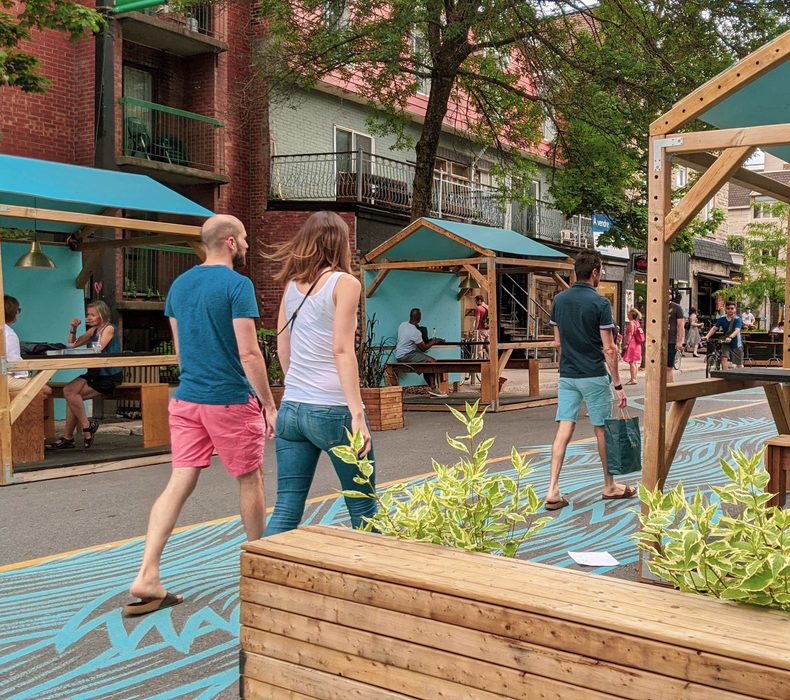 Mont-Royal Avenue gets flooded with creativity

Mont-Royal Avenue has always been a reflection of the character of the Plateau-Mont-Royal residents who live, work and play along its length: lively, creative, fun-loving, diverse and culturally curious. It has its own distinct, quintessentially Montréal rhythm which, new this summer, will have an extra added layer of vibrancy when the flow of the street is changed into that of a waterway. You read that correctly.

All walks of life… and art

Starting at the foot of its namesake, Mount Royal, in the west and with a striking view of the Olympic Stadium just beyond its end in the east, Mont-Royal Avenue is a heady and eclectic mix of clothing boutiques, neighbourhood pubs, cool cafés, record stores, international restos, funky brunch joints, book stores, fripperies, eye-popping cheese shops and specialty grocery stores with hidden treasures around every corner. And from now until the end of the summer, three kilometres of Mont-Royal Avenue will be converted into a pedestrians-only zone under the theme of “flowing water.”

Five collectives of experienced designers and artists have been tasked with implementing this theme: Castor et Pollux, EN TEMPS ET LIEU, Îlot 84, Le Comité and MU. Installations, street signage, pavement markings and other artwork are all part of this grand “urban laboratory” designed to inspire passersby and spark a bit of fun, all while respecting physical distancing guidelines. Here’s what to expect… 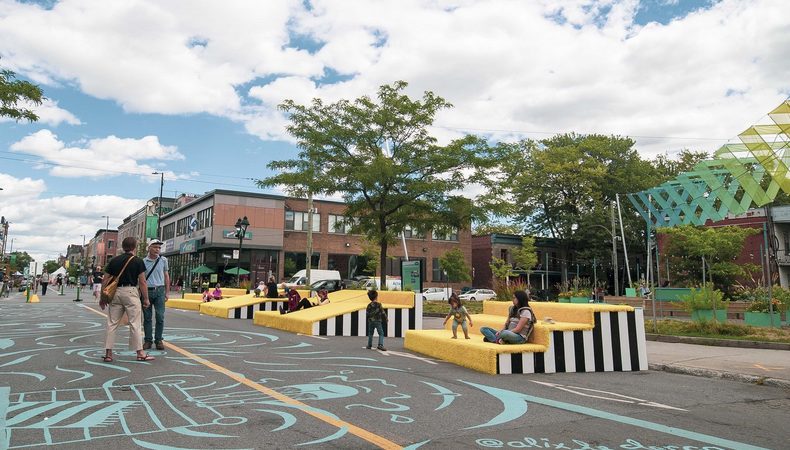 A company specializing in urban landscape and design, Castor et Pollux are in charge of the overall plan, the street’s pavement markings and urban signage. In keeping with the theme of flowing water, they have created a stream that flows from one end of the avenue to the other. It’s designed to enhance the pedestrian experience, lead to rest areas, act as a guide and encourage physical distancing while at the same time fostering social togetherness.

Combining visual art, architecture and design in ways that go beyond traditional modes of representation, EN TEMPS ET LIEU is a multidisciplinary design workshop that is presenting two original urban furniture projects. The first is Escale 52006, a multiplatform sitting area with plants that encourages people to take a break while keeping a safe distance. The second project, Place du Formidable Défilé des Marcheurs (or roughly translated, the Wonderful Walkers Parade Square), features bright yellow, diamond-shaped chairs from which to observe the “urban wildlife.”

A non-profit organization whose mission is to revitalize urban areas through various cultural and artistic projects, Îlot 84 contributed three installations along Mont-Royal Avenue. The installations will include meeting areas, a small stage, a pétanque court, play and relaxation areas, and more.

Le Comité is an urban design co-op behind the work of art Les pieds sur la table (Feet on the Table). A nod to Mont-Royal Avenue’s renowned culinary offerings, the artwork consists of three giant “experiential” tables — a cross between tables and a boardwalk — that play with restaurant conventions while inviting people to wander, discover and play. 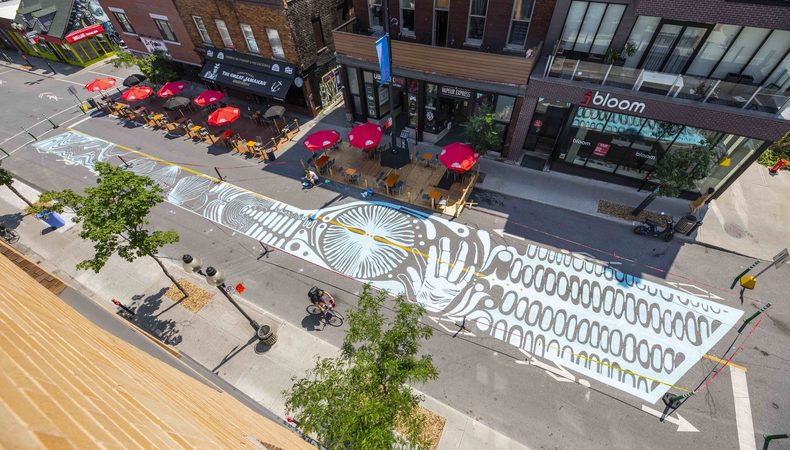 The MU organization aims to initiate folks into the world of mural art while transforming Montréal into a citywide, open-air gallery (and they’re well on their way: over the last 13 years, they’ve produced over 130 large-scale murals in 17 neighbourhoods). Their Mont-Royal Avenue project features one giant work of art painted on the ground. It’s comprised of 30 different tableaus painted by 30 artists combining a variety of styles around the theme of water, and will span 2.5 kilometres and 76,000 square feet (!) when finished.