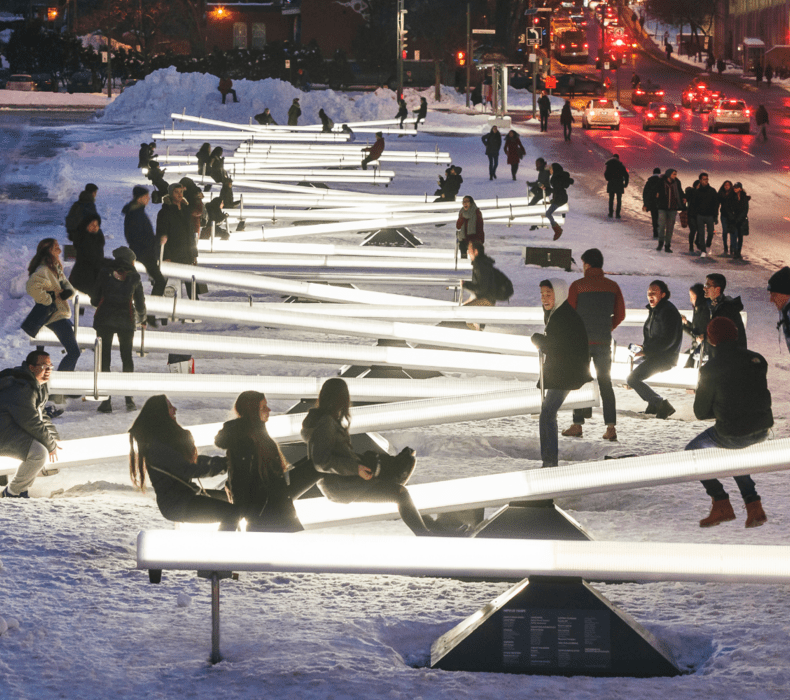 Play with light and sound outdoors at Luminothérapie

As winter kicks off in Montréal, the city fills the seasonal darkness with light. This year, the annual outdoor artwork of Luminothérapie envelops visitors inside interactive illuminated pods, entertains with music and animation, lights up building facades and  creates a festive glow in the heart of downtown.

NOTE: Government and public health authorities recently announced new sanitary measures to reduce the spread of COVID-19. We strongly recommend that you call or consult the websites of the businesses mentioned in this article before making plans.

The 12th edition of Luminothérapie  taps into Montréal’s affinity for technological innovation with a playfully artistic edge, turning downtown’s Quartier des spectacles into an interactive (and highly Instagrammable) art playground from December 2 to February 27.

Lighting up winter nights in increasingly inventive ways has earned Montréal a reputation as a city of lights – with a high-tech twist. This year’s Luminothérapie installations and projections revisit some favourite artworks – like the illuminated musical see-saws – alongside new projection art, five-minute dance parties, and more  throughout the many blocks of the Quartier des spectacles!

Lighting up the night

Outside Place des Arts, play like a kid again on Impulse, giant seesaws that glow and make sounds as you ride! Nearby, take a walk through a musical metal iceberg and wander through a field of thousands of brightly lit “wheat” stalks in gorgeous installation Entre les rangs.

Spend a meditative moment next to the giant whale of Echoes - a voice from uncharted waters, an interactive sound-and-light work that taps into the Earth’s wild ecosystems. Look up to building facades in Place des Festivals to see the wondrous and bright projection art of Nova, inspired by the motion of water. And if you’re outside Place des Arts or Saint-Laurent Metro Station, get ready to dance as the clock strikes 7 p.m. every evening with mini-event Cœur dansant! 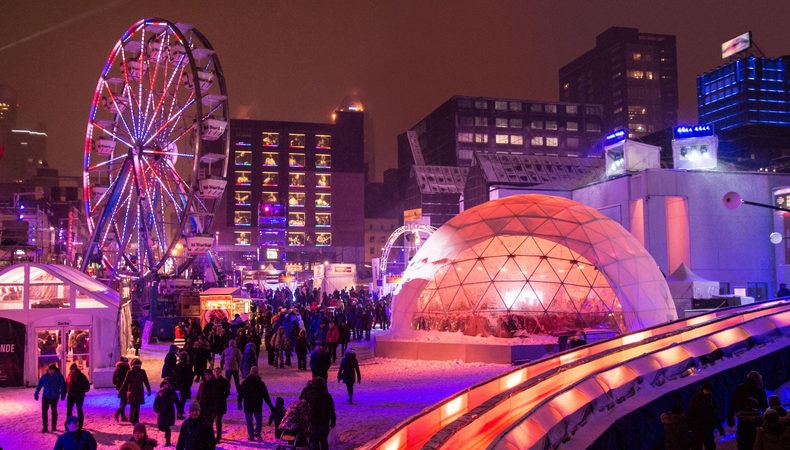 One of many winter holiday activities in Montréal – not to mention one of the free things to do this winter in Montréal – Luminothérapie turns the power on from noon until well after dark in Place des Festivals. Right next door, you'll find entertainment hub Place des Arts. and the Musée d'art contemporain de Montréal  Across Sainte-Catherine Street, check out the sparkling Complexe Desjardins, transformed into a magical Holiday Kingdom this season, with an illuminated fountain, visits with Santa and more. And stroll down Ste. Catherine Street all the way to the Village to see the sights at Noël dans le Parc in Place Émilie-Gamelin.