A guide to Montréal's parks and green spaces

A thriving metropolis with a heart of green, Montréal balances big-city comforts and culture with an abundance of sublime parkland. Walk up a tree-covered mountain in the middle of the city, picnic with locals by a fountain, read a book in a city square or snowshoe through wild nature parks – whatever the season, Montréal's green spaces are essential to city life.

Mount Royal Park: A naturally beautiful getaway steps away from downtown and the Plateau, “The Mountain” features not only a variety of wild flora and fauna but the same designer as New York's Central Park (Frederick Law Olmsted), a 103-foot-tall illuminated cross and a weekly Sunday gathering called the Tam-tams at the George-Étienne Cartier Monument. Drive or bus to Beaver Lake for a boat ride in summer or ice skating and tobogganing in winter, walk the steps up to the Mount Royal Chalet and the Kondiaronk Belvedere lookout for amazing views of the city, and discover even more on a guided walk or a snowshoe trek.

Parc La Fontaine: Spanning several city blocks between downtown and the Plateau's eastern edge, La Fontaine park is an leafy oasis and social gathering spot in summer, while in winter the park's pond, home to its namesake fountain, transforms into a popular skating rink. Close to restaurants and stores on Mont-Royal Avenue and Saint-Denis Street, the park makes for a relaxing rest-stop in a busy day. Have a coffee or a meal at the family-friendly Espace La Fontaine bistro and catch a performance on Théâtre de Verdure's outdoor stage.

Parc Jarry: Located between the Parc-Ex and Villeray neighbourhoods and not far from Little Italy, Jarry Park teems with people all summer, whether they're there to play soccer, watch the Rogers Cup tennis tournament, go swimming or host an open-air birthday party. Plenty of picnic tables and green space – plus the nearby Jean-Talon Market – makes the park a perfect picnic destination, while a large playground and wading pool entertain kids for hours. In winter, the pond turns into a skating rink and the grounds welcome cross-country skiers. It's also one of the parks hosting Repercussion Theatre's annual mid-summer Shakespeare performances.

Parc Maisonneuve: With 63 hectares of green space, including a public golf course, official bike paths and a skating rink, there's still plenty of space to stretch out and relax in Parc Maisonneuve in the Rosemont–La Petite-Patrie borough. It's also next door to the must-see Botanical Garden and fascinating Insectarium and just up the hill from the Olympic Stadium, Rio Tinto Alcan Planetarium and biodiverse Biodôme.

Parc Angrignon: At the end of the Montréal metro's green line, you'll find this 97-hectare park in the Sud-Ouest borough. A year-round destination for families and nature lovers of all ages, the park is replete with summer activities and in winter welcomes cross-country skiers. A pond and the historic Fort Angrignon trail add to the feeling of being much further from the city than you actually are.

Parc Jeanne-Mance: At the foot of Parc Mount-Royal alongside Parc Avenue, Parc Jeanne-Mance features a wading pool and a newly constructed playground for kids, ice rinks in winter, tennis courts, a football field, baseball diamonds and a beach volleyball court, with plenty of space left over for afternoon picnics and BBQs.

Parc Sir-Wilfrid-Laurier: Near the shops, restaurants, bakeries and cafés on Laurier Avenue East in the Plateau, Laurier Park truly defines a neighbourhood park in Montréal, with a diversity of people passing through every day, whether to read on a park bench, jog or go for a swim, and cultural activities such as film screenings throughout the summer months.

Parc Outremont: Close to Mile End and just off Bernard Avenue West in Outremont, this quiet park is a great place to test the difference between Fairmount Bagel Bakery or St-Viateur Bagel or simply sit back and read a book. Stop at nearby Parc Saint-Viateur too for a stroll around its pond.

Square Sir-George-Étienne-Cartier: If you're headed to one of the many popular restaurants, cafés or bars along Notre-Dame Street West in the neighbourhood of Saint-Henri, stop by this green space for a relaxing break by the fountain or go for a swim in the city pool. (Not to be confused with the also visit-worthy Sir George-Etienne Cartier National Historic Site in Old Montréal.)

Parc Notre-Dame-de Grâce: Among the many small parks in NDG, this one stands out as a neighbourhood gathering space and a cultural hub – check out NDG Arts Week at the end of August and cinema under the stars all summer – just off Sherbrooke Avenue, where you'll find a diversity of restaurants and cafés.

Promenade Bellerive: Drive, bus or take the downtown bike route east under the Jacques-Cartier Bridge and along Notre-Dame Street to reach this large neighbourhood park along the river, featuring playgrounds, picnic grounds and cultural activities – you can also catch a shuttle boat to Île Charron in Parc national des Îles-de-Boucherville. 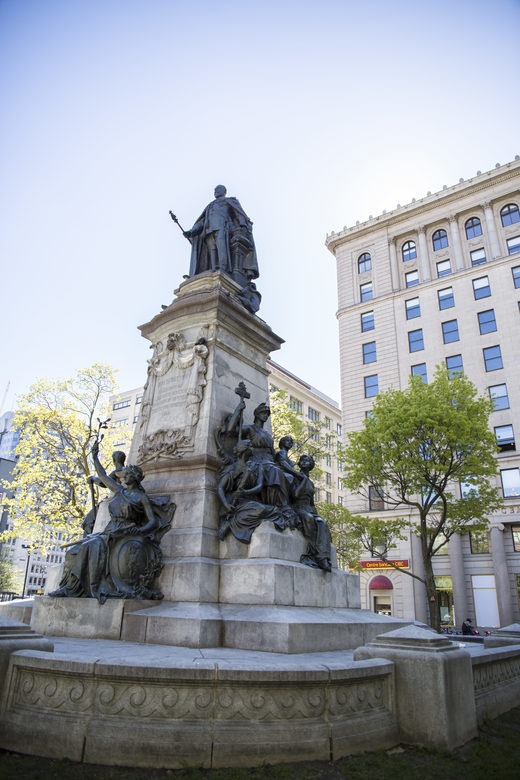 Place Émilie Gamelin: Right next to Berri-UQAM metro station in the Quartier des Spectacles, this grassy square turns into the Jardins Gamelin come spring, with an open-air bar and café, food trucks, urban gardens, live music and performances, activities for kids and more.

Phillips Square: Sit on the steps of the monument to King Edward VII at this square on shopping-centric Sainte-Catherine Street next to Birks flagship store and across from The Bay department store downtown, one of the many entrances to the Underground Pedestrian Network.

Square Saint-Louis: At the foot of restaurant-rich pedestrian corridor Prince Arthur Street, you'll find this Parisian-style square surrounded by quaint turn-of-the-century houses. It's also along shopping district Saint-Denis Street and up the hill from the youthful Latin Quarter.

Square Victoria: Take a break from meetings or sight-seeing in Old Montréal at this 19th-century square right above Square-Victoria-OACI metro station, outfitted with Art Nouveau signage, across from the World Trade Centre Montréal and the W Montréal hotel's Italian-inspired Tbsp. restaurant and intimate Bartizen.

Dorchester Square – Place du Canada: One of the most picturesque spots in downtown Montréal, this recently restored square was once known as Dominion Square – hence the name of the Dominion Square Tavern on its eastern edge next to the impressive Sun Life Building. Cross René-Lévesque Boulevard and you'll find the John A. Macdonald Monument and, across de la Cathédrale Street, the Mary Queen of the World Cathedral. Dorchester Square is also where you can hop on a double-decker bus city tour or take a day trip out to a nature park with La Navette Nature.

Place d'Armes: In the heart of Old Montréal, facing the exquisite Notre-Dame Basilica of Montréal on one side and the lavish architecture of the Bank of Montréal and museum on another, you'll often hear live music in this tree-lined square originally built at the end of the 17th century. 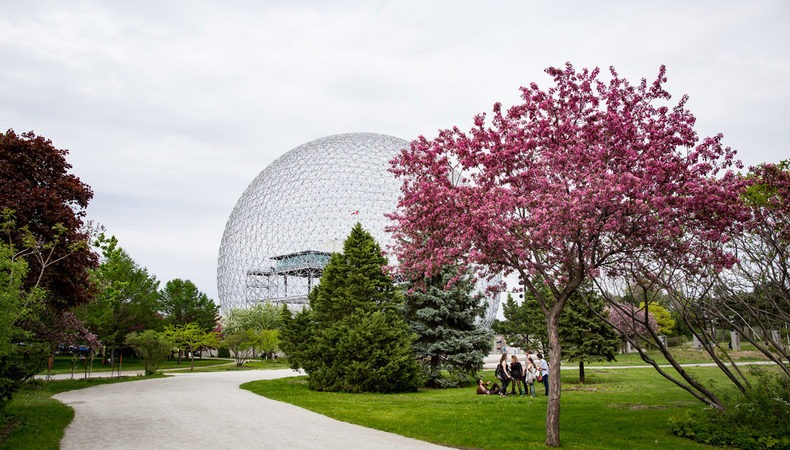 Parc Jean-Drapeau: Separated from the city by the St. Lawrence River but only one metro stop from downtown, Parc Jean-Drapeau combines nature's beauty with Montréal's penchant for dazzling entertainment. Developed for Expo '67, the park spans two islands, welcoming hikers, cyclists, swimmers, cross-country skiers and snowshoers while also hosting some of the city's biggest festivals, such as Osheaga and Fête des neiges de Montréal, and the Casino de Montréal, La Ronde amusement park, and the iconic Biosphère. Panoramic views of the river and downtown skyline add to the park's wonders.

Parc des Rapides: See the St. Lawrence River and the spectacular Lachine Rapids from a close vantage point in this Sud-Ouest borough park, featuring the St. Lawrence waterfront cycling path, a bird sanctuary and picnic grounds. While there, watch surfers, kayakers and white-water rafters take on the rapids – or try it yourself.

Parc-nature du Cap-Saint-Jacques: Forests and meadows, a sandy beach and an ecological farm open to visitors make Cap Saint-Jacques well worth the short drive from the city. Open year-round, the 288-hectare park also isn't far from the outdoor-indoor Ecomuseum Zoo, the Morgan Arboretum and Parc-nature de l'Anse-à-l'Orme, popular with windsurfers and boaters.

Parc-nature de l’Île-de-la-Visitation: On the shores of the Rivière des Prairies, this 34-hectare nature park once housed Canada’s first industrial site, but is now home to a variety of birds and aquatic wildlife, the historic Maison du Pressoir and mills, a bistro and several kilometres of walking, cycling and cross-country skiing trails.

Parc-nature du Bois-de-Liesse: A 159-hectare West-Island park on the shores of the Rivière des Prairies, this forest park is ideal for hiking and cycling or snowshoeing and cross-country skiing – two chalets and an interpretation centre provide a cozy retreat from the weather.

Parc-nature de la Pointe-aux-Prairies: On the eastern tip of the Island of Montreal, this 261-hectare park features interpretation trails through forests and marshes, numerous outdoor activities, bird watching and the historic Maison Bleau "Quebec-style house" built in the 1850s.

Frédérick-Back Park: A 192-hectare green space with a 5.5-kilometre bike path and activities throughout the year is just beyond the 40 highway and next door to La TOHU and Cirque du Soleil circus centres. Part of the Saint-Michel Environmental Complex, this newly redesigned park continues to expand its trails and forests in a massive environmental restoration project and one of the largest green spaces in Montréal.

Note: Due to current public health directives, some businesses and attractions may be temporarily closed or may have reduced hours or services, so we recommend that you call ahead or visit their websites for the most up-to-date information. For more details on the current situation in Montréal, click here.