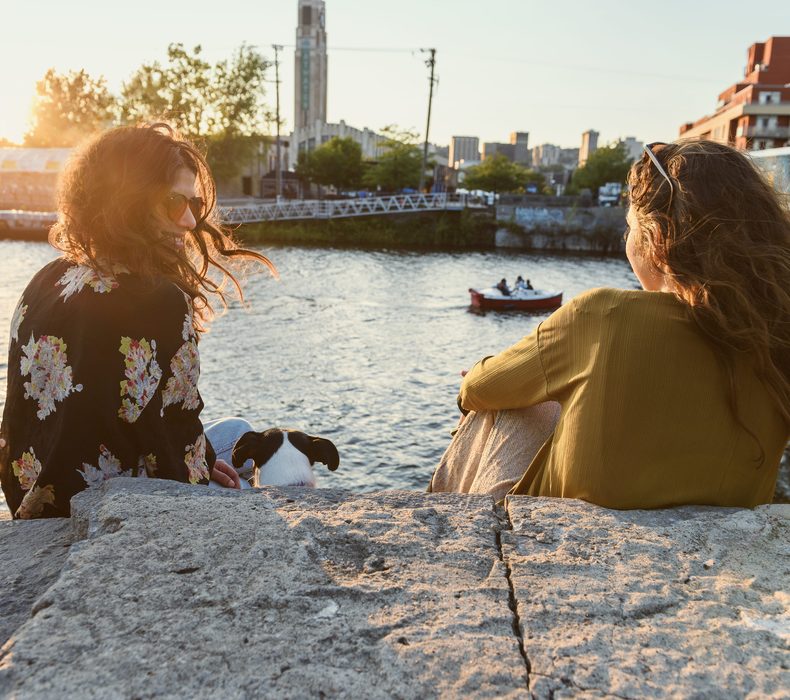 Free things to do this summer in Montréal

Make the most of Montréal's glorious sunny days and warm nights with all kinds of free things to do this summer. Explore Montréal's parks, outdoor spaces and markets, rediscover different neighbourhoods on foot and by bike, happen upon activities and performances, experience bold new art and more free things to do across the city and online. Expect fun and surprises downtown and in the Quartier des spectacles all summer with Le Coeur de l’Isle activities, plus Giant Chessboards and more in June on Sainte-Catherine Street.

Music and entertainment, along with great food and drink, make Jardins Gamelin a great downtown rest stop, just outside Berri-UQAM metro station in the The Village, where Sainte-Catherine Street transforms into a vibrant pedestrian-only zone. Check out other pedestrian-only avenues throughout the city too this summer, from Wellington St. in Verdun to Saint-Laurent Blvd. and Mont-Royal Ave.

Take yourself on a tour of the city’s murals and even see see seasonally apropos murals full of colourful flowers on the sides of buildings, in parks and every neighbourhood thanks to MURAL, LNDMRK, MU and expert Montréal mural artists and collectives. MURAL FESTIVAL returns with live painting and hybrid events from August 12 to 22. In the Quartiers des spectacles at night, see projection artwork illuminating the facades of the Grande Bibliothèque, UQAM's Pavillon President-Kennedy and the St-Laurent metro station. And at night in Old Montréal, use your smartphone to search out the historic projections of Montréal en Histoires Cité Mémoire. Whether you're visiting or a Montréaler, this summer is a great time to experience Montréal in a new light. Explore the history and beauty of Old Montréal, where pedestrianized streets and squares accommodate visitors and the area's popular terrasses are open again, along with the Marché des Éclusiers market. Stroll the Old Port of Montréal boardwalk to see the St-Lawrence River and more. Take a musical sound walk using the Portrait Sonore app, featuring modern architecture, public art, Expo 67 and more. Downtown near McGill University, walk through the McCord Museum's Urban Forest an outdoor art installation and quiet rest stop downtown.

While you're exploring, look out for Montréal’s food trucks, where you’ll find local meals and summer treats. Stop for take-out at one of your favourites or a new restaurant, or pick up locally-grown and made food at Jean Talon Market and other public markets. And cool off with the city’s best ice cream, iced coffee or an ice-cold locally brewed beer. Whether you’re visiting the Montréal Botanical Garden or not, Parc Maisonneuve next door is a beautiful place for a bike ride or a picnic. Not far from there, the esplanade of Olympic Park, while not too green, is the place to be for skateboarding at Vans Skatepark and DIY rock climbing on two giant granite blocks. Meanwhile, not far from downtown, the leafy forest paths and views of the city from Mount Royal Park never get old – go at sunset or sunrise for a truly stunning sight.

Bring a picnic and spend the afternoon at Parc La Fontaine and many other welcoming Montréal parks and green spaces. Explore the open spaces and spaceship-like domes of Frédéric-Back Park and head across the St. Lawrence River for the nature of Parc Jean-Drapeau. Ride your bike (or rent one) to explore different neighbourhoods, head further afield, and even hit high speeds on the Circuit Gilles-Villeneuve racetrack! Hop in the water to cool down at city pools and beaches, reopening for the season with health measures in place. For more outdoor adventures, spend time at Montréal's large nature parks.

Festivals online and in person

Laugh with some of the best comedians in Montreal and the world at Just For Laughs hybrid edition, featuring some free events, from July 26 to 31. Montréal Pride returns to celebrate from August 9 to 15, mixing online events with surprise performances. While the Eureka! Festival celebrates science in all its forms – families can take part in activities online starting in June.

Public art is abundant in Montréal and there's no time like this summer to see it. Wait until nightfall to watch the Living Connections light show on the Jacques-Cartier Bridge, go on your own self-guided tour of Montréal's hundreds of public art works throughout the city. And follow our guide to Montréal's most famous icons to see more of the city's major sights and architecture.

At the Montreal Museum of Fine Arts, free for ages 20 and under, see Riopelle: The Call of Northern Landscapes and Indigenous Cultures, collections exhibitions, Yann Pocreau: Impermanencies and Caroline Monnet: Ninga Mìnèh, and more while online join art workshops, virtual tours and webinars. The Musée d'art contemporain de Montréal, free to children 12 and under, features Des horizons d’attente, video works Fischli & Weiss, Isaac Julien and Simon Starling, Margaret Haines’ film The Stars Down to Earth to June 27 before closing for the summer – you can still immerse yourself in virtual exhibition Leonard Cohen: A Crack in Everything, an incredible recreation of the MAC’s 2017 monumental show.

Visit the PHI Foundation for Contemporary Art in Old Montréal to see Dora García’s durational performance Two Planets Have Been Colliding for Thousands of Years from July 7 to August 1 – just reserve your free tickets in advance. Watch for art in the Darling Foundry's Place Publique, transforming the street outside the gallery into an art space. Delve into Québec’s history, art and culture at a discount any time with the Passeport MTL – families can take advantage of the fact that kids 12 and under get in for free at many of the city’s major museums and galleries. And explore more of Montréal’s amazing art galleries in our Montréal guide to gallery hopping.