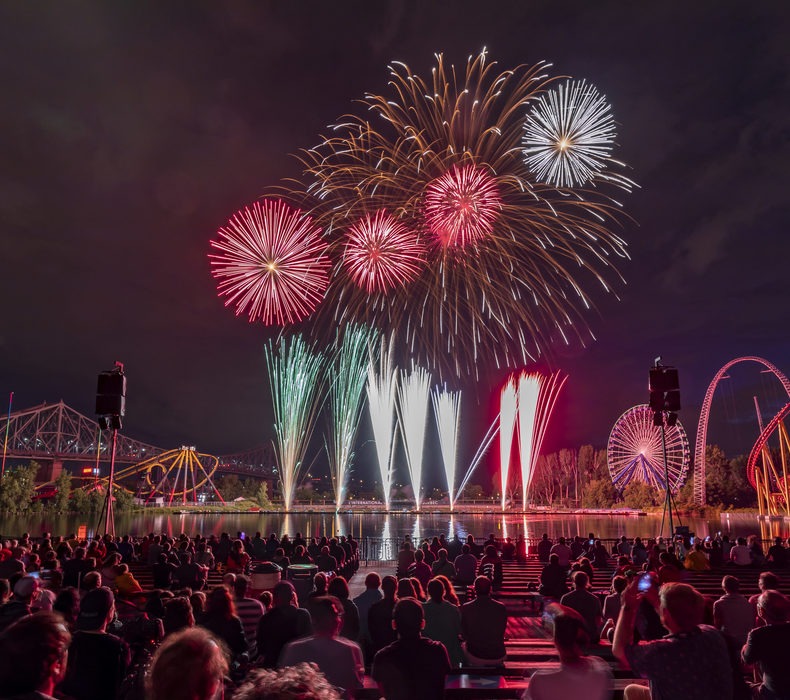 The best places to watch fireworks in Montréal

Every year Montréal hosts its fair share of awe-inspiring fireworks displays – and offers plenty of stellar places to watch them. Whether you're here during the city's month-long summer fireworks competition or for national holiday celebrations on Canada Day and Fête nationale du Québec à Montréal, get ready to be wowed by pyrotechnical brilliance!

Lighting the sky over Montréal since 1985, annual summer event L’International des Feux Loto-Québec is the biggest competition of its kind in the world. Starting in late June and running until late July, on Wednesday and Saturday nights, competing teams represent their countries with themed displays set to music. The action happens on Île Sainte-Hélène at La Ronde amusement park, but can be seen – and heard – from rooftop patios, bridges and other choice spots in the city.

Roller coasters, kids rides, fast food and fireworks? It's all at famed La Ronde amusement park, headquarters to L’International des Feux Loto-Québec. Whether you spend the day at the park or only come for the fireworks, La Ronde stands out as possibly the most intense fireworks viewing experience. Its waterfront grandstand seating directly faces the fireworks barges and you'll be treated to the accompanying music in stereo-surround sound. At such close range, you won't miss any of the show's incredible details and artistry. 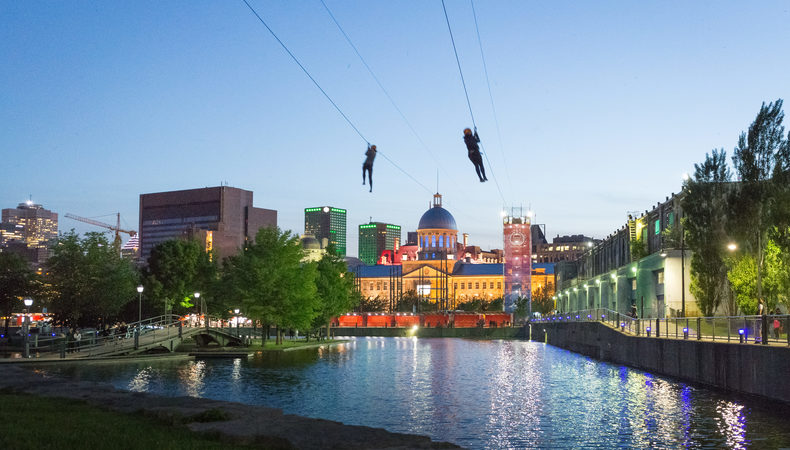 With unencumbered views of Île Sainte-Hélène and the St. Lawrence River, the Old Port of Montréal's Clock Tower Beach is a sandy riverside oasis and a perfectly chill spot to watch the fireworks. Free during the day and open to all ages, the Clock Tower Beach transforms on fireworks evenings into a more club-like atmosphere, with a $5 entry fee and an 18+ policy. Nearby, the MTL Zipline beckons adventurous visitors – why not go for a ride while fireworks explode in the sky above you? Now that's a serious Instagram moment. 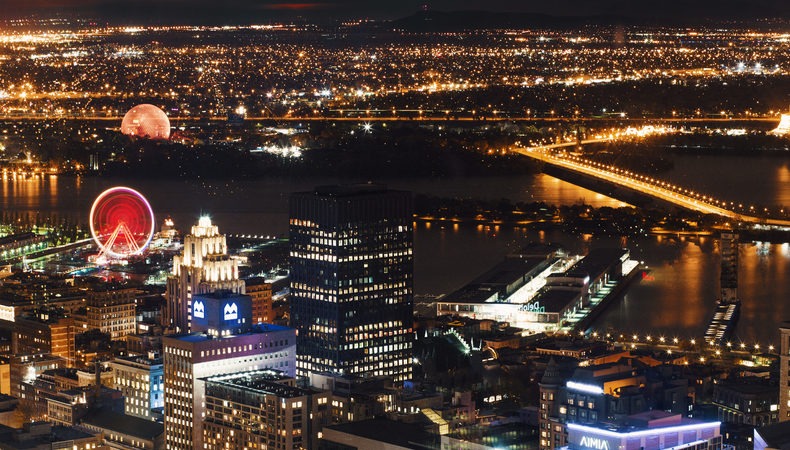 Watch the fireworks safely behind glass while looking out on the entire city from far above street level. At 185 metres above ground, the Observatoire Place Ville Marie situates you at eye level to the fireworks – and features cocktails and restaurant Les Enfants Terribles too. At 60 metres tall (that's 20 storeys), La Grande Roue de Montréal observation wheel in the Old Port stays open until 11 p.m. for fireworks viewing from its comfortable, climate-controlled gondolas. Not quite 360º, the view from the Mount Royal Park lookout is truly iconic and one to behold during the fireworks and any time of the day: look out on downtown and well beyond for a panoramic perspective on Montréal.

A bridge with a view

If you're up for a stroll, watch the show from the Jacques-Cartier Bridge, which closes to car traffic for the fireworks. Rub shoulders with locals who've tuned their phones and radios to the fireworks competition's radio station – and bring a jacket or sweater for the windy elevation. The bridge turns off its own Moment Factory-creating lighting display to let the pyrotechnics take centre stage. Meanwhile, near the Jacques-Cartier Bridge, ephemeral space Village au Pied-du-Courant throws its own fireworks-watching party. And if you're biking to Parc Jean-Drapeau, try the slightly less populated Concorde Bridge on the park's west side. 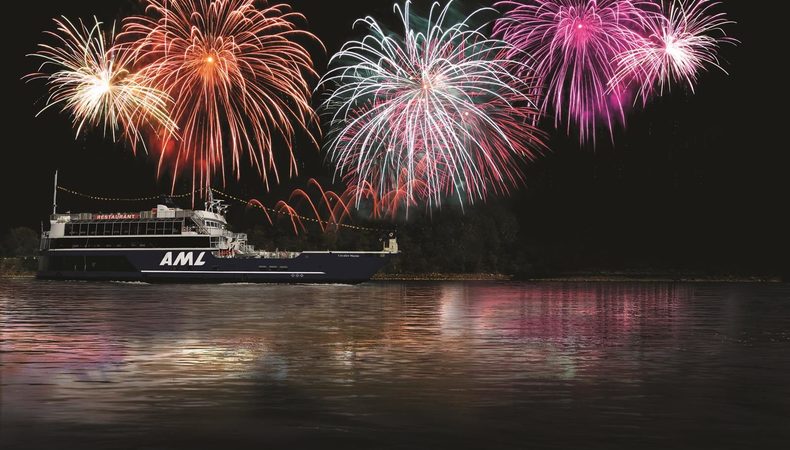 Fire on the water

For something a little different, watch the fireworks from the water! Take an evening boat ride on the St. Lawrence River with Croisières AML, offering several different and elaborate dinner-and-fireworks packages, or with Bateau-Mouche, where on fireworks nights you can choose between a four-course dinner service or a six-course meal on the upper deck. Enjoy your meal and then enjoy the fireworks as they reflect off the river. 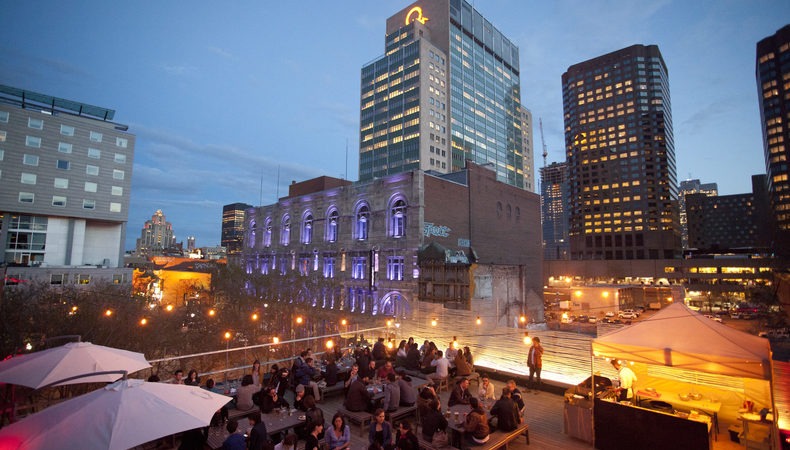 Rooftop explosions in the sky

Montréal is a city that embraces summertime completely, so it's no surprise that rooftop patios are plentiful. You'll be able to see the fireworks from many of them too, including the ever-popular Terrasse sur l’Auberge, overlooking the historic Old Port and the St. Lawrence River, at the Auberge du Vieux-Port hotel. Also in Old Montréal, try the lovely Terrasse William Gray at Hôtel William Gray, Terrasses Bonsecours, Terrasse Place d’Armes and Terrasse Nelligan. Downtown, find a cozy spot at the SAT's Foodlab on Saint-Laurent Boulevard, at rooftop bars at the Renaissance Montreal Downtown or Hôtel Bonaventure Montréal.

On the lively patios in the Village fireworks mark the start of the night: watch the show in the sky and then watch drag queens, do karaoke and go dancing until morning. Complexe Sky, one of the area's favourite locales, boasts three floors and a cabana-like rooftop terrace with a clear view of the fireworks – it's open and serving up cocktails until 3 a.m. Nearby, check out Unity Club's rooftop patio, with free admission and drink specials for the fireworks plus DJs and more into the night.