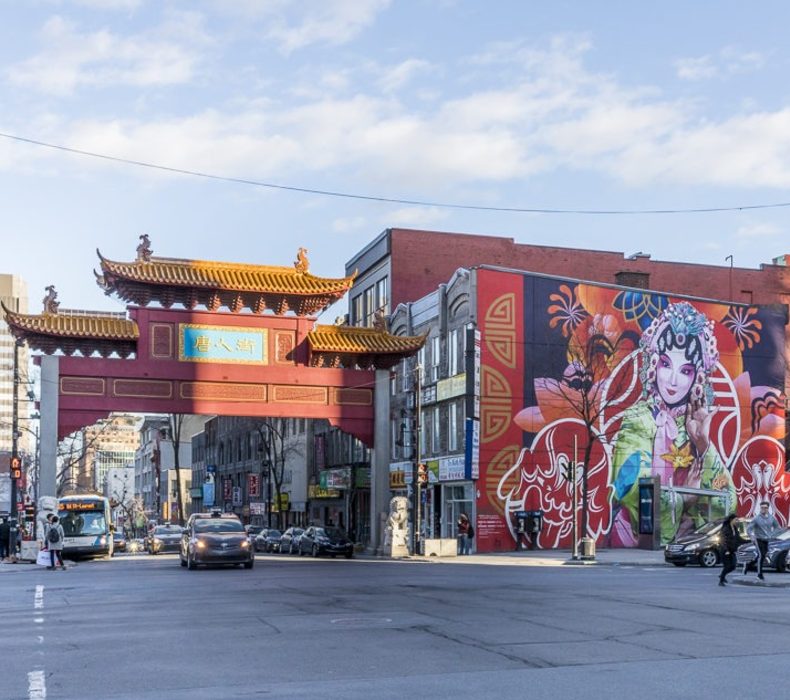 When visiting any city, guidebooks and locals will give you the rundown of what kind of activities to do, which hip and happening restaurants to dine, and what attractions to see. Regardless of which city you’re in, the most common neighbourhood that you’ll find yourself exploring is Chinatown. Montréal’s Chinatown was recently designated as the city’s first historical site (Quebec's highest level of heritage protection) by the Québec government. With business and buildings that date back all the way to 1826, here’s everything you need to know about this colourful neighbourhood.

Montréal’s Chinatown or Le quartier chinois is situated in the Ville-Marie borough. Chinatown occupies roughly one square block – Saint Dominique Street to the East, René Lévesque Boulevard to the North, Viger Street to the south and Jeanne-Mance Street to the West – four corners of which are marked by large ornate Paifang Gates (the most of any Chinatown in Canada.)

The bustling part of town was established in the early 1890s. With several Chinese stores set up on de le Gauchetière street peppered with Chinese laundries in the area, a Montréal Chinatown slowly started to emerge. 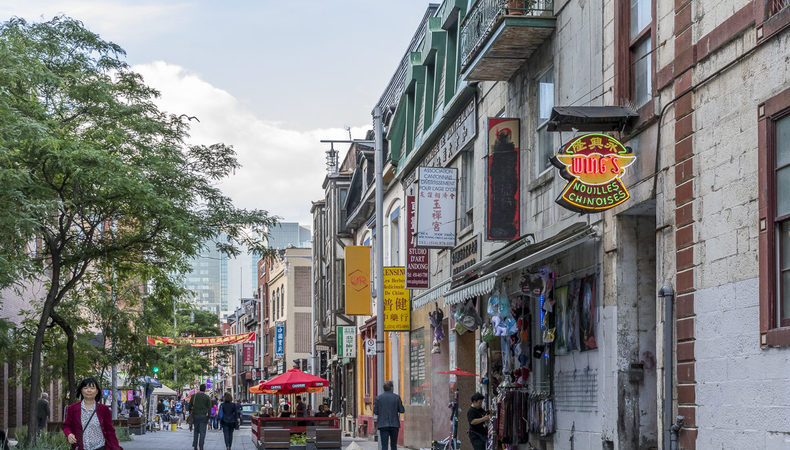 Throughout the years, Montréal’s Chinatown has survived expropriation and redevelopment.

The first initiative to revive the area was the installation of a pedestrian mall on de la Gauchetière street in the 1980s. Followed by the Chinese Catholic Community Centre, low-rent housing complexes with reserved floors for seniors, and low-income families, and the construction of the first all Chinese hospital in Canada – The Montreal Chinese Hospital in 1999. 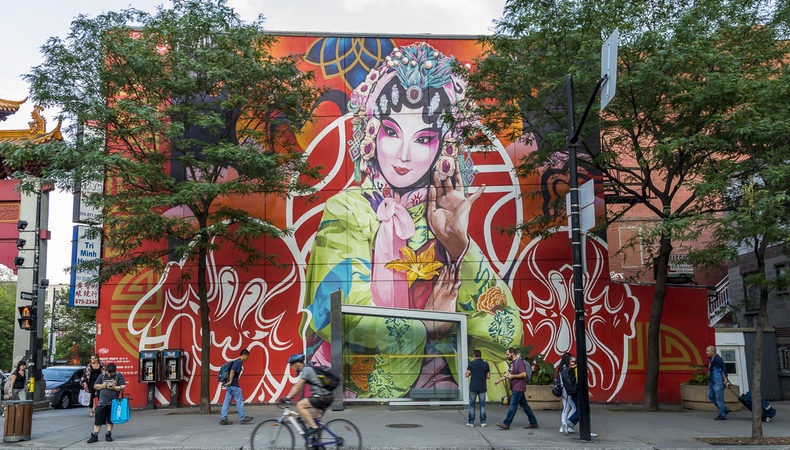 An area steeped in history, Chinatown has an abundance of historical sights to see.

Located at the corner of de la Gauchetière and Coté streets, The Wings building may be the oldest building in Chinatown. Built in 1826 by James O'Donnel, the architect of Notre Dame Basilica in Old Montreal, the Wings Building has been a military school, a paper boxfactory, and warehouse. Wing Hing Lung (“Wings” for short) is known for their fresh noodles and were the first manufacturer to make bilingual fortune cookies! 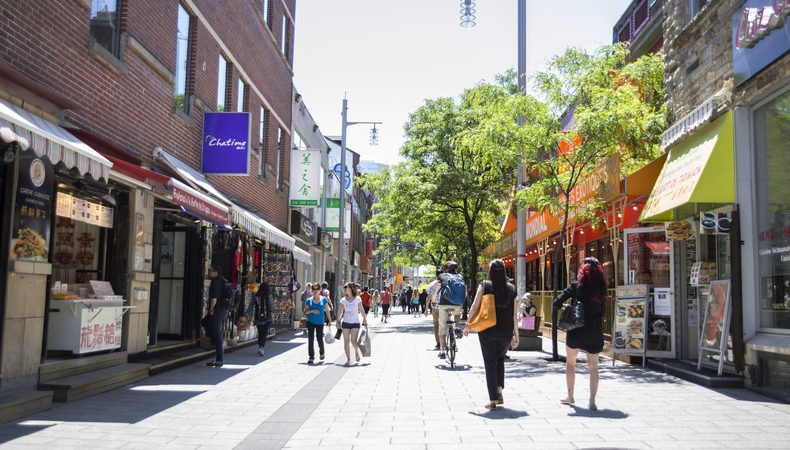 Situated in the heart of Chinatown at the corner of Clark and de la Gauchetière, this public square is named after the ideological father of modern China. Constructed by eight commissioned craftsmen from Shanghai, this park was created using traditional methods and materials. The north wall features a large grey slate carving and to the east a traditional decorative Chinese structure featuring exposed wood beams, joists and lintels that houses a souvenir shop.

“Benevolent Associations” or Tongs (which translates to “hall” or “gathering place”) were founded where members of the same families would congregate to provide support and counseling to newly landed Chinese immigrants. Montréal’s Lee Family Association (90 de la Gauchetière West) as well as Wong Wun Sun Association (75 de la Gauchetière West) are among the oldest in the country. They invite visitors to admire artifacts and photos on display from over the years – some are over 100 years old!

This pedestrian-only strip of de le Gauchetière sees street festivals during the Mid-Autumn Moon Festival and storefronts extending into the street in the summer, selling sweet treats and souvenirs.

What started off as small grocery stores, diners and restaurants, over the years, business in Chinatown reflect the multi-cultural Asian ethnicities that make up this vibrant neighbourhood. Businesses of Hong Kong Chinese, Mainland Chinese, Chinese refugees from South-East Asia are all represented in Chinatown.

Behind the souvenir stands and trinket shops are business that local Asian-Montrealers patron to source specialty imported items, such as Asian Pharmacies (herbal teas and oitments anyone?) or dine at some of the most authentic Chinese and other Asian restaurants the city has to offer.

Literally translated to “touch the heart”, these small delicate plates of food that often consist of dumplings, steamed sweet or savory buns and stir fry are a weekend brunch favorite. Head to Restaurant Kim Fung or Restaurant Ruby Rouge for all your dim sum favorites. 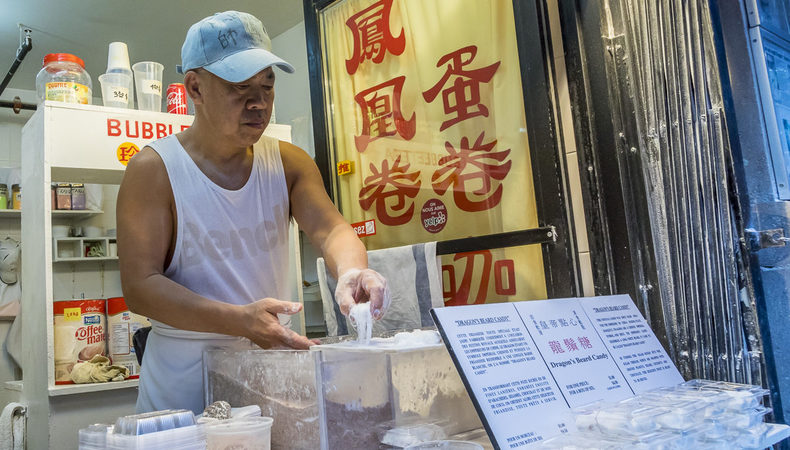 Tantalize your taste buds at Restaurant Kanbai, where fiery Szechuan cuisine will leave you wanting more. If you’re down for a quick show with your meal, visit the noodle pullers at Nouilles de Lan Zhou or NUDO, where the loud claps of dough being slapped to form fresh noodles welcome you as you walk through the door.

Visit some of the city’s most authentic “cha chan tengs”. Literally translated as “tea restaurant”, these Hong Kong style diners serve snacks, small meals and coffee- or tea-based drinks. Dobe & Andy and Restaurant Ethan are your best bets. Enjoy succulent roasted pork and duck noodles, classic macaroni with ham soup and deep-fried “French toast” and wash it all down with a cold and creamy sweetened milk-tea.

A trip to any Chinatown would not be complete without devouring some Chinese pastries.  Head over to Pâtisserie Harmonie and build yourself a box of baked goods, sweet buns with red bean paste or creamy custard egg tarts.  Don’t forget to visit the Dragon Beard Candy stall for this traditional confectionary. Made to order, the candy master pulls sugar taffy over and over to produce thousands of strands of “dragon’s beard” and wraps it all up over a peanut and sesame filling.

If it’s a visit to take in the history or fill your belly, everyone is welcome in Chinatown!