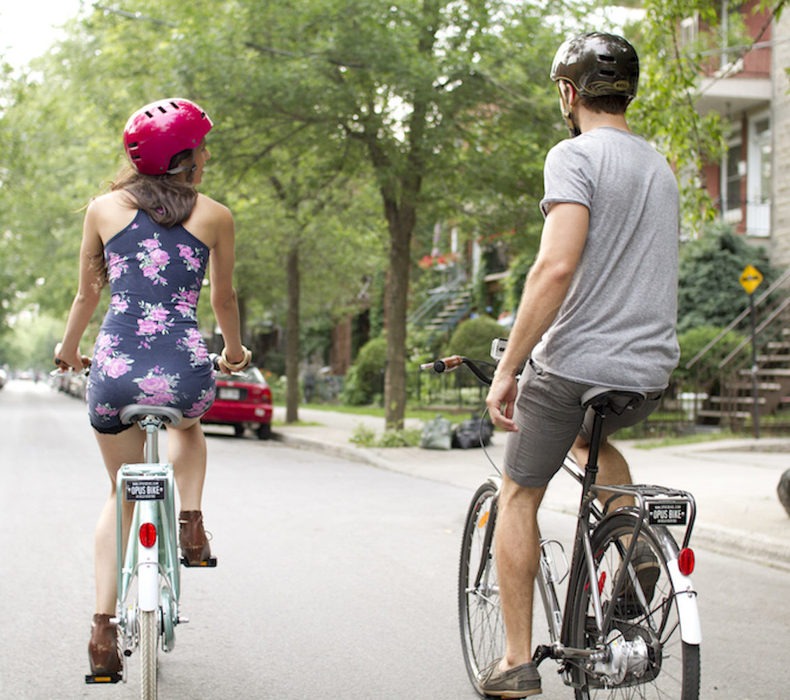 You can see it on the streets: Montréal is a biking city. From rushing students cycling to and from to locals making their way around town ontheir favourite bicycle, Montréal loves getting around on two wheels – and we’re even ranked one of the top biking cities in the world by the Copenhagen Index. 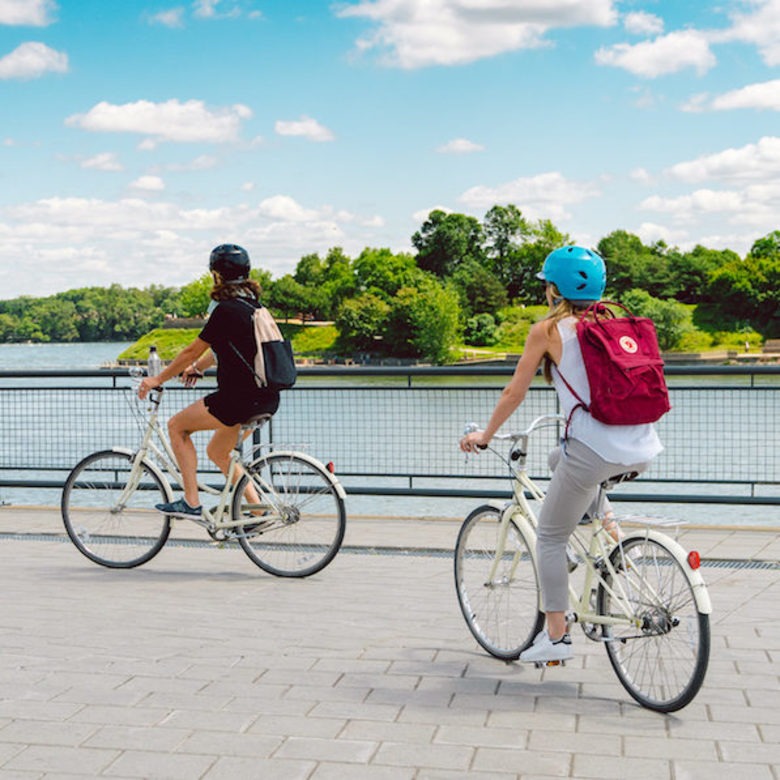 In reaction to COVID-19, Montréal has also added an additional 327 km of bike-friendly zones, bringing the city’s total of bike paths to 972 km, linking up five of the city’s biggest park areas – Mount Royal, Parc Maisonneuve, Parc Jarry, Frédéric-Back Park and Île-de-la-Visitation. We’ve chosen three local favourite “must-rides” to get you on your way, and better yet, you’ll catch a glimpse of another side of the city’s neighbourhoods that most tourists don’t experience on foot.

These rides aren’t particularly challenging, but they do range in distance from 15 km to 40 km each way. We’ve selected the heart of downtown at Place Ville Marie as the starting point for these distance measurements, but actual distances will change based on the location of where you’re staying. Make sure to bring some essentials – sunscreen, water, comfortable clothing and a helmet, which are available at the rental shops below.

As of summer 2019, bright blue Electric BIXI were added to the fleet, zipping riders around the city at speeds of up to 32 km/h. Spot Electric BIXIs on the app (look for stations marked with a small lightning bolt) and add on a small extra fee of $1 per sign-out. It’s also necessary to wear a helmet and follow the Highway Safety Code while riding, but it’s a fun – and fast – way to get around. (Do take a look at BIXI’s fees and rental periods on its website, as well as planning when and where to drop off your BIXI if taking longer rides. In some cases, you’ll need to keep the bike with you). 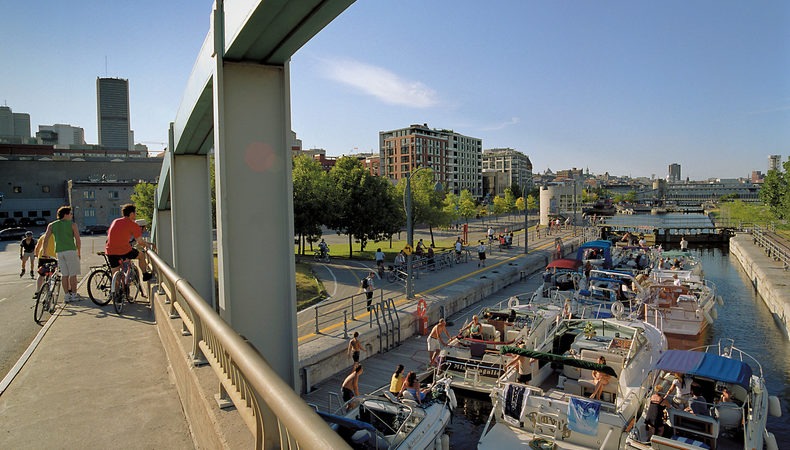 A local gem, the bike paths alongside the steady flow of the Lachine Canal passes gently through the Quartiers du Canal district, a union of the up-and-coming Griffintown, Saint-Henri and Little Burgundy neighbourhoods. Not only does the Canal pass by some of Montréal’s hippest spots and trendsetting shopping, the path has long been a place of respite and relaxation for Montréalers.

Make your way onto the canal on the outskirts of the Old Port of Montréal, and cycle to the Atwater Market – take a break en route for photos of the water – whose historic high tower is a symbol of this part of the city. Once you’ve stocked up on all the snacks you’ll need for the rest of the ride, it’s onwards to Lachine and along what’s considered one of the world’s most beautiful urban biking circuits.

The joke goes that the founders of the canal thought their hard work would take them all the way to China. Thus, the town of Lachine (La Chine being China in French) received it’s cheeky punch-line of a name. But the stately vistas and waterfront architecture of the town make for a taste of old world charm unique in North America.

Perfect for picnics amongst the sculptures, the Musée plein air de Lachine in Parc René-Lévesque is spread across a finger of land that stretches out into the St. Lawrence River on both sides. Great for a food break or rest, it’s the ideal finish line.

Head back for a well-deserved hearty meal and beverage at The Burgundy Lion on bustling Notre-Dame Street West in Little Burgundy and check one of Montréal’s most beloved bike routes off the bucket list. 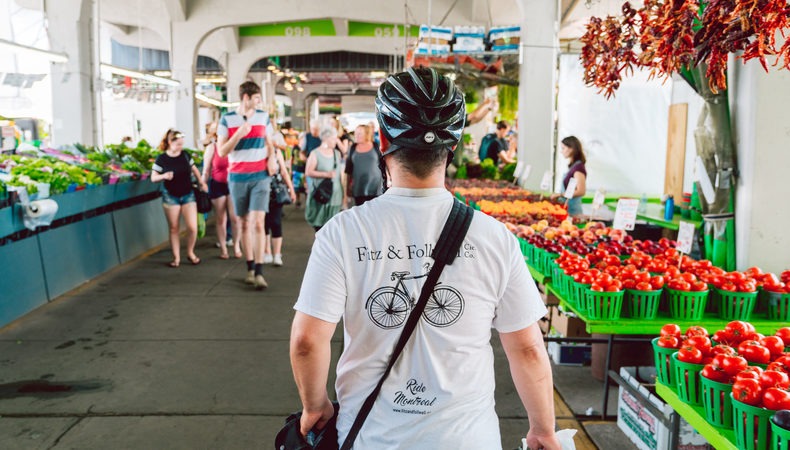 Basically a direct line from the city centre to the northern edge of Montréal island, biking to L’Île-de-la-Visitation gives a rare insight into how Montréalers really live, passing through Le Plateau-Mont-Royal, Little Italy and La Petite-Patrie, hipster Villeray and along Gouin Boulevard West on the banks of the Prairies River.

From downtown, make your way to La Fontaine Park, and cycle north along the park’s western edge. For a complete overview of Montréal’s biking system, pick up a map of the city and surrounding areas at La Maison des cyclistes at the northwestern tip of the park and chat up some local bike enthusiasts more than willing to make suggestions. Most streets through the Plateau are quiet and equipped with bike lanes, so explore to your heart’s content and cycle past some of the city’s most characteristic stairwells and postcard-pretty homes.

Once you hit Laurier Park, take the underpasses of either Christophe-Colomb Avenue or Saint-Hubert Street and continue into Little Italy and La Petite-Patrie, where no trip is complete without a visit to the Jean-Talon Market. Those in need of a caffeine-injection won’t want to miss an espresso standing amongst Italian locals at the counter of Caffè Italia.

Refuelled and recharged, continue north through Villeray, one of the city’s newest cooler districts, home to young artists and artisans. Using the biking lanes of Christophe-Colomb Avenue, use your pedal power until you reach the Prairies River. Swing right and both the Parc-nature de l'Île-de-la-Visitation and the Île-de-la-Visitation itself await.

Taking its name from the parish of the Visitation of the Blessed Virgin-Mary founded in 1736, Montréalers have been visiting this peaceful slice of heaven for hundreds of years. The buildings of the historic Sault-au-Récollet district here were proclaimed a historic site, and a wander past them and the ruins on the island is like stepping back in time. The calm flow of the river is well-suited for a lazy break in the grass – and the myriad paths and hills here are popular with cross-country skiers and toboggan riders in the winter months.

Ready to head back? Treat yourself with a meal at the Plateau’s famous Au Pied de Cochon, a just reward for an afternoon of biking. 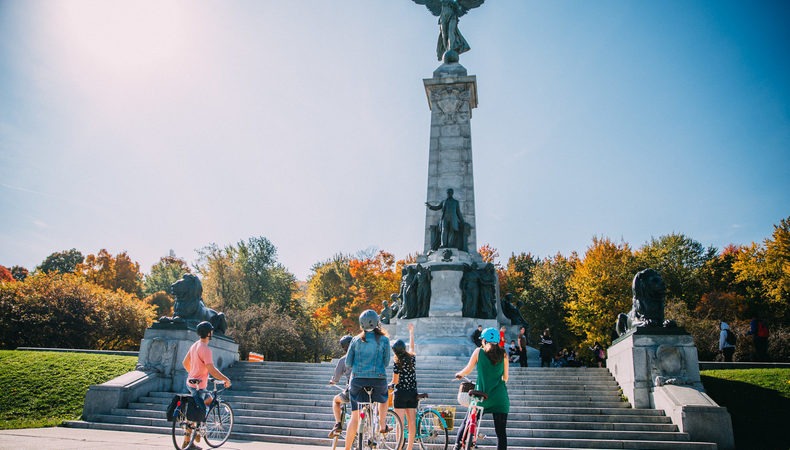 Want to impress the folks back home? This circuit not only takes you through several intriguing outer Montréal arrondissements, but ends on a sandy beach with prime swimming and shady spots to rest the day away.

Starting from downtown, pass through the McGill University campus – we’re not the only ones who think it looks a bit like Hogwarts – and then up bustling Parc Avenue with Mont-Royal on your left and Jeanne-Mance Park on the right, passing the Monument to Sir George-Étienne Cartier where, every Sunday, hundreds gather for the beat-driven Tam-tams, a Montréal tradition of drumming and dancing.

Join the slow-moving traffic on de la Côte-Sainte-Catherine Way as it winds through the Outremont neighbourhood. Some of the city’s most beautiful homes, buildings and parks are nestled in these streets, and those in need of a quick rest should head to the beautiful Outremont Park. Fill up with classic Québec bistro fare at the classic Restaurant Leméac, a short detour a couple of blocks down Laurier Avenue.

With the hillside towers of the Université de Montréal in view, turn right up Dunlop Avenue and head north, with a slight zig-zag left on Ducharme Avenue, right on de Vimy Avenue, left on Barclay Avenue, and right again on Wilderton Avenue. Proceed across Jean-Talon Street West and right into the Town of Mount Royal, a self-proclaimed garden city in the heart of Montréal that lives up to the hype. Take a breath at the Connaught Park Rose Garden and see it for yourself. 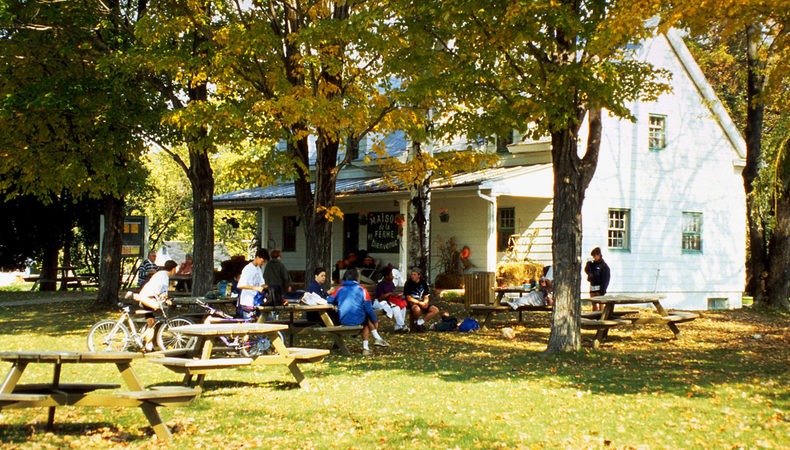 Back on-route, pass through the Bois-Franc and past Saraguay suburbs, and take Gouin Boulevard West through leafy Roxboro on the banks of the Prairies River. The Île de Roxboro makes for another quick rest-stop amongst the trees and continuing west on either Gouin or de Pierrefonds Boulevards, you’ll pass through what locals refer to as the West Island.

Enter Parc-nature du Cap-Saint-Jacques, surrounded on three sides by water, and navigate to the western-most side where the beach looking out on Lac des Deux Montagnes awaits!

Rest up and feel the sand between your toes, because now you’ve got options. It’s easy to head back the way you came, but you’ll see even more by continuing around the western-most edge of the Island of Montréal through green Senneville, the beautiful small town of Sainte-Anne-de-Bellevue, and back towards downtown on Montréal’s southern banks on the St. Lawrence River. Passing Dorval Island to your right, you’ll soon arrive at the town of Lachine and head straight down the Lachine Canal and back to your accommodation with a major urban bike ride under your belt.

And best of all? This is just the tip of the iceberg: there’s so much more to discover and experience on a bike in Montréal. 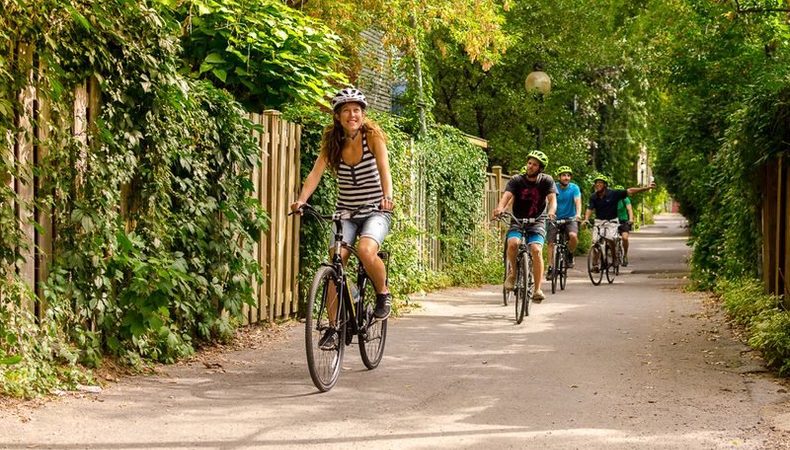 Where to get a bike in Montréal

First thing first: you’ll need a bike. These local rental locations are well spaced around the city, and each of these rides has a perfectly-based shop from where to start. Most also offer guided bike tours of the city worth checking out before heading off on some solo exploration.