To simplify your initial Montréal visit, we’ve compiled a simple list of crowd-pleasin’ attractions. Think of it as a “greatest hits” list of what to see and do in a diverse and exciting city.

In no particular order, here are 10 activities and attractions that first-time Montréal visitors might want to put on their “must see” list.

Designed by Frederick Law Olmsted (the same landscape architect who crafted New York’s Central Park), the “mountain” park at the heart of the city is the city’s most iconic landmark — and the most popular place to snap a Montréal selfie. Reach the viewpoint at the top of Mount Royal Park by walking up the stairs or with a guided tour. In the chalet at the summit, visitors will find washrooms and a small canteen for refreshments. Give yourself a breezy two hours. 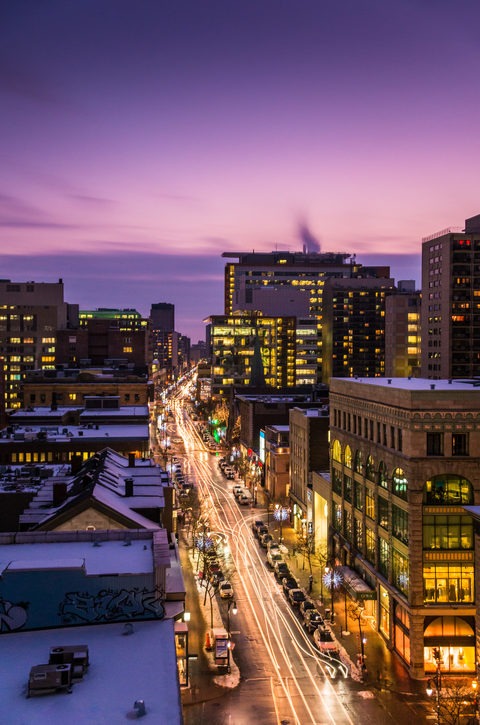 As one of the longest commercial strips in Canada, Sainte-Catherine Street is the perfect place for retail rehabilitation. You’ll find international fashion mainstays such as Zara, Victoria’s Secret and H&M. But don’t miss the regional retailers, such as Montréal-made leather goods at M0851, the coolest kicks at Little Burgundy and a plethora of options at beloved department store Simons. 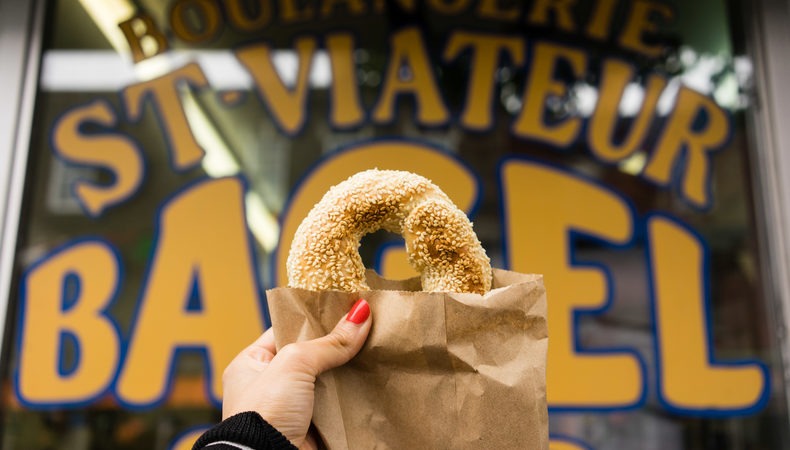 Part of the joie de vivre culture of Montréal includes chowing down on great grub. Sink your teeth into a juicy smoked-meat sandwich at world-famous Schwartz’s deli. Discover why Montréal locals fervently adore their bagels at the wood-fire bakeries on Fairmount or St-Viateur. (Clue: the bagels are dipped in honey water before baking). Sample our notorious poutine at La Banquise. Finally, quench your thirst with a locally produced beverage, such as Rise kombucha or 1642 Cola.

Head back in time (in Old Montréal)

A first-timer’s visit to Montréal is not complete without meandering through the charming cobblestone streets of the city’s old district. With juxtaposed architecture dating back as far as 1685, visitors have the opportunity to see — quite literally — how the city first began developing. Stop at Notre-Dame Basilica for a glimpse at the incredible stained glass art (and for a moment of stillness). Then head to historic Place Jacques-Cartier and install yourself on a terrace, where you’ll be perfectly positioned to watch street performers and portrait artists — and where the sangria floweth freely.

Saint Joseph is often viewed as the saint of everyday life. It’s not everyday, however, that you can visit one of the most popular catholic pilgrimage sites in the world. Saint Joseph’s Oratory is a Montréal masterpiece — the pièce de résistance among a city of one thousand stunning churches. The oratory is home to a magnificent Rudolf von Beckerath organ, which is ranked among the ten most prestigious in the world. Also, the basilica’s huge dome reaches 97 meters making it second only in height to Saint Peter’s Basilica in Rome. Temporary exhibitions are available throughout the year. Ride the metro to Côte-des-Neiges station and then walk the divine staircase to the oratory. 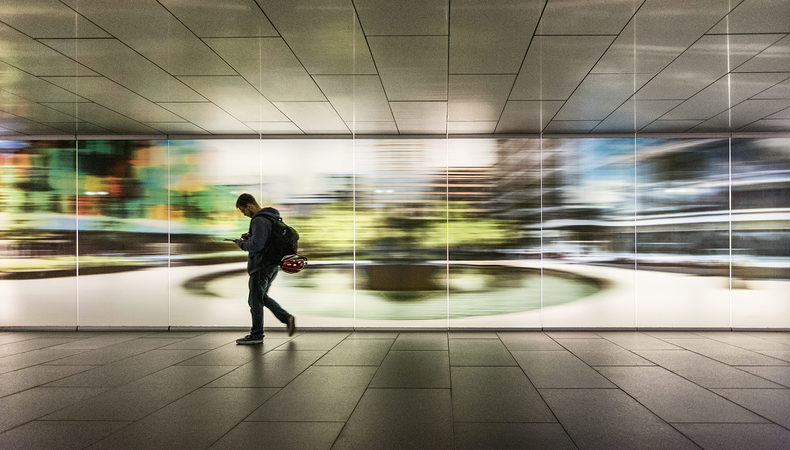 Montréal contains a vast network of pedestrian walkways — 32 kilometres (20 miles) of connecting passageways, to be exact — beneath street level. During the winter months, approximately 500,000 people circulate on this network daily, using the passages to connect with offices, trains, shops and restaurants. Referred to as RÉSO (“network” en français), the system connects the city’s convention centre, 10 major hotels and a handful of shopping malls (such as the Centre Eaton de Montréal). Grab a PDF map and get started on a truly “sub” urban adventure.

Montréalers love to eat. Sure we’ve got our characteristic local food (see above), but one of the best ways to savour the city is to visit one of the local public markets. With a wide range of regional products from across Québec, Marché Jean-Talon — located in the heart of Little Italy — is the largest and most culturally diverse market in Montréal. For a smaller yet equally delicious option, the art deco-style Marché Atwater offers an array of specialty products and delicatessen treats. (Plus it’s located beside the picturesque Lachine Canal.) Wherever you go, be sure to sample seasonal treats such as maple syrup in the spring, strawberries in the summer and Macintosh apples in the autumn.

The colourful spiral staircases of the Plateau neighbourhood present an iconic image of Montréal. In this quartier you’ll find a predominantly French-speaking community featuring an eclectic mix of artists, international students and young professionals, spiced with a healthy dose of other cultures and languages to raise the diversity quotient that much higher. For a glimpse of the Plateau, walk along Avenue Mont-Royal, stopping for a recharge at Café Névé, and then a meal at stylish bistro Chez Victoire. Or, if it’s a sunny day, we recommend doing as the locals do: grab a picnic and lounge beneath the leafy trees in peaceful Parc La Fontaine. 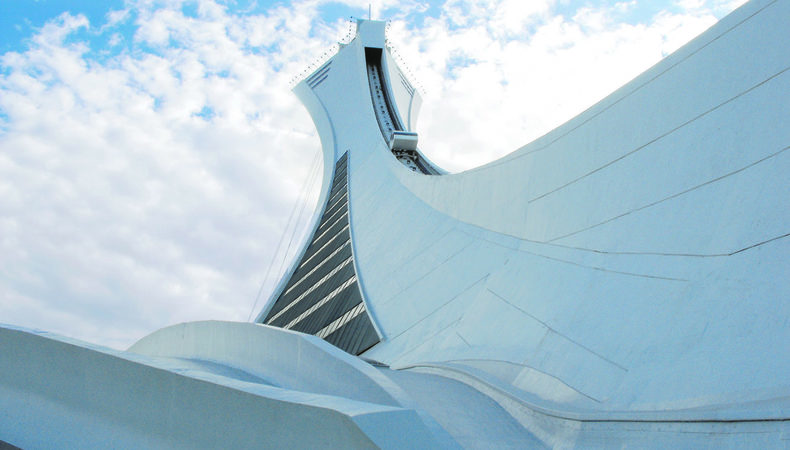 Go East (for a feast of attractions)

Montréal’s eastside neighbourhood of Hochelaga-Maisonneuve is home to a handful of awesome attractions — all within walking distance to each other. Firstly, the Olympic Stadium is a grandiose remnant from the history-making 1976 summer games, and arguably the most recognizable architectural structure in the entire city. At the soaring inclined tower of the stadium (even taller than the Leaning Tower of Pisa), visitors can ride an elevator for a bird’s eye view of the cityscape. Also in the neighbourhood are the internationally-lauded Montréal Botanical Garden, which feature seasonal installations such as the much-loved Chinese lantern festival in the autumn months. Last but not least, the kids will go wild for the critters at the Biodôme, where five ecosystems are home to over 250 different species of animals. 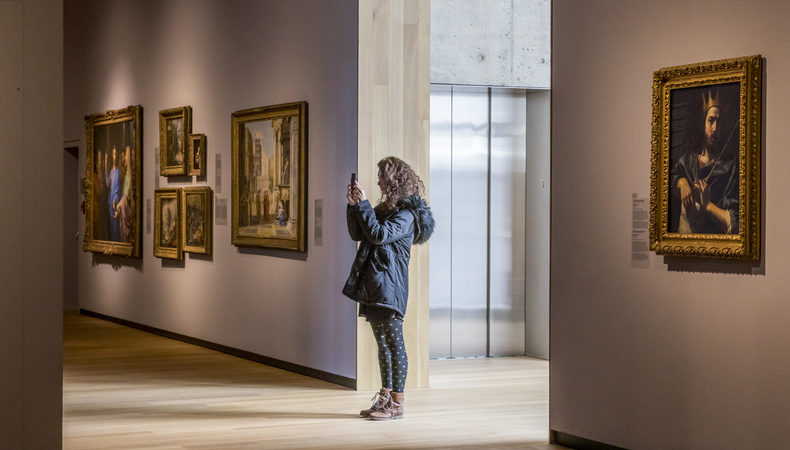 Montréal is a creative city. Artistic-inclined visitors will relish the multiple museums and galleries, home to both historic and modern works. As one of the most important institutions in North America, the Montreal Museum of Fine Arts is the premier stop for any art aficionado. The multiple rooms contain painting, sculpture, graphic art, photography and decorative art objects, and the gallery prides itself on world-class temporary exhibits. For a more modern approach, visit Canada’s leading museum dedicated exclusively to contemporary art. The Musée d’art contemporain de Montréal (MAC) features a permanent collection, however the curators truly flex their “modern” muscles with the numerous multimedia events. Finally, the Phi Centre showcases art in all its glorious forms — check out the event schedule for a listing of live performances.