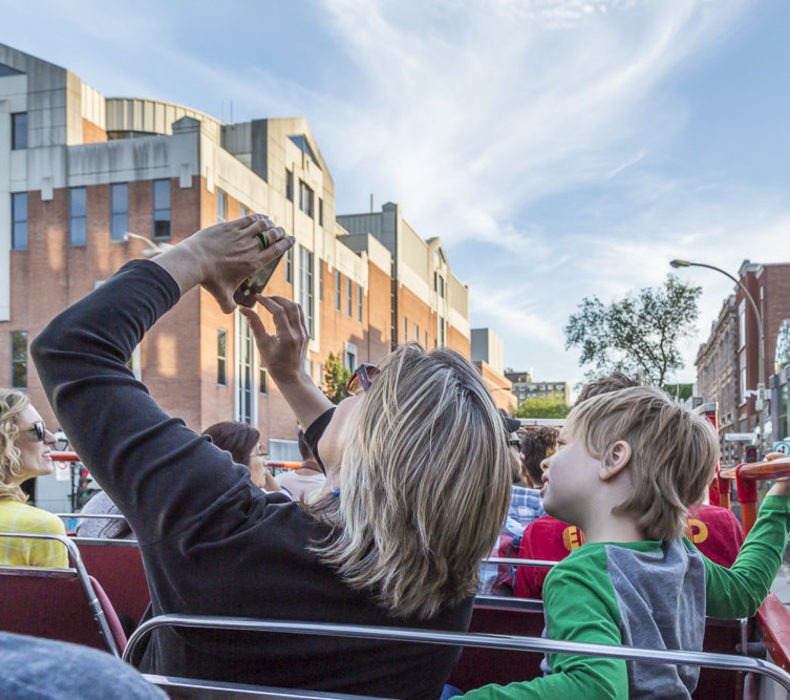 The most Instagrammable spots in Montréal [part 1]

Montréal is a very photogenic city. Visitors and locals alike have captured her many moods and seasons from many different angles and in many ways. But, we wondered, where are the most popular places in Montréal to snap Instagram pics?  We crunched some numbers (tourism data, data from our monitoring tools, etc.) and then did some intensive, old-fashioned searching to pull out the hottest spots.

Hotspot: The Basilica’s grand interior of deep blue, red, purple, silver, and gold.
Nearby: The Gothic Revival architecture of Montréal’s Notre-Dame Basilica is worth taking a few moments to savour from outside. The Basilica faces Place d’Armes, a square with a monument to Paul de Chomedey, co-founder of Montréal, in its centre. Place d’Armes is also bordered by historic buildings like the Saint-Sulpice Seminary (the oldest structure in Montréal, dating back to 1687), the New York Life Building, the Aldred Building, and the Bank of Montreal building.

Hotspot: The lookout atop Mount Royal is a must for many visitors, offering panoramic views of the city.
Nearby: The Chalet du mont Royal features French Beaux-Arts design and paintings depicting the history of the site from 1535 to 1760. Also look for the carved squirrels perched in the rafters. (The Chalet and the esplanade leading to the lookout are also popular spots for concerts and other activities in the summer.) If you are up for a bit of a hike, take Chemin Olmsted and follow the summit circuit for an up-close view of the iconic Cross atop Mount Royal.

Hotspot: Montréal’s convention centre is best known for the multi-coloured façade made up of 332 rainbow-coloured glass panels and 58 transparent glass panels on the west side of the building.
Nearby: Walk east inside the Palais to snap a few pics of Claude Cormier’s Lipstick Forest, or step outside to experience Québec artist Jean-Paul Riopelle’s kinetic sculpture, La Joute ("the joust"), the centrepiece of the square just outside the convention centre.

Hotspot: The view looking north from De la Commune Street, with the 19th-century spire of City Hall in the background.
Nearby: Too many things to list! Place Jacques-Cartier is a hub for visitors to Old Montréal and is teeming with activity every summer. Walk north to gaze up at the Nelson Monument and cross the street to see the fountain at Place Vauquelin next to City Hall (a scene from X-Men: Days of Future Past was shot there in 2013). Or stroll east along Saint-Paul Street for views of the iconic dome of Marché Bonsecours, and then continue east to Notre-Dame-de-Bon-Secours Chapel and the Marguerite-Bourgeoys Museum. This historic gem is a treasure trove of discoveries. You can also climb to the spire of the church for a glimpse of the famous angel looking out onto the St. Lawrence River.

Hotspot: The walkway leading up to La Grande Roue de Montréal, Canada’s tallest Ferris wheel. Then climb on board for breathtaking views from 60 metres in the air (the height of a 20-storey building)!
Nearby: There’s lots of action in the Old Port. Snap a selfie before you whiz through the air on the MTL Zipline. Or rent a pedal boat and take in views of the city from Natrel Basin. In winter, the Basin is transformed into a skating rink, offering lots of winter wonderland photo opps.

Hotspot: The view from the Clock Tower Quay is a favourite spot to capture this replica of England’s Big Ben.
Nearby: Continue to the Clock Tower itself and, if you’re willing to climb 192 steps, the view from the top offers beautiful views of the St. Lawrence River and Old Montréal. It’s open from May to September – and it’s free!

Olympic Stadium and the Montréal Tower

Hotspot: The Olympic Stadium is a marvel from many angles, but visitors often opt for the corner of Sherbooke and Pie-IX streets to include the Olympic rings.
Nearby: Tons! The Olympic Park site is a huge complex that includes the Montréal Tower – the tallest inclined structure in the world – and the Space for Life museums (Montréal Insectarium, Rio Tinto Alcan Planetarium and Montréal Botanical Garden). Soccer fan? Cheer on the Montréal Impact at the Saputo Stadium, a short walk from the foot of the Tower.

Hotspot: The colourful Victorian houses that line the north side of the square.
Nearby: The Square itself. New York’s Project for Public Spaces (PPS) called Square Saint-Louis “the closest thing to a European neighbourhood square you'll find this side of the Atlantic.” The Victorian fountain sparkles on a sunny day and the gazebo serves as a snack bar in warm weather. Feel like a stroll? Meander down neighbouring Drolet or Henri-Julien streets to get a taste of the Plateau, complete with classic winding staircases.

Hotspot: To get the full view of the steps leading to the Oratory and its signature dome, take your shot just inside the entrance gates (3800 Queen Mary Road).
Nearby: The interior of this religious heritage gem is magnificent and the Votive Chapel with walls of flickering candles is a popular spot. The gardens are a must-visit as well, especially in the summer when they are as beautiful as they are serene.

Hotspot: You could take a shot of the sign at the entrance (7070 Henri-Julien Street), but the real magic happens inside.
Nearby: The Jean-Talon Market is a gourmet adventure and a feast for the eyes as well as the palate. This public market is a veritable symphony of tastes, colours and aromas. If you want to walk off some of those samples and take some pics in Little Italy, just head a couple of blocks west for more discoveries.