Where to eat smoked meat in Montréal

Smoked meat is one of the foods that put the city of Montréal on every food lover’s map and finds itself on every foodie destination bucket-list. This dish has roots that date back over 100 years and is undoubtedly a part of Montréal’s identity as “The Big O”, the Notre-Dame Basilica, and the Canadiens – but more delicious.

What is “Montréal smoked meat”? Its exact history is shrouded in mystery and many stories exist on who was responsible for introducing it to Montréal. Of the various accounts of lineage, all point to Jewish diaspora from Romania or Eastern Europe. Montréal smoked meat is brisket brined for up to 14 days in savoury spices like whole peppercorns, coriander, mustard seed, and garlic, then smoked and finally steamed for hours before plating. Not to be confused with New York style pastrami – although eaten the same way, on rye bread with yellow mustard – Montréal smoked meat uses the entire brisket, which includes the variable fatty parts of the muscle, while pastrami uses the navel, cut which is inherently leaner. 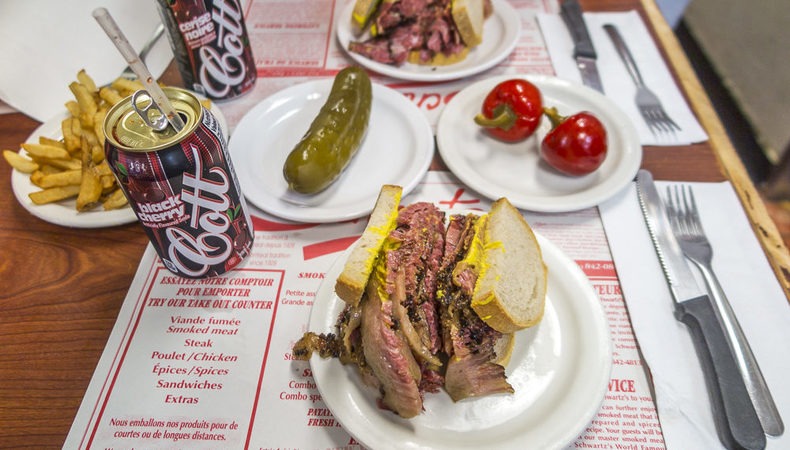 With a few major players on the smoked meat scene, people who pledge alliance to a restaurant will shamelessly argue with anyone who opposes their discerning palate.

One of these institutions is without a doubt Schwartz’s. This landmark on Saint-Laurent Boulevard has been slicing up smoked meat since 1928. It boasts a 10-day brine which, in tandem with their spice mix, produces the signature taste exclusive to Schwartz’s. Here, you can order your meat on a scale of “lean” to “fat,” but locals usually order “medium-fat,” the sweet spot at which die-hard smoked meat aficionados swear the stars align and magic happens.

Directly across the street from Schwartz’s is another just as famous Montréal landmark, Main Deli. With its own smoked meat recipe and equally secretive preparation technique, this casually famous diner has remained friendly and neighbourly for the past 40 years.

Another Montréal smoked meat institution is Lester’s Deli in the Outremont neighbourhood. Still family owned and run (for over 60 years!), this spot offers a great patio in the summer and kitschy tchotchkes on the walls that would rival any bubbi’s china cabinet.

Restaurant Briskets Montréal is in the Quartier des spectacles downtown. Founded in 1901, it's one of the oldest brasseries in Montréal. It is primarily known for its famous brisket. A perfect combination of family ambiance, warm décor and impeccable service makes Briskets Montréal a destination for smoked meat.

Le Roi du Smoked Meat (“The King of Smoked Meat”) is the best smoked meat destination in the Rosemont-La-Petite-Patrie neighbourhood. Located along the iconic covered mall on Saint-Hubert Street, this modest spot serves traditional diner fare along with its own signature smoked meat.

Jarry Smoked Meat is one of the best places to go when you get a hankering for smoked meat no matter what time of day. Open 24 hours for the past 45 years, this smoking spot has been a landmark in Saint-Léonard, serving locals the finest briskets for generations.

Located on one of the busiest intersections in the city, Restaurant Le Fameux serves up outstanding smoked meat on the Plateau. The restaurant is open until 4 a.m. on weekdays and 24 hours on weekends. Check out the classic smoked meat sandwich or some of the other menu items that feature this Montréal favourite. Smoked meat on poutine, rigatoni, pizza, lasagna or submarines. There’s even smoked meat mac and cheese. You name it, it’s probably served there—with smoked meat!

Dunn’s is also a name that’s synonymous with Montréal smoked meat. Myer Dunn founded the original deli in 1927, but it wasn’t until 1955 that he opened the flagship restaurant at 1249 Metcalfe Street in the heart of downtown. Gone are the large deli fridges displaying cold cuts and pickles, but the nostalgia remains with colourful murals and walls adorned with newspaper clippings documenting Dunn’s history. Serving more than just smoked meat, the menu doesn’t stray far from what the restaurant built its name on, including interesting items like smoked meat spring rolls and smoked meat fried rice.

Reuben’s Deli and Steakhouse has long been a favourite with locals and visitors alike. Located in the heart of the Golden Square Mile, Reuben’s celebrates the time-honoured tradition of hand-cut smoked meat—as evidenced by the clicks and clacks coming from behind the deli counter, where expert carvers show off their craft. The restaurant’s proximity to the Bell Centre makes it a popular spot for a pre-game or post-concert bite.

Wherever you get your fix, a trip to Montréal isn’t complete without stuffing your face with our famous smoked meat. Go ahead and order your sandwich with mayo if you’re brave enough to face the glares from locals, but whatever you do, don’t call it pastrami!