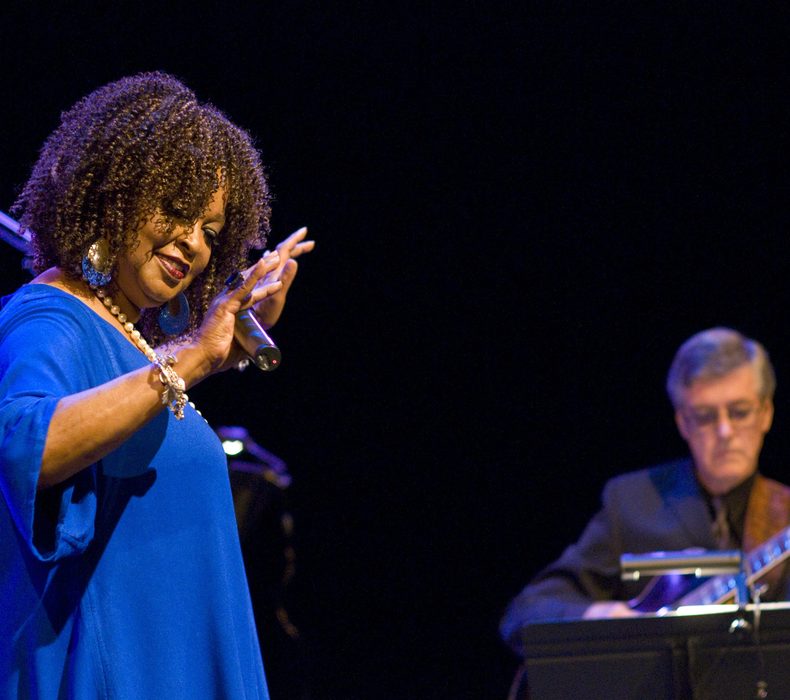 Jazz, soul and blues legends Ranee Lee, Alma Faye Brooks, Kim Richardson, Dawn Tyler Watson and Michelle Sweeney adore their hometown of Montréal where audiences celebrate the divas. These queens have performed on stages around the world but – as each points out – there is nothing quite like headlining in Montréal.

Canada’s First Lady of Jazz Ranee Lee has been wowing audiences for decades on stage and screen, from acting opposite Billy Dee Williams in the movie Giant Steps to creating and starring in the hit musical Dark Divas. Lee wrote the bestselling children’s book Nana What Do You Say?, was appointed to the Order of Canada in 2006, teaches at McGill University’s Schulich School of Music, and her Juno Award-winning concert album Ranee Lee Lives Upstairs was recorded at Montréal’s Upstairs Jazz Bar & Grill, named one of the great jazz clubs on the planet by Downbeat magazine.

Ranee Lee: Fifty years ago, Montréal opened its arms to me and embraced me, and called me daughter. It gave me the opportunity and a home base to pursue my careers, and was a safer place to raise a family. I found my utopia. With the love of my life Richard Ring – a brilliant musician – and a Montréal son, Montréal for me represents faith, hope and endurance. It takes courage to live in today’s world, and Montréal has taught me to be courageous.

What is your favourite thing to do in Montreal?

RL: Montréal is a hallmark for quality and enjoyable entertainment. I have performed around the world, and one of my favourite venues can be found right here in Montréal: Upstairs Jazz Bar & Grill. Great food, great chef and staff, amazing national and international jazz musicians and artists, the décor is warm, friendly and inviting. My musicians and I have enjoyed a longstanding relationship with Upstairs for many years, it’s one of the blessings of the city!

What is one of your most memorable Montreal concerts?

RL:  I have probably played every venue in this city at one time or another, each has its own memorable moments. Choosing one is difficult. But playing the role of Billie Holiday in Lady Day at Emerson’s Bar and Grill at Club Soda in 1987 was extraordinary. It was directed by Roger Peace to whom I owe a great debt of gratitude for believing in me and giving me that role. I was the first to play the role in Canada, we played to sold out audiences here and everywhere, and I would win the Dora Mavor Moore award. It cemented my career.

Supersonic soul diva Alma Faye Brooks grew up from singing as a big-voiced kid at historic Union United Church in Little Burgundy to belting out numbers in touring musicals like Hair. Back in the 1970s when Montréal was disco’s Second City, Brooks burst onto the scene with her signature American disco hit Stop, I Don’t Need No Sympathy and signed to Casablanca Records. Today, the frontwoman of La Gioventu band fills dancefloors at corporate and private parties and still enjoys headlining intimate Montréal nightclubs.

Alma Faye Brooks: Montréal has always been home base, no matter where I travel in the world. I love Montréal for its vast diversity. The city is a melting pot of different cultures.

AFB: I like to visit Mount Royal Park with my family on a summer’s day or enjoy the foliage in the fall. I try to climb the 400 steps up the mountain. I also like to take in outdoor concerts during the summer festival season or jump up in the Carifiesta parade.

AFB: In the early 70s I was part of the Afro Combo Drill which consisted of teens from the Black community. We would dance, chant and sing. We took it very seriously, sewed our own costumes and raised money to fund our trip to Connecticut for a youth competition which we won, representing Canada.

One of the founding members of our troupe was Sharon Whims, a student at Westmount High who secured us a spot on talent night. But when we arrived, we were told to wait our turn in the basement. Then the organizers forgot about us. We waited and waited until the show was coming to a close. Then we decided to take the stage – Afros, dashikis, bell bottoms and all!

You have to understand tensions were high at that time in history. There were race riots south of the border. We knew we had to maintain our dignity and do what was initially asked of us. So we danced our way onstage shouting one of our chants: “UMM GOW WA! UMM GOW WA! We got the soul power!”

It was a life-changing experience, standing up, demanding to be treated with respect. No violence, just a song and a dance. Peace! The organizers apologized to Sharon for the misunderstanding, and another alumni of Westmount High, Kamala Harris, went on to become the first woman and woman of colour to be elected Vice President of the United States of America.

Three-time Juno Award winner Kim Richardson was born to be a star: the daughter of Canadian stage legend Jackie Richardson, Kim went from dueting with Stevie Wonder at age 17 – they sang Master Blaster at Club Bluenote in Toronto back in 1983 – to stealing the show as Motormouth Maybelle in the $3-million blockbuster French-language Montréal remount of Hairspray at Theatre St-Denis. Kim regularly sings the American and Canadian national anthems at Canadiens de Montréal home games, and also sang both anthems at the last-ever Montréal Expos home game. Jazz lovers pack the house whenever she headlines Montréal clubs like Le Balcon, Upstairs Jazz Bar & Grill and Diese Onze (which, like Upstairs, is ranked by Downbeat as one of the top jazz clubs in the world). 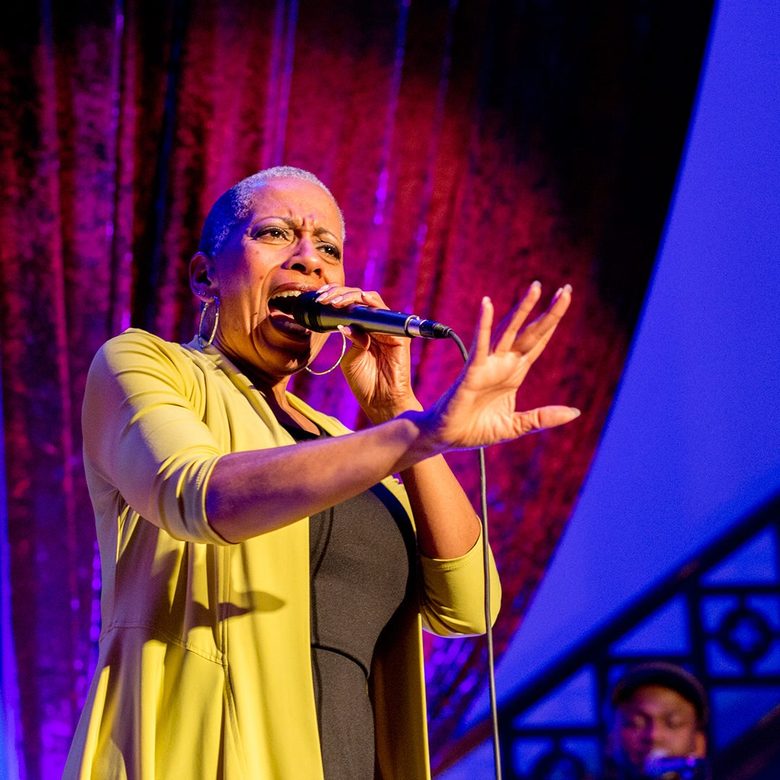 Kim Richardson: Montrealers work to live, not live to work. Sure, they work hard, but they like to play hard. Montrealers like to party. They like to let the good times roll. And being in the business that I’m in, I can tell you Montréal audiences are a lot of fun.

KR: Summer in Montréal is dope. I can’t narrow it down to one festival because they’re all great and diverse. You really get a sense of the multiculturalism here, it’s just so vibrant and I just love to see that.

KR: Headlining my own show on the big outdoor stage at the Festival International de Jazz de Montréal in 2007 was a pretty big deal. I had just released my album Kaleidoscope and thought I’d do a few small shows. Next thing I knew the jazz fest put me on the big stage in front of a gazillion people. I was scared to death. But my band had my back. You just try to stay in the moment because you’re so in awe of what’s happening. It took me a couple of minutes to settle the nerves which doesn’t usually happen to me. It was pretty awesome.

Montréal’s Queen of the Blues Dawn Tyler Watson can sing anything, as anyone who has heard her belt out her monumental rendition of Edith Piaf’s Je ne regrette rien will attest. In a sterling career spanning more than two decades, four continents, five albums and countless national and international awards – including winning the prestigious International Blues Challenge in 2017 – Watson is a force of nature and regular headliner at Upstairs Jazz Bar & Grill. Her fifth and latest album, Mad Love, also won the 2020 Juno Award for Best Blues Album.

Dawn Tyler Watson: I moved here in 1988 to go to Concordia University and I started my career after I graduated. From the very beginning I was embraced. I always really felt at home here, even as an Anglophone artist. I love Montrealers and the multi-ethnicity, diversity and multiculturalism of Montréal.

DTW: I love visiting city neighbourhoods like Little Italy, Chinatown, the Village.   But whenever anybody is in town, I take them up to the Belvédère Camillien-Houde lookout on Mount Royal to see the east side of the city. I actually filmed my Juno Award acceptance speech there.

DTW: After I had emergency heart surgery in 2016 and then won the International Blues Challenge three months later, we played a hometown concert at the Festival International de Jazz de Montréal. Anytime I play the jazz fest it’s a huge treat. I play at festivals all over the world, in Russia, France, Germany, Brazil and all across the USA. But it’s not the same as playing in Montréal. There was 100,000 people at that show and all your friends are out there! It was just an amazing feeling, I felt like a million dollars playing my original music in my hometown in front of my people. It was beautiful.

Soul legend Michelle Sweeney has been a Montréal favourite for nearly four decades. She became a star in the 1986 national tour of Ain’t Misbehavin, co-starred in the award-winning NFB film Strangers in Good Company, played the school principal in the hit YTV sitcom Student Bodies and starred in the sold-out run of her autobiographical one-woman show Her Songs, My Story (featuring the music of Aretha Franklin) at the Centaur Theatre in January 2020. A favourite of LGBTQ audiences, the gay icon’s appearance at the 1996 Black & Blue circuit party at Olympic Stadium – when she descended from the roof like an angel to join Chorale Ganymède choir singing Reach Out by Sounds Of Blackness for 18,000 dancing on the stadium field – is the stuff of legend. An electrifying live performer, Sweeney and her band raise the roof when she headlines Upstairs Jazz Bar & Grill and Le Balcon.

Michelle Sweeney: I truly love the diversity of Montréal. The different nationalities, the different ethnicities and languages. I’m so glad my children had the opportunity to be raised in a city like Montréal.

MS: I live close to Saint Joseph’s Oratory on Mount Royal and when I was younger I would go up there all the time. After entertaining and singing in nightclubs, my heart just needed to go to a place that was safe. I found the Oratory was a special place for me. I used to walk up there all the time, up those steps, and I just would be quiet up there. To me, it’s one of the most magnificent places. It was the first place I went to when I came to Montréal many, many years ago.

MS: I sing for the people, so it’s for audiences to choose their most memorable concerts because moments are different for everybody. But at the Black & Blue circuit party at Olympic Stadium in 1996, I remember they had me come out on a hydraulic lift. It was crazy! They didn’t have any banisters, nothing for me to hold on to, and I came down from the stadium roof to sing with a choir. I have always loved gay audiences because they have always been full of love. And the more drama they wanted, the more I gave. That night thousands of people were screaming and dancing, it was just an incredible moment.

Read all about the fabled history of jazz in Montréal and the city’s jazz and blues nightclubs and festivals.