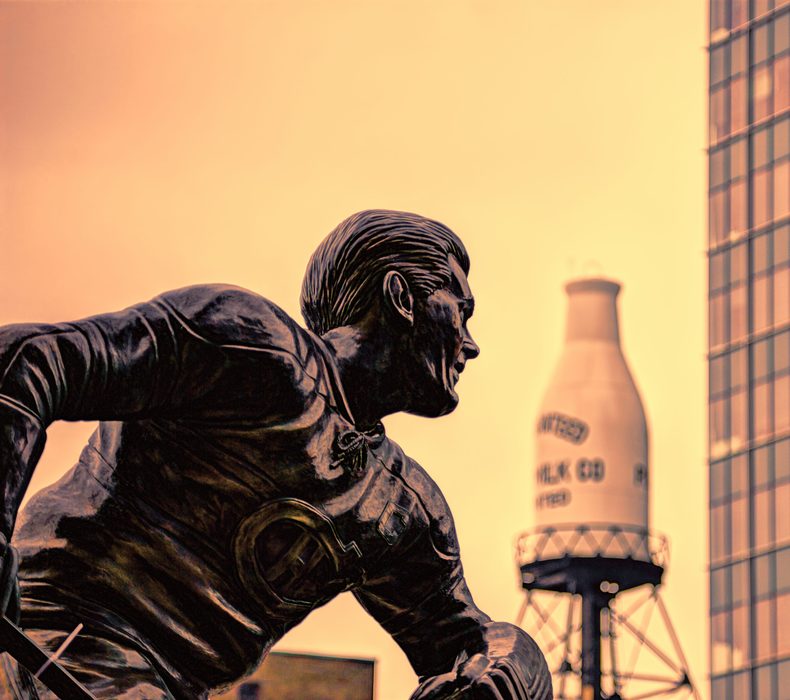 The Montréal of Maurice “Rocket” Richard

Hockey icon Maurice Richard adored his hometown of Montréal where he had a magical connection with fans, transcended the sport and was idolized as a god.

Nicknamed “The Rocket”, the fiery Richard was the greatest hockey player of his generation and one of the best in NHL history. During 18 NHL seasons – all with the Canadiens de Montréal, known affectionately by locals as the Habs (an abbreviation of “les habitants” which refers to the 17th-century settlers of New France) – the Hockey Hall of Famer won eight Stanley Cups, was the first man to score 50 goals in 50 games, in 1944-45, and was also the first to reach 500 goals, in 1957.

Here are some Montréal landmarks in the life of Maurice Richard.

The eldest of Onésime and Alice Richard’s eight children, Maurice Richard grew up in the Nouveau-Bordeaux neighbourhood in the Montréal North borough of Ahuntsic-Cartierville.

His working-class family loved hockey: his younger brother Henri Richard joined the Canadiens at the beginning of the 1955-56 season, was nicknamed “Pocket Rocket” and went on to win 11 Stanley Cup titles with the Habs before he was also inducted into the Hockey Hall of Fame.

In Ahuntsic-Cartierville there is a splendid mural of Maurice Richard (1014 Fleury Street E.) created by artists Dodo Ose and Zek in 2015. The mural also features a street hockey scene with kids and is aptly located in an alley that is a popular location for youth street hockey in Ahuntsic.

For many summers – even after he began playing for the Canadiens de Montréal in 1942 – Maurice Richard worked in the Canadian Pacific Railway’s Angus Shops where his father worked as a machinist. When CP Rail closed the Angus Shops in 1991, the site was redeveloped into the Technopôle Angus eco-district, the first diversified green neighbourhood in Québec.

Before joining the Canadiens for the 1942-43 season, Richard played for the Verdun Maple Leafs at Verdun Auditorium, the classic hockey arena that opened in 1939. Verdun Auditorium has also hosted pro wrestling matches as well as concerts by such performers as Bob Dylan, Ozzy Osbourne and The Clash.

There are several statues of Maurice Richard in Montréal.

A life-sized cement and steel statue of Richard by Québec artist Paule Marquis stands where centre ice used to be in the Forum de Montréal which is now an entertainment-cinema complex.

The Forum – revered as the cathedral and temple of hockey – was actually built for Habs’ NHL rivals the Montréal Maroons in 1924. The Canadiens also moved into the Forum permanently in 1926 and both teams shared the arena until the Maroons (who won two Stanley Cups) folded in 1938. The final Maroons game took place at the Forum against the Canadiens on March 17, 1938. The Habs won 6-3.

Meanwhile, the Canadiens played their final game at the Forum on March 11, 1996, beating the Dallas Stars 4-1. In the post-game closing ceremony, each living former Habs captain (including Jean Beliveau and Bob Gainey) passed the torch to the next in line, and fans young and old gave a visibly emotional Maurice Richard a thunderous seven-minute standing ovation.

The Canadiens recorded more than 1,500 wins, scored over 10,000 goals and won the Stanley Cup 22 times at the Forum (the Habs have won 24 Stanley Cups). The Canadiens won eight Stanley Cups with Maurice Richard, a left-handed shot who played right wing.

After the Canadiens moved into the Bell Centre in March 1996, the Forum was used to film arena sequences for the Brian De Palma film Snake Eyes, released in 1998.

A bronze statue of Maurice Richard in action – this one by sculptor Annick Bourgeau – stands outside the front entrance of the Aréna Maurice-Richard in the Olympic Park. The arena hosted boxing and wrestling competitions during the 1976 Summer Olympics and was home to the now-defunct Quebec Major Junior Hockey League Montréal Rocket hockey team, named for Richard. The Laval Rocket, the AHL affiliate of the Canadiens, are also named after Richard.

Great hockey rink in the sky

After a long battle with abdominal cancer, Maurice Richard died on May 27, 2000, at age 78. He also suffered from Parkinson’s disease.

The day before his May 31 state funeral at historic Notre-Dame Basilica in Old Montréal – the first for a non-political figure in Québec’s history and broadcast live across Canada – Richard lay in state at the Bell Centre where more than 100,000 mourners viewed the casket.

Outside, for the funeral procession from the Bell Centre to Notre Dame Basilica, tens of thousands more Montrealers lined downtown Saint Catherine Street where Richard had paraded many times with the Stanley Cup and where fans famously rioted in 1955 to protest Richard’s NHL suspension for fighting. Former teammates, including his brother Henri, carried the Rocket’s coffin. The next day, the headline in The New York Times read, “Maurice Richard’s Funeral Brings Canada to a Standstill.”

Years after his passing, Maurice “Rocket” Richard is still venerated in Montréal where hockey fans can visit his grave at Notre-Dame-des-Neiges Cemetery on the slopes of Mount Royal.

Richard – who had never seen a game at the fabled Forum de Montréal until he played there – helped popularize hockey around the world. So it is fitting the Canadiens de Montréal permanently retired his No. 9  jersey, countless books have been written and films made about the Rocket’s incredible life and career, and each year the NHL awards the Maurice Richard Trophy to the league’s leading goal-scorer.