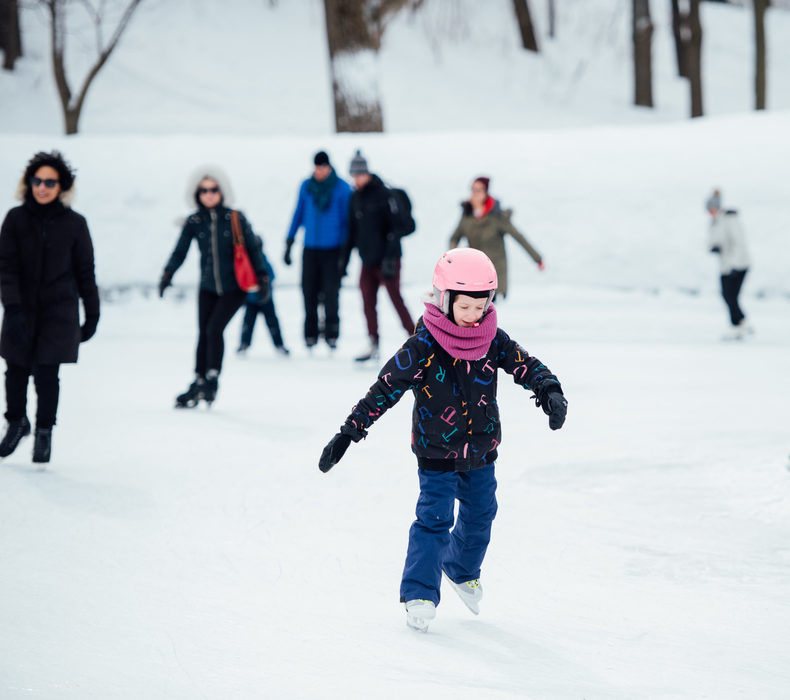 Where to rent winter sports equipment in Montréal

Montréal in winter is an experience like no other, with its snow-covered rooftops, sparkling streets and cozy hotels and restaurants. But if you really want to experience the city like a Montrealer, put on a pair of ice skates, snowshoes or cross-country skis. We've got the scoop on where to rent winter equipment, stay warm and active and see the city sights at the same time. 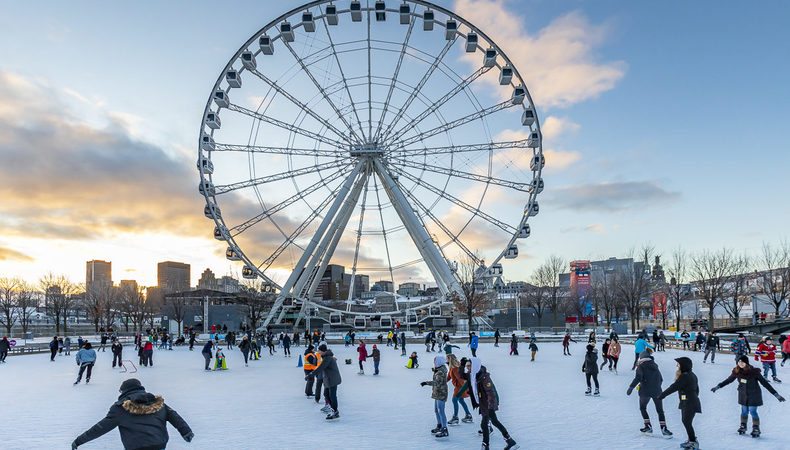 The Old Port of Montréal ice skating rink is one of Montréal's most picturesque, with views of Old Montréal's historic architecture, including the neoclassical silver dome of Marché Bonsecours and the angels atop Notre-Dame-de-Bon-Secours Chapel (the one in the middle is the “Lady of the Harbour” in Leonard Cohen's song Suzanne), La Grande Roue de Montréal, the Jacques-Cartier Bridge and beyond. Among the city's biggest refrigerated outdoor rinks, it opens in early December and doesn't close until winter's over in mid-March, amping up the on-ice fun with DJ nights, cardio workouts, karaoke and other themed events. You'll also find skate rentals for all ages, lockers and Bistro Bonsecours, where you can warm up, sip hot chocolate and have a snack. 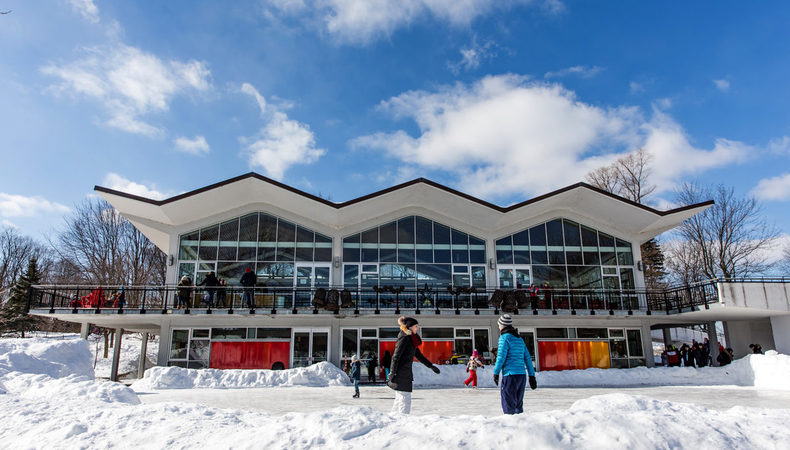 See a different side of Montréal's most famous park during the winter months, when Mount Royal Park boasts ]an outdoor refrigerated rink at Beaver Lake, cross-country skiing and snowshoeing trails, snow tubing and more. Starting in mid-December, rent ice skates, skis and snowshoes at the park from nature stewardship organization Les amis de la montagne in the Beaver Lake Pavilion. Grab a map and explore on your own – the view from the Kondiaronk Belvedere is just as photo-ready and breathtaking in winter (and when you catch your breath again, you'll be able to see it – so “Instagrammable”!). Or go on a nature-inspired, eco-friendly tour with Les amis de la montagne to learn more about the park's history and ecology and meet some locals too. 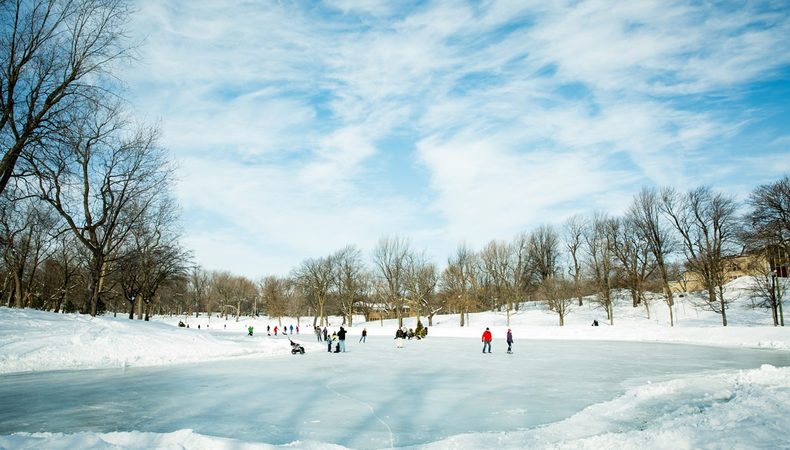 A slice of nature in the Plateau

A charming natural ice rink lit softy all winter, with a fountain at its heart and surrounded by trees, the Parc La Fontaine ice skating rink is definitely unforgettable. Once the pond's surface is solidly frozen, locals and tourists of all ages can be found skating along the rink's meandering path, day and night. Rink-side, you can rent ice skates, pick up a new toque and mittens, and even take a skating lesson. Whether you're on a romantic couples getaway or looking for outdoor things to do with energetic kids, take advantage of the park's proximity to restaurants and stores on Rachel Street, Mont-Royal Avenue and Saint-Denis Street, where you can fuel up before or after skating or pick up a snack. 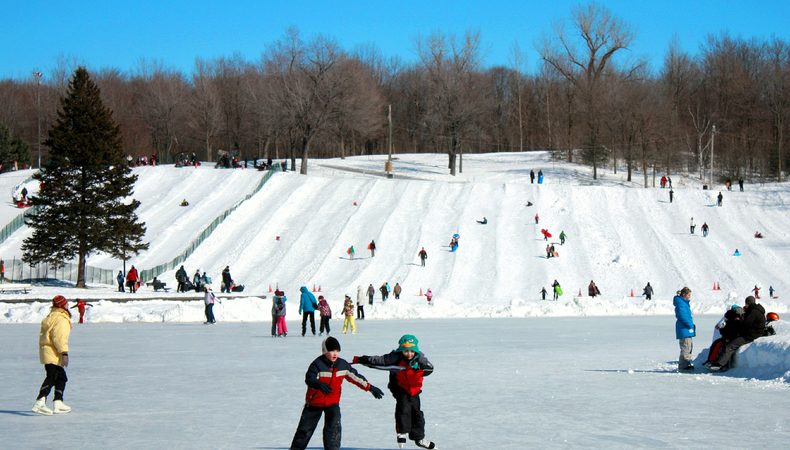 Adventures in the city's South-West

Skate like a pro hockey player at BLEU BLANC ROUGE refrigerated outdoor rinks at Parc Willibrord in the Verdun neighbourhood (so many good restaurants!) and in Parc Hayward in LaSalle – they're bigger than most rinks because they were built to match official National Hockey League size by the Montréal Canadiens Children's Foundation. Also in LaSalle, go snowboarding, snowtubing, sliding and more at snow park and winter village Pente à neige in Parc Ignace-Bourget near Angrignon metro, where the hills are groomed regularly and instructors can teach you all the basics. 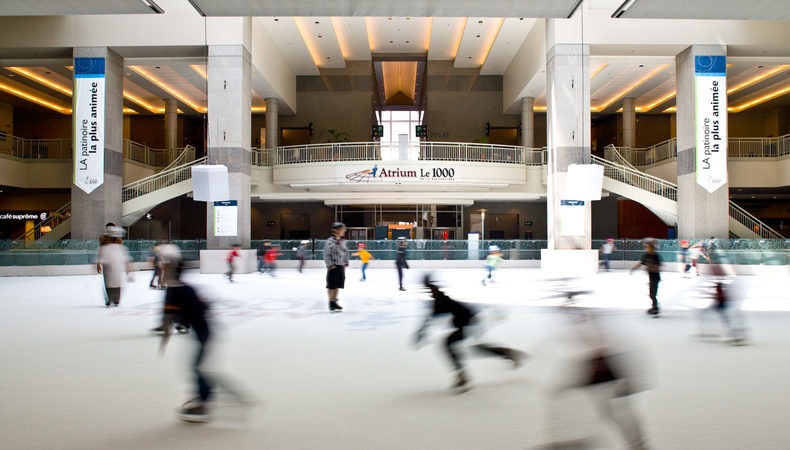 For a change, or if the weather's particularly cold, head indoors to the lively atmosphere of Atrium Le 1000, a skating rink located in one of the city’s tallest buildings, Le 1000. A windowed glass dome lets natural light onto the ice, while seasonal lighting and year-round events maintain a festive mood. Atrium Le 1000 also plays music to skate by, offers rentals and skating lessons for kids and adults, features a food court with several restaurant options and can be conveniently reached through the Underground Pedestrian Network from Bonaventure metro station.