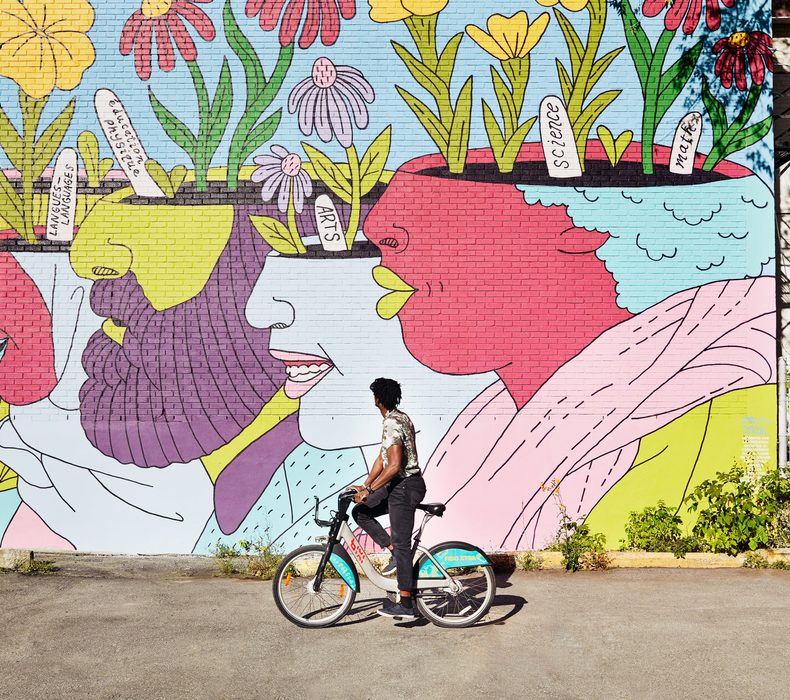 Summer murals to get you into the island vibe

The days are getting longer, and the hot, steamy temperatures have once again washed up on our shores. It’s time to bust out the sunscreen, hop on the bike, stay hydrated and hope for that nice island breeze as you venture out to check out some colourful Montréal sites and sounds. Here’s a short list of some impressive murals, each with a vibe for the season perfect for a daytime excursion.

Corner of Duluth and Coloniale

Local pop artist Whatisadam and co-owner of Montréal’s Station 16 Art Gallery is no stranger to the public art scene. His massive Maple Sizzurp cans dotted the Saint-Laurent Boulevard sidewalks a few years back (I’m proud to say I have an original on a wall at home!) and for the 2018 edition of the MURAL Festival he gave us Summer Camp 67. This is a nostalgic summer scene from the 60’s that could honestly be set in any of our parks today. There are nods to local culture complete with an Expo 67 pin, Labatt 50 can, a fleur de lys and a Roots Canada shirt worn by one of the girls; Roots sponsored this wall. The orange background is tagged with copies of graffiti found on Montréal streets.

The Jeanne-Mance housing complex is dotted with works of public art in collaboration with the not-for-profit and open air art gallery creator, MU. The common theme in most of the murals set there is nature and vegetation which pairs well with the complex’s ethos of being a green enclave, smack downtown. Each of the seasons have been depicted on separate walls and Hot Summer Night truly captures a Montréal summer evening. There are fireworks from the competition off the shores of La Ronde, tam tams on the mountain and festival goers raving the night away. Both artists are Philadelphia based, fitting, as the Philadelphia Mural Arts Program was the inspiration for MU’s creation.

Waxhead spent a few days back in 2019 brightening up a large wall at the high school on Beaubien East. He’s hit the city hard with his playful and colourful works especially around the Plateau Mont-Royal. We were lucky enough to have him paint a few back sheds in our alleyway in Parc Extension where I live. A few years back he also took over the Saint-Laurent Boulevard sidewalks with his large spray cans and hopscotch games. The school piece includes some of his signature creatures, creations and styles. There are fields of spinach leaves, colourful pencil people, long and very scaly serpents. The piece holds down the fort while school is out for the summer.

Earth Crusher was created by Montréal graffiti writer Dré, now part of the well respected and internationally known A’Shop Crew based in Hochelaga-Maisonneuve! Earth Crusher is all about reflecting the financial and political leaders of today aiming at maximizing profit, quick returns and showing no empathy for the earth, its people and anything sustainable. With nothing in its way Earth Crusher is a guaranteed solid return. I first found this piece walking south down Saint-Mathieu and at an eye’s level saw nothing but a cute typical summer scene in the park. It seemed to be a boy and his mom enjoying a book at La Fontaine Park. Further away looking back I noticed the creepy corporate aura of Earth Crusher preying on the family from behind the trees. I absolutely love it!

Corner of Président Kennedy and Jeanne-Mance at Place des Festivals

For as long as I can remember, this piece reminds me of summer in Montréal. It has been the backdrop to the hundreds of festivals I have visited in the now Quartier des Spectacles area. In fact, it was there long before the creation of the QDS, since 1972 to be precise, making it the oldest mural in the city! It was part of a project named ArtWalls at the time that focused on a few Canadian cities and this wall with its red lips and clouds of smoke rising above the mouth was funded by Benson & Hedges, très 70s. When some of our larger festivals finally make their way back downtown towards summer’s end, take a minute to go backstage and admire her!