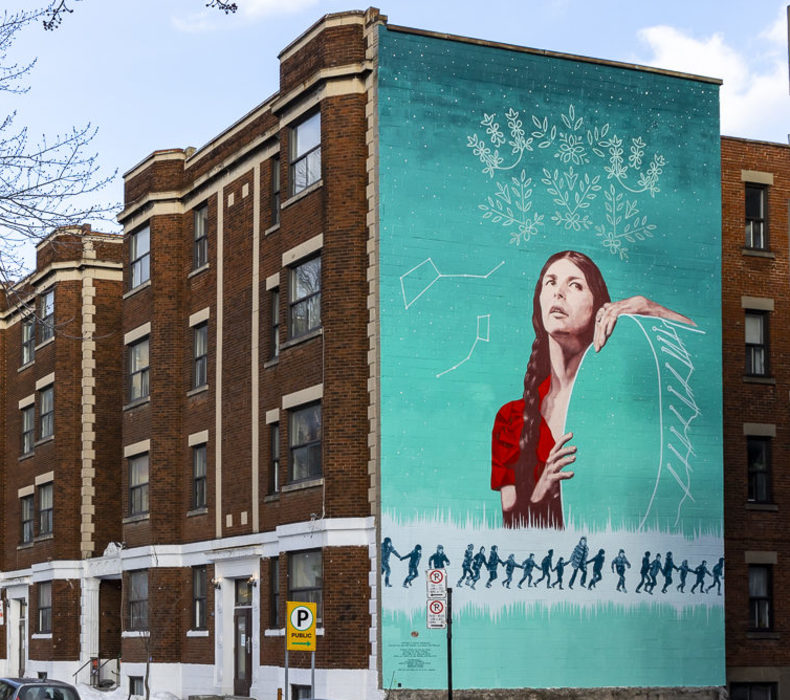 Every day we see women innovating in social, economic, cultural and political spheres around the world and right here at home in Montréal. This International Women's Day, March 8, we’ll be celebrating their achievements and raising awareness about women's equality, with a focus on this year’s International Women’s Day theme: Gender equality today for a sustainable tomorrow. 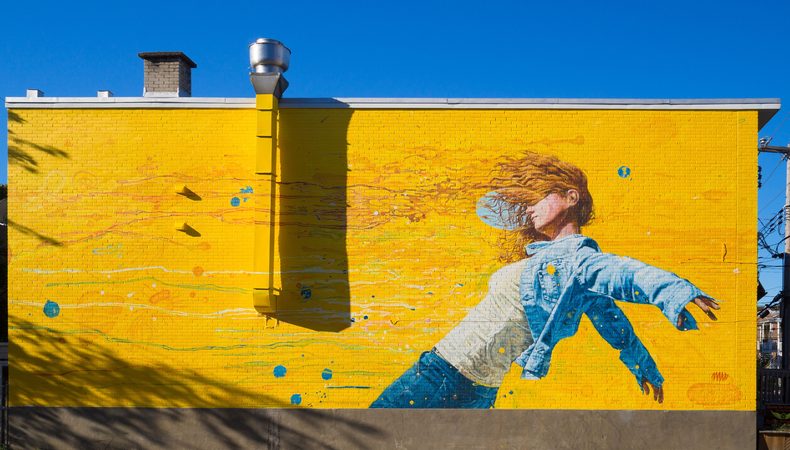 Montréal has no shortage of change-making women accomplishing amazing things and challenging expectations, every day in every industry. Not exhaustive by a long shot, our list names but some of women making a difference in business, science and technology, arts and culture, gastronomy and beyond in Montréal today.

The founder and CEO of BKIND, Marilyne Bouchard went from microbiologist to successful entrepreneur when she developed her Montréal-based eco-friendly cosmetics brand for sensitive skin. With a background in fashion and commerce, CEO and co-founder of BonLook Sophie Boulanger took eyeglasses fashion to the next level online and in retail stores across the country. Founder of Stimulation Déjà Vu, Audrey Bernard combines cognitive science, creativity and emotion to create one-of-a-kind olfactory experiences for individuals as well as for events – including their latest, a three-in-one antibacterial spray with a pleasing scent.

Entrepreneur, activist, author and Librarie Racines bookstore founder Gabriella G. Kinté shines a spotlight on the stories, culture and experiences of Black and other racialized people – she  recently expanded with an online boutique. Founder and director of bilingual media platform Lez Spread the Word, Florence Gagnon continues to boost LGBTQ voices in Québec and around the world. Vice President and Partner at URBANIA Média Raphaëlle Huysmans recently launched Urbania France into the French multi-media landscape.

Esther Youte, Stéphanie Jecrois and Carla Beauvais are three of the co-founders (along with Williamson Dulcé) of technology platform Unite Prosper (UP), an initiative of non-profit organization 0rijin Village, equipping entrepreneurs from Black communities with innovative technology solutions. Co-founder and CEO of ready-to-cook meal delivery company Cook It, Judith Fetzer recently grew with the acquisition of competitor MissFresh. Montreal Canadiens' Executive Vice President and Chief Commercial Officer since 2016, France Margaret Bélanger, has become in August 2021 the President of the Sports & Entertainment division at Groupe CH and is one of a few women in NHL upper management – she’s now on the new Inclusion Executive Council, developing actions to fight racism and advance inclusion and diversity in hockey and the NHL.

Pediatric emergency physician at CHU Sainte-Justine, recipient of the Order of Canada, and long-time epidemic fighter with Médecins sans frontières, of which she was president for six years, Dr. Joanne Liu joined the Independent Panel for Pandemic Preparedness and Response in 2020 to evaluate the world’s response to COVID-19. Director of the Division of Gynecologic Oncology and the Women’s Health Research Unit at the MUHC, Dr. Lucy Gilbert was named one of the Top Women of Influence for 2021 for her work in detecting ovarian and endometrial cancers.

Leader of the Facebook AI Research (FAIR) Lab and co-director of McGill University’s Reasoning and Learning Lab at McGill University, Joëlle Pineau has received a Governor General's Innovation Award and continues her cutting-edge research as part of the Montréal’s AI community. As the first woman CEO of Anges Québec, a leader in the province’s early stage investment ecosystem, Genevieve Tanguay has spent the past year advancing innovators in technology, particularly in the Life Sciences.

Montréal scientist and biomedical engineer Azadeh Dastmalchi is the founder of VitalTracer Ltd. and creator of the new VTLab smartwatch, set to monitor al vital signs and aid in early detection of COVID-19. Named on Forbes’ 30 under 30: Energy list for 2021, HaiLa Technologies founder Charlotte Savage developed technology that enables battery-free operation of wireless sensors for the Internet of Things. Named one of the 100 entrepreneurs who are changing the world, Sandrine Milante, CEO of ÉcoloPharm, tackles the waste linked to the packaging and overpacking of prescription drugs, giving pharmacists eco-responsible packaging solutions.

Never Was Average co-founder Joanna Chevalier, otherwise known as Hanna Che, collaborates to create an inclusive space for BIPOC in artistic and creative fields through conversation, art exhibitions and other events – she’s one of people the behind the La vie des Noir.es counts street mural emblazoned on Sainte-Catherine Street in the summer of 2020. Co-founder and director of social entreprise Petites-Mains,  Nahid Aboumansour received the Cross for Meritorious Service (Civil Division) in 2002 from the Governor General of Canada for her commitment to the service of immigrant women in Québec. She also became in June 2021 a Knight of the Ordre de Montréal.

A distinguished business woman, former CEO of food business les Aliments Wong Wing, and named to the Ordre National du Québec, Pauline Wong continues to work for representation and equality for the Montréal Chinese community and promote intercultural connection. Named among the 25 Women of Influence of 2021, anti-racism activist Nelly Bassily is the Director of Youth Initiatives and International Relations at DAWN Canada (Disabled Women’s Network Canada), where she works to improve accessibility for young women with disabilities and Deaf young women.

As co-founder and Creative Director of award-winning bilingual magazine BESIDE, Eliane Cadieux aims to “bridge the gap between humans and nature” through authentic images and meaningful storytelling of real life experiences in the outdoors. Editor and Director of esse art magazine, the longest-running fine arts magazine in print in Québec, Sylvette Babin heralds the diversity of today’s arts in print, in conversation with the Québec and international community, and as an active artist herself.

Multidisciplinary artist Meky Ottawa creates video, illustration and installation art specific to Indigenous worlds, such as the profound mural in homage to filmmaker Alanis Obomsawin – see it at the corner of Atwater and Lincoln downtown. As co-founder of Théâtre de la Sentinelle and an actor herself, Tatiana Zinga Botao is focused on equity, giving racialized people leading roles in meaningful productions, and promoting diversity in Québec through representation and inclusion. Actor Nahéma Ricci starred in Sophie Deraspe’s 2020 Oscar-nominee Antigone and won the l’Iris de la Révélation de l’année award and Canadian Screen Award for her leading role.

Writer and academic Robyn Maynard is the in-demand author of influential book Policing Black Lives and regular commentator on racial issues in the province. Antiguan-Québecoise poet, author and spoken-word artist Tawhida Tanya Evanson has performed at literary and arts festivals around the world and recently released her novel Book of Wings with Véhicule Press. The 2019 awardee of the Writers’ Trust Fellowship for being a “leading light among Canadian writers,” Heather O’Neill recently featured in an interactive museum exhibition on literature and makes astute book recommendations with her daughter. Innu slam poet, actress, visual artist and aboriginal and environmental rights activist Natasha Kanapé Fontaine has published three critically acclaimed collections of poetry and performs worldwide.

Musician Béatrice Martin, aka Cœur de pirate, recently acquired Dare to Care Records and rebranded it as Bravo Musique, with an emphasis on inclusivity and respect for artists and their work. Creator of Montréal vogue-ball mainstay House of Barbara, singer-songwriter, performance artist and activist Elle Barbara creates music and community with a message of queer, Black, trans inclusivity. Inuit artist Elisapie Isaac connects with her heritage in an entrancing folk music of the North, sung in Inuktitut, English and French, including on her latest release in conjunction with National Indigenous Peoples Day.

Félix-award-winning pianist and composer Alexandra Strélinski has become one of the foremost stars in modern classical music with her minimalist and cinematic compositions. Inspired by soul and jazz music icons of the ‘40s to ‘60s, Dominique Fils-Aimé won the 2020 Félix award for Jazz Album of the Year and the JUNO award for Vocal Jazz Album of the Year for her album Stay Tuned!

The principal of the Tastet food and restaurant website, Élise Tastet encourages discovery of all things food-related in and around Montréal, featuring over 1,000 restaurants as well as profiles of chefs, recipes and best-of lists. Many a Montrealer surely spent at least part of 2020 cooking with Dyan Solomon – the famed chef and co-owner of restaurants Olive + Gourmando, Foxy and Un Po' di Più  launched Olive + Gourmando: The Cookbook right before Christmas 2019. Enthusiasts of African culture and gastronomy, Le Virunga restaurant owners Maria-José and Zoya de Frias bring the heat and flavours of sub-Saharan African dishes to the Plateau.

Youthful brand Esser was founded by Marie-Christine Fortier on a foundation of authenticity and accessibility, with a commitment to ethical and sustainable products. Entrepreneur, curator and content creator Josiane Konaté launched online boutique Maison Petite & Bold, offering vibrant ethnic goods made in Africa. And Marie-Ève Lecavalier won the Festival d'Hyères prize for her nostalgic, psychedelic ‘60s-and-‘70s-inspired women’s wear – the recent collections on her LECAVALIER label are just as dreamy and wild.