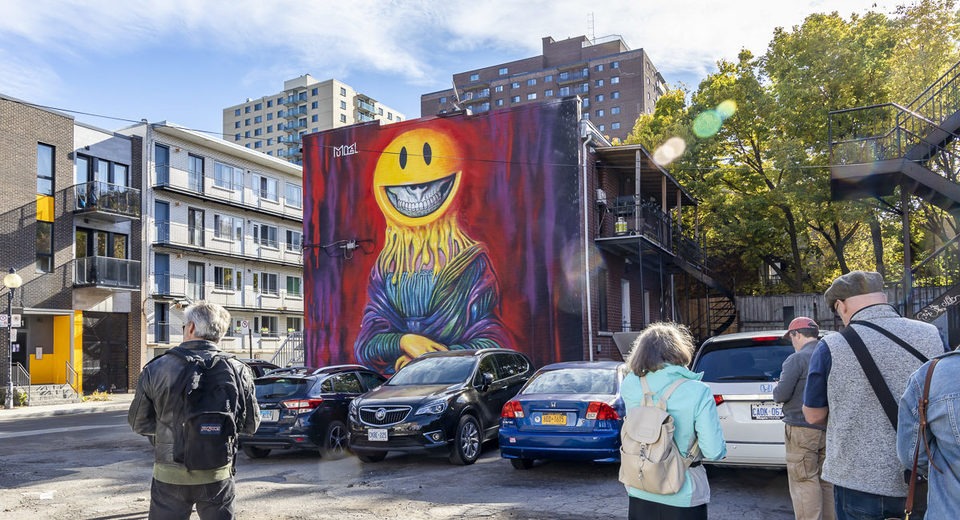 6 Montréal murals to get you in the Halloween mood

Graffiti, murals and street art are part of an ever-evolving game. There is no shortage of artwork in Montréal, the country’s leader in the street art scene. These works come and go and are replaced or covered daily – they sometimes exist longer online than in real life. Check out these six examples of street art to get you in the mood for Halloween. All artists sell their art in some form or other and if you are using it as a background for your new profile pic don’t forget to tag them!

Ron is an American artist with few remaining murals worldwide. The Melting Mona Grin is the perfect mash up of high and low cultural touchstones. He has been in the game for a long time, messing up billboards and going after Joe Camel and Ronald McDonald to name a few. His kids could today be his inspiration for his satirical toys sold as part of his PoPaganda collection. This piece is scary as hell come nightfall and is found in the Saint-Laurent Boulevard parking lot just south of Prince-Arthur Street.

Zen is a Montréal graffiti artist, illustrator, sci-fi fan and proud papa. He has been hitting the streets for a while with local crews and has worked with big international brands like Nike and bands like Slayer and Guns N’ Roses. This Dr. Doom supervillain piece, a perfect Halloween costume option, can be found on Marie-Anne Street just east of Rivard Street. Big respect for framing the “Keep the Alleyway Clean” sign and giving love to his wife and kids by tagging them in his works.

Created by Montréal artist Dré, Earth Crusher is into making big and quick profits, loves deforestation and the tobacco trade and represents today’s political leaders and finance bros. Screw sustainability! His works are found all over the city. He works with A’Shop, has repped at Under Pressure and the MURAL Festival, and has some cool collaborations with local artist Five 8 here and there. This creepy piece on Saint-Mathieu Street in Shaughnessy Village screams horror. I call it the park creeper.

Carnior’s works have been popping up all over the city. He is an anonymous stencil artist whose pieces call for reflection and self-criticism. Pointing fun at the toxic masculinity within the American Republican Party, this one displays the love affair with Fox News correspondent, conspiracy theorist and pro-Trump main man Sean Hannity. It can be found off de L'Abord-à-Plouffe Street in Cartierville. Halloween aside, kissing The Donald gives me nightmares.

Along a pedestrian section of Gilford Street, Greek artist Insane 51 was invited to perform on a large wall during last year’s MURAL Festival. This young artist works in a double exposure and 3D style. With some stereoscopic glasses the skeleton portion of the artwork within the Eros & Pysche mural comes to life!

Flavor is a Montréal artist who works with graffiti, sculpture, stencil and installations across Montréal. His name is inspired from the smoothie stand he worked at when younger and its daily flavour option. His most fond childhood memories were post-swim meets where, win or lose, you were entitled to enjoy a popsicle with your friends. His wooden popsicle installations are spread out and placed in random areas across the city creating a sort of treasure hunt. There are a bunch along the alleys west of Saint-Laurent Boulevard and south of Duluth Avenue for those with a sweet tooth.