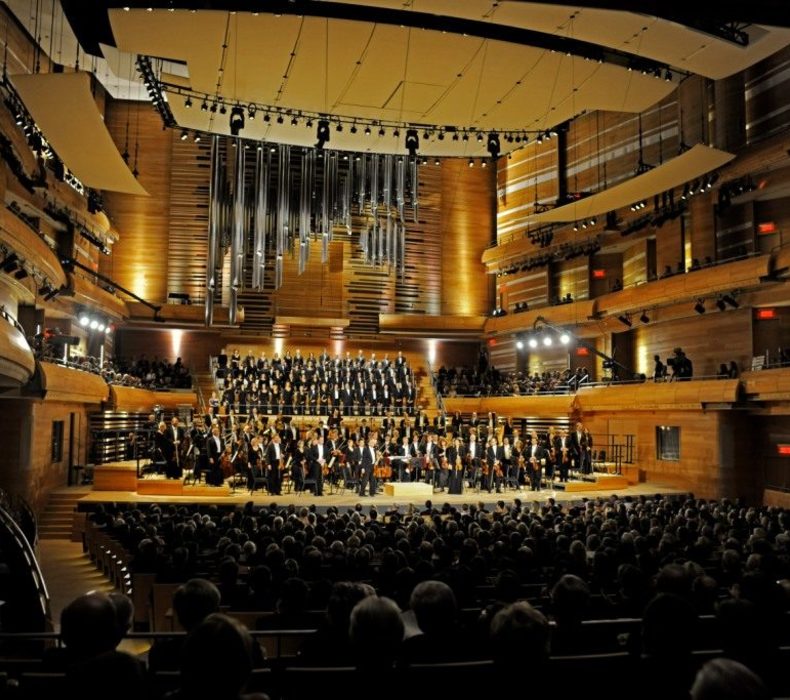 Opera, ballet and classical music lovers have a wealth of choices as international stars will grace Montréal’s finest stages in fall and winter 2018.

The McGill Chamber Orchestra opens its 79th season with They Shoot! He Scores!, showcasing the music of film composer François Dompierre, who composed music for The Decline of the American Empire, Jesus of Montréal and many other movies. Dompierre’s evocative scores dominated Québec cinema in the 1980s. Dompierre will animate this concert on September 22 at the gorgeous Bourgie Hall downtown.

The MCO season continues with Vivaldi, Bach & Julie Boulianne on November 27 when renowned Québec coloratura mezzo-soprano Julie Boulianne – who has performed in the world’s greatest opera houses, including the Metropolitan Opera – performs baroque arias at Saint-Jean-Baptiste Church as part of the Montréal Bach Festival.

The Opéra de Montréal continues its 2017-2018 season with Wagner’s masterful Das Rheingold at Salle Wilfrid-Pelletier on November 10, 13, 15 and 17.

Das Rheingold, the first part of Wagner’s tetralogy, is a true parable of the history of the world and was a source of inspiration for The Lord of the Rings. Bewitching music sung by mythical creatures makes for a total experience in a world in which gods, humans and giants cross paths. The superb cast includes American bass-baritone Ryan McKinny and Canadian bass-baritone Nathan Berg. Running time: 2 hours and 30 minutes with no intermission.

Opera McGill showcases the outstanding professional-calibre work of McGill University students and will present three performances of Albert Herring, a three-act chamber opera by Benjamin Britten, at Pollack Hall from November 8 to 10.

A night at the symphony

In his 13th year at the helm of the OSM, which is marking its 85th season, Nagano conducts Dvořák, Schubert and Schumann for three performances at the Maison symphonique de Montréal on November 29 and 30. Each concert consists of Dvořák’s Seventh Symphony alongside Schubert’s Die Zauberharfe overture. On the same program, German pianist Martin Helmchen will play Schumann’s Piano Concerto.

Other OSM highlights include Halloween Atmospheres with guest conductor François-Xavier Roth, performing Ligeti’s Atmosphères, Dukas’ The Sorcerer’s Apprentice and Liszt’s Totentanz, or Dance of the Dead, at the Maison symphonique on October 31 and November 1.

And the OSM celebrates the holiday season with the hugely popular Les jours de la Semelle (December 12 to 15) and their blockbuster Handel’s Messiah (December 18), both at the Maison symphonique.

Over at the Orchestre Métropolitain, maestro Yannick Nézet-Séguin conducts Viva Verdi with powerhouse Russian bass-baritone Ildar Abdrazakov – who has wowed audiences from the Metropolitan Opera and Saint Petersburg’s Mariinsky Theatre to the Opéra Bastille in Paris –  singing Verdi’s greatest arias on October 28 at the Maison symphonique.

Other OM hightlights include A Shakespearian Night’s Dream with guest conductor Alexander Shelley on December 6, and En toute complicité with daring French classical pianist Hélène Grimaud on December 21, at the Maison symphonique.

The I Musici de Montréal chamber orchestra launches its 35th season with its Portraits of Women concert, featuring a stellar cast of female classical singers and a choir performing excerpts of works by everybody from Strauss to Puccini, at the Maison symphonique on October 21.

The glorious Church of St. Andrew and St. Paul – whose Gothic Revival architecture looks like it comes straight out of Robin Hood – presents its hugely popular Carols by Candlelight concert with the A&P Choir under the direction of Jean-Sébastien Vallée on December 16. The church also hosts its annual benefit concert – featuring the A&P Choir and musicians from the Orchestre Symphonique de Montréal performing their Gender-Bending Messiah concert – for the Maison du Parc, one of Montréal’s last hospices for men and women stricken with HIV/AIDS, on November 23. Then, on December 9, the church hosts the much-beloved 39th annual CBC Christmas Sing-in, which is broadcast live across Canada.

Les Grands Ballets Canadiens de Montréal’s timeless adaptation of The Nutcracker by Québec choreographer Fernand Nault returns to Salle Wilfrid-Pelletier for its 55th year. This two-act ballet based on E.T.A. Hoffmann’s classic tale is set to the music of Tchaikovsky and brings together more than 60 dancers and 100 extras, plus the Orchestre des Grands ballets Canadiens de Montréal under the baton of conductor Dina Gilbert. If you have never seen it, this famed production is a must. The Nutcracker runs from December 13 to 30.