Since its construction for the 1976 Summer Olympic Games, Montréal's Olympic Park has transformed from a historical site into an international hub for major sports and cultural events – not to mention the 80-kilometre views in every direction from the iconic Montréal Tower.

360° city views and a rich history

One of Montréal's most famous icons and one of the best places to see Montréal from above, the Montréal Tower stretches 165 metres (541 feet) towards the sky at a 45-degree angle, making it the world's tallest inclined tower. Ride the glass elevator – big enough to be called a “funicular,” in fact – to the observatory at the top to see incredible panoramic views of the city, Mount Royal and the St. Lawrence River. Glimpse local history while there too: the Since 1976 exhibiton features artifacts, photos, video archives and interactive digital content about how the stadium and tower were designed and built and how they forever changed the landscape of the city. While there, have coffee, cocktails or a snack with a panoramic view at MTL Bistro and take an audio tour around Olympic Park (get the code for the free app at the Montréal Tower ticket booth).

Designed by French architect Roger Taillibert as the Summer Olympic's main venue, the Olympic Stadium was made to be spectacularly massive. Known by locals as “The Big O” – named for both the Olympics and the circular shape of its bright white roof – the stadium and the adjacent Sports Centre host major events, from Toronto Blue Jays MLB games and spring training, FINA World Diving Series and special Montréal Impact Major League Soccer games to trade shows, rock concerts and monster truck rallies. The Sports Centre also features brightly lit, regulation-sized Olympic pools and a fitness centre open daily to the public. Outside the Sports Centre, take a photo at Place Nadia-Comaneci, featuring a 3D representation of the Olympic rings and an Olympic flag. Save on your entrance to the Tower and guided stadium tours with Passeport MTL, which also includes entrance to the nearby Space for Life's Montréal Botanical Garden and Rio Tinto Alcan Planetarium.

Outside the stadium's doors, you'll find the Esplanade of the Olympic Park, a huge outdoor space. Now it's a hotbed of year-round activities. On the first Friday of every month from May through October, eat great food in the open air at First Fridays, featuring 50 of the city's gourmet food trucks, music and family-friendly activities on the colourful Esplanade terrasse. From June to October, explore the eco-responsible flower and vegetable gardens of Les Jardineries, enjoy a woodfire pizza and a drink, see a band and even learn to salsa every Sunday night at Fiesta Olympica on the illuminated terrasse. If you're there at lunch hour in the summer, look for Halte 76, hosting different food trucks every week. And if you're a skateboarder, try the Esplanade's new Vans skatepark. Also see outdoor concerts by the Orchestre symphonique de Montréal as part of its annual OSM Classical Spree festival in August. 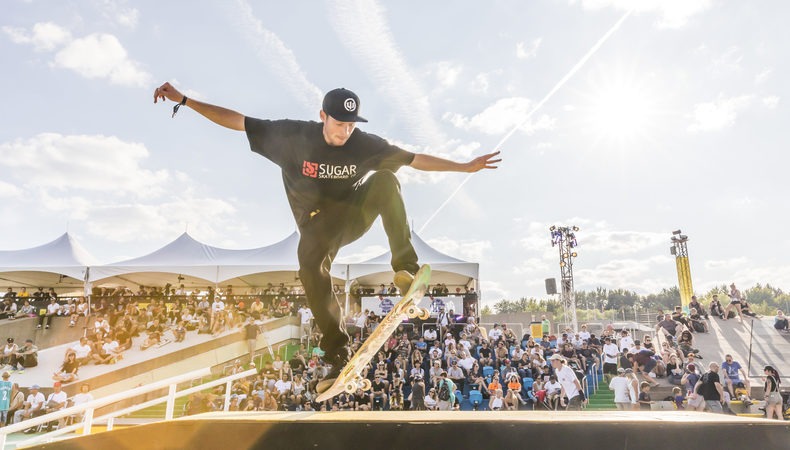 If you're into action sports, JACKALOPE has you covered in mid-August, with competitions by star athletes, demos and lessons in skateboarding, base jumping, rock climbing, fixed gear cycling, BMX, and more for all ages – a bonus: kids 10 years and under get in to JACKALOPE for free. Its winter equivalent, BARBEGAZI, gets everyone outdoors in January to try snow skating, fat biking and more and participate in a winter obstacle race and other activities. By February, the Esplanade transforms again, adding an ice rink and family-friendly activities.