One of Montréal's biggest and most picturesque parks just got a makeover. While Parc Jean-Drapeau now has even better capacity to host major summer and winter festivals, its rejuvenated green spaces, riverfront and permanent attractions offer a year-round getaway just across the river from Old Montréal.

No stranger to being a must-see destination, Parc Jean-Drapeau was home to a British fort (now a history museum) before becoming a park in 1874. It doubled in size for international event Expo 67, stretching to over 268 hectares on two islands: designers added land to Saint Helen’s Island’s two ends and built Notre Dame Island from rock excavated while building the city's underground metro system. At the same time, the city renamed Parc Jean-Drapeau after a late mayor and made the park accessible to all by extending the metro under the St. Lawrence River. Today, vestiges of Expo 67 remain throughout the park alongside brand-new attractions such as Espace 67, a contemporary gathering site just steps from the metro station and strongly inspired by the welcoming global spirit of Expo 67.

With panoramic views of the river and Old Montréal from a renewed central concourse, Parc Jean Drapeau boasts over 25 kilometres of walking and biking trails, sunny Jean-Doré Beach, an Olympic-size pool and race track Circuit Gilles-Villeneuve for recreation. Several works of public art, including Alexander Calder's iconic and massive sculpture Three Discs (Man), and gorgeous flower gardens showcase Montréal's artistic side, while the Biosphère environment museum (housed within a Buckminster Fuller-designed geodesic dome), and the Casino de Montréal and La Ronde amusement park live to entertain us! A new event village provides space for year-round activities, agora area lawns welcome picnickers, and there's more to satisfy your hunger at a new food court and restaurant. The park's riverside walkway also gets a revamp for 2019 yet maintains its natural quietude next to the fast-moving St. Lawrence River. 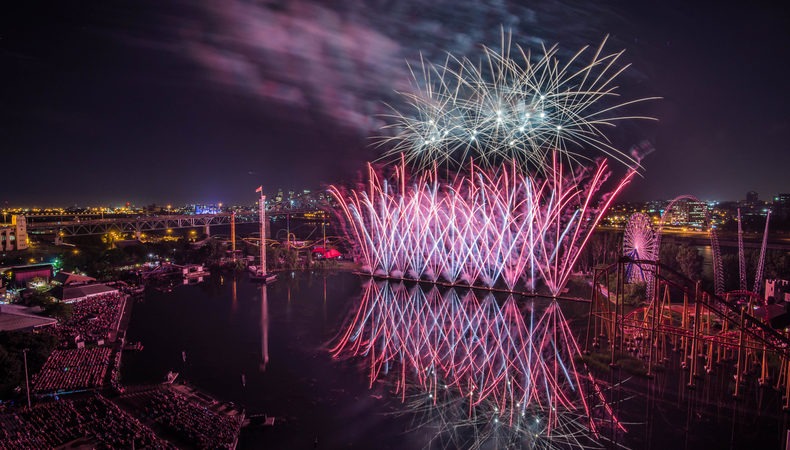 Montréal's distinct cultural mix gets us into the groove at Week-ends du monde during the height of summer. The skies light up around the park for several summer nights of fireworks competition L'International des Feux Loto Québec. In June, engines rev and crowds cheer for the Formula 1 Grand Prix du Canada at Circuit Gilles-Villeneuve on Notre Dame Island: the new Espace Paddock offers a prestige-level way to watch the Grand Prix, with two grand terraces and new grandstands, as well as a multi-function hall for year-round events. And if you're here on June 27, celebrate the inauguration of Espace 67 with a classical music concert by the Orchestre Métropolitain. On the cusp of a new decade, Parc Jean-Drapeau balances contemporary redesign touches with the nature and entertainment it's always been known for.