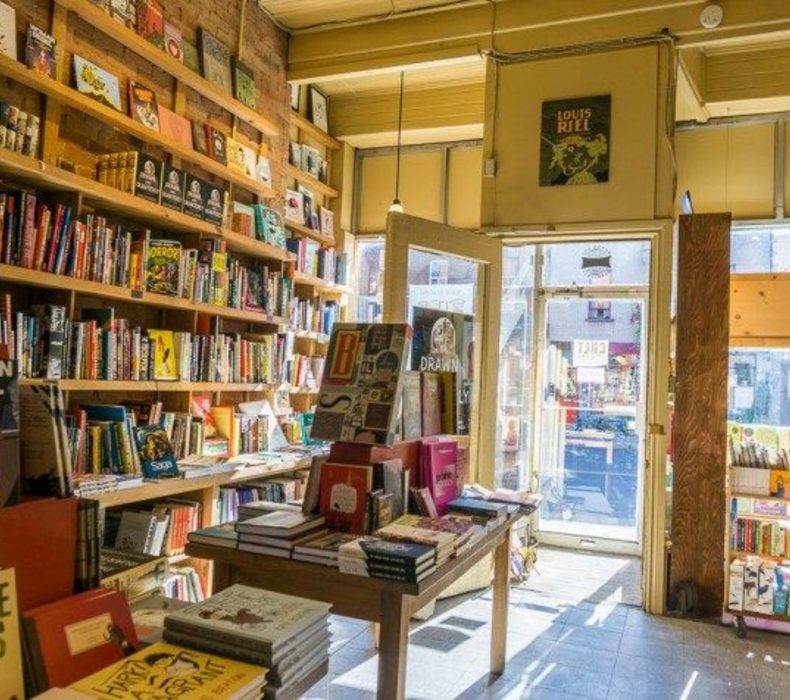 Reading a book is an excellent remedy for so many things. Escaping the daily grind. Healing the heart. Feeding the imagination. Lucky for bibliophiles, Montréal has a goldmine of little independent bookstores that are great for a gander of hot-off-the-presses, literary classics, graphic novels, comic books and hard-to-find gems. Some sell new, some sell used, but all are worth a browse and then some. Happy hunting.

Go for the graphic novels

Nestled in the hip Mile End, Drawn & Quarterly, the storefront, is the extension of the company of the same name, which evolved from a single-issue magazine to a renowned publisher of the world's best cartoonists. This kicky store sells awesome graphic novels, comic books, art books and more, plus, it regularly hosts book launches for local authors, literary events and workshops.

A fixture of the McGill ghetto since 1975, this beloved book haunt sells secondhand books specializing in literature, philosophy, poetry and other interests. Housed in a 19th-century brick house, The Word is like walking into a bookworm’s overstuffed living room, with a vibe that radiates erudite cool. Find what you’re looking for, and what you weren’t, in stacks piled high all over.

A hub for anglo literature

One of the city’s oldest retail bookstores (it opened in 1966), Argo Bookshop is another tiny little spot crammed with untold treasures. For the anglo reader downtown, it’s a definite go-to, with literature, literary theory and criticism, philosophy, religion, environmentalism, children’s literature and more to choose from. They also have an online catalogue, so you can check for new goodies and titles that are coming soon, plus search their database of books in stock and available for ordering.

A literary landmark that’s been around since 1984, S.W. Welch is located in the Mile End district on St-Viateur Street W. (right near the bagels!). Another smallish space stacked with good reads, it specializes in used and antiquarian books in a diverse number of fields. Open 7 days a week and into the evening, it’s an ideal spot for burrowing in a book and blotting out the world.

Browse to the beat

At the heart of downtown in an old greystone, Cheap Thrills advertises as a veteran record store, i.e. vinyls and CDs, with leanings toward jazz, avant garde, experimental and blues. But it makes the cut because the less-advertised part is that it also sells used books. Climb the crazy tilting stairs to a world crammed with great titles and groovy tunes. 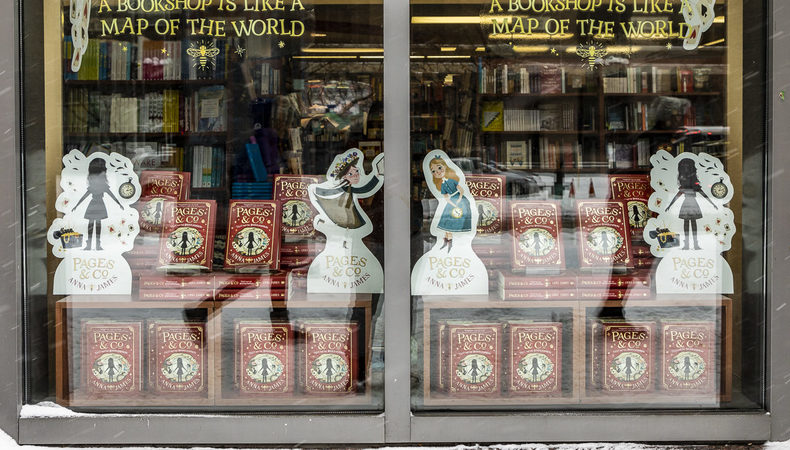 It starts with a paragraph

Another mainstay of downtown’s literary offerings, Paragraphe is located right on McGill College Avenue, across the street from the McGill University campus. In business since 1981, Paragraphe caters to general interest, stocking over 50,000 titles, of which 10,000 are children’s books. It also features regular literary events and author appearances. Bonus: there’s a Second Cup right next door.

Foodies, feast your eyes on this: a bookstore devoted to cookbooks and food-related literature. Drool over page upon glossy page that detail delicious recipes, culinary techniques and the wide world of cuisines. Appetite for Books also offers cooking classes based on a selection of cookbooks, features event nights with invited chefs and authors and offers private cooking classes for you and 10 of your friends (BYOB format).

I am woman, hear me read!

While the focus is on women’s literature – whether novels, poetry, comics, essays or children’s books – you can also find feminist, queer, lesbian, gay, bisexual, trans, intersexual, asexual, agender picks and more at this Centre-sud bookstore. But there’s more than just books because L'Euguélionne organizes workshops, launches, reading circles and conferences, plus you can browse magazines, posters, cards and stickers crafted by Montréal artists and grab a cup of tea or java.

From rebooted Archie to the Avengers and a whole lot in between, this downtown bookstore has a massive comic book selection, plus used books, videos, CDs and cards (Magic The Gathering, hockey and baseball) to choose from. Take your time browsing the shelves and bins; Librairie Astro’s unfussy and unhurried approach creates the perfect ambiance for at-length perusing.

With everything art to zoology on their shelves, and fiction and non-fiction, you can spend hours inside the stone walls of this cozy nook flipping through titles. True blue bibliophiles and bookworms in the making will love the wide range of selections and Librairie Bertrand’s romantic setting.

This gem of a bookstore in Verdun buys and sells books in both French and English, plus for music lovers it’s got an excellent selection of vinyls that span the musical spectrum. Wee ones will also find what they are looking for at Les Bons Débarras because there is a special section devoted to little readers.

From the hottest fiction titles to school and university textbooks, this Montréal West bookstore has been keeping readers coming back for the past 60 years. Bonder Bookstore also carries a wide range of titles for tots and teens, so a trip here can easily be a family affair. 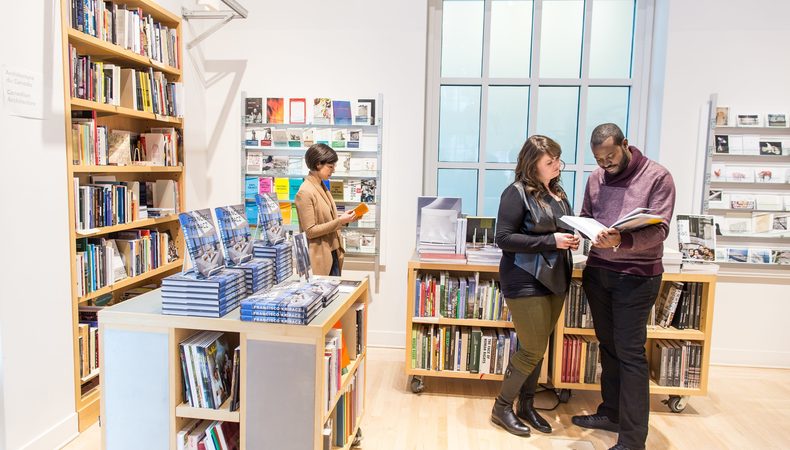 This sleek and airy space shines the spotlight on the theory, history and practice of architecture as well as urban planning, but that’s just some of the carefully-curated selection at the CCA bookstore. Green thumbs can leaf through books on landscape and garden history, photo buffs can zoom in on photography, and if you fawn over fonts, you’ll even find books on typography. Lots of cool coffee table material here!

Looking for a comic book? With its impressive list of mainstream North American titles, plus international and independent magazines, chances are Crossover Comics has got it. If you’re new to the comic book scene, the knowledgeable staff can steer you in the right direction. And while comic mavens keep coming back for its fresh and exciting inventory, this upbeat boutique offers more, including apparel, collectibles and board games.

The bright turquoise trim will catch your eye, but it’s goods on display at this cool NDG bookstore that will draw you in: books of all kinds, records, CDs, DVDs, prints, high-end buttons and select artisanal items. At Encore Books and Records, the floor-to-ceiling shelves are crammed with treasures just waiting to be unearthed. 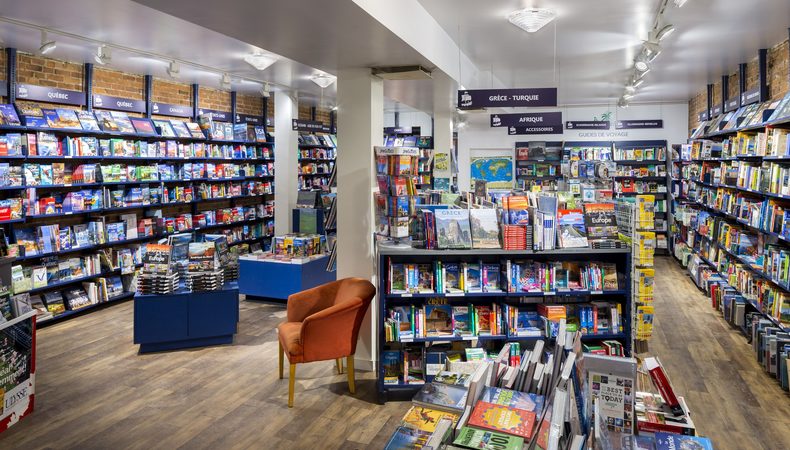 To get a feel for Montréal and its surroundings, pop by Ulysses for travel books in both paper and digital format. The two bookstores—one on St. Denis Street on the Plateau and one on President-Kennedy Avenue downtown—carry guide books that give you an in-depth look at the city, whether you’re interested in exploring its creative cultural side, religious heritage or vibrant boroughs and their “must-sees” and attractions. How about a quick getaway? Find inspiration while flipping through guides on the regions of Québec, or even Ontario and the United States. And don’t forget to pick up a book of Québécois expressions while you are here so you can charm the locals with a phrase or two. Literature for little globetrotters is also available.