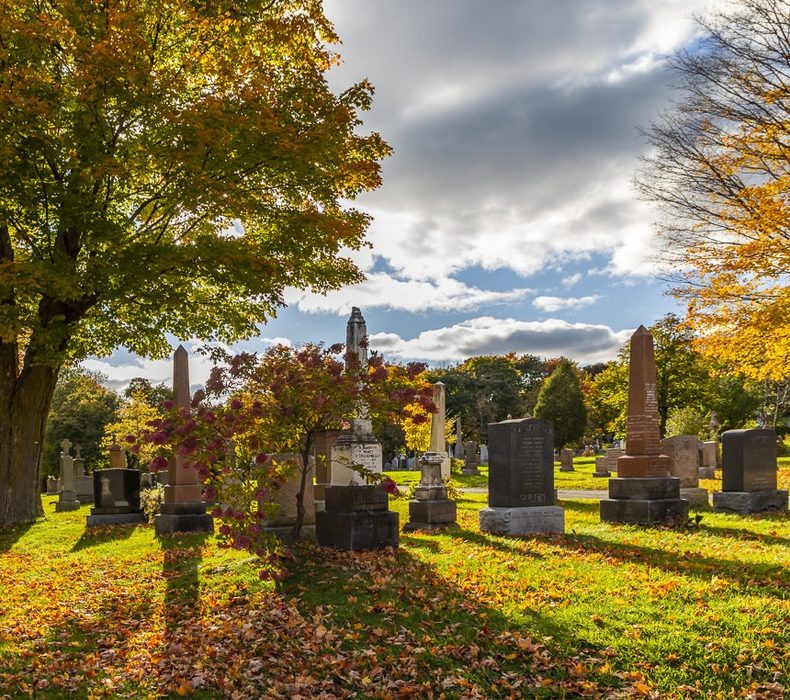 Located in the heart of Montréal, the beloved and iconic Mount Royal is home to the picturesque Mount Royal Cemetery, a quiet escape from the urban jungle where visitors can enjoy a peaceful walk and learn some history at the same time. 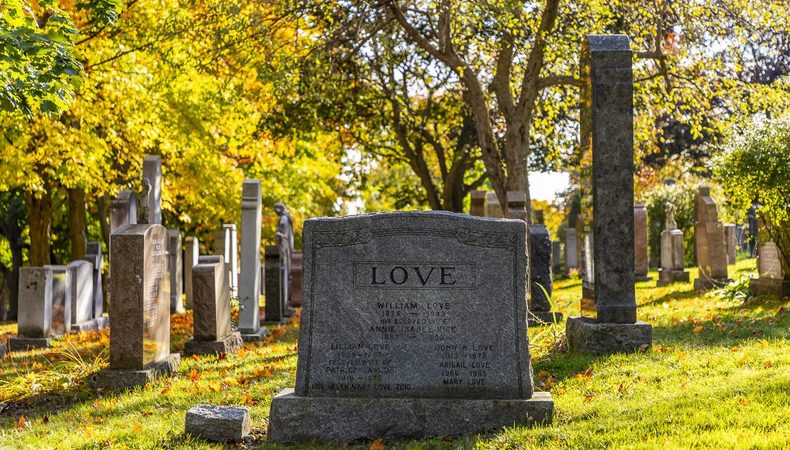 The slopes of Mount Royal

Montrealers have buried their dead on Mount Royal since the 165-acre (66 hectares) Mount Royal Cemetery – with its magnificent terraced landscapes filled with beautiful trees, shrubs and flowers – opened in 1852. Originally founded by Protestant denominations, the cemetery today is non-denominational and includes the Reform Judaism burial ground Temple Emanu-El Cemetery.

Mount Royal Cemetery is bordered by the largest cemetery in Canada, the Catholic cemetery Notre-Dame-des-Neiges, established in 1854 and inspired by the Cimetière du Père-Lachaise in Paris; as well as by the Shearith Israel Cemetery (founded in 1854) and the Shaar Hashomayim Cemetery (1863) on the northern slope of Mount Royal where poet, Rock and Roll Hall of Famer and Montréal icon Leonard Cohen is buried.

The first crematorium in Canada was built on the eastern side of the Mount Royal Cemetery in 1901 by architect Sir Andrew Taylor, with Montréal limestone and funds donated by tobacco tycoon and philanthropist Sir William Christopher Macdonald. In 1862, the cemetery’s entrance gates were built in the Early English style of architecture, and the Historic Sites and Monuments Board of Canada designated Mount Royal Cemetery as a National Historic Site in 1998.

The first person buried in Mount Royal Cemetery was the Reverend William Squire, on October 19, 1852.

The most impressive funeral in Mount Royal Cemetery was that of Sir Arthur William Currie, Commander of Canadian Troops during World War 1 and Principal of McGill University from 1920 to 1933. His 1933 funeral procession began at the McGill Campus and drew 20,000 people.

Others buried here include Indian-born British travel writer, educator and social activist Anna Leonowens, who was the governess Anna in Anna and the King of Siam and The King and I; literary icon Mordecai Richler and famed mystery writer Frank L. Packard; painter Anne Savage, founding member of the Canadian Group of Painters; beloved 19th-century Old Port tavern owner, inn keeper and philanthropist Joe Beef (a.k.a. Charles McKiernan); and legendary photographer William Notman, whose portrait of Buffalo Bill and Sitting Bull – taken in Notman’s Montréal studio in August 1885 – is arguably the most famous photo of the myth of the American Wild West.

Historical burials include Montréal Canadiens and Hall of Fame hockey player Howie Morenz, whose March 11, 1937, funeral was held in the Montreal Forum where he laid-in-state at centre ice while 50,000 Montrealers paid their respects; and Grand Trunk Railway president Charles Melville Hays, who perished aboard the Titanic, whose body was found by a rescue boat and identified by his gold watch that had his name engraved on it. Hays was buried on May 8, 1912, more than three weeks after the Titanic sank in the North Atlantic Ocean in the early morning hours of April 15.

Oasis in the city

The Mount Royal Cemetery is not offering guided tours during the COVID-19 pandemic, but recreational visitors can visit the cemetery if they respect social distancing guidelines.