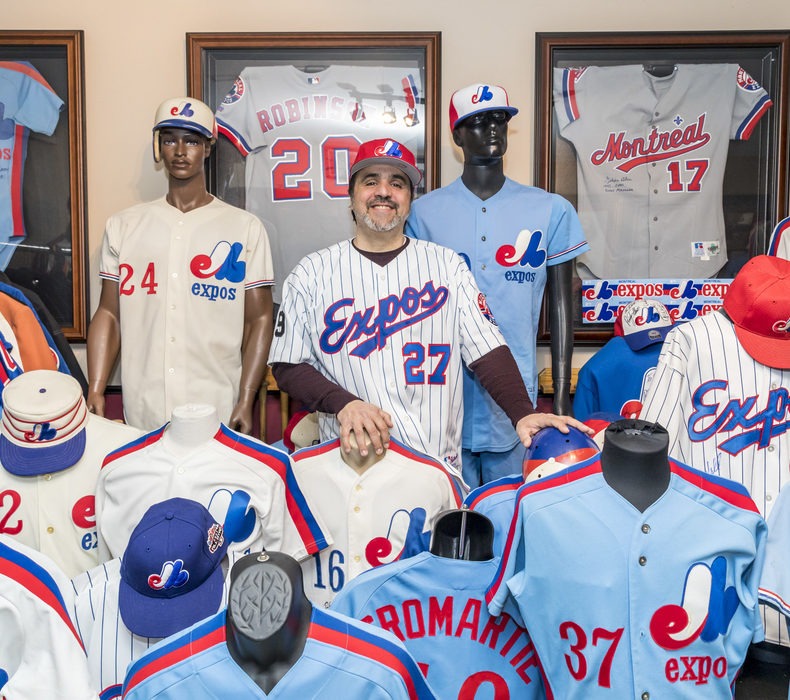 Montréal Expos diehard baseball fan Perry Giannias started collecting Expos memorabilia when the fabled Major League Baseball team played its final season in Montréal in 2004. Today, his is “the biggest private collection of Expos memorabilia in the world.” The eye-popping collection features more than 1,000 items, everything from a ticket to an Expos inaugural 1969 season game to jerseys worn by 2018 National Baseball Hall of Fame inductee Vladimir Guerrero.

Giannias’ collection also features other baseball memorabilia, notably items dating back to the iconic Montréal Royals baseball team. He has also loaned many items to various institutions, such as the Grévin Montréal wax museum and the National Baseball Hall of Fame and Museum in Cooperstown, New York.

“I started collecting stuff because who else was going to do it? Who else was going to preserve all of this history?” says Giannias, who also organizes the annual all-star Expos Fest Celebrity Gala, when former Expos greats return to Montréal to raise money for the Kat D DIPG Foundation at the Montréal Children’s Hospital.

Here are some highlights from the collection, as well as some fun and quirky facts about the Expos, the first Major League Baseball franchise located outside the United States, and lovingly called “Nos Amours” by Montrealers. The team was named after the Expo 67 World’s Fair, debuted in 1969 and played 36 seasons in Montréal before relocating to Washington, DC, (as the Nationals) following the 2004 season. 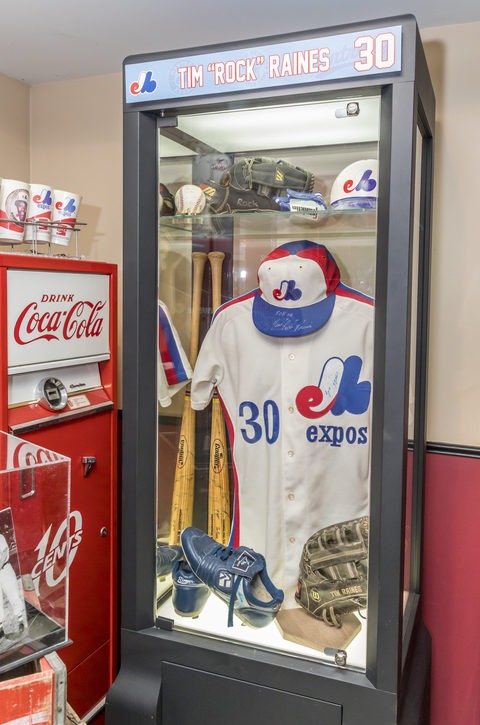 Outfielder and four times National League stolen base leader, Tim Raines was inducted as a Montréal Expo into the National Baseball Hall of Fame in 2017. About his time in Montréal, Raines told me, “I remember every bit of it. I’m proud to have been a Montréal Expo.” Giannias says, “My Tim Raines 1981 official rookie jersey is on display in National Baseball Hall of Fame, but this jersey dates to 1980. I love when my items are displayed in museums and exhibitions because what’s the point of having a collection if people can’t see it?” 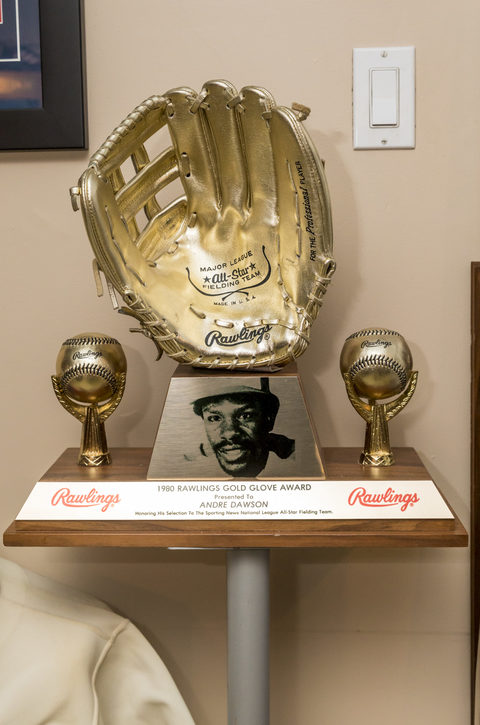 The Rawlings Gold Glove Award presented to outfielder André Dawson – nicknamed “The Hawk” – who was inducted as a Montréal Expo into the National Baseball Hall of Fame in 2010. “I bought this for $4,000, but today it is worth three of four times that,” says Giannias. 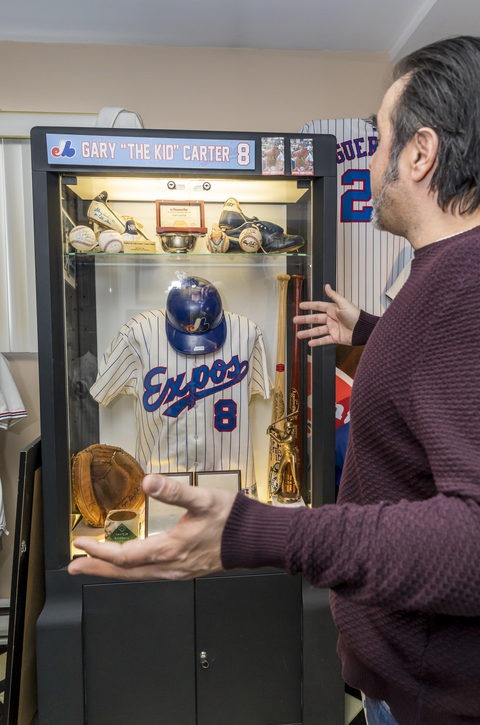 Giannias’ collection features many priceless items from Montréal icon Gary Carter – nicknamed “The Kid” – who was inducted into the National Baseball Hall of Fame as a Montréal Expo in 2003, notably the outfit Carter wore in his final major league game, in Montréal on September 27, 1992. Fittingly, in his very last at-bat, Carter hit a two-out double just over the head of his longtime teammate and friend Andre Dawson to drive in the only run in the Expos' 1-0 win. Watch the clip below to see 41,802 ecstatic Expos fans explode with joy. 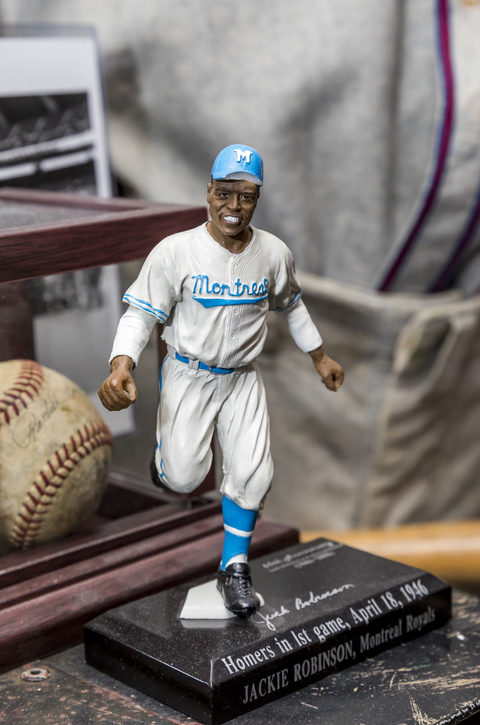 The Montréal Royals were a minor league professional baseball team from 1897 to 1960, and were the Brooklyn Dodgers top farm club (Class AAA) from 1939. This miniature statue is of Black civil rights icon Jackie Robinson who broke professional baseball’s colour barrier with the Royals in 1946 before playing for the Dodgers in 1947. In his first game for the Royals, Robinson hit a home run and immediately became a hometown hero. Jackie Robinson once said of Montréal, “I don’t care if I ever get to the majors, I told myself this is the city for me, this is paradise.” Giannias’ collection also features Royals-era baseballs signed by Robinson. 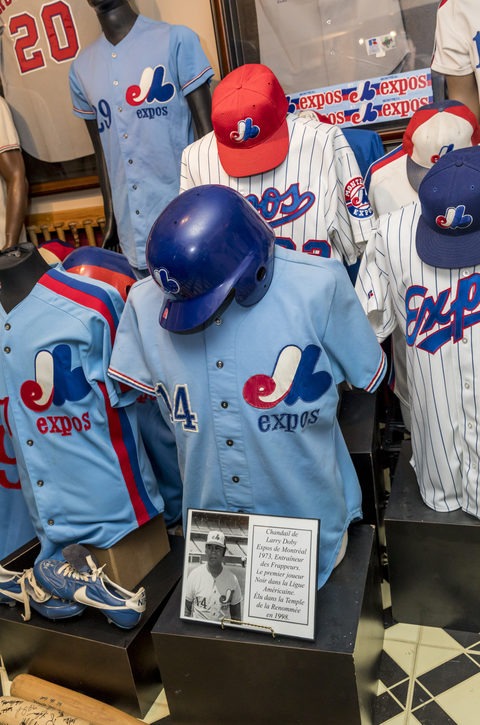 After Jackie Robinson, National Baseball Hall of Fame inductee Larry Doby was the second African-American to play Major League Baseball and the first in the American League. This is his Number 14 jersey when the Expos gave him his first coaching job. After retiring as a player, Doby became a scout with the Expos in 1969 and served as a minor league instructor with the organization in 1970. He was batting coach under manager Gene Mauch from 1971 to 1973 and again in 1976. 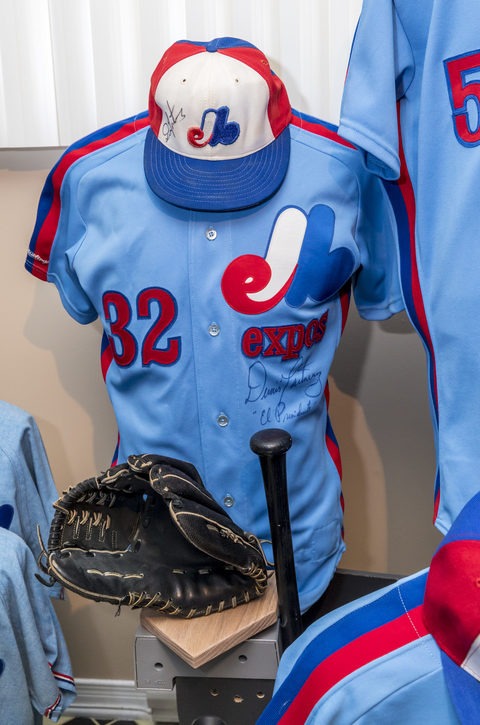 The Expos hired and promoted many trailblazers and pioneers over the years:  Felipe Alou became the team's field manager in 1992 as well as Major League Baseball's first Dominican-born manager, and legendary starting pitcher Dennis Martinez was the first Nicaraguan baseball player to play in the majors. Martinez was also the first Latin American-born pitcher to pitch a perfect game when he pitched the 13th perfect game in Major League history, on July 28, 1991, against the Los Angeles Dodgers. This autographed Expos jersey was worn by Martinez – who was nicknamed “El Presidente” – during his history-making 1991 season. 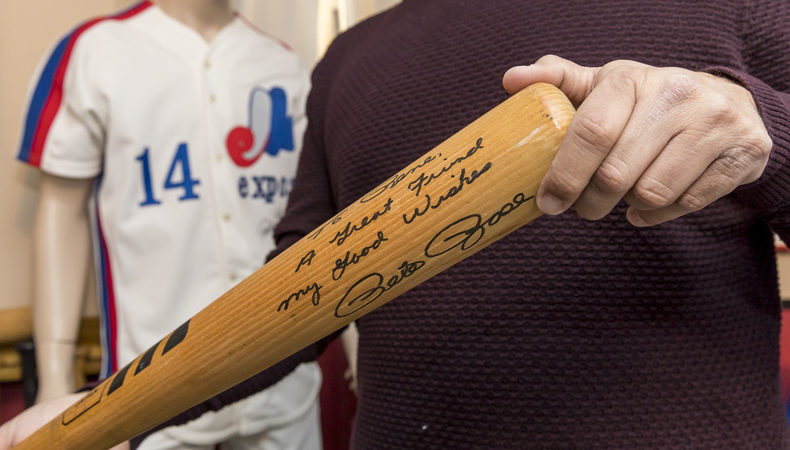 This bat was signed by baseball icon Pete Rose when he played for the Expos in 1984, the year Rose got his 4000th career hit to join Ty Cobb in the exclusive 4000-hit club. “I think this is also the last bat he used as a Montréal Expo,” says Giannias. 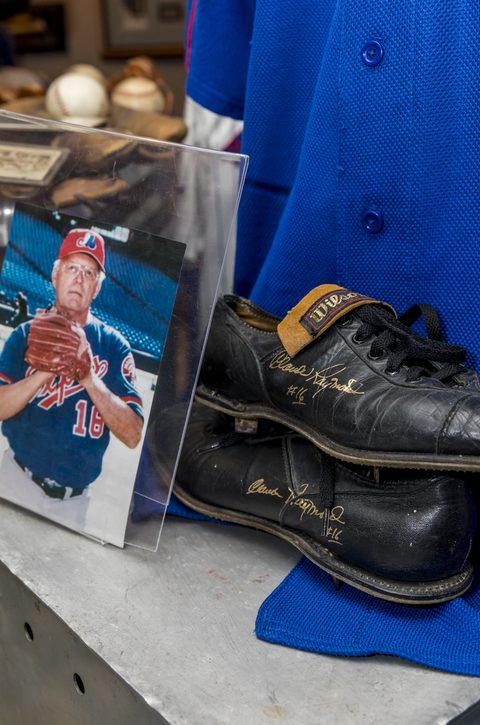 Born in Saint-Jean-sur-Richelieu, Québec, Claude Raymond pitched for the Expos from 1969 to 1971, then worked as a French-language Expos broadcaster from 1972 to 2001. He joined the Expos staff as a Roving Coach in 2002 before becoming an Expos English-language broadcaster in 2004, the team’s final season in Montréal. This is a picture of Raymond’s cleats from when the beloved Québec baseball icon pitched for the Expos. 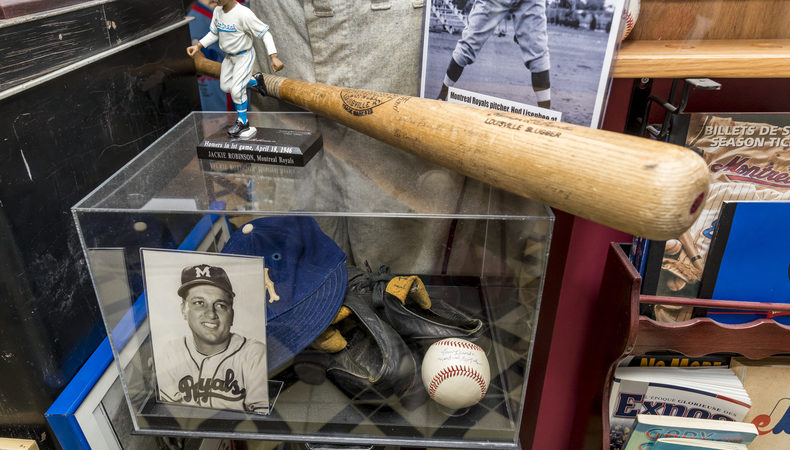 The Montréal Royals baseball cap and cleats of baseball icon Tommy Lasorda. In his final appearance with the Royals in 1960, struggling against the Buffalo Bisons, the lefty starting pitcher loaded the bases with nobody out. Royals manager Clay Bryant wanted to yank Lasorda, but 33-year-old Lasorda ignored Bryant and instead gazed up at the sky and prayed for something – anything – to get him out of the jam. As Lasorda told me, "I looked up and said, ‘I never asked you to get me out of a jam before but I’m askin’ you now.’ Billy William the ump says, ‘Come on!’ And I said, ‘Wait a second, I’m talkin’ to God!’" As described by the Canadian Baseball Hall of Fame, what happened next was something of a miracle: "The next batter hit a line drive that caromed off third baseman George Risley’s glove into the mitt of the diving shortstop Jerry Snyder’s glove. Snyder flipped it to second and it was relayed to first to nail a pair of stray runners. Lasorda’s last pitch with the Royals resulted in a bases loaded triple play!" Incidentally, Lasorda’s nickname "Walkie-Talkie" Lasorda was coined by Montréal Star sportswriter Al Parsley "because I did a lot of hollering!" 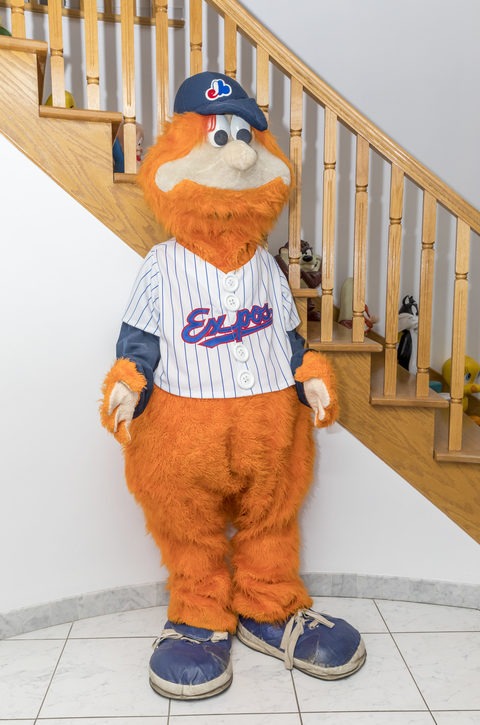 The Montréal Expos beloved mascot Youppi! was designed by Bonnie Erickson, who also designed Miss Piggy and other Muppet characters for Jim Henson. “He was inspired by Expos great Rusty Staub, who was nicknamed ‘Le Grand Orange,” Giannias explains, pointing out this final Youppi! was made for the Expos in 2004. “When you talk about the history of baseball mascots, there are just three that everybody knows: The Phillie Phanatic, the San Diego Chicken and Youppi! They were the best.”

Youppi! was also the first mascot to be thrown out of a Major League Baseball game, on August 23, 1989, in the 11th inning at Olympic Stadium while atop the dugout of the visiting Los Angeles Dodgers. Dodgers then-skipper Tommy Lasorda remembers the crowd went nuts. “Youppi was making a racket on the dugout roof!” Lasorda told me. Watch the video of Youppi!’s ejection below.

After the Expos were relocated to Washington, DC, in 2004, Youppi! remained in Montréal to become the mascot for the Canadiens de Montréal NHL hockey team. 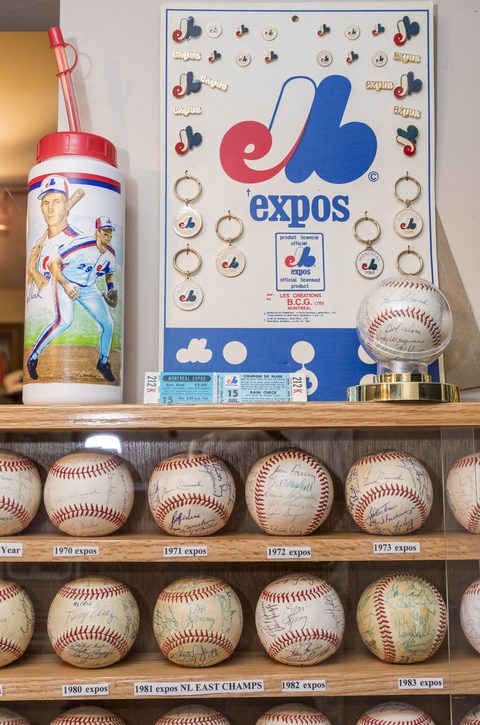 For years people wondered if the Montréal Expos logo was made up of letters representing the initials of original owner Charles Bronfman. In 1985, The New York Times reported, “The logo is composed of three colors – red, white and blue – and three letters: a large stylized ”M” for Montréal, a lower case ”e” for Expos in red, on the lower left of the logo, and a ”b” for baseball in blue on the right-hand side.”

Today, the Montréal Expos logo remains one of the most popular in all of sports.