Why you should be excited about Time Out Market Montréal

While it’s no stranger to new restaurants opening day and night, Montréal is now seeing its fair share of food halls opening across the island this year. These are collectives of chefs and wholly new culinary concepts that combine the quality of fine dining with a fast-casual delivery, a result that turns dining into grand, centralized experiences that do away with eating out of paper bags from franchises. It’s an exciting time for Montrealers who’d call themselves gourmands—and what self-respecting Montrealer wouldn’t? 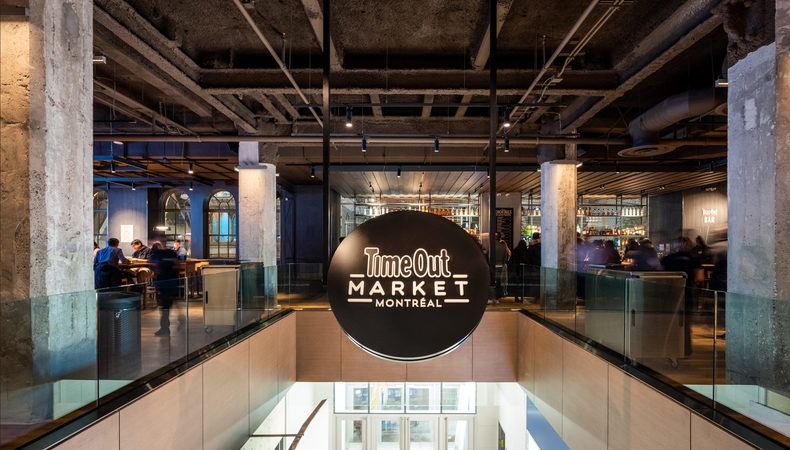 Among all those gastronomical temples, however, there’s one that promises a novel delivery unlike any other, one that uses writers’ and editors’ knowledge of and experience with Montréal as the foundation for what it will offer in food, drink, and culture.

A downtown destination for food and culture

In late 2019, the downtown core’s Eaton Centre will become a major hub for food and culture with the arrival of Time Out Market Montréal. Following in the successful footsteps of Time Out Markets in Lisbon, Miami, New York, Boston and Chicago, this new location aims to be a unique expression of the city’s best talents. No two Time Out Markets are alike, as each collects its respective city’s local talents from across the dining spectrum and gathers them in one place to do what they do best: wow us.

Inside this new address, Montrealers and tourists alike will be invited to grab seats at its long, communal tables to be fed by 16 eateries that have been handpicked by the magazine’s editors, helmed by restaurants they feel—yours truly among them—best represent what Montréal has to offer. That includes as many fine dining options like Club Chasse et Pêche and Montréal Plaza as there are casual ones like Vietnamese street food hotshot Le Red Tiger and Old Montréal favourite Olive et Gourmando. There’s going to be some entertainment too, as the space will additionally feature a demonstration kitchen, a culinary academy for classes in food and drink, retail, and a stage set with local talent.

A culinary concept whose time has come

The idea for this food hall started with the magazine of the same name. It was five years ago when Time Out’s editorial staff in Lisbon came up with a plan to bring its magazine to life, a living, breathing representation of its curatorial abilities. Bringing together chefs and restaurants from around their city, the editors’ and eateries’ collaborative effort created the first Time Out Market, a bellwether location for visitors to collectively celebrate good eating. It’s been a popular destination in Lisbon with a lasting impact ever since, seeing nearly 4 million visitors in 2018.

If you’ve never picked up a copy, Time Out began as a publication that was centered around editorial recommendations for what was the hippest and most happening things to do in London in 1968. The goal: to keep a finger on the pulse of the city and act as a guide to what the best things to do, see, eat and drink were. That has since grown into a worldwide media network spanning 315 cities in 58 countries—Montréal, and Canada by extension, joined them in January of 2019 with the same mandate. Montréal’s first print issue comes out with the opening of the Time Out Market.

If those aren’t all reasons to be excited, we don’t what is.