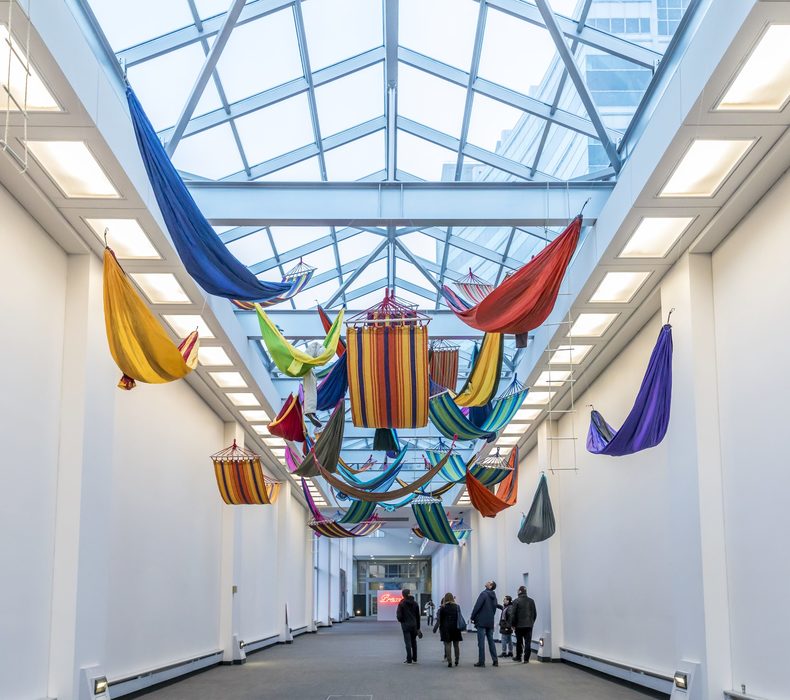 Artists from around the world are showcased in the 2021 edition of Montréal’s Art Souterrain festival during which the city’s famed Underground Pedestrian Network is transformed into a four-kilometre-long contemporary art gallery. A virtual component will be held from February 20 to April 30, while the urban component will take place in the underground city from April 10 to 30.

Founded in 2009, the non-profit Art Souterrain’s mandate is to make contemporary art accessible to the general public. Under the theme “Chronometry”, the pandemic-friendly 13th edition of the festival showcases more than 50 artists and performers presenting contemporary artworks and performances over seven weeks.

The virtual component explores the “Chronometry” theme via a series of online performances and roundtables, while the urban component runs along a four-kilometre route, displaying the art of local and international artists from April 10 to 30.

The 2021 edition of Art Souterrain presents the work of four key artists:

Philippe Aubert-Gauthier and Tanya St-Pierre’s 13-minute video INTERTYPES is the result of a reflection on the cultural significance of 3D printing and its social imprint in the history of printing technologies.

The Online Launch Party (February 20 at 6 pm) will preview the theme, artists and performers at this year’s festival.

Three roundtable discussions on the theme of Chronometry and its variations each feature all-star panelists: À fleur de peau (February 23 at 6 pm) and Opportunités et nouveaux modèles (March 2 at 6 pm) are in French, and Now is the Time (March 9 at 6 pm) is in English.

Performances will also be broadcast every Monday, Wednesday and Friday from March 14 to April 30.

Nuit Blanche Online takes place on March 13, coinciding with the first anniversary of the implementation of health measures related to COVID-19 in Quebec The event will be featuring some 15 artists from BIG BANG under the direction of renowned choreographer and artistic counsellor Stéphanie Decourteille.

Some 30 artists and performers are presenting contemporary artworks and performances related to the theme of Chronometry, in a four-kilometre Art Souterrain route that begins at the Montréal Convention Centre, and continues at the Centre de commerce mondial de Montréal, Place Victoria and the Édifice Jacques-Parizeau.

The urban component works selected by the two curators of this edition – Nathalie Bachand (Canada) and Dulce Pinzon (Mexico) – are accessible free of charge in the safe public spaces of Montréal’s underground city at all times, from April 10 to 30.