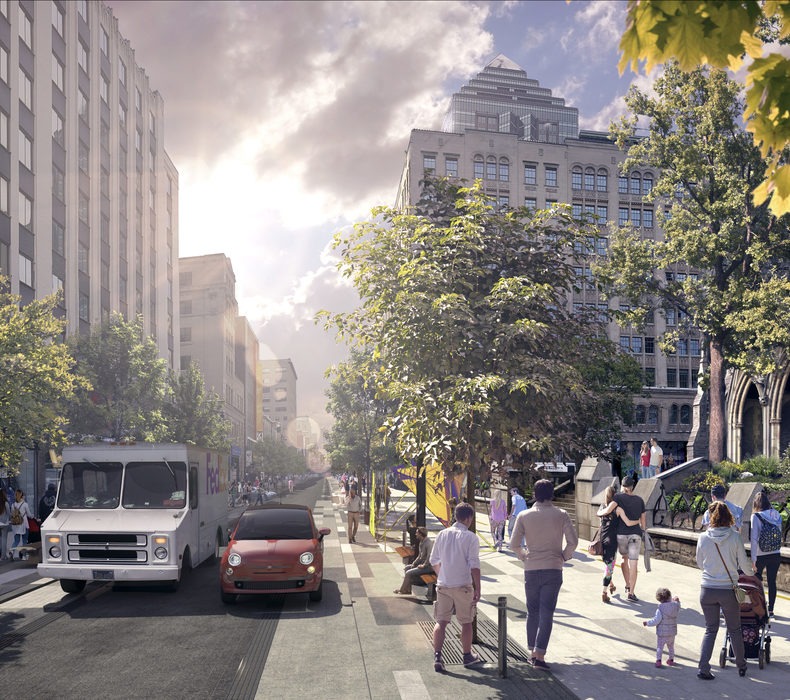 For well over a century, Sainte-Catherine Street has been the main artery pumping much of Montréal’s lifeblood through the heart of downtown. Much more than just Montréal’s main commercial thoroughfare, the venerable old saint is the physical embodiment of the city’s spirit, its history, its pride and plurality. And now she’s getting a much-deserved makeover. For the next several years, the Sainte-Catherine Street development project, in combination with the ambitious remaking of the Place Ville Marie Esplanade, will transform downtown Montréal, ushering in a new era for la belle ville.

Stretching for 11 kilometres across the city from west to east, Sainte-Catherine Street is the longest commercial street in Canada and one of the longest in North America. It’s home to major shopping centres, designer boutiques, an international array of restaurants and bars, historic theatres, beautiful churches and picturesque public squares. Sainte-Catherine Street also hosts the St. Patrick’s Day Parade and other major events that are deeply ingrained in the city’s psyche, like the Festival International de Jazz de Montréal, Les Francos de Montréal and the Just For Laughs comedy festival. For well over a century it’s been the cultural/commercial backbone of Montréal, and now plans are well underway to bring the street up to 21st-century speed while offering a bold and brand new downtown experience.

The driving imperative behind the makeover of Sainte-Catherine Street is the much-needed replacement of crucial sewer systems and water mains, the pipes for much of which date back to the 1800s. The work will extend for 2.2 km from Atwater Avenue in the west (where the Montreal Forum multi-use complex, former home of the Montréal Canadiens, is situated) to just past the Quartier des Spectacles downtown. In addition to the infrastructure work, Phase 1 of the redevelopment of Sainte-Catherine Street will also include the widening of sidewalks, a reduction in traffic lanes, intensive greening, distinctive furniture, intelligent and energy-efficient LED lighting, electric vehicle charging stations and free Wi-Fi. 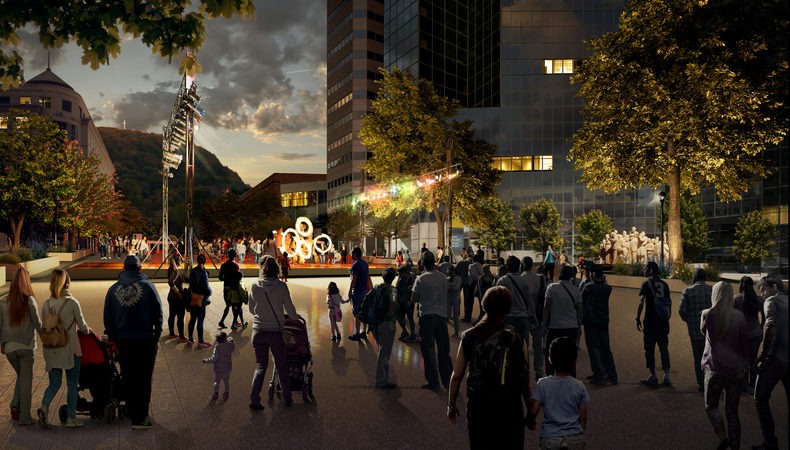 One of the highlights of the new-look Sainte-Catherine Street will doubtless be the creation of Place McGill right smack in the middle of downtown. Extending from McGill University south to the Place Ville Marie Esplanade (which is also getting its own re-do, more about that below), this new pedestrian-friendly public space aspires to be one of the city’s major attractions upon completion. At 12,000 square metres, Place McGill will be three times the size of the historic Place Jacques-Cartier in Old Montréal. It will also be a significant addition the Promenade Fleuve-Montagne, the 3.8-km pedestrian path that links Montréal’s two iconic natural features, the St. Lawrence River and Mount Royal, and which was one of Montréal’s 375th anniversary legacy projects. In addition to Place McGill, the Sainte-Catherine Street redevelopment will also see the reimagining of several other significant public spaces, including Phillips Square, Place Saint-James, Dorchester Square, Place du Frère-André and Esplanade Clark. 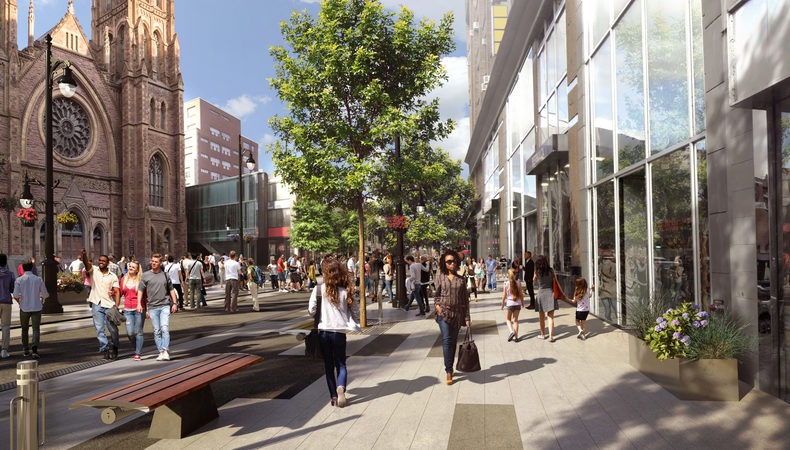 Side walking the walk

“User-friendliness” are two words that come up a lot when hearing about the Sainte-Catherine Street redevelopment project. Pedestrians make up approximately 70% of the street’s current usership, so a pivotal part of the plan is to put the pedestrian experience first: cleaner, greener and more appealing is the goal. In addition to widening the sidewalk by as much as 60% is some places, the street will feature custom-made “urban furniture” and several new and inviting seating areas and terraces. A row of trees will be planted every nine metres in continuous tree wells that are designed to ensure healthy growth. The sidewalks can also be converted into pedestrian-only malls as needed.

Smartening up the street

A big part of ushering Sainte-Catherine Street into the future is turning it into a smart street with the addition of free Wi-Fi, intelligent LED lighting that’s energy efficient, and the application of innovative mobility and smart parking solutions, since the street will also become less accessible to cars and trucks. Indeed, a section of Sainte-Catherine between Mansfield and Bleury streets will be reduced to one 3.5-metre-wide lane, and a total of 144 parking spots will be lost along its length. To assist drivers, the city plans to develop a parking app as well as increase the number of dynamic parking guidance signs to more efficiently direct drivers to off-street parking. Additionally, this new tech will also provide information about traffic bottlenecks, snow removal and the like. 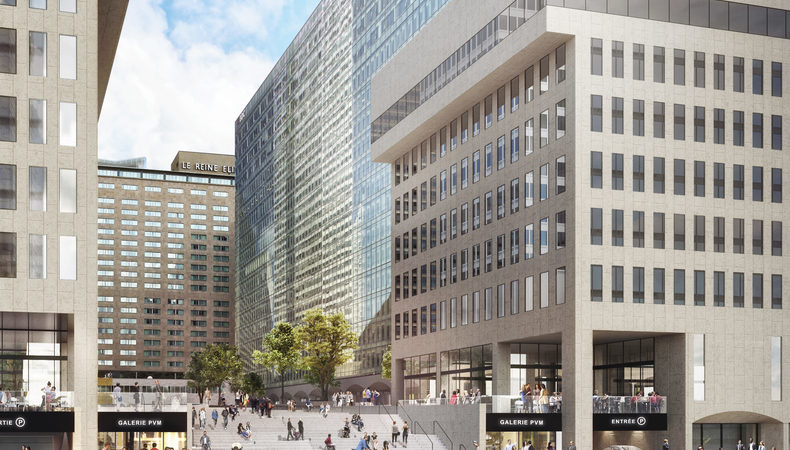 Well, if you’re going to do makeovers, you might as well do all the makeovers, right? Right. In that spirit, Montréal’s Place Ville Marie – the iconic, 47-storey cruciform tower that anchors downtown and is home to the city’s brilliant rotating beacon – will be getting its own $200 million touch-up. The project focusing on its sprawling outdoor esplanade is intended to celebrate Montréal’s creativity and the heritage of Place Ville Marie, in addition to strengthening its role as an economic and social hub in downtown Montréal. Among the transformative changes is the creation of a glass pavilion that will replace the Esplanade’s four existing skylights and offer a striking entrance to both PVM and Montréal’s famed underground city. Following this will be the construction of a grand staircase connecting the esplanade to McGill College Avenue and the aforementioned Place McGill. Which is going to look, in a word, awesome.