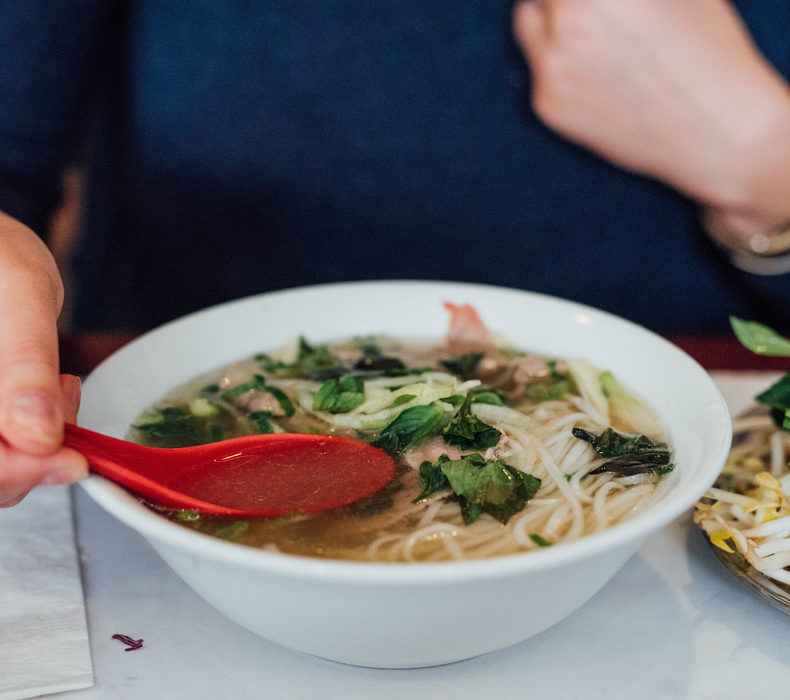 Tonkinese soup, better known as pho, is a beef bone soup that’s been tended to for hours and mixed with a blend of ingredients like ginger, onions, clove and cinnamon. Most often it’s served with noodles, tender slices of beef and a garnish of fresh bean sprouts, Thai basil and lime juice. It’s a warm hug in a bowl from your Vietnamese mother.

With so many great spots for pho in Montréal, it’s quite possible to go on a gastronomic tour of these noodle joints across the city. But to save you the time and stomach real estate, I’m going to give you a rundown of some of the best places for pho, no matter which neighbourhood of Montréal you’re in.

My noodle soup of choice is dac biet pho, usually listed as the house specialty. It’s served with slices of brisket, rare flank steak, tendon and tripe. If you’re way uptown, the spot you must hit is Restaurant Nam Quan, one of the best joints in the city. This literal hole in the wall operates from the basement of a single home dwelling. Quaint and cozy, they start serving tables at 10 a.m.

Duy-Anh is often overlooked, but its beefy noodle soup is the star that shines. This neighbourhood spot offers pho with a view – a large terrasse in the summer offers a view of the busy Saint-Michel Boulevard.

This spot features a wide variety of different kinds of pho, from rare beef to seafood, but the pro move is going for its signature specialty, the chicken Tonkinese soup with lemon leaf. Aromatic and flavourful, this soup is perfect if you’re feeling under the weather. 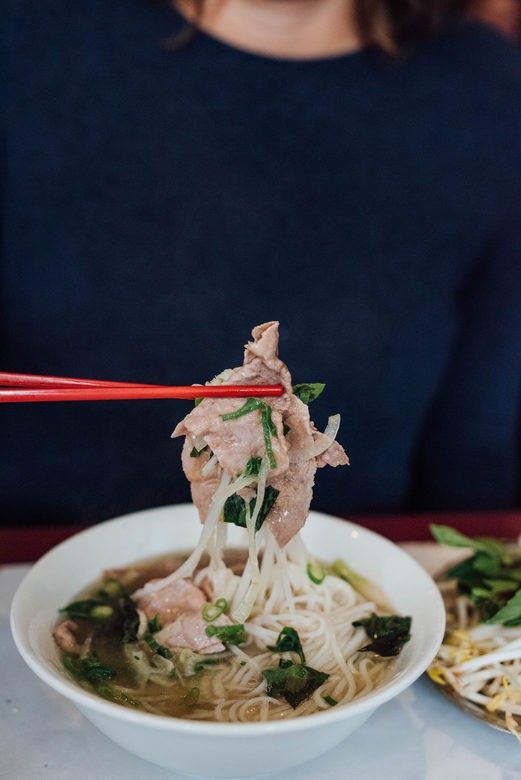 Restaurant Nguyen Phi is one of my favorites. Like most other places, the sizing system is a bit strange. Its pho comes in either a “medium,” “large” or “extra-large” bowl. I’ve given up trying to rationalize it—and quickly forget about it as soon as the soup touches my lips. Nguyen Phi shreds its tripe fine, adding terrific texture and crunch to each chewy mouthful of noodles. Its grilled chicken pho is also fantastic.

Pho Lien is also a happening soup spot just up the hill. It’s the go-to spot for hospital staffers (with the Jewish General Hospital located across the street) and university students looking for a quick bite that won’t break the bank. Toothsome rice noodles swimming in crystal-clear broth deep in flavour is a testament to its success and popularity.

Seng Vang has a small and concise menu, doing just a handful of dishes and doing them extremely well. They’re known for having the ever popular “bún bò hué”, a soup that’s often only offered on Vietnamese menus on weekends (for the laborious cooking process). Sen Vang offers it daily.

This restaurant is known for a variety of specialty dishes like bird’s nest fried noodles, Vietnamese crepe served with chicken, shrimp and fresh herbs as well as beef rolls in vine leaves. But make sure to try its “Hoai Huong soup special”, a noodle soup served with breaded shrimp and pork. 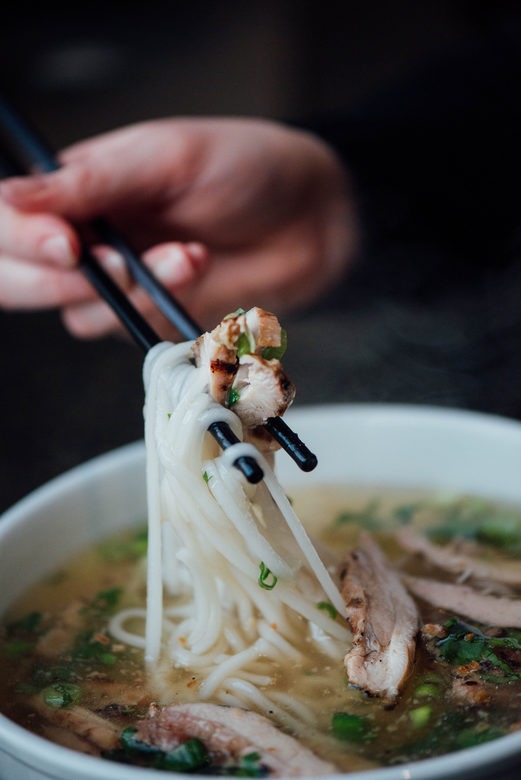 If a pho craving should strike you in the Rosemont-La Petite-Patrie borough, Restaurant Pho Tay Ho is where you should go. Instead of dac biet, the specialty here is chicken pho. It comes with generous slices of poached chicken in an aromatic chicken bone soup, but there is an option with both chicken and beef in the same bowl.

Pho Mymy is Montréal’s own Vietnamese restaurant chain. With multiple locations, its growing popularity is a testament to the quality of its food and consistency. Bú bo Huê is available daily.

In the Plateau, check out Hà Restaurant for a great Southeast Asian-inspired menu. Hà Restaurant celebrates the spirit of Bia Loi, a Vietnamese street corner watering hole that serves quick bites. It doesn’t necessarily specialize in Tonkinese soup, but it does serve a delectable beef pho—it’s the only type on its menu. The deep broth is accented by aromatic flavours and is served with raw slices of ribeye over thick rice noodles. There is now a location in the Old Port as well.

“Den” means “black” in Vietnamese, like “black sheep” – the one that stands out. This chic Vietnamese restaurant located in Little Italy is a popular spot for cocktails and snacks and isn’t your typical noodle shop. The signature pho is Mama Vu’s secret recipe - as is most of the menu offerings. 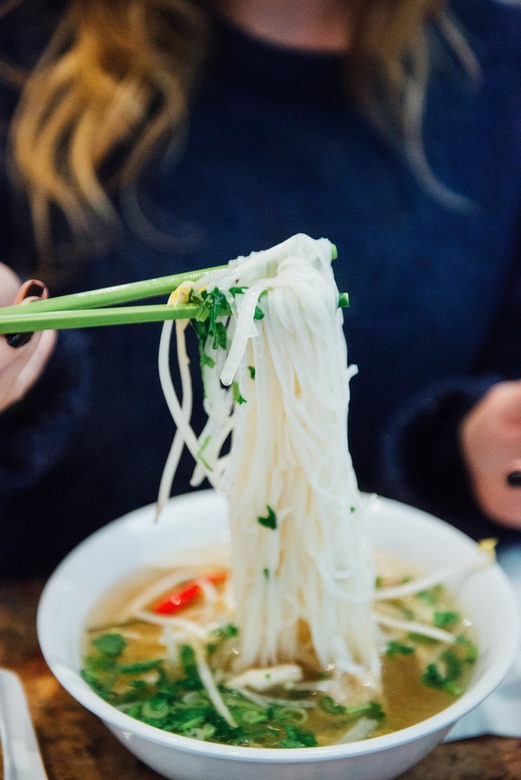 Pho Bang New York is your best option in the downtown/Chinatown area. Its soup is richer in earthy spices and highlighted by the generous greenery of basil, scallions and cilantro. Large communal dining tables add to the intimacy as you devour your steamy bowl of noodle soup. The traditional and hearty dac biet hits the spot after a day of walking through Chinatown or the Old Port.

My-Canh offers classic Vietnamese dishes, but it’s its specialty noodles that stand out. A visit here isn’t complete unless you slurp the pork and seafood soup or the delicious “Bún Mam” – rice vermicelli soup with fermented fish.

One of the oldest Vietnamese restaurants in Chinatown, Pho Bac has been serving up steaming bowls of hot noodle soup for over 15 years! Generous lunch specials are available, which include fresh spring rolls and vermicelli bowls with grilled chicken, pork or beef. 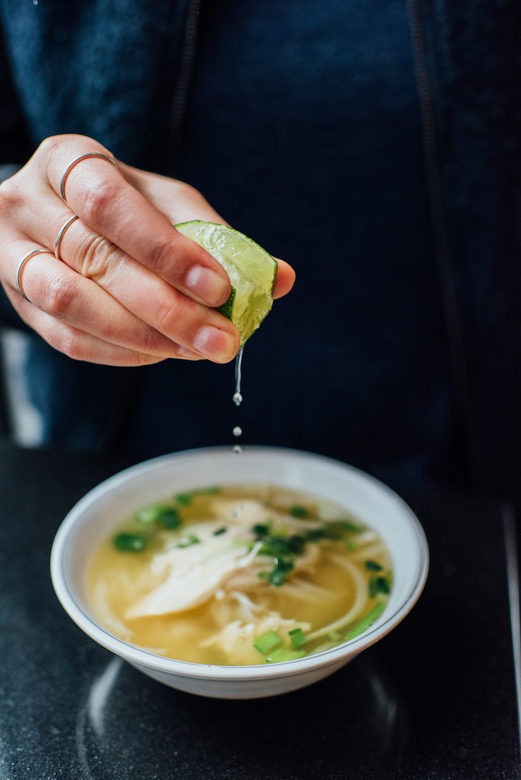 This restaurant is popular amongst the locals in the Southwest borough of Pointe-Saint-Charles. Owner Lise grew up in the restaurant business and wanted to bring her family background in serving fresh and authentic Vietnamese dishes to the masses. With four locations (including one in Brossard), make sure to check out the grilled meat plates or exotic salads.