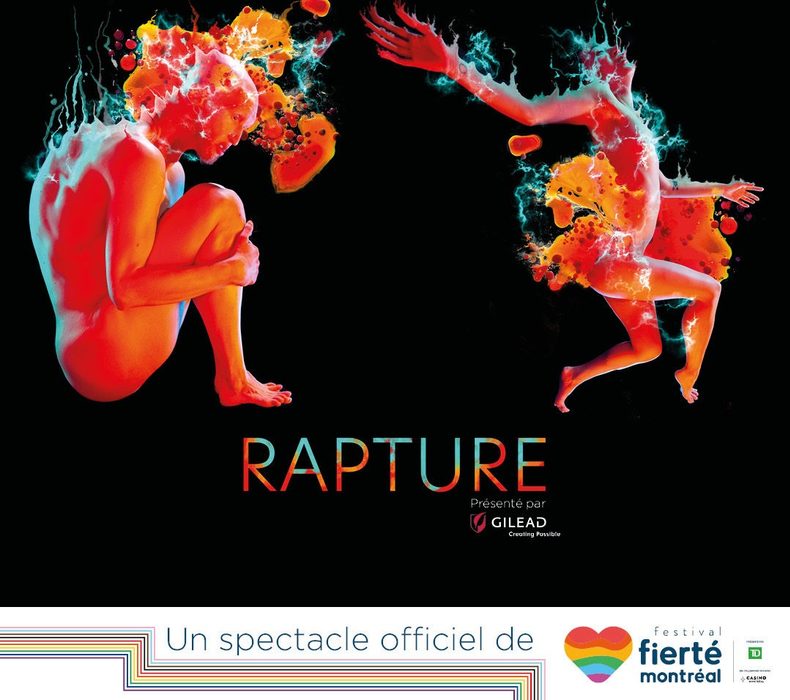 Montréal Pride presents Rapture by renowned choreographer Dave St-Pierre, a tribute to the millions of people who have tragically died of AIDS. Rapture is being presented during the 24thInternational AIDS Conference being held July 29 to August 2 in Montréal, and as a prelude to the Montréal Pride Festival which runs from August 1 to 7.

A tribute to the millions of victims

Inspired by playwright Tony Kushner’s Pulitzer- and Tony-winning Angels in America and the critically-hailed British TV series It’s A Sin, Rapture is an atypical contemporary dance work created by St-Pierre in close collaboration with 10 performers-creators, and a collective of artists.

Rapture showcases 10 performers on stage in a tribute to the millions of people who have tragically died of AIDS. The show intertwines touching confessions of people who continue to fight against serophobia, HIV, homophobia and societal hostility towards people living with HIV/AIDS.

When the 5th International AIDS Conference was held in Montréal in June 1989, the New York founding chapter of the AIDS Coalition to Unleash Power (ACT UP New York) drove up to Montréal by bus for the conference. Joined by Canadian activists from AIDS Action Now! and Réaction-SIDA, some 300 protesters stormed the stage at the opening ceremony. The activists would publish the historic Montréal Manifesto, an international bill of rights for people living with HIV/AIDS.

An International AIDS Society report sums up the impact of the 1989 Montréal conference: “Activists occupy centre stage during the conference: Canadian activists protest the lack of a federally-funded AIDS strategy, US activists denounce the US entry ban for people living with HIV, and both want a greater involvement in the conference. During the same conference, Zambian President Kenneth Kaunda reveals that his son died of AIDS in 1986, becoming the first African leader to speak about AIDS in his own family.”

Says Montréal Pride Executive Director Simon Gamache, “This event was marked by a social mobilization on the floor of the Palais des congrès that initiated a transformation of the relationship between medicine and society. The voices of patients could no longer be ignored by scientists.”

Gamache adds, “Rapture blends commemoration, pain and resilience to remind us of the remarkable advances of the past 33 years. Dave St-Pierre and many talented artists are joining forces with Montréal Pride to present conference delegates and Montréalers with events inspired by the pain of those affected, the mobilization of activists, and the dedication of researchers.”

The 24thInternational AIDS Conference runs from July 29 to August 2 at the Palais des congrès. AIDS 2022 will convene 15,000 participants – leading scientists, policy makers and grassroots activists – both in Montréal and virtually at the world’s largest gathering on HIV and AIDS.