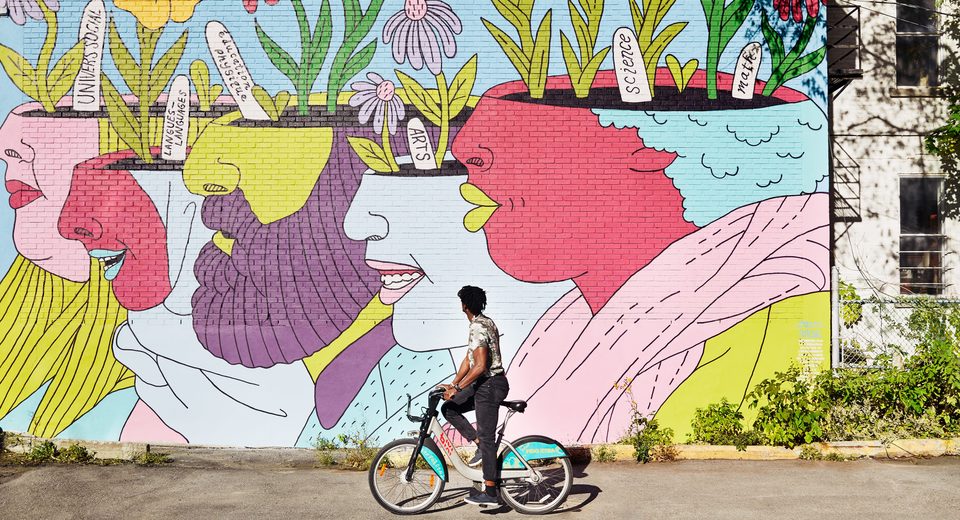 Blossoming Montréal murals to get you in the mood for spring

In the springtime, Montréal becomes a colourful canvas of blossoming flowers and sprouting greenery. But nature’s hues and magnificence not only appear in parks and green spaces, but also on the city’s walls. Take a stroll and see the beauty of spring in some of Montréal’s flowery murals.

Gleo headlined the Mural Festival back in 2019 with a wall in the Milton Park area that became part of the city’s public art collection. Born in Cali, Colombia’s cultural hub, Gleo has been representing South American art in cities across the world. The yellow eyeballs and incorporation of flowers are signature elements, and the colour palette on this wide-scale piece brings life to the otherwise dull parking lot. Her work was incorporated to the festival’s website, flyers, posters and merchandise for the edition she took part in.

Instinct by Fvckrender and Jeremy Shantz

Frédéric Duquette is a Montréal native and self-taught digital artist who collaborated on a wall next to the massive Leonard Cohen piece last summer during a very different edition of the Mural Festival. He has blown up over the last years, creating a new image on the daily and has worked with notable musicians and brands.

This was the first time one of his digital works was converted into a mural with the painting being done by Jeremy Shantz, whose 2018 wall still exists further up Saint-Laurent Boulevard. When I asked Fvckrender ast year if he did any of the physical wall work, he said, “I just did the digital design, I can’t paint!” The piece was done as he saw that society was blooming during the chaotic summer of 2020, and this was a perfect time for a blossoming flower piece.

Maxilie Martel’s works have hit the Montréal cityscape in full force over the last few years, and she has repped our city with murals in Western Canada. I was able to snag one of her baseball caps created in collaboration with Le Cartel a few years back. In 2020, she presented her thesis with amazing clay and glaze piggy bank sculptures displayed mainly virtually… because of you know what. The year 2020 is also when she completed her “Secret Garden” piece close to Laurier metro station. It’s so playful, colourful and screams springtime and the mesmerizing Flowers Song from “Alice in Wonderland”. Her pieces are the type that you can stare at for long periods of time, discovering new details in the extremely diverse characters she paints. She is one of my favourite local artists right now.

Breath of Spring by Phillip Adams and David Guinn

This wall celebrates a decade of brightening up the Habitations Jeanne-Mance complex this year. Adams and Guinn had the spring piece go up as part of a series of seasons that were created in the social housing complex rich in mural art, sculpture and installation works.

It really depicts what we Montrealers do best when the warmer weather rolls out: we roll out to our parks for picnics and park hangs. The almost dizzying horizontal lines are to capture the movement of the passer-by using the Claire-Morissette bike path, the sidewalk or De Maisonneuve Boulevard.

Nikki Küntzle for Mural and FAE

In 2019, the Fédération autonome de l’enseignement (FAE) celebrated its 10th “Semaine pour l’école publique” (Public School Week). They collaborated with the Mural Festival and multidisciplinary artist Nikki Küntzle to have this wall painted. Nikki sees free education and public schools as the first steps to bridge gaps between diverse student bodies, and the opportunity to learn from and with one another. The flowers blooming in the minds of each of the different characters painted in this enlightening work represent different school subjects and thoughts blossoming.