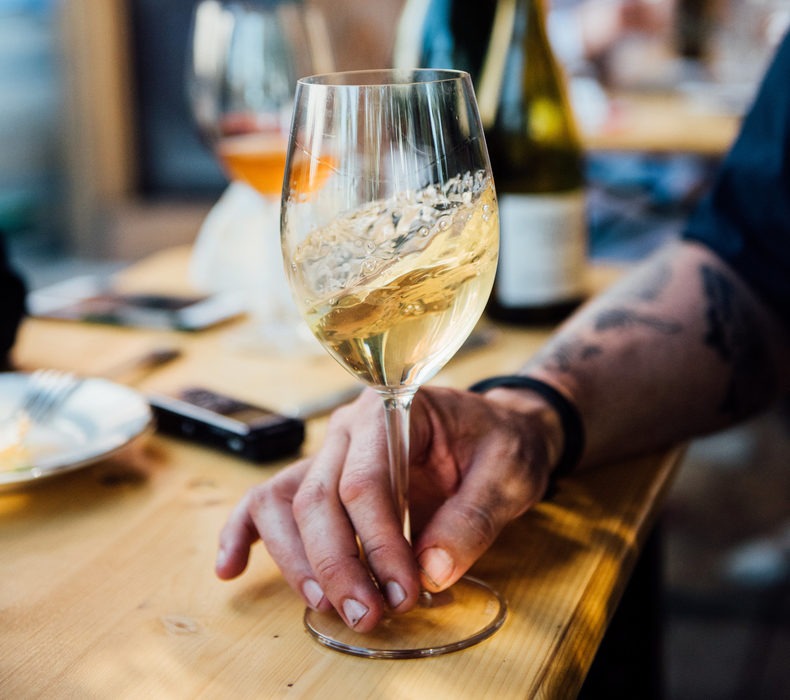 Your guide to Montréal's BYOW restaurants

When someone asked for a BYOW recommendation in Montréal a few years ago, only a handful of restaurants would come to mind. These days, the BYOW restaurant scene in Montréal is quite expansive and includes a large selection of neighbourhoods, price points, ambiances and cuisines. We’ve compiled a list for you ranging from French to North African cuisine. 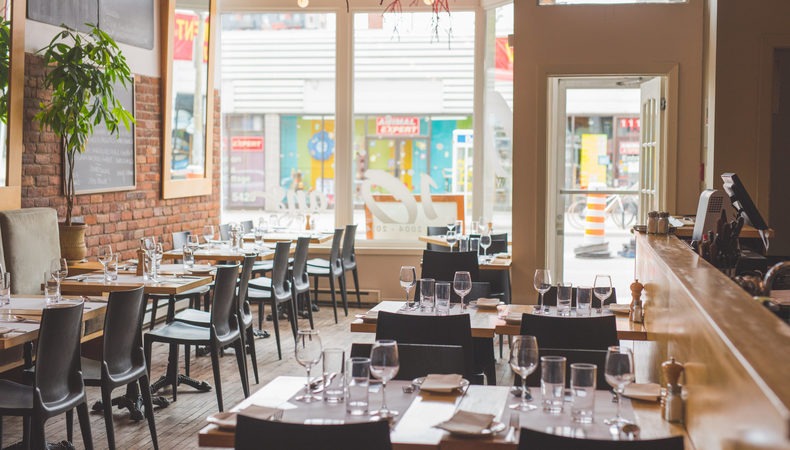 Downtown and the Village

This fabulous restaurant situated in The Village is often at the top of Montréalers’ BYOW list. The menu is built around local and seasonal ingredients. O’Thym also serves brunch on the weekends. Reservations are recommended.

For a BYOW that’s a little higher-end, Carte Blanche 2.0 is a great option. The French cuisine inspired dishes will please everyone. The foie gras crème brûlée is a must! 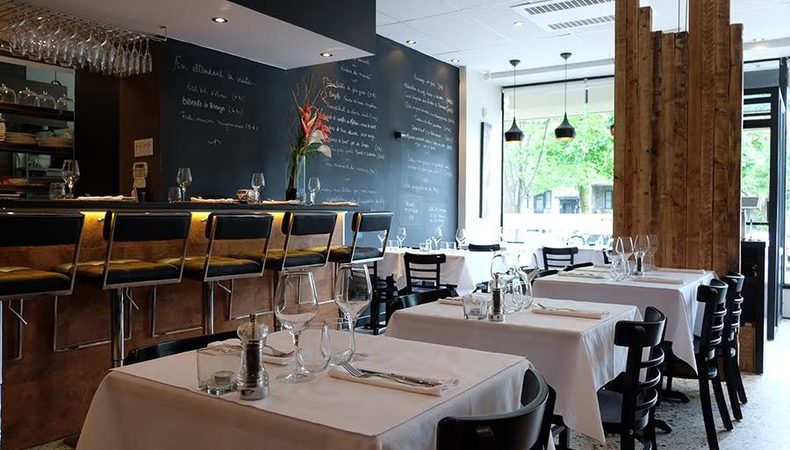 Little Italy, Villeray and North-East of the Island

Located in Villeray, Tandem serves a creative cuisine rooted in the French tradition and based on seasonal market produce. Not sure what wine to bring with you? Call the restaurant and they will help you pick a bottle that pairs beautifully with your meal.

Self-dubbed the “first pizzeria in Montréal”, this unassuming Italian trattoria set up shop in what used to be a small bar where Italian immigrants would unwind and play cards after work. Napoletana serves wood-fire oven pizzas and an extensive selection of antipasto.

Located on booming Fleury Street, Le Millen offers a market fresh menu inspired by French cuisine and based on seasonal and local Québec products in a very colourful and cheery décor.

La Rose des Sables’ décor is worthy of a thousand and one nights. Tajines, and a selection of traditional Tunisian Ojja dishes will definitely transport you to the Mediterranean for an unforgettable evening of exotic flavours.

Found in the Little Italy neighbourhood of Montréal, this tiny hidden gem has quite a following. Chef and Tenor Davide Bazzali sings opera while he cooks your food.  Talk about multi-tasking. Homemade pastas are on the menu as well as meat and fish dishes. Brunch is served on weekends. 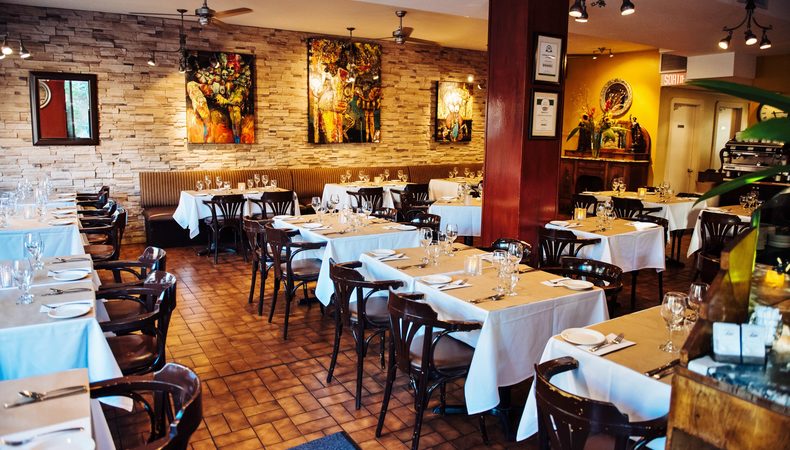 La Khaima, found in the trendy Mile-End of Montréal, will take you on a journey to North Africa with its spice-filled flavours of Morocco and Mauritania.

La Prunelle opened in 1999 on popular and quaint Duluth Street in the Plateau Mont-Royal. The bistro-style menu includes dishes such as boudin, veal sweetbreads and a lemon cream with meringue.

How about duck confit for dinner followed by profiteroles for dessert? Le Margaux’s cuisine is based on traditional French dishes and is a favourite with Montréalers.

Situated in the Plateau, this restaurant is open seven days a week and is perfect for a romantic dinner or a meal with friends. Monsieur B’s French cuisine influenced menu changes with the seasons

For a fun and delicious evening, La Raclette is at the top of the list. This restaurant has been serving traditional Alpine dishes such as raclette and Swiss cheese fondue as well as other European influenced dishes since 1985.

Located on pedestrian Prince Arthur Street, Le Square has been offering a French bistro cuisine to Montréalers since 2010.

Le Quartier Général, in the trendy Plateau area, is a casual French inspired restaurant highlighting products from Québec. Open seven nights, this place is perfect for an intimate tête-à-tête.

A charming neighbourhood bistro, Le P’tit Plateau serves a regional French cuisine that has garnered them a loyal clientele. Call the restaurant to find out what the daily menu is in order to choose your wine.

Hochelaga-Maisonneuve’s Bagatelle is a favourite among BYOW seekers. A French cuisine influenced menu offers dishes such as foie gras, tartares and filet mignon. Brunch is served on the weekends.

Les Canailles found in the east end of Montréal, offers an unpretentious Mediterranean-inspired cuisine in a relaxed ambiance. Try the grilled octopus or their famous foie gras burger.

Some of the same people that are behind popular Le Quartier Général are also behind État-Major, a trendy Hochelaga Maisonneuve bistro serving French classics while focusing heavily on Québec products.

Asian-inspired and reasonably priced, Coba, located in Outremont offers dishes ranging from sushi to the classics such as General Tao and Pad Thai. 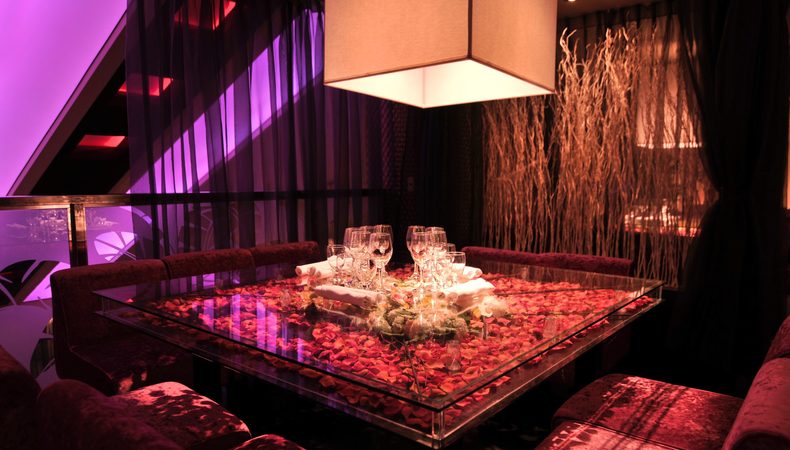 Kyomi has been offering fusion Asian cuisine since 2008. Located in Lasalle, the local favourite can accommodate groups of up to 300 people, but also caters to intimate dinners for two. Their menu ranges from sushi to teriyaki dishes to delicious tartars.

Found on popular Wellington Street in Verdun, this BYOW restaurant has been around since 2012 with delicious Québec-influenced cuisine and impeccable service.