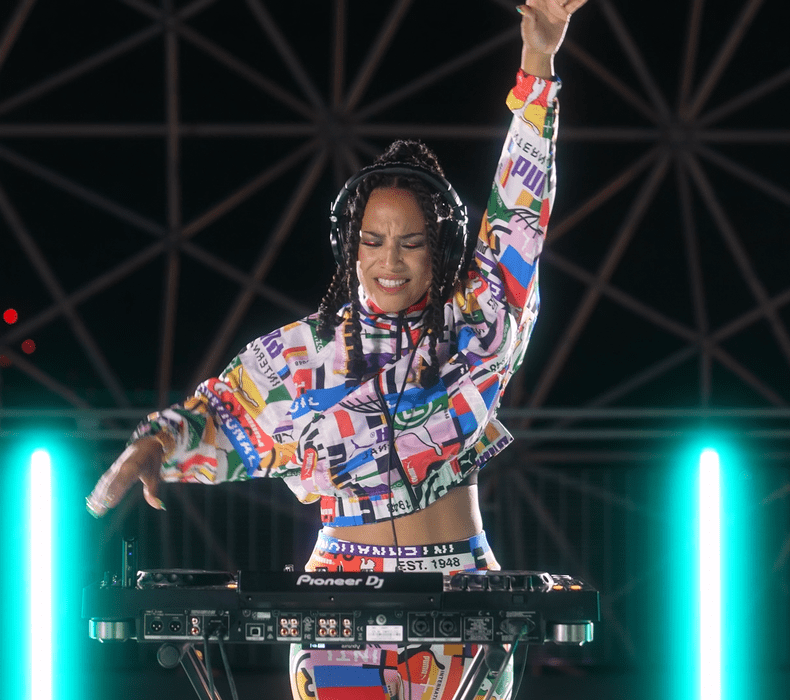 DJ Karaba moves to the rhythm of Montréal!

When it comes to her music, DJ Karaba’s wishes are simple. “The main thing for me is always to make people dance,” she says. “Even if it’s just a head bop, or a shoulder thing, I just want people to naturally want to move a part of their bodies.” While talking about it, she smiles widely and dances herself.

Relocating to Montréal at the age of 7 from France, Karaba considers herself “a true Québécoise” and Montrealer, a flavour reflected directly in her music. “This city is mine, and I’m going to really celebrate that through the music I play and the places where I grew up that are symbolic to me,” she says. As a young, professionally trained dancer in the city, Karaba’s upbringing was one marked by local culture and music. Raised in a musical household filled with the sounds of Motown, Marvin Gaye and music from her father’s birthplace the Congo, Karaba remembers her Montréal youth as a “big bowl of music.” In exploring both the local Afrobeat and rap québécois (or rap québ for short) scene, Karaba’s foundational listening included local heroes Muzion and Sans Pression and her attentions shifted towards DJ’ing as a primary artistic outlet. Now she no longer dances on her own, but gets club and festival audiences dancing along with her.

Presently wintering in Los Angeles, Karaba already eagerly awaits her return to the city. Both the Gay Village and the city’s eastern areas feel most at home, and she feels a particular affinity with up-and-coming neighbourhoods like Hochelaga. “It’s my favourite neighbourhood,” she says. “You have musicians, young families and people don’t take themselves too seriously in the east!”

When asked what she misses the most about Montréal when she’s away, she’s quick to answer. “I miss the language! There’s something about the language that feels very homey and is so specific to this little province,” she says. She also looks forward to hitting her local favourite spots Le Belmont, Bar Pamplemousse and the riverside beach and boardwalk of Village au Pied-du-Courant. “It’s a very cool place,” she says. “Very laid back.”

Clearly a believer that breakfast is the most important meal of the day, she adds, “One thing about Montréal is that we have the best breakfasts.” She even holds fond memories of one of her first jobs working at Dame Tartine, a popular brunch spot amongst locals. Clearly piquing her appetite, she also mentions Montréal’s rich and second-to-none Haitian food scene. Lucky for us all, Montréal also offers the perfect way to work it all off. “The fact that you can walk anywhere is something I love about Montréal. I love to just walk and listen to my music – it’s just so nice!”

And speaking of music, DJ Karaba’s latest single 'Roots', an unshakable groove sure to soundtrack the spring inspired by South African amapiano, just dropped on all streaming platforms. “I called it ‘Roots’ because it was like a return to Africa for me,” she says. “I feel very proud and I think it’s a track that’s going to make people dance, and that’s always the goal with me.” And just like with the rest of her music, there’s no doubt we’ll all continue dancing along.