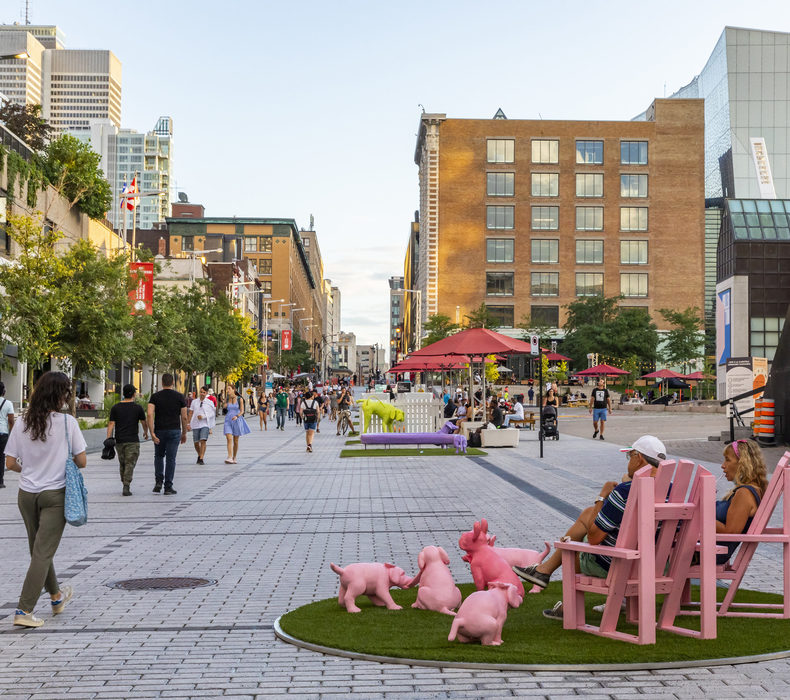 10 reasons why you should visit downtown Montréal

Please note that, due to the heightening of sanitary measures, entertainment activities, including ambulatory activities, in downtown Montréal have been suspended as of Monday, September 21. Pop-up events and performances, particularly the “Cabaret ambulant” (roving cabaret), are therefore cancelled.

There are hundreds of reasons to make downtown a destination any day of the week, but here are our top-10, from cultural activities and pop-up entertainment to reimagined green spaces, city sights and more fun. 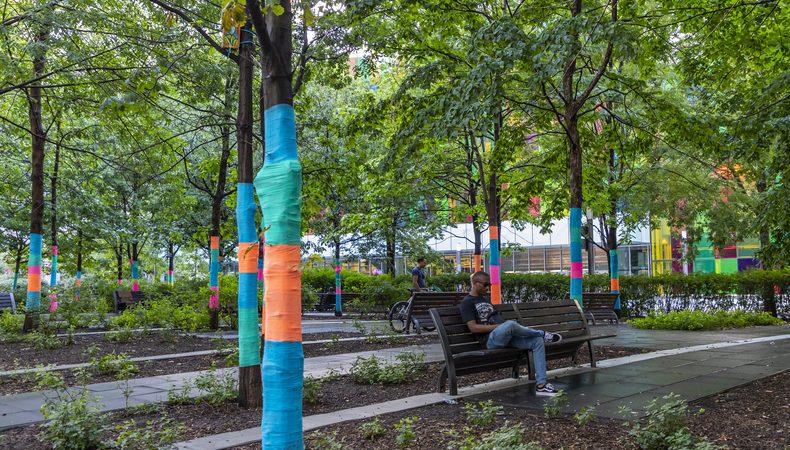 This summer, downtown Montréal is reimagining summer in the city. Inspired by downtown's vibrancy, 150 artists have created art installations and mobile shows for various locations. Keep an eye out for Placott’arts artistic relaxation stops, created by Montréal artists and designers, presented in collaboration with arts collective MASSIVart. Stop by for a drink and pop-up entertainment on weekends at Jardins Gamelin next to Berri-UQAM metro station. Watch the Orchestre symphonique de Montréal's social networks for where its outdoor Summer Neighbourhoods performances might pop up. And see the city differently on Portrait Sonore’s self-guided musical soundwalk, featuring architecture, public art, Expo 67 and more.

2. Green spaces around every corner

Along with the reopening of Jardins Gamelin at the entrance to the LGBTQ+ Village, downtown is boasting large new terrasses and public squares with cultural programming, background music and spontaneous performances. Among them, visit Place des Festivals, the Centre St Jax Garden, Place d'Youville and La Pépinière's pop-up at the corner of Saint-Laurent Boulevard and René-Lévesque Boulevard. If you're biking around downtown, take a rest at urban green spaces like Phillips Square on Sainte-Catherine Street next to the Birks flagship store and Dorchester Square – Place du Canada across the street from the impressive Sun Life Building and Mary Queen of the World Cathedral. 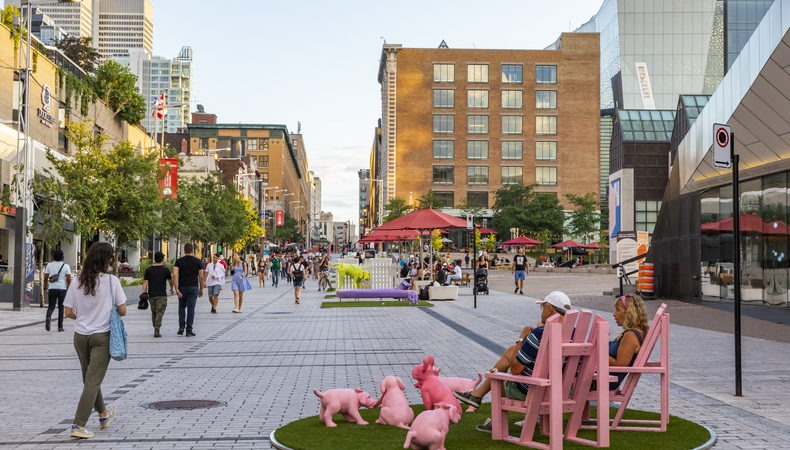 Watch for the animated architectural projection of EN FORME!, celebrating the joys of summer in Montréal, on the facades of the Grande Bibliothèque, UQAM's Pavillon President-Kennedy and adjacent to the Saint-Laurent metro station, also where you can see MAPP_MTL's Messengers of Hope projections. 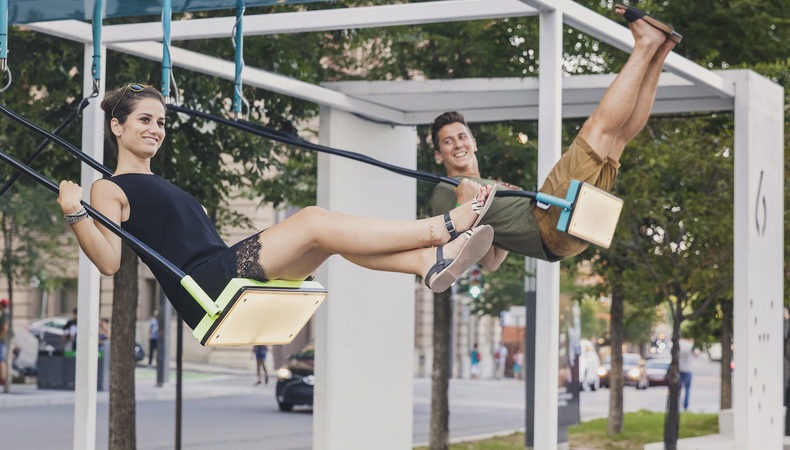 5. Musical swings and art in the summer air

One of the sure signs of summer is 21 Balançoires (21 Swings) on Président-Kennedy Avenue, a colourful and modern swing set that's actually an art exhibition. Swing and you'll hear a few notes of music – swing in concert with others and you'll be treated to an orchestra of original sounds. After August 20 along Président-Kennedy Avenue, don't miss multimedia exhibition Un coeur nomade, honouring Dany Laferrière’s literary career.

Montréal's many terrasses are always a highlight of summer. Downtown, rooftop patios at Foodlab and Renaissance Montreal Downtown welcome guests for dining and drinks. Among other hotel terrasses, check out Sofitel's elegant restaurant Renoir and heritage site Le Mount Stephen's Bar George. Casual and tucked away, Café Parvis and Bar Furco have patios behind St. James United Church. Sip sake and eat well at Biiru izakaya. For fresh and creative vegan fare in a picturesque setting, the lovely front patio of LOV de la Montagne is the place to settle. And Haitian restaurant and cocktail bar Agrikol, with its vibrant patio, has become a Village staple. Check out these other foodie hotspots downtown, including gourmet food to go at Marché Artisans at Fairmont The Queen Elizabeth  and great Chinese food, pho, ramen, sushi, banh-mi and more in Chinatown, near Concordia University and beyond. 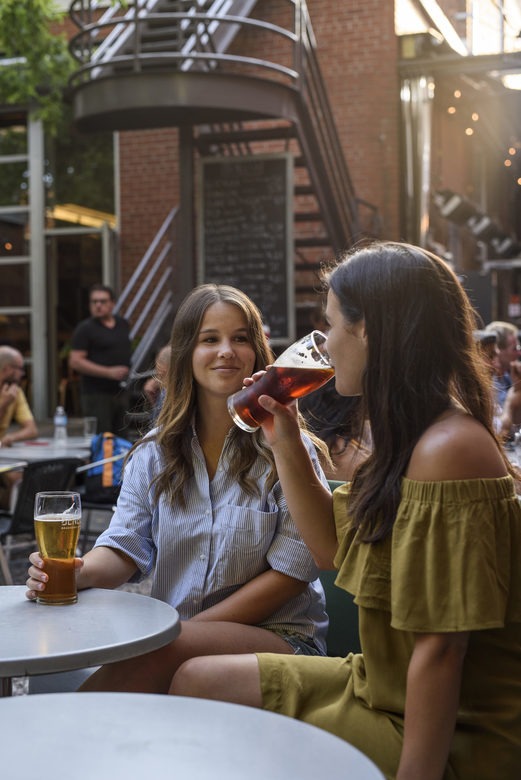 Downtown also features some of the best microbreweries in Montréal. Grab a Hopfenstark brewery pint and a bite to eat at Station Ho.st on Ontario Street just north of the Village, or at nearby Le Cheval Blanc, a laid-back bar that's also a Montréal brewpub pioneer. BENELUX brasserie artisanale on Sherbrooke Street West serves up delicious beer and snacks for all tastes. Another tried-and-true locale, l’Amère à Boire on Saint-Denis Street has its own house beers, while nearby Le Saint-Bock offers an array of on-tap beers and private imported bottles. And Crescent Street mainstay Brutopia boasts local brew and entertainment on its terrasses.

With more than 500 masterpieces by Degas, Monet, Dufy, Friesz and many more famed influential artists, Paris in the Days of Post-Impressionism: Signac and the Indépendants is on at the Montreal Museum of Fine Arts – be sure to book your tickets online for an exact date and time for your visit. At the Musée d'art contemporain de Montréal, explore 1980s painting in Canada in exhibition Painting Nature with a Mirror, 40 years of moving image art in Points of Light, and social and political video work The Column by Adrian Paci. Among the many places to go gallery hopping downtown, La Guilde on Sherbrooke Street presents both modern and historic First Nations and Inuit art and fine craft. And go gallery-hopping downtown.

Enjoy even more cultural and historic must-see summer exhibitions downtown at the Montreal Museum of Fine Arts and Musée d'art contemporain as well as at the McCord Museum, currently featuring photographer Robert Walker’s Griffintown, retrospective Chapleau, Profession: Cartoonist and Wearing Our Identity – The First Peoples Collection. Outdoors along McGill College Avenue, check out Go Play Outside!, photographs from the 1870s to the 1990s and the Urban Forest on Victoria Street, and use the museum’s app to take a self-guided tour of historic sites.

Take a play-break indoors downtown, whether it's raining out or you need a dose of air-conditioning. Play a round of glow-in-the-dark mini-golf at Putting Edge, where new health and safety regulations are in place as they are now with many indoor game spaces in the city. Over on Saint-Denis Street, play retro video games at Arcade MTL. And every Saturday night dance to the beat of SAT's Dômesicle parties, open to 50 people at time, in partnership with Montréal music pros like MUTEK and Never Apart.